Towards the end of August, a new dual GPU graphics card from PowerColor was fully detailed. The dual GPU Devil 13 graphics card combined two AMD Radeon HD 7970 GPUs onto a single PCB with factory overclocks and a custom cooler. The 6GB (3GB per GPU) HD 7990 6GB Devil 13 is an awesome card, but comes with a hefty $999 price tag.

This month, PowerColor has taken the wraps off of a (slightly) cheaper 7990 graphics card that is not clocked as high but uses a similar custom cooler as the Devil 13. It will allegedly be priced at around $900 USD.

The new PowerColor HD7990 (sans Devil 13 branding) features two HD7970 Graphics Core Next (GCN) based GPUs  clocked at 900 MHz by default or 925 MHz when using the factory overclocked BIOS. (You can switch between the two modes by using the Dual BIOS switch.) As a point of comparison, standard Radeon 7970s have a reference clockspeed of 925 MHz, and PowerColor’s own HD 7990 Devil 13 is clocked at either 925 MHz or 1 GHz depending on BIOS switch position. PowerColor is likely binning 7970 GPUs that don’t quite make the cut as Devil 13 models for this new dual gpu 7990 graphics card with lower clockspeeds.

Fortunately, the memory clockspeed has not been downclocked on the new HD 7990. Each GPU has 3GB of GDDR5 memory on a 384-bit bus, and the memory is clocked at 1375 MHz.

Also good news is that the standard PowerColor 7990 appears to use the same custom cooler as the Devil 13 – but with an all-black design rather than the red and black color scheme. That includes a triple slot design, numerous heatpipes and fins, and two 92mm fans on either side of an 80mm fan. 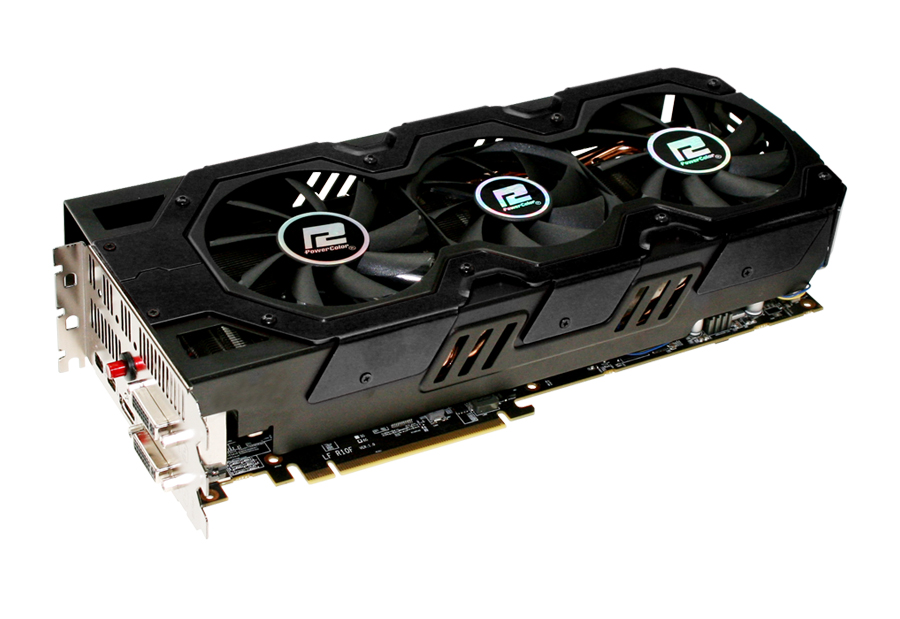 The graphics card measures 315mm x 140mm x 60mm and features two DVI, one HDMI, and two min-DisplayPort video outputs. It has the same 850W minimum system power requirement as the Devil 13, and is powered by three 8 pin PCI-E power connectors in addition to power from the PCI-E 3.0 x16 slot.

Although an interesting card that is sure to attract enthusiasts, it lends credence to the idea that AMD is not going to release its own reference HD 7990 after all. At this point, so long as your case and motherboard permit, it would likely best to go for two individual ~$400 Radeon 7970 GHz Edition cards in a CrossFire configuration. PowerColor does seem to have you covered if that’s not an option for you though there is no word on exactly when this graphics card will be available – or what the final pricing will be.