Last week, Samsung flew myself and a few of my fellow peers in the storage review community out to Seoul, Korea. The event was the 2012 Samsung SSD Global Summit:

At this event, Samsung officially announced their new 840 Pro, which we were able to obtain early under NDA and therefore publish in concert with the announcement. The 840 Pro was largely an incremental inprovement over their 830 Series. Newer, faster flash coupled with a higher clocked controller did well to improve on an already excellent product.

As the event closed, we were presented with the second model of the lineup – the 840. This model, sans the 'Pro' moniker, is meant more for general consumer usage. The first mass marketed SSD to use Triple Level Cell (TLC) flash, it sacrifices some write speed and long-term reliability in favor of what should become considerably lower cost/GB as production ramps up to full capacity. TLC flash is the next step beyond MLC, which is in turn a step after SLC. Here's a graphic to demonstrate:

This graphic depicts the number of voltage levels which can be programmed to an individual flash cell. Packing more bits into a cell enables die size to shrink for a given capacity, as there are fewer cells necessary to store a given volume of data. The down side is that transitioning from SLC – MLC – TLC requires setting the voltage of a given cell to a greater precision with each iteration. This loosely translates to slower 'program time' (i.e. lower write speeds), as well as lower long-term endurance of the flash memory as a whole. Cell leakage is a consequence of wear, and the same amount of leakage will cause more bit rot on TLC as it would with MLC. Samsung claims to have taken care of the endurance part of the equation with greater overprovisioning, but even so they have reduced the warranty period of the 840 down to 3-years from 5 of their 840 Pro. This review will hopefully shed light ont the first potential issue – write speeds.

As we received an advance sample of the 840, sans packaging. I was able to snag this at the Summit. This shows both the 840 (non-pro) and the 840 Pro: 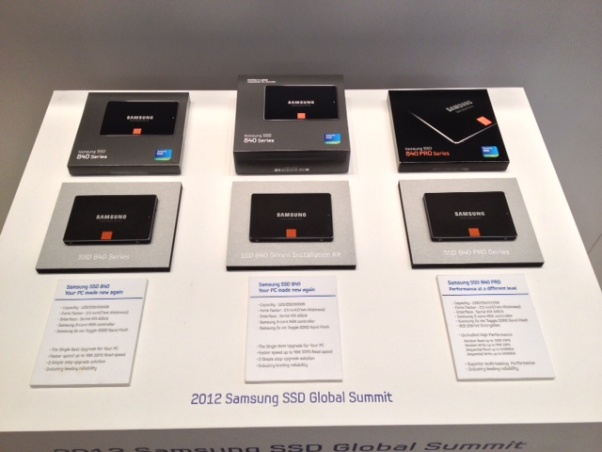