As with earlier wired tests, we’re testing network performance directly with a crossover cable between the LAN and WAN box as well as with CAT6 cables through the Apple Airport as a baseline to compare the wired networking performance of the ASUS WRT-N56U router to.  Just to add something extra to the mix, we’ll also throw the results from our wired testing of the ASUS RT-N66U in as well to see how well the $99 ASUS router stands up to its $169 big brother. 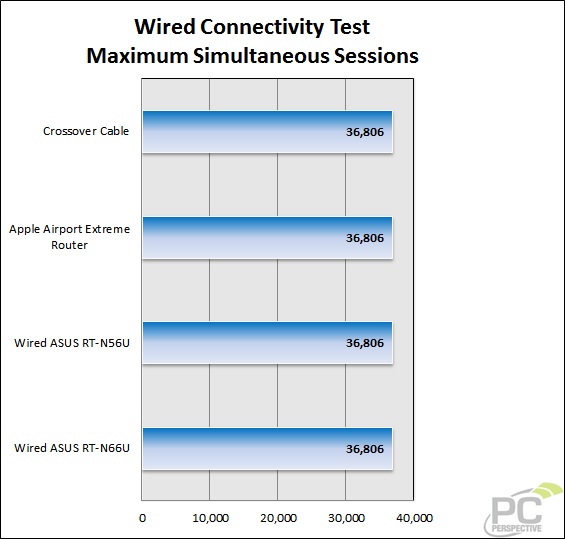 No surprises with the Maximum Simultaneous connections test.  The WRT-N56U matched all our other tests with 36,806 sessions. 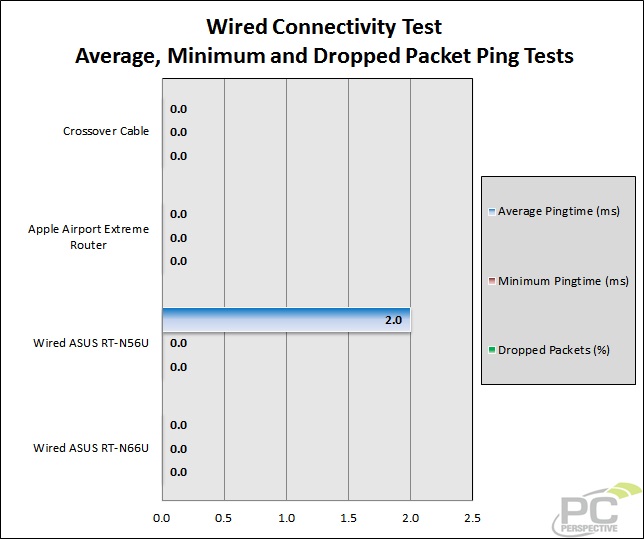 Testing showed that the ASUS RT-N56U matched all the other tests except for one, the Average ping time testing.  Average ping times on the N56U clocked in at 2 milliseconds compared to 0 for all the others.  While 2 is still rediculously fast, with wired connectivity, you would normally expect to see 0 ms across the board. 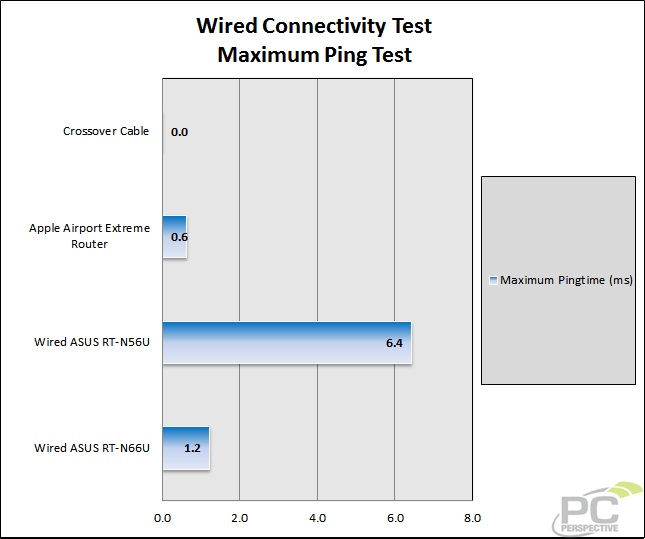 In the case of Maximum ping times, the ASUS RT-N56U actually fell behind all the others in testing, and by a hefty margin.  The 6.4 ms maximum pingtime is 5 times worst than the nearest result of the ASUS RT-N66U at 1.2 ms.  Once again, we’re talking about a couple of milleseconds here, so it’s not a huge deal, but it’s still something to keep in mind. 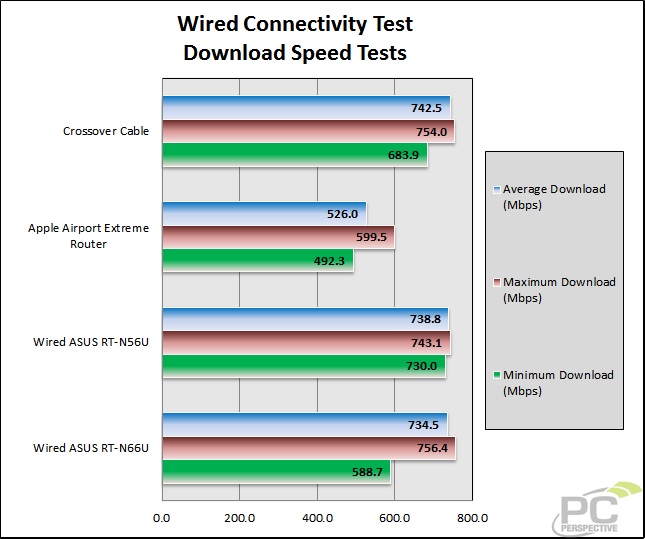 Download speeds turn the tables and the results look great on the RT-N56U.  More consistent between it’s own tetss across the board than any of the others, the 56U maintained the fastest minimum download speed.  Maximum speeds of 743.1 Mbps were just a slight bit under the faster maximums on the N66U (756.4 Mbps) and the Crossover Cable (754 Mbps).  For the all important Average download speed test, once again the N56U hung tough, pulling out second place in a tight race between the Crossover Cable and the RT-N56U. 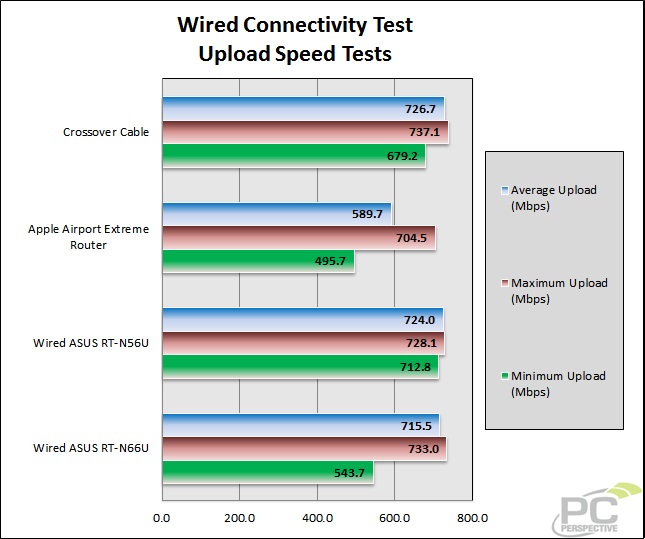 Again, we see the ASUS RT-N56U showing the most consistent results, but this time in wired upload speeds.  With average, maximum and minimum speeds all within about 15 Mbps of each other, the N56U comes in first again in the Minimum Upoads, while taking second in average speeds and third in maximum upload speeds.

Other than some minor troubles in ping testing, the RT-N56U puts in a great show in our wired testing. 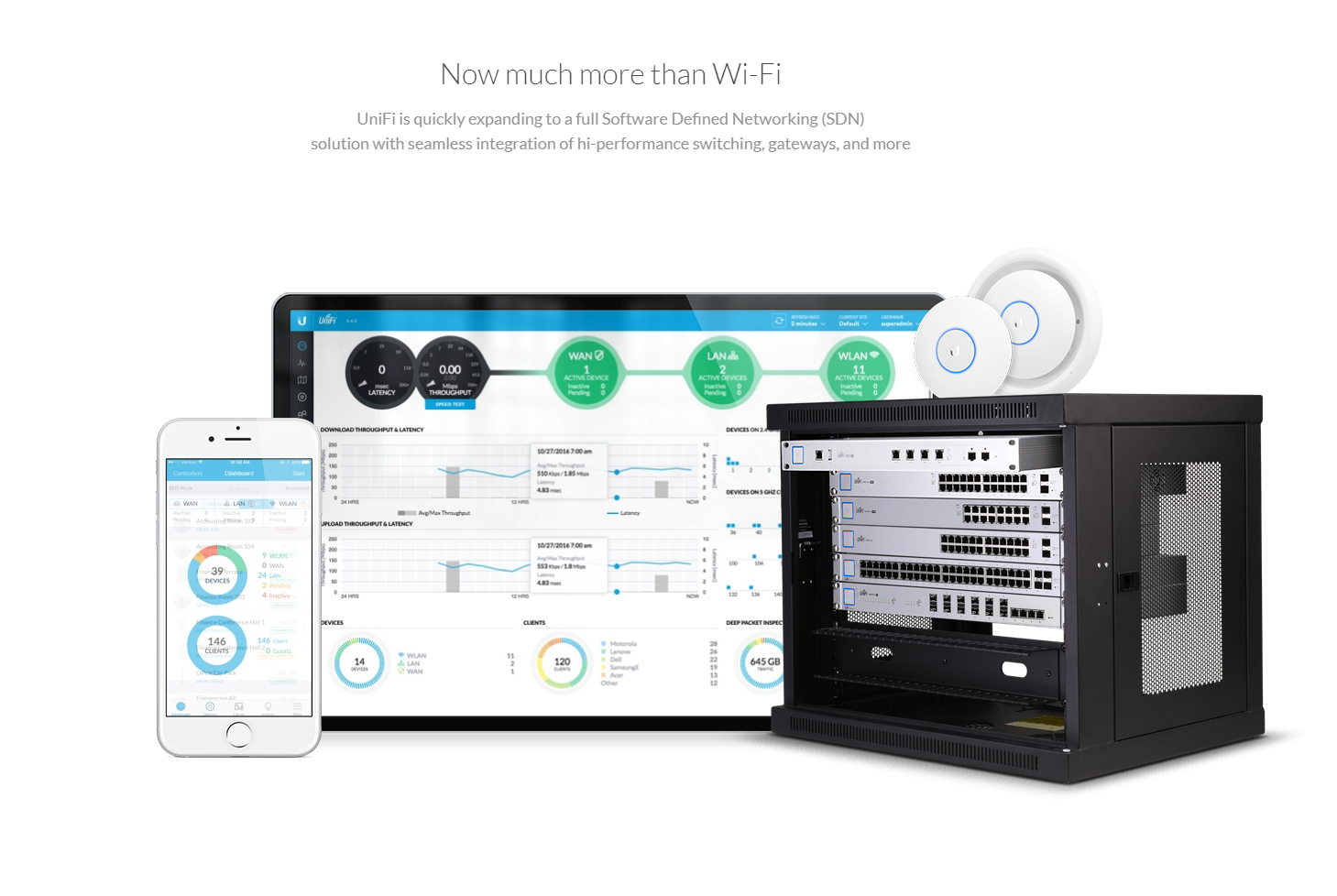