So, now we move back to the ASUS USB-N66 adapter on its ‘High Power’ setting.  Let’s see how well the various routers perform with our little ASUS spaceship adapter 45 feet from them. 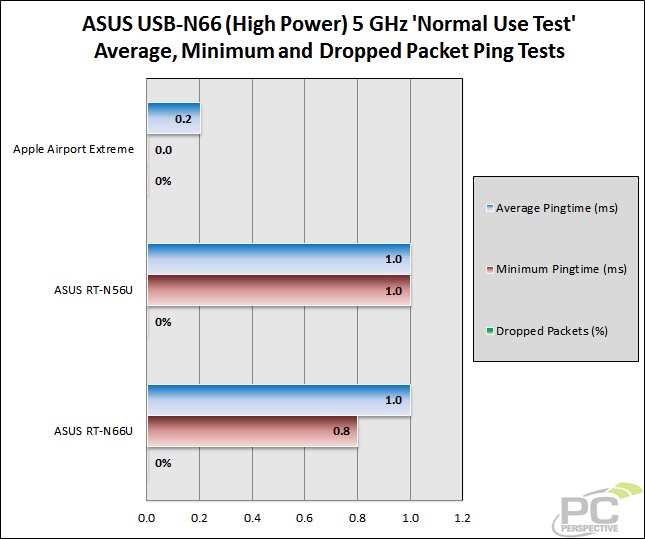 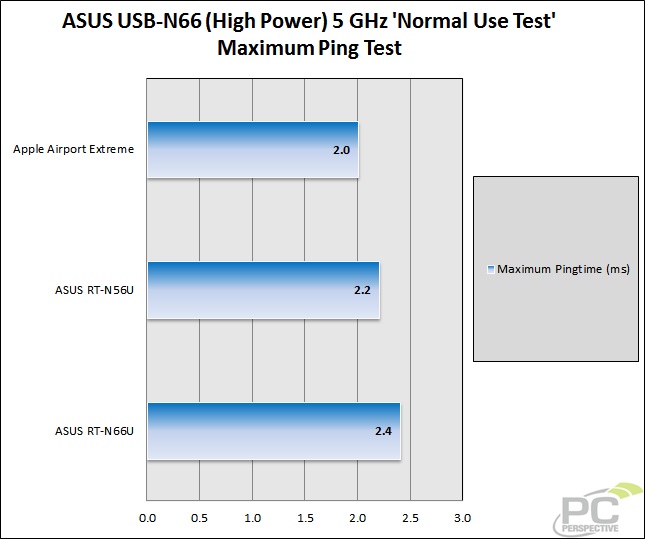 Ping testing at 5 GHz actually shows the ASUS RT-N66U performing near the back of the pack, with the only bright spot being a second place finish in Maximum pings.  Of course, we’re talking about .2 millisecond differences in some of these tests, so coming in last isn’t really that much of an issue. 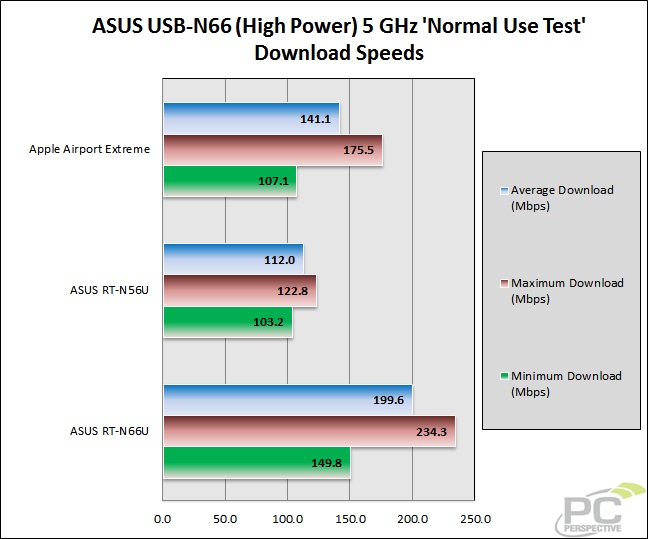 Downloading at 5 GHz we see the ASUS RT-N56U come in last place in all the tests.  Still, the N56U puts up the respectable numbers of 112 Mbps Average, 122.8 Mbps Maximum and 103.2 Mbps Minimum download speeds.  I think the lack of external antennas might be hurting the 5 GHz speeds at this range.  The N66U, with its 3 external antennas, trounces the outer routers, nearly doubling their speeds in some cases. 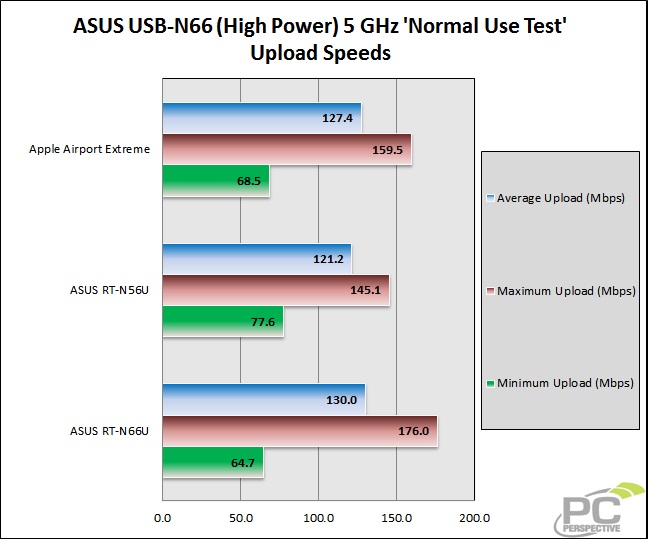 The RT-N56U makes a bit of a comeback in upload speeds, actually pulling out first place in Minimum upload speeds.  Unfortunately it falls a bit behind the Apple Airport and RT-N66U in Average and Maximum uploads.  So, let’s see if things are any different at 2.4 GHz. 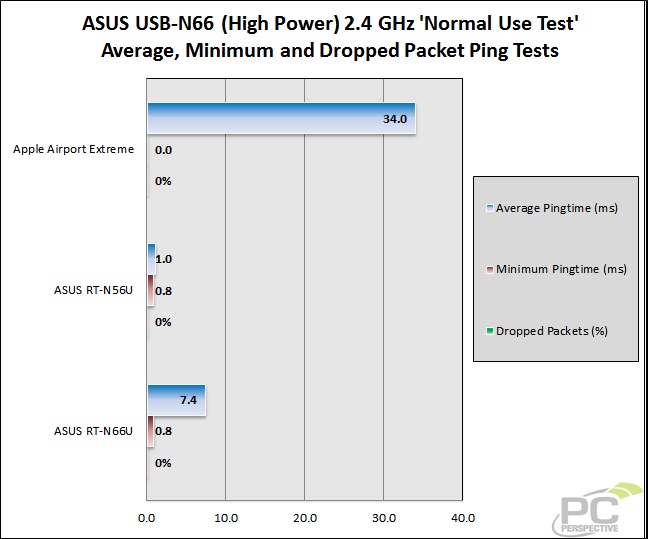 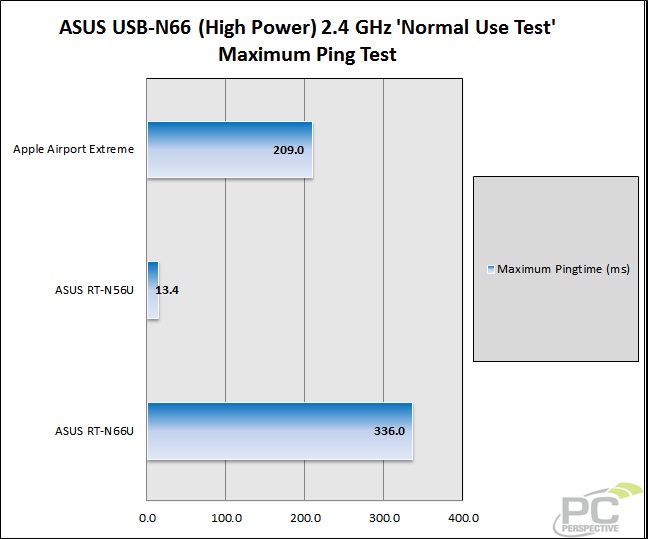 At 2.4 GHz, wireless signals can punch through floors and walls a lot easier than they can at 5 GHz, and we see the RT-N56U make a comeback in ping speeds, beating the others handily in both Average and Maximum ping times.  Maximum ping times in particular really show a wide margin with the RT-N56U at 13.4 ms, the Apple Airport at 209 ms and the RT-N66U at a whopping 336 ms. 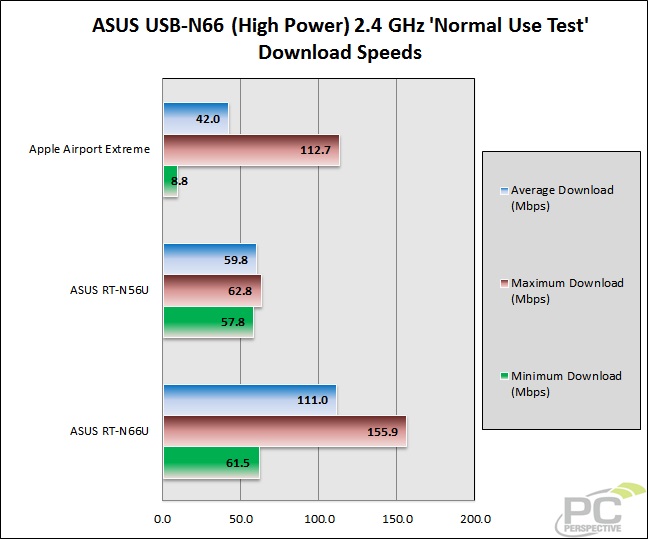 Consistency is the name of the game with the RT-N56U in download tests.  While it can’t keep up with the RT-N66U, it beats the Apple Airport in 2 out of 3 tests.  Additionally, all three tests for the RT-N56U come within a narrow 5 Mbps margin of each other. 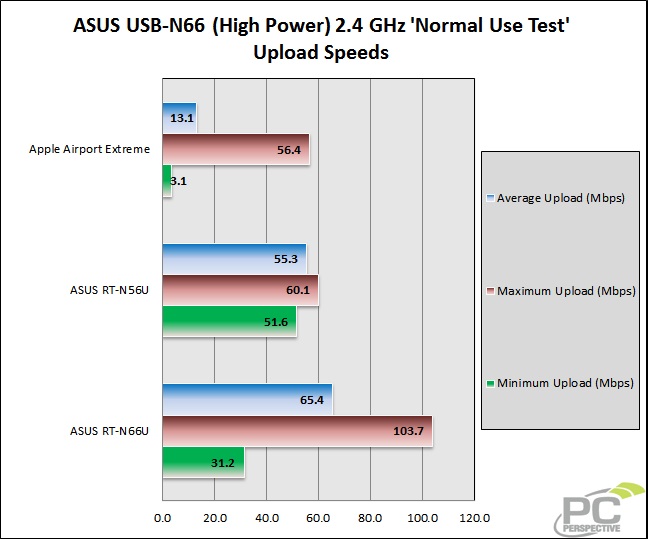 Once again, the RT-N56U has a nice consistent grouping across all tests, beating the Apple Airport in all of them as well.  The RT-N66U does pull ahead in both Average and Maximum upload speeds, but Minimum speeds are still faster with the RT-N56U.