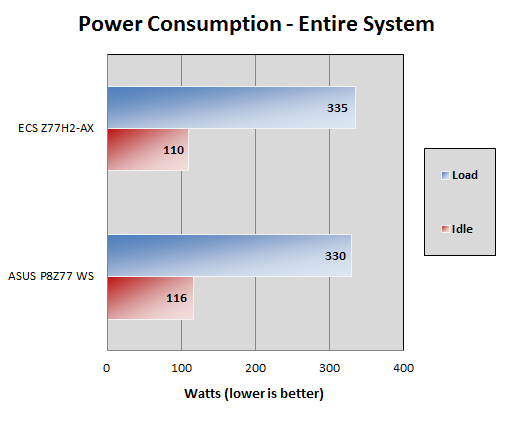 The ECS Z77H2-AX’s power consumption numbers fall in line with the other Intel-based system, illustrating that ECS did a good job with the board’s power circuitry layout and design. I guess all that gold does make a difference. Note that the power consumption numbers are consistent with what you would see using a medium to high-end video card with the board, since the ATI 5870 series are notoriously power hungry. Performance From a stock performance standpoint, I couldn’t have been happier with the ECS Z77H2-AX. It performed admirably in all the benchmarks with solid results in both the gaming and non-gaming tests. The real Achilles heel of the board was its lack of overclocking performance. Its lack of performance in the USB 2.0 and 3.0 hard drive tests remains puzzling as well. Pricing As of October 29, the ECS Z77H2-AX motherboard was available at Newegg.com for $269.99 with free shipping. The board was also available from other retailers such as Amazon.com for $313.60. 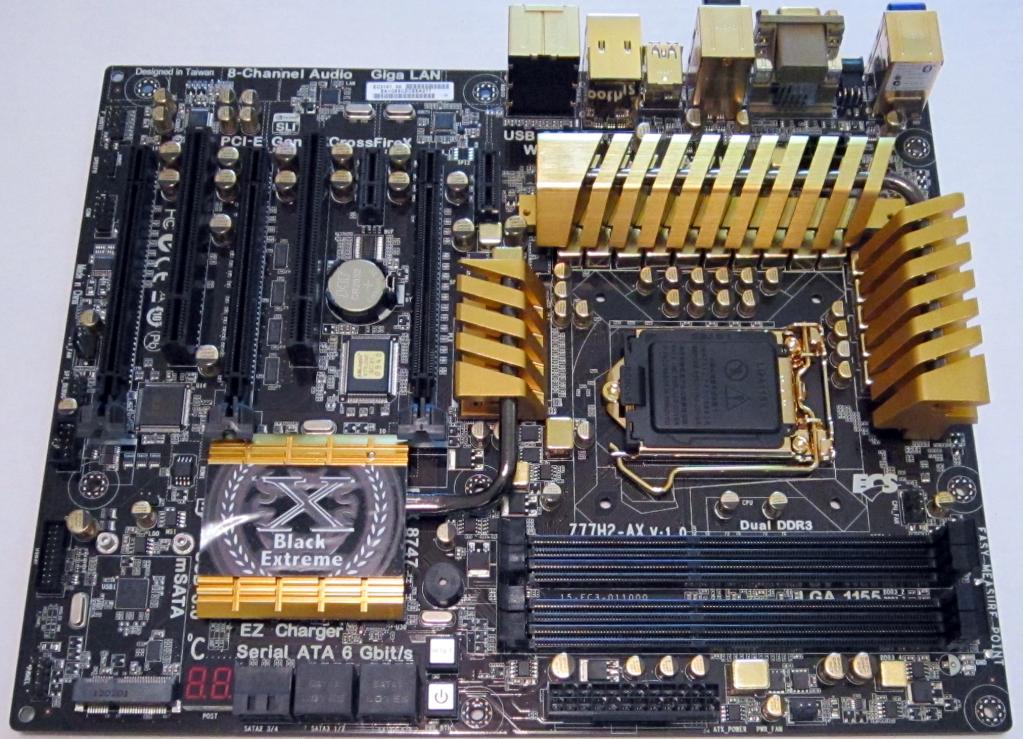 Conclusion At this point, we would like to give our friends at ECS a well-deserved “Thank you” for allowing us the opportunity to review the Z77H2-AX motherboard. Out of the box, the board is a work of art with enough gold to garner a spot at Fort Knox. ECS made sure to integrate in plenty of add-ins to more than justify the price tag, offering 3 different networking adapters, plenty of USB and SATA ports, not to mention support for 3-way NVIDIA SLI or AMD Crossfire. Couple that with its stock performance, and you have the makings of a champion. However, as was stated previously, the board fell short for me in the overclocking area. It barely managed to scratch the surface on memory overclocking and would not overclock the CPU speed at all (over the stock CPU Turbo mode settings that is). Strengths – Board look, can’t go wrong with black and gold – Stock performance – Number of available PCI-Express x16 slots – Available network adapter options – Accessible PCI-Express x1 slot with all PCI-Express x16 slots filled Weaknesses – UEFI BIOS mouse-based operational lag and option selection difficulties – CMOS battery placement – Lack of overclocking performance – USB 2.0 and 3.0 performance oddities – User manual lack of explanation for wireless antennae and BIOS debug codes