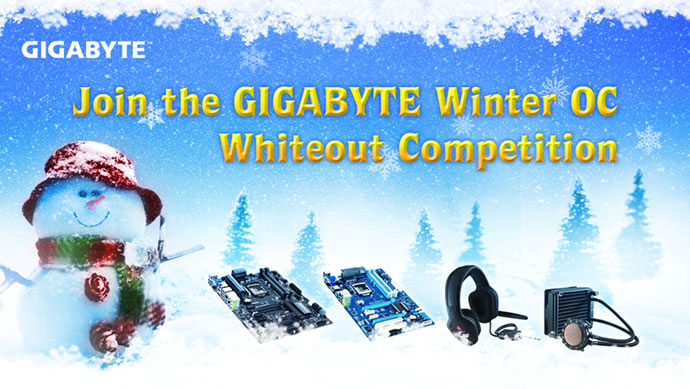 Gigabyte and Cooler Master have teamed up to host the Winter OC Whiteout overclocking competition. Enthusiasts are encouraged to push their systems as far as possible to achieve the highest 3D benchmark scores. Cooling methods like LN2 and liquid helium are encouraged to break existing records and grab the top spots, with certian hardware restrictions put in place over three classes to reportedly level the playing field.

The overclocking stages are as follows:

The stages are fairly self-explanatory. For stage one, users are not allowed to use any Intel X79 hardware (motherboards or processors). In stage two, the limits are that users can only use single or dual core processors. Stage three opens up the system such that you can use any processor and graphics card combination. Further, all three stages are limited to a single graphics card per system.

The contest is being run by HWBot, and overclock submissions need to follow the site’s validation rules. You will need to use a specific HWBot desktop background and submit screenshots of the overclock that include the benchmark score as well as screenshots of CPU-Z’s CPU, Memory, and Mainboard tabs. Also, you will need to include a photo of your computer hardware.

The photos of your computer hardware will also be used for a bonus contest where Gigabyte and Cooler Master will pick ten of the most festive submission photos on January 10th. Those ten photos will be placed on the Gigabyte Tech Column facebook page. The photo from that page receives the most Facebook likes by January 20th will win a bonus prize.

The contest will run from December 21st to January 20th, 2013. You can find more information over at the HWBot contest page.