We did have a stability issue with NUC that needs to be noted and discussed.  After getting the configuration ready to roll we started to copy our collection of benchmarks that we typically run on new systems including things like 3DMark11, some game backups, CineBench, x264 and others; it's a large collection of files in the range of 20-30GB.  During this first copy of files, the system started to stutter a bit and then locked up.  Like a hard lock; holding down the power button until it shutdown kind of thing.  Not great.

After hearing about a similar issue with Tech Report's testing a little while ago I did some reading and found that in fact we had the same problem.  Large data transfers over a wireless network using the installed Centrino mPCIe card caused the system to slow down and then lock up.  Not always, but enough times that it wasn't a one-time fluke.  With the close proximity of the Centrino and the Intel 520 SSD controller, we are likely seeing a heat issue though even with the cover removed from the NUC we had a system freeze once. 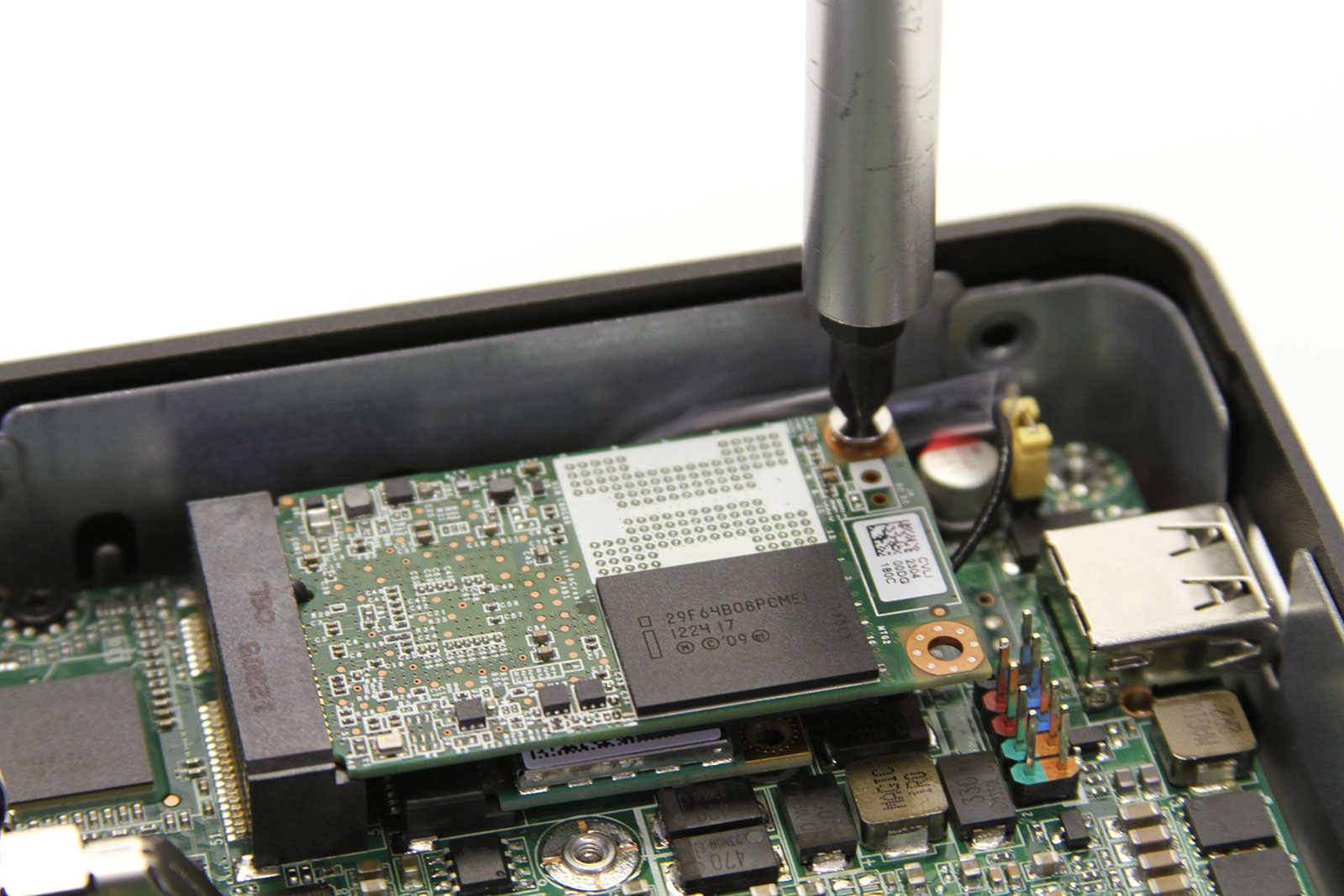 Intel has told us they are looking into the problem, have reproduced it and are hoping to have a fix out via a firmware adjustment.  I'm not sure what they can do in software that will fix this other than maybe turn up the fan (adding noise) or slowing down data speeds (uh, no thanks) but it is kind of hard to believe that Intel didn't find this before shipping with the consistency the media has seen the problem.

As of this writing, the Intel Next Unit of Computing is finally showing up at the normal online locations like Amazon and Newegg.  Here is the pricing of our configuration as we tested it:

Don't forget that power cable!  The total for this build would be $521 before shipping and while I realize that isn't EXACTLY what we tested there was difficulty finding some exact duplicates.

That price is pretty steep especially considering that you can get a much more powerful system for about the same amount of money.  Here is a build I quickly made over at PCPartPicker.com that includes and AMD Trinity APU, ASUS microATX motherboard, 120 GB SSD, power supply and chassis for about $425. 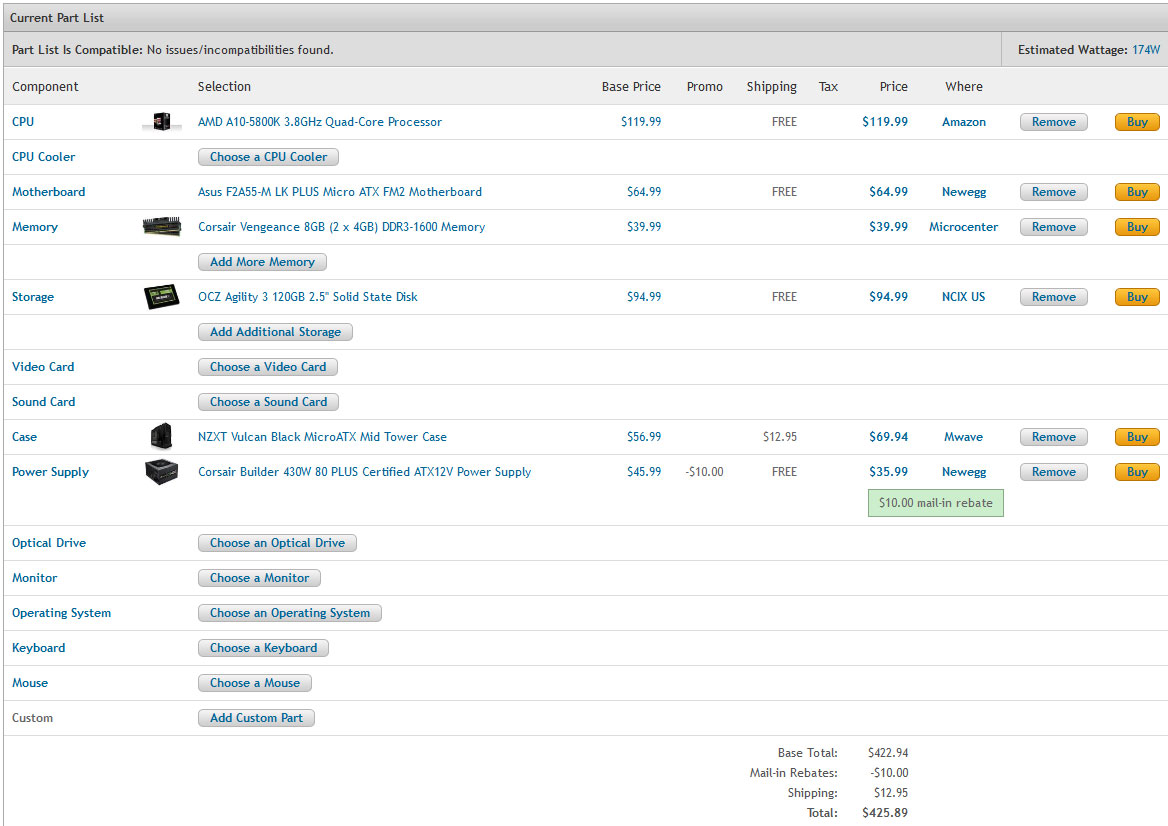 The obvious trade-off is size – the system above will take up 20x as much space on your desk and you would be hard pressed to mount it to the back of a TV.  It uses more power, will be louder and lacks some things like wireless networking and Thunderbolt.  It's not as sexy (to most of us I am guessing).  But it will play more games, run more programs more quickly and you'll have some cash left in your pocket to upgrade or spend frivolously.

Much like the pricey custom built gaming systems we have reviewed in the last couple of months, this is a product you have to KNOW you want to be worth it or have $500 of spending money to play around with a truly unique product.  If you are a gadget-type individual that just likes new things, likes to see what you can accomplish with new hardware, the Intel Next Unit of Computing is going to catch your eye.

And while I am focusing on the consumer aspect, remember that Intel is building this platform for more business applications like digital signage and wall displays – something that custom built PC above would not address well.

Intel's Next Unit of Computing is an interesting and creative way of pushing the small form factor PC design industry forward while still giving a nod to users like us that want to build and customize computers in anyway we can.  Want to build a NUC with a 500GB SSD and use it as a really expensive Gigabit Ethernet attached storage device in a small space?  Go for it.  Have an external Thunderbolt RAID array that you want to attach to the network for sharing?  You can do it as long as you use a wireless network or maybe a Thunderbolt Ethernet adapter.  There are a lot of potential custom use cases for the NUC. 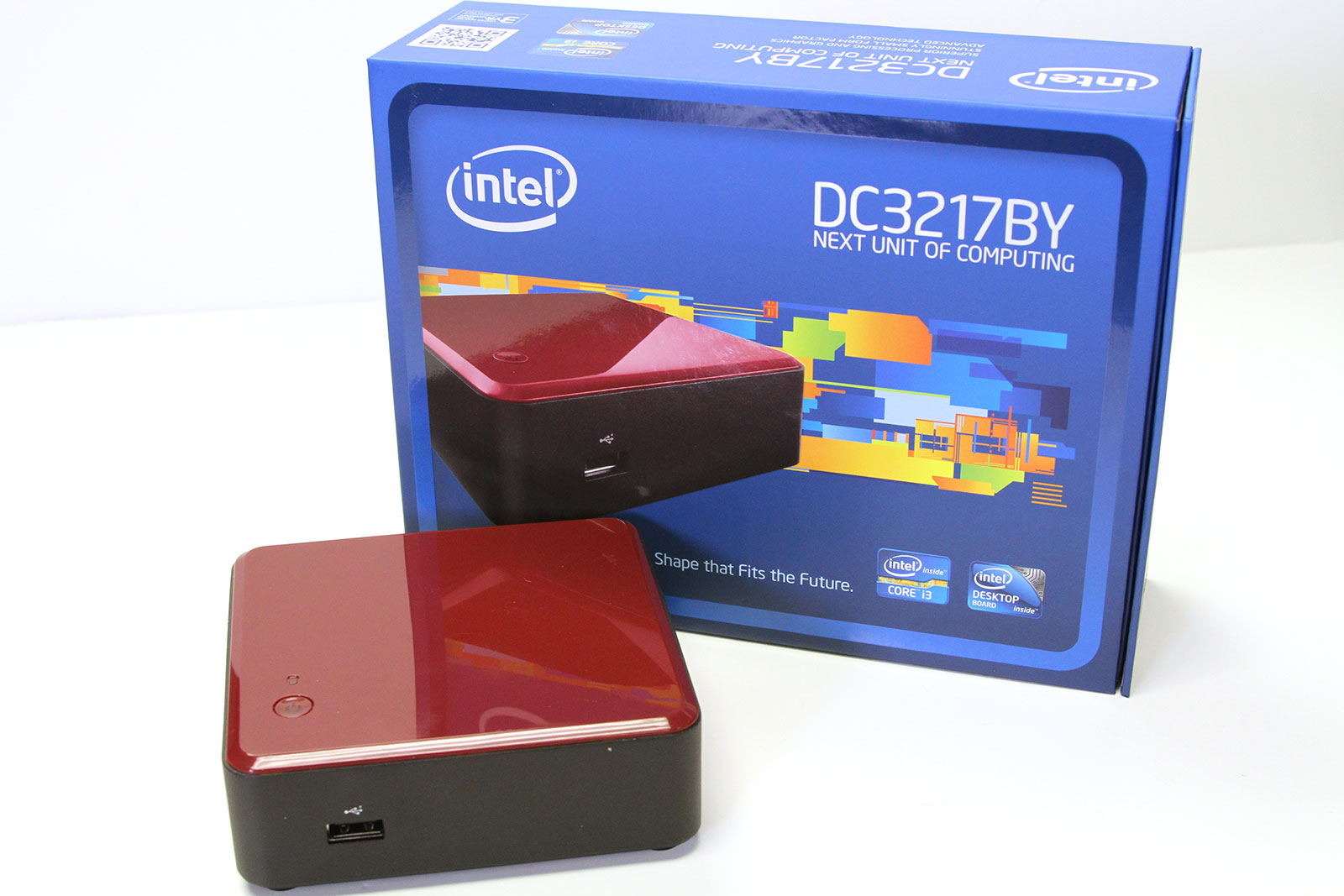 I definitely wish we didn't have the stability problem with the wireless + SSD combination like we did in our testing as it leaves a sour taste with me that Intel didn't find it before hand. Intel provided all the parts with the exception of the memory SODIMMs and it seems odd that they wouldn't have had the same issue Scott and I saw.  As it stands now I am not comfortable using the NUC in our office for any use without an external USB wireless adapter which seems…dumb.

The pricing is a bit high just as we see in the Ultrabook market today; you are going to pay more for a device that is smaller and slimmer and more power efficient but it is still within reason to be a neat and fun DIY build for creative individuals.  Intel is also hoping it will push more OEM/ODM partners to create interesting ways to take advantage of the new 4-in x 4-in motherboards that Intel is producing.  Maybe a train-shaped computer?  Or how about an Intel NUC with Mac OS X on it?

If you have some time and some money, the Intel NUC makes a great weekend project.

Check out our video right here!

Surprise Bulldozer; a sneak peek at the unreleased AMD processors 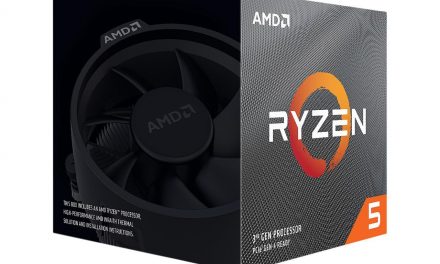