FutureMark Corporation’s 3DMark 11 is a reliable test for determining a system’s performance in DirectX 11 type games. The benchmark measures both graphics-based and PhysX-based system capabilities. The basic version of the benchmark test was run three times, with the highest reproducible 3DMark scores recorded. 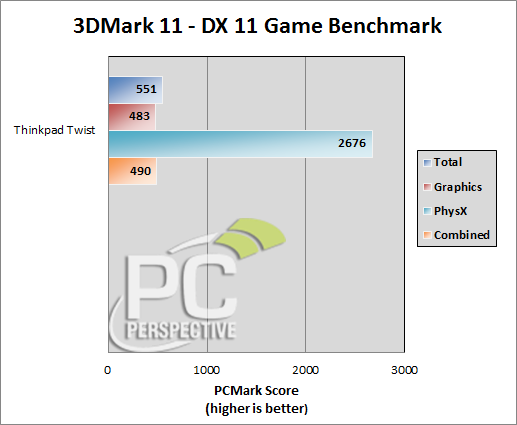 While the Thinkpad Twist is by no means meant for gaming by its use of the integrated graphics chipset, it does manage to do ok in this DX11 based test. The most telling result is that for the PhysX test because of that fact that PhysX is forced to run on the CPU for this test.

The in-game benchmark utility in Batman: Arkham City gives a real-world approximation of how well a system will perform in a DirectX 11-based game. The benchmark test was run at a 1366×768 resolution with all graphics settings set to Medium, Normal, or On with the following exceptions: FXAA Medium, DX11 enabled, PhysX disabled. 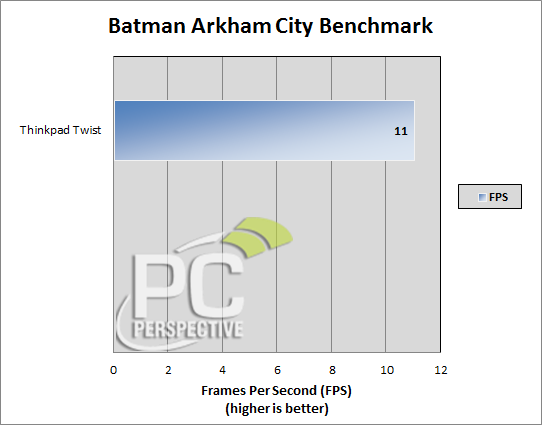 Even at Medium resolutions, the Thinkpad Twist cannot even begin to get acceptable frame rates out of the stock Intel graphics.

The in-game benchmark utility in Hard Reset gives a real-world approximation of how well a system will perform in a DirectX 9c-based game. The game engine was heavily modified by Flying Wild Hog studios to give DirectX 11-like graphical and PhysX abilities. The benchmark test was run at a 1366×768 resolution with all graphics settings set to Medium or On with the following exceptions: FSAA Normal, Anisotropic Filtering 4x, PhysX at Default. 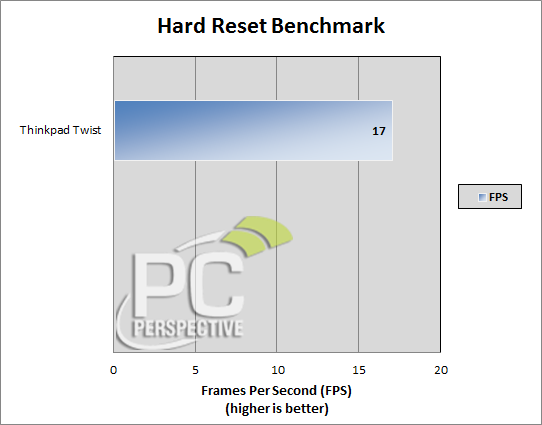 While these results are a bit better than in the DX11-based Arkham City game, the Thinkpad Twist still remains hampered by the Intel graphics at medium settings.