Earlier this year, NVIDIA showed off a roadmap for its Tegra line of mobile system on a chip (SoC) processors. Namely, the next generation Tegra 4 mobile chip is codenamed Wayne and will be the successor to the Tegra 3.

Tegra 4 will use a 28nm manufacturing process and feature improvements to the CPU, GPU, and IO components. Thanks to a leaked slide that appeared on Chip Hell, we now have more details on Tegra 4.

The 28nm Tegra 4 SoC will keep the same 4+1 CPU design* as the Tegra 3, but it will use ARM Cortex A15 CPU cores instead of the Cortex A9 cores used in the current generation chips. NVIDIA is also improving the GPU portion, and Tegra 4 will reportedly feature a 72 core GPU based on a new architecture. Unfortunately, we do not have specifics on how that GPU is set up architecturally, but the leaked slide indicates that the GPU will be as much as 6x faster than NVIDIA’s own Tegra 3. It will allegedly be fast enough to power displays with resolutions from 1080p @ 120Hz to 4K (refresh rate unknown). Don’t expect to drive games at native 4K resolution, however it should run a tablet OS fine. Interestingly, NVIDIA has included hardware to hardware accelerate VP8 and H.264 video at up to 2560×1440 resolutions. 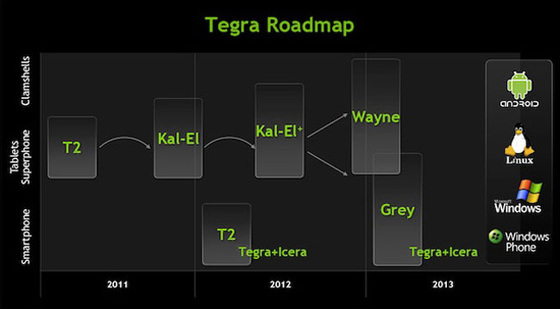 The leaked slide has revealed several interesting details on Tegra 4, but it has also raised some questions on the nitty-gritty details. Also, there is no mention of the dual core variant of Tegra 4 – codenamed Grey – that is said to include an integrated Icera 4G LTE cellular modem. Here’s hoping more details surface at CES next month!