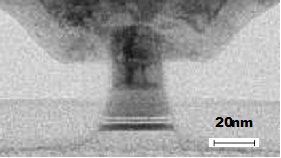 Static random-access memory has been the standard memory used in cell phones and other hardware where having low power consumption is more important than speed.  It may be on its way out as Toshiba has announced that they have developed prototype magentoresistive RAM which is more efficient that SRAM thanks to the fact that it is non-volatile and can essentially remain in a powered off state until it is accessed for a read or write command.  They also feel that this new type of RAM will allow increased performance as well as a way to continue to reduce the process size below 30nm.  The information they passed on to DigiTimes is based on a model as opposed to working silicon, so we are a ways away from seeing MRAM in cell phones, however Toshiba is quite confident in the accuracy of their simulation.

"Toshiba has announced the development of a prototype memory element for a spin transfer torque magnetoresistive random access memory (STT-MRAM). The new MRAM element achieves what the company claims is the world's lowest power consumption yet reported, indicating that it has the potential to surpass the power consumption efficiency of SRAM as cache memory."