When the original Intel Atom hit the scene, it was a reasonably large success for Intel with the massive explosion of netbooks.  The original design was very simplistic, but was fairly power efficient.  The weak link of the original Atom was the 945 chipset graphics that were not only underpowered, but were based on a relatively power hungry desktop chipset.  The eventual competition from AMD featured a next generation low power core based on the Bobcat architecture which featured a modern graphics core that was more than adequate for most scenarios.

Intel never stood still, but their advancement of the low power cores was slow as compared to the massive leaps and bounds we saw from the original Core architecture in 2006 on the desktop and server markets.  Typically these products lagged the desktop products in terms of process nodes, but they continued to advance these cores little by little.

Leap forward a few years and we saw the eventual demise of the netbook and the massive uptake of mobile computing.  Mobile computing was primarily comprised of tablets and smartphones.  Intel was late to the party as compared to products from Qualcomm, Samsung, and NVIDIA.  A fire was lit under the Atom group at Intel, as the competition had far surpassed the company in ultra-mobile parts. 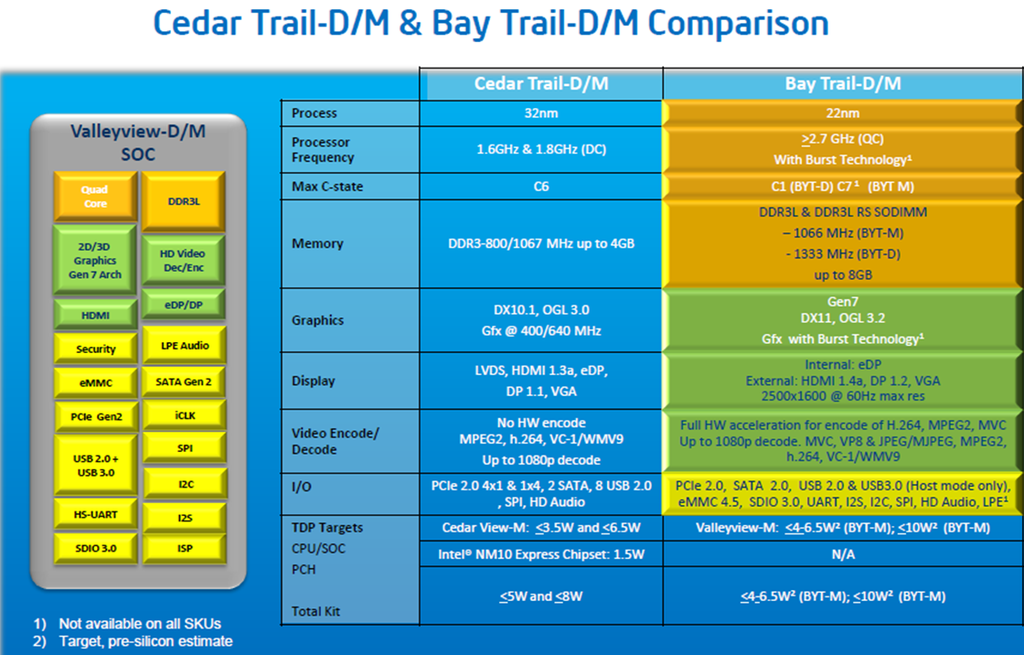 Happily for those of us paying attention, the 3D Center Forum has released some very interesting slides about the 22 nm generation of Atom products and the platforms they will be integrated into.  Valleyview is the SoC while Bay Trail is the platform.

Valleyview is based on Intel’s 22 nm process and will be a next generation Atom processor with a multitude of new features.  It will be a SoC as it will no longer require a traditional southbridge.  It will have improved graphics as compared to the most recent Atom processors.  While the SoC will feature USB 3.0, it will not embrace SATA-6G or PCI-E 3.0.  The CPU will go up to quad core units that will be 50% to 100% faster than current parts.  These new chips will also introduce a boost functionality (think desktop Turbo Boost) that will run the frequency equal to or greater than 2.7 GHz.

While Intel has been slow to react to the mobile push, they are starting to get that ball rolling.  It will be very interesting to see if they can move fast enough to outrun and outwit the ARM based competition, not to mention AMD’s latest 28 nm products that will be released in the first half of 2013.