You might remember over the holiday season of 2012 that AMD had a simply amazing bundle of games to entice PC gamers to choose purchasing Radeon graphics cards instead of GeForce.  That bundle included Medal of Honor, Sleeping Dogs, Hitman: Absolution and Far Cry 3.  We were stoked to see that kind of comittment to the gamer and even did a set of three game streams with AMD on each games' release.

Well after a behind-the-scenes battle that was finally decided just about two weeks ago, AMD is ready to announce the "Never Settle Reloaded" bundle that might actually be MORE impressive based on the games included.

First up is the reboot of Tomb Raider, a fresh look at the Lara Croft character that I got to get hands on at an event in Toronto last year.  Due out on March 5th, the visuals in this game are damn good.

Bioshock infinite is the third game in the acclaimed series and has a few DirectCompute additions to the game engine code.  Release is set on March 26th.

DMC Devil May Cry is included for the APAC region (instead of Tomb Raider).

And the biggest name in the bundle is no doubt Crysis 3 – a game that many PC gamers have been looking forward to and one that promises to push gaming performance on high-end GPUs to their limits.  I was playing this on a GTX 680 recently (the MP beta) and couldn't get more than 40 FPS at 1080p and Ultra settings.

So how doese the bundle break down?

If you buy a single Radeon HD 7970 or HD 7950 you'll be able to get keys for both Crysis 3 and Bioshock Infinite, completely free!  HD 7800 series buyers will get both Bioshock Infinite and Tomb Raider.

Just to make things MORE interesting, if you invest in a set of HD 7900 cards for CrossFire, or even a dual-GPU HD 7900 card like the Devil 13, you'll get Crysis 3, Bioshock Infinite, Tomb Raider, Far Cry 3, Hitman: Absolution and Sleeping Dogs.  That is 6 full PC games worth at least $300 that you'll get keys for just for picking AMD's Radeon cards over NVIDIA's GeForce. 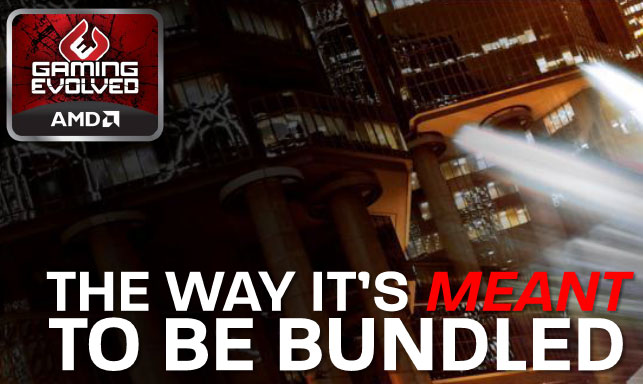 A not-so-subtle jab at the competition…

So there you have it, the Never Settle Reloaded bundle.  This iteration doesn't include anything for HD 7700 series cards but I think most enthusiasts are going to stay in the HD 7850 and above range of options anyway.

NVIDIA has definitely fallen behind when it comes to these kinds of deals for PC gamers and I want to know what YOU think – do these bundles affect your purchasing decision?  We heard from AMD that at least one major reseller of PC hardware saw an "order of magnitude" increase in sales during the holiday season with the original Never Settle bundle and they even won a Newegg award for best marketing campaign.

Get ready for game streams again as well – we'll be hosting a few of them in February and March with more hardware and game keys to give away!