In a report first spotted by Rage3D from source website 4gamer.net, news is filtering out that AMD may in fact have no new discrete graphics card releases for the remainder of 2013!  While talking with the APAC media about the fantastic Never Settle Reloaded game bundle, they showed THIS slide.

That seems to indicate that at the very least through the 3rd quarter of 2013, AMD has no plans to update or add to its discrete graphics card roadmap.  We had heard whispers of this fact while at CES in January but this pretty much puts a cap on it.  And with the wording of "throughout 2013" it could indicate we won't see new product until 2014. 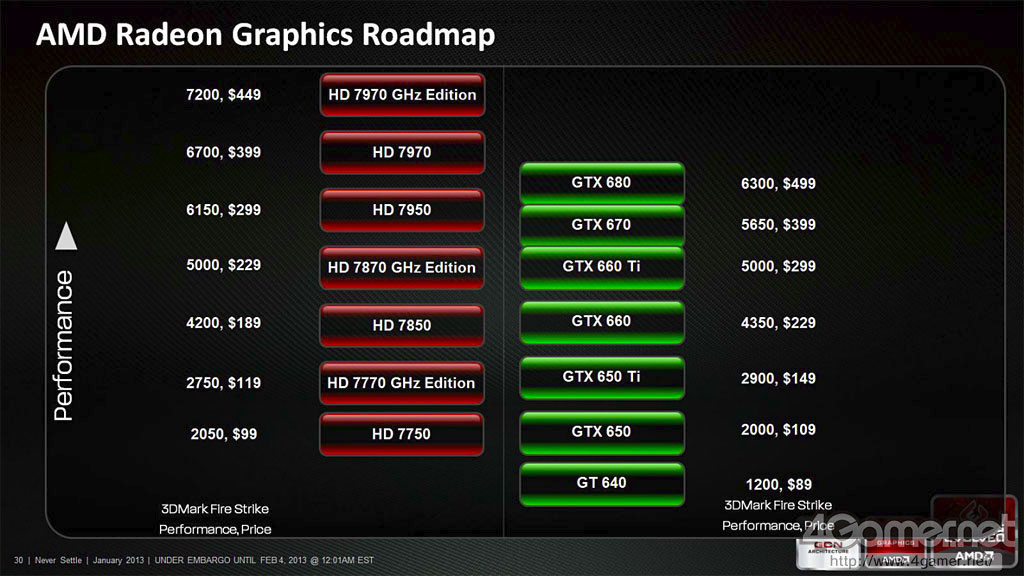 Also shown, this product comparison between AMD and NVIDIA, put together by AMD, is a bit lopsided and less than 100% accurate in my eyes.  With the release of the new 3DMark Fire Strike benchmark AMD has a distinct advantage and it seems the slide here is based completely on that….blech.

Regardless, what does it mean if AMD actually has no new discrete, enthusiast class cards for 2013?  We know the rumors are swirling about the NVIDIA GeForce Titan based on the GK110 and sporting 2688 CUDA cores and it will likely take the place as the fastest single GPU card on the market.  AMD has been depending on its partners to build multi-GPU options based on Southern Islands like the ASUS ARES II and Powercolor Devil 13 but they have been pretty low volume.  Our original review of the HD 7970 launched in December 2011….this could be quite a drought.