Gigabyte uses the IR chips on the latest FM2 platform

FM2 poses an interesting quandary for motherboard manufacturers.  AMD provides a very robust and full featured chip for use with their processors (A85X) that would lend itself well to midrange and enthusiast class motherboards.  Unfortunately, AMD does not provide a similarly high end CPU as compared to the competition at price ranges that would make sense for a motherboard that would cost between $140 and $250 on the FM2 platform.

So these manufacturers are constrained on price to offer fully featured motherboards that take advantage of all aspects of the A85X FCH (Fusion Controller Hub).  Until AMD can deliver a more competitive CPU on the FM2 platform, motherboard manufacturers will be forced to design offerings that can really go no higher than $129 (the current price of the fastest A10 processor from AMD).  This is not necessarily a bad thing though, as it has forced these manufacturers to really rethink their designs and to focus their energies on getting the greatest bang-for-the-buck.  AMD is selling a decent number of these processors, but the market is constrained as compared to the Intel offerings utilizing the 1155 BGA infrastructure.

Gigabyte has taken this particular bull by the horns and have applied a very unique (so far) technology to the board.  This is on top of all the other marketing and engineering terms that we are quite familiar with.  The company itself is one of the top three manufacturers of motherboards in the world, and they typically trail Asus in terms of shipments but are still ahead of MSI.  As with any motherboard manufacturer, the quality of Gigabyte products has seen peaks and valleys through the years.  From what I have seen for the past few years though, Gigabyte is doing very well in terms of overall quality and value.

The A85X FCH is AMD’s latest motherboard I/O chip and it comes packed to the gills with features.  It is very closely related to the older A75 chip, but it offers a reworked SATA 6 controller that features a total of 8 ports.  This is 6 more SATA 6G ports than the latest Intel Z77 and X79 chipsets.  The tweaked design, updated drivers, and updated firmware allow it to run faster than the A75 and a bit closer to the very high performance Intel SATA 6G designs.  While it will not outperform the Intel solutions in pure speed, the ability to connect up to 8 SATA 6G devices certainly deserves mention. 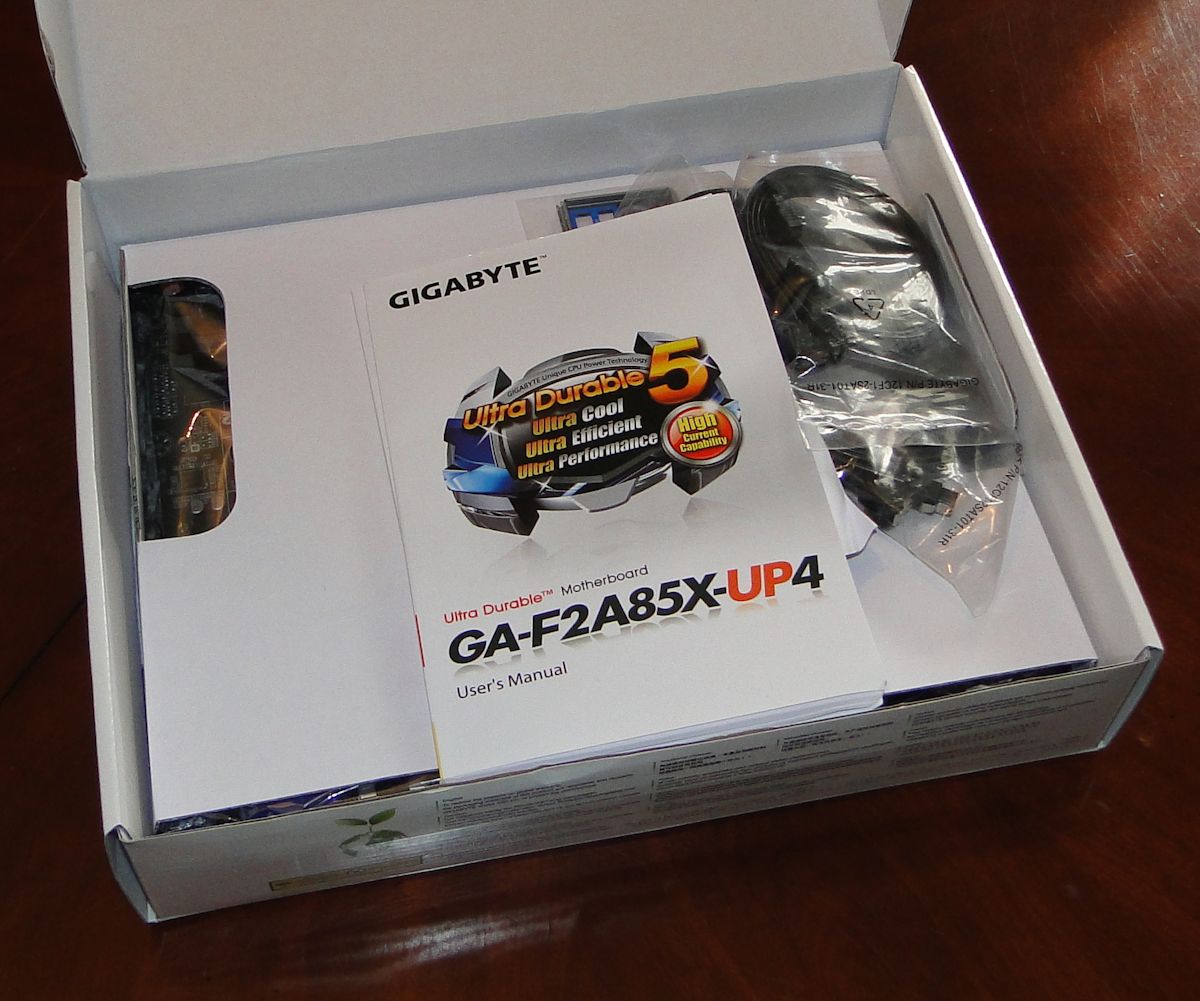 The bundle is very minimalist.  Six SATA 6G cables should be enough for ya…

AMD was the first manufacturer to include native USB 3.0 support on a motherboard chipset, and they continue that support with the A85X.  The same basic USB 3.0 that was featured in the A75 is found in the A85X.  It is a four port controller based upon the Renesas design.  I believe that AMD licensed the design instead of developing their own.  This helped in terms of time to market, but overall performance is fairly average as compared to the native Intel implementation in their latest chipsets.  It also features 10 USB 2.0 ports as well as 2 USB 1.1.

There are other interesting features about this chip.  It contains a Gig-E MAC (though a PHY chip is needed in the actual motherboard implementation).  The SATA controller supports RAID 0, 1, 5, and 10.  It supports up to three PCI slots natively, though we have to question what modern motherboard even needs that many PCI slots.  It also contains the VGA DAC (Digital to Analog Converter) to take the digital video signal from the APU and convert it for use over the DB-15/VGA connection on the back of the motherboard. 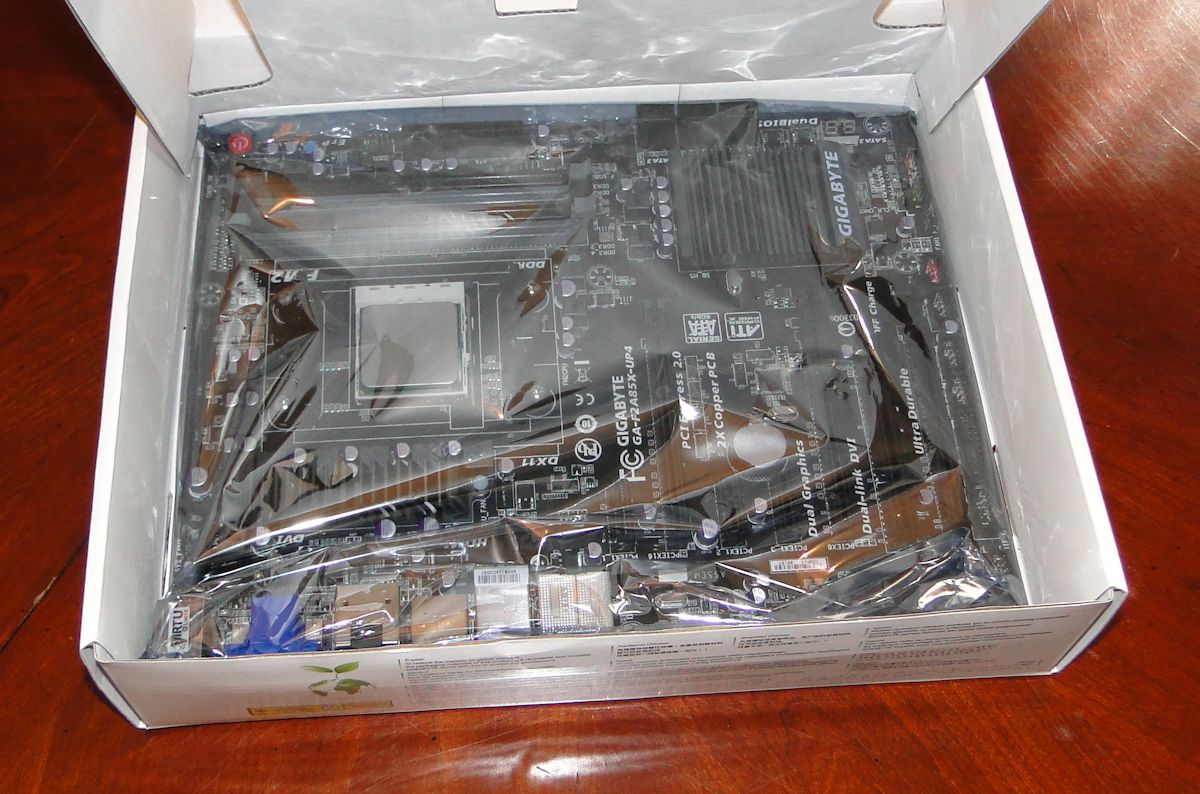 The board is not particularly well protected as compared to other motherboards, but my particular model arrived undamaged after being shipped from overseas (and then from Kentucky).  You know how those Kentucky people handle boxes…

The A85X is a pretty packed chip.  It has a pretty moderate 7.8 watts TDP, so it can be easily cooled by a fair sized passive heatsink.  Considering that AMD put 8 SATA 6G ports on this number, it really is a cutting edge chipset for the motherboard market.  Considering that it connects to the CPU via 4 x PCI-E 2.0 lanes, one would think that this particular chip could be integrated with a current 990FX northbridge (which communicates with the SB950 via 4 x PCI-E 2.0 lanes as well).  This would certainly give the 990FX a nice boost in features as compared to current implementations utilizing the SB950, but we have to wonder how many AM3+ motherboards are actually shipping these days.