The use of the pricier IR units on the power delivery system should give Gigabyte an advantage when it comes to power usage.  Power was measured from the wall for the PC power supply.  Power from peripherals is not measured.  The PC was let sit for about 10 minutes before idle power was measured and Cinebench R11.529 was used to measure load. 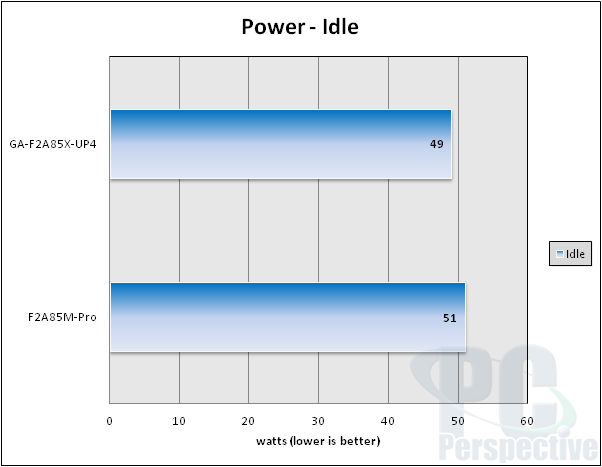 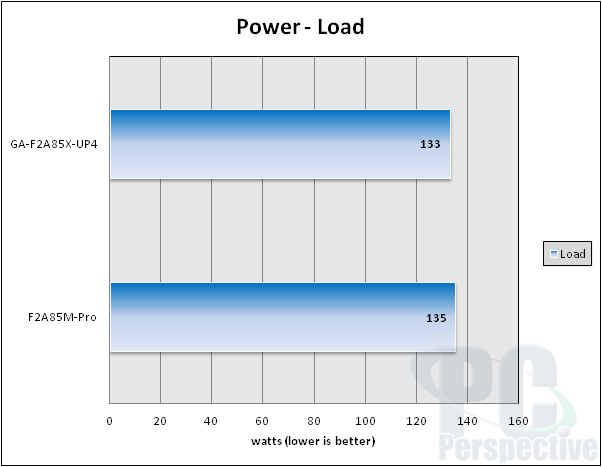 The Gigabyte board was consistently pulling less power than the Asus board.  This is a small victory for Gigabyte, but two less watts at idle and load is not going to save the user a lot of money over the lifetime of the product.

In terms of overclocking, FM2 is sorta interesting.  The base clock is 100 MHz, and it is PCI-E derived.  This means that the multiplier for the CPU is going to range from 38x to 42x.  FSB overclocking is not as important in many ways to Trinity as it was to earlier products on AM3.  Users can still adjust it to increase the memory speed, but in most cases the Trinity APU running at 1866 speeds is not entirely memory constrained.

The previous Asus board was able to push the A10-5800K to 4.5 GHz at 1.55v.  I was able to match the 4.5 GHz mark, but the Gigabyte board achieved this at 1.5v.  For better or for worse, the first Trinity desktop parts just cannot overclock very well.  With high end water cooling users are getting to 4.7 GHz.  Those running LN2 will obviously get higher, but that is with one module shut down as well as the graphics portion.  Perhaps we will see some more legroom with Richland?  Hard to say.  As it stands, the Gigabyte board is slightly better at overclocking because it requires less voltage to get to the 4.5 GHz mark.

In terms of heat, the board never gets hot at all.  The southbridge cooler does its job very well.  The VRM cooling stays cool to the touch even under load and overclocked.