The latest ROG board for AM3+ Impresses all around.

Over the past several years I have reviewed quite a few Asus products.  The ones that typically grab my attention are the ROG based units.  These are usually the most interesting, over the top, and expensive products in their respective fields.  Ryan has reviewed the ROG graphics cards, and they have rarely disappointed.  I have typically taken a look at the Crosshair series of boards that support AMD CPUs.

Crosshair usually entails the “best of the best” when it comes to features and power delivery.  My first brush with these boards was the Crosshair IV.  That particular model was only recently taken out of my primary work machine.  It proved itself to be an able performer and lasted for years (even overclocked).  The Crosshair IV Extreme featured the Lucid Hydra chip to allow mutli-GPU performance without going to pure SLI or Crossfire.  The Crosshair V got rid of Lucid and added official SLI support and it incorporated the Supreme FX II X-Fi audio.  All of these boards have some things in common.  They are fast, they overclock well, and they are among the most expensive motherboards ever for the AMD platform.

So what is there left to add?  The Crosshair V is a very able platform for Bulldozer and Piledriver based parts.  AMD is not updating the AM3+ chipsets, so we are left with the same 990FX northbridge and the SB950 southie (both of which are essentially the same as the 890FX/SB850).  It should be a simple refresh, right?  We had Piledriver released a few months ago and there should be some power and BIOS tweaks that can be implemented and then have a rebranded board.  Sounds logical, right?  Well, thankfully for us, Asus did not follow that path.

The Asus Crosshair V Formula Z is a fairly radical redesign of the previous generation of products.  The amount of extra features, design changes, and power characteristics make it a far different creature than the original Crosshair V.  While both share many of the same style features, under the skin this is a very different motherboard.  I am rather curious why Asus did not brand this as the “Crosshair VI”.  Let’s explore, shall we?

Going Under the Skin

The styling decisions make the Formula Z and the previous board look nearly identical, but that is of course only skin deep.  The same red and black motif was retained, and at a quick glance it seems that only the addition of a couple SATA ports and the exchange of a PCI slot with a PCI-E are the only changes.  This is not the case, and the changes throughout the entire design are dramatic.  The PCB redesign is big, and so is the power delivery system.  The audio subsystem perhaps received the most attention out of the entire spin.

The power delivery system has two major upgrades.  The first is that it uses the newer and supposedly more powerful Extreme Engine Digi + II.  This controls the power phases to deliver the necessary power when needed, and to do so quickly with as little lag as possible.  This insures that a CPU will get the power it needs in both normal and overclocked states.  It also allows for more aggressive power throttling to keep consumption and heat production down.  The second upgrade is going from an 8-2 phase system to 8-2-2.  8 phases go to the CPU cores, 2 phases supply the memory controller and un-core features of the CPU, while an extra two phases supply the main memory.  Typically memory only utilizes one phase, but the extra phase again should allow for more even power delivery to the DIMMS, allowing them to run more reliably at higher clock speeds. 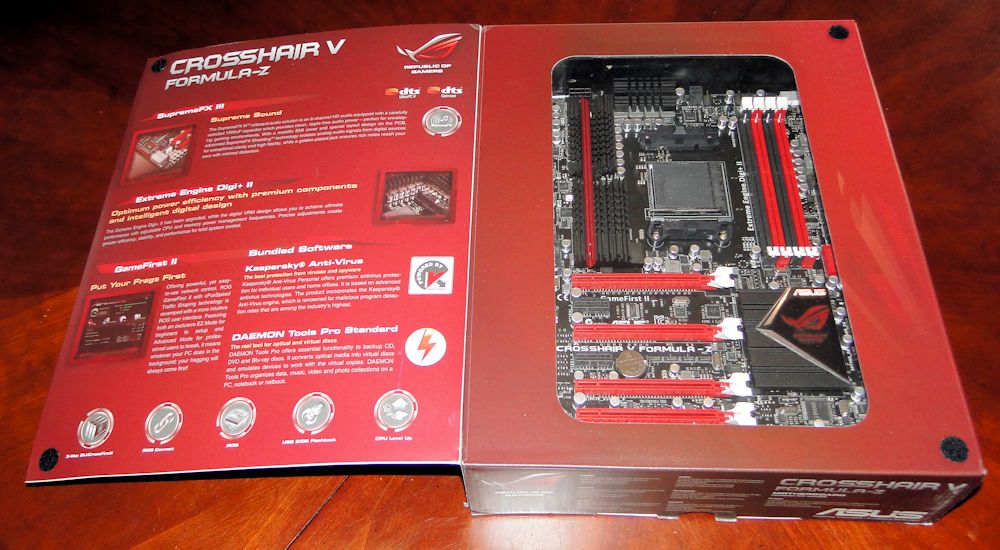 Opening the cover reveals more information about the board.

Speaking of memory, the board actually supports the use of DDR-3 2400 DIMMS.  The native memory speed of the latest Piledriver processors is DDR-3 1866.  Through judicious overclocking the user can get that to 2400+ MHz.  Two reasons for this improvement over the previous board (2133 speeds) is that of the extra power phase and the use of the T-Topology design.  Essentially this design makes sure that the memory traces are routed in such a way so that the individual DIMM channels will see the same length of traces.  This allows for higher speeds due to signaling factors.

The board has a total of 10 SATA 6G ports, two of which are e-SATA.  The first six ports are the native units from the SB950 southbridge, while the other four are from the ASMedia controller.  This should allow a maximum amount of flexibility when installing storage solutions.  Asus also removed the last PCI slot from their design.  They have replaced it with another PCI-E x1 slot.  The board has four x16 slots, the last of which is electrically x4 compatible.  The setup allows for three way CrossFire and SLI, as well as NVIDIA Quad SLI with 2 x GTX 690s.

Ethernet is the same as the last generation board, but with a couple of changes.  It still uses the Intel Gig-E controller and the ROG Gamefirst II QOS software.  Asus has done a lot of programming here to improve the user experience by including the new “EZ Mode” network administration package.  This is a simple point and click interface which controls a lot of the advanced functionality of the Ethernet controller.  People can quickly get up to speed about how it works and what advantages there are to using the functionality.

The UEFI BIOS implementation is still among the best in the business.  All settings are easy to access, most of them have a helpful description about what they do, and the integrated tools such as EPROM readers and the BIOS flash utility are very handy.  Something that we have not seen much of before is the ability of the D.O.C.P. overclocking functionality to read both XMP and AMP memory profiles.  XMP was released by Intel to optimize memory timings, while AMP is the AMD version.  There is enough space in the BIOS to support both of these implementations, so nearly any modern enthusiast memory kits will be fully utilized when this setting is enabled. 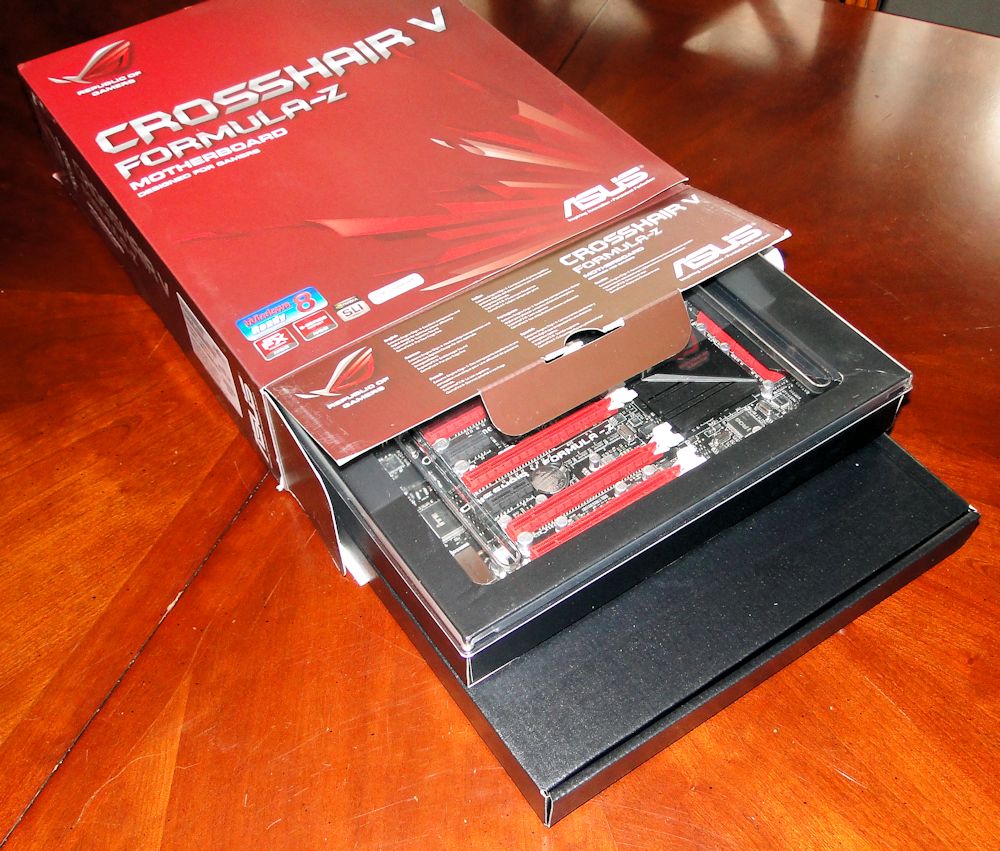 Asus packs their boards very well, with the bottom box holding all of the accessories.

The board has full Windows 8 support by including a (relatively) massive 64mb BIOS ROM.  This gives enough space for the Win8 installation and update files.  It gives the ability to utilize the Fast Boot capabilities, Secure Boot to protect against malware boot loaders, and finally OEM Activation 3.0.  The last feature allows users to store installation information so that if they need to re-install Windows 8, they do not have to go back online or over the phone to activate the software.

There is now a TPM header for security purposes.  A “Fast Boot Switch” that disables fast booting with Windows 8.  It also includes the Directkey/DRCT header for going to the BIOS.  When pressed the Directkey will start the machine up and go directly into the BIOS.  This frees the user from waiting around and trying to hit Delete to get into the BIOS (and sometimes failing).  The DRCT header has the same functionality but is used only with cases which feature that functionality.