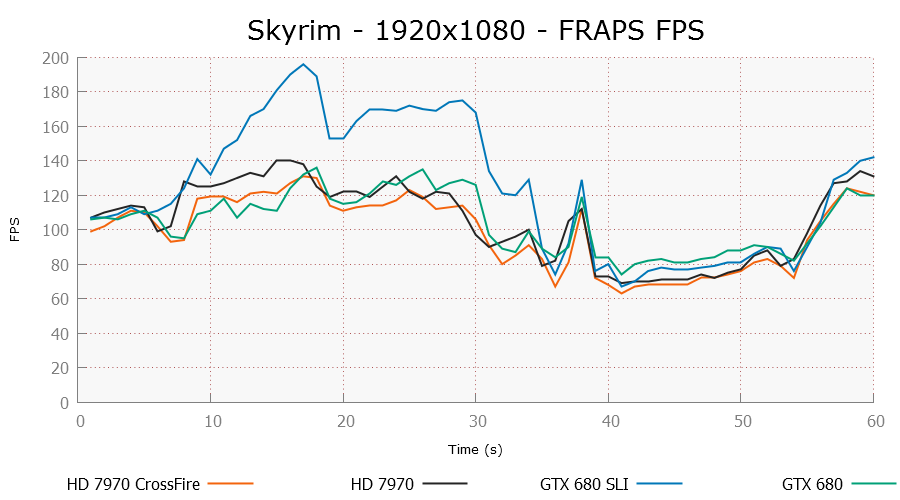 Skyrim continues to be a big game for PC users but is often cited as being CPU bound in some instances.  That obviously isn’t completely the case as we can see the GTX 680 SLI configuration does scale from the 10 second to 30 second section of our test run while the HD 7970s in CrossFire do not. 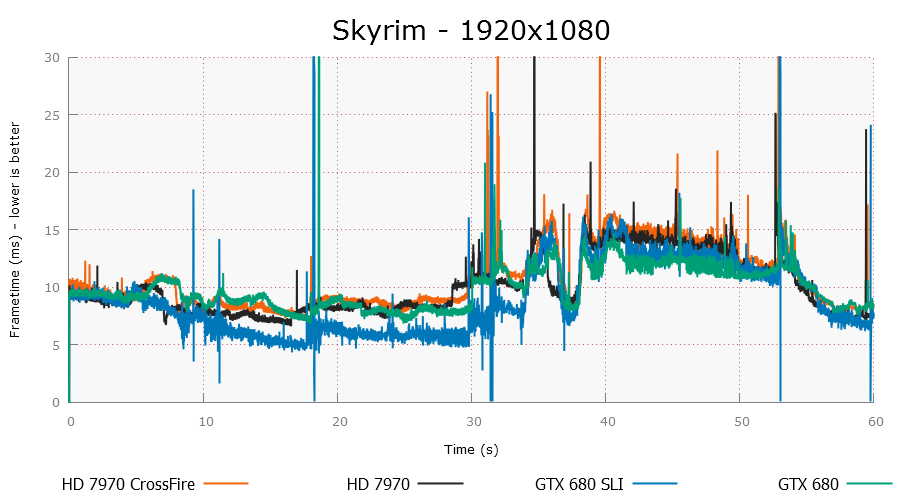 One trait I found in nearly all of our Skyrim testing, regardless of card or configuration, was large stutters or hitches.  You can clearly see them here as spikes in the frame time.  You can also see that the largest variance group is the GXT 680s in SLI and even though the 7970s in CrossFire aren’t seeing any variance they also aren’t improving performance over a single card. 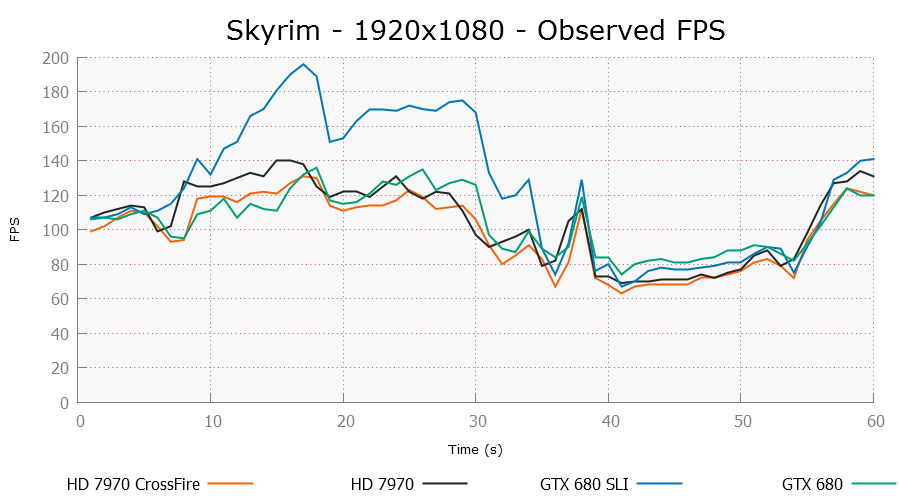 There are no runts or drops in our testing, which makes observed FPS mirror that of FRAPS. 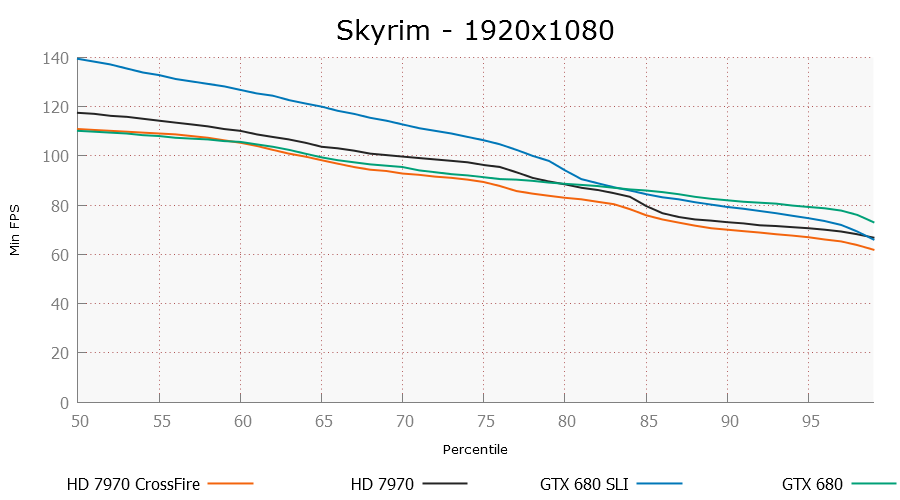 The Skyrim Min FPS percentile graphs definitely look unique from the other games we have tested with more linear pattern.  SLI has an advantage until the 80th percentile mark (though minimal) with all card bunching together at the end. 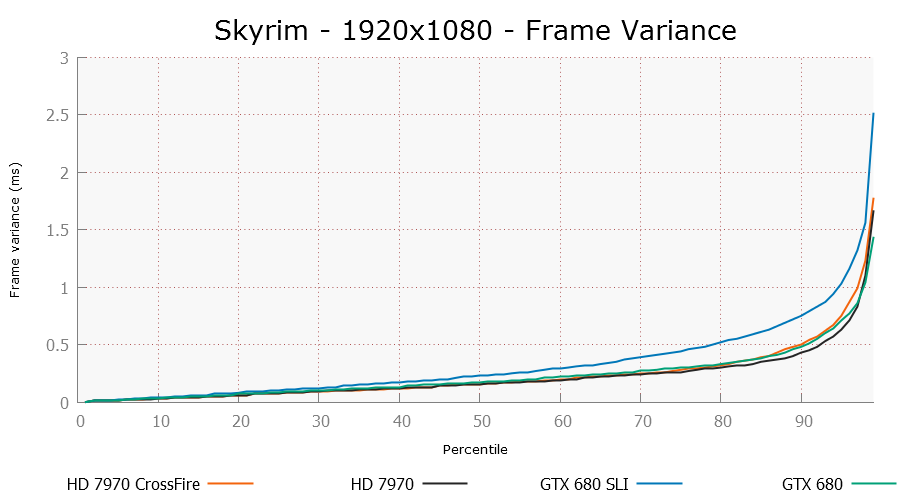 All the frame variance and potential stutter measurements are showing pretty clean results here considering the scale of the graph only reaches 3ms maximum.  What this does NOT really show are the large hitches in game play seen as the spikes in frame times.  Another stutter metric is going to be needed to catch and quantify them directly. 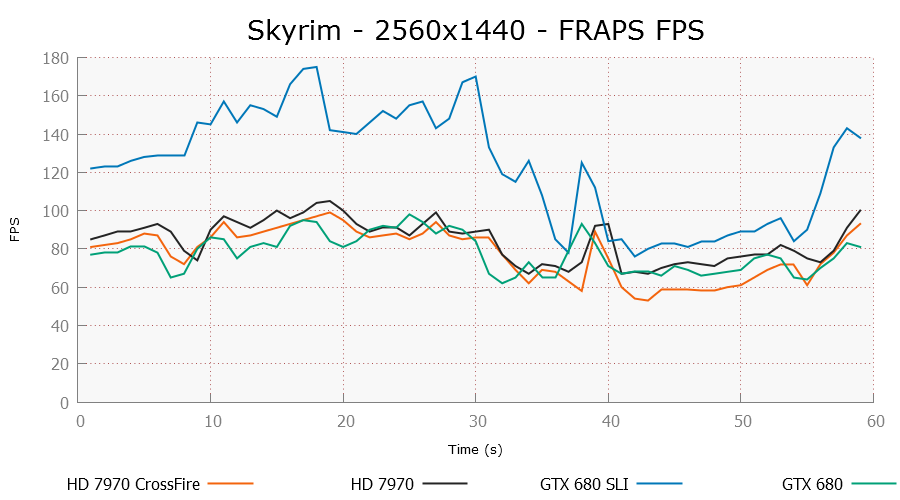 At 2560×1440 with these high powered graphics cards the results look very similar, but with a larger advantage for the GTX 680s in SLI. 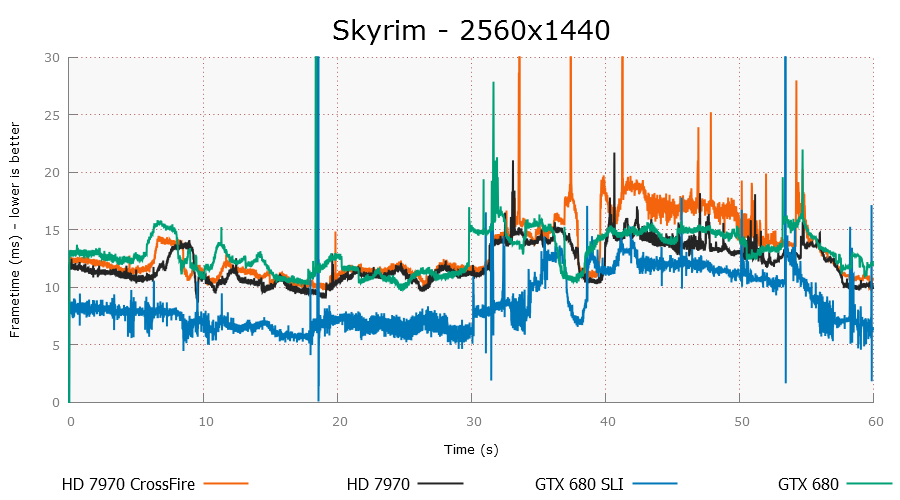 The frame times at 25×14 are again pretty similar to the first resolution with very little gap between the GTX 680, HD 7970 and HD 7970 CrossFire results.  Only the GTX 680 SLI stands out for being a bit faster (lower frame times) and a bit more inconsistent. 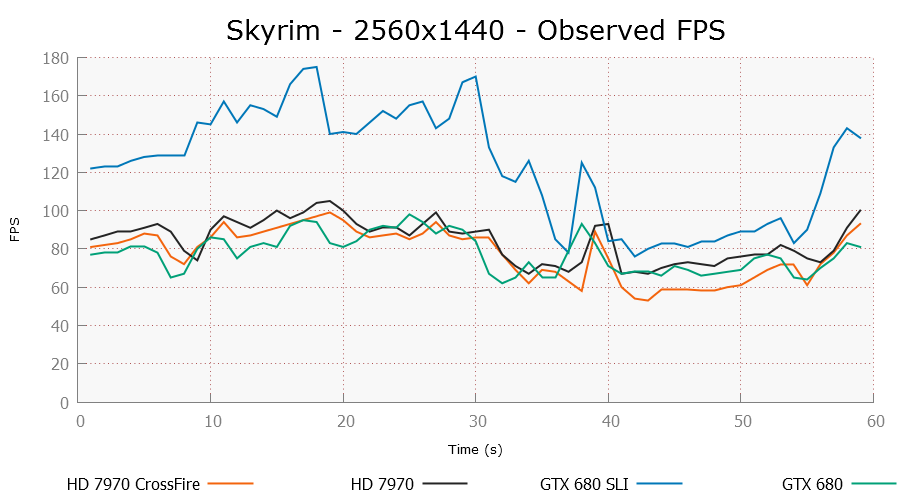 Again, there are no runts or drops so the observed FPS is identical. 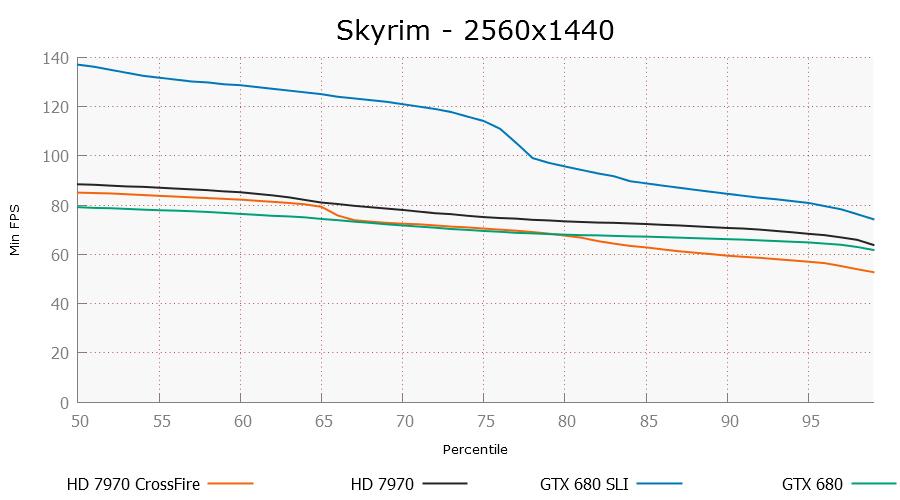 GTX 680s in SLI show up well here with consistently faster frame rates starting with the average of around 140 FPS compared to the 80 FPS of a single card. 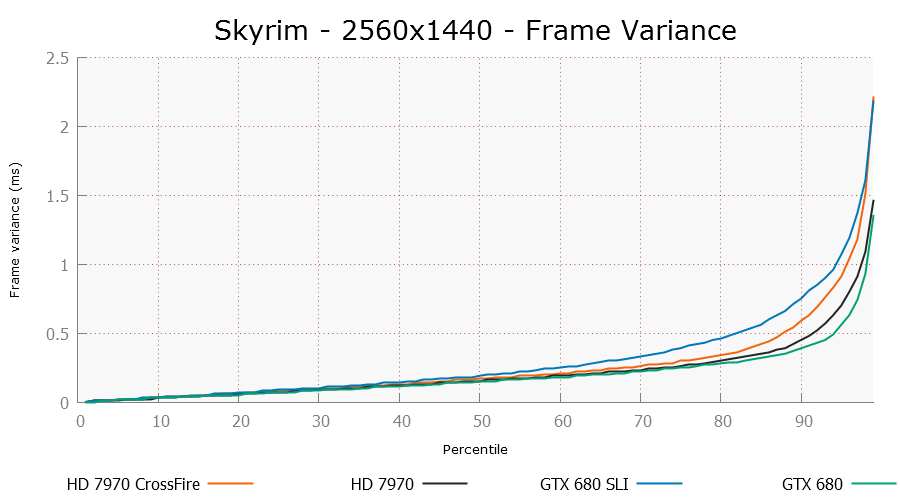 Overall frame variance and potential stutter is low on all of the configurations. 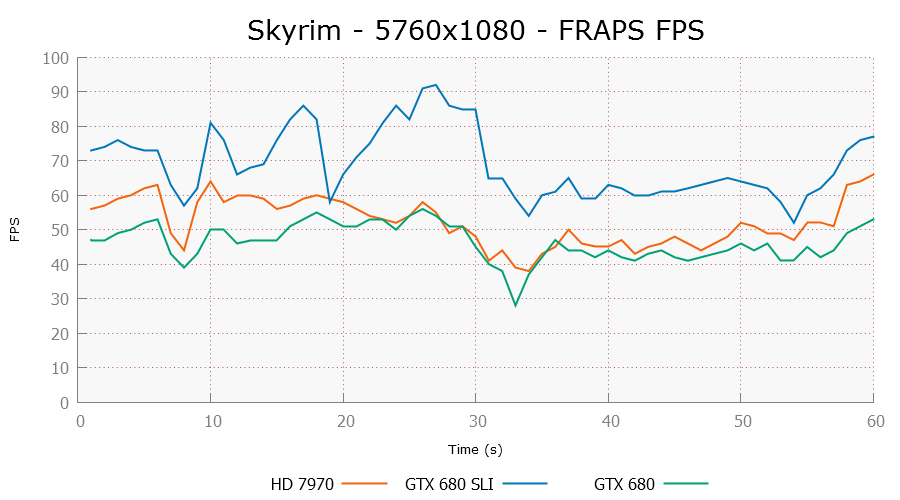 Our 5760×1080 results are sans-CrossFire once again but are still worth showing and without a doubt SLI is making a difference for NVIDIA users. 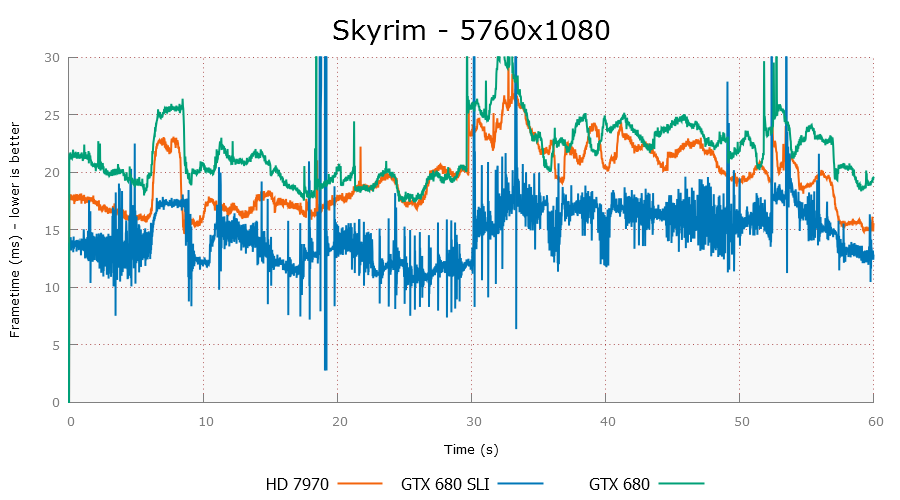 The frame times of both single cards a good and tight resulting in minimal frame rate variance though the SLI results are a noticeably more diverse. 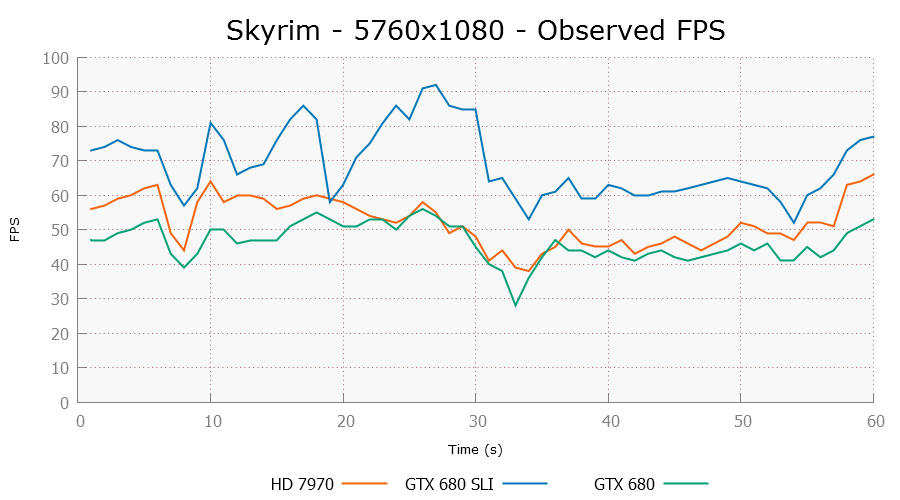 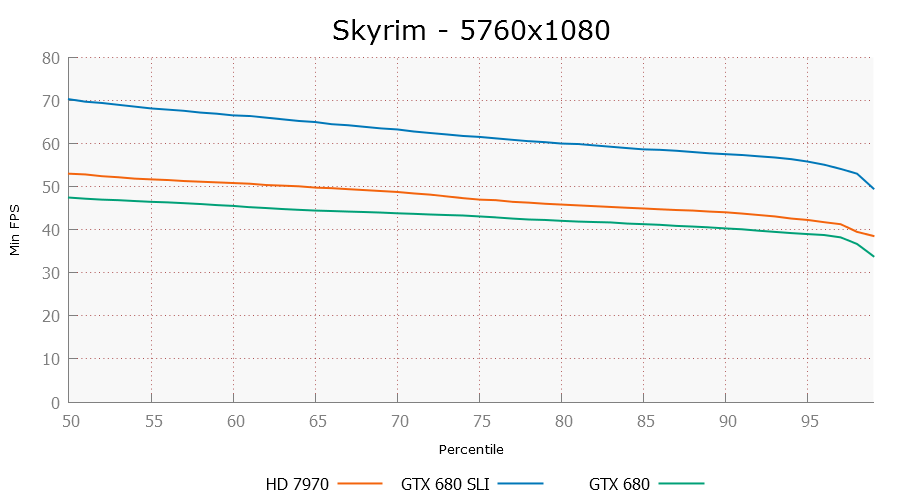 With an average frame rate for the entire run of 70 FPS, the SLI configuration is definitely scaling over the 48 FPS of the single GTX 680. 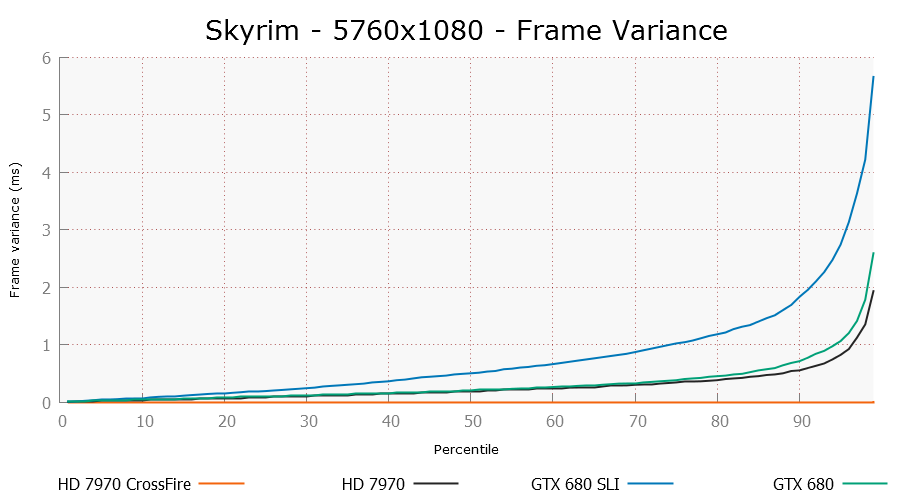 Potential stutter is seen with the GTX 680 SLI results at 5760×1080, but for both the single GPU options are pretty good.

Overall the story with Skyrim is pretty good – it performs well with both single cards from AMD and NVIDIA though only NVIDIA’s GTX 680s see performance scaling up when configured for multi-GPU.  The good news however is that for CrossFire owners, the situation doesn’t get WORSE.