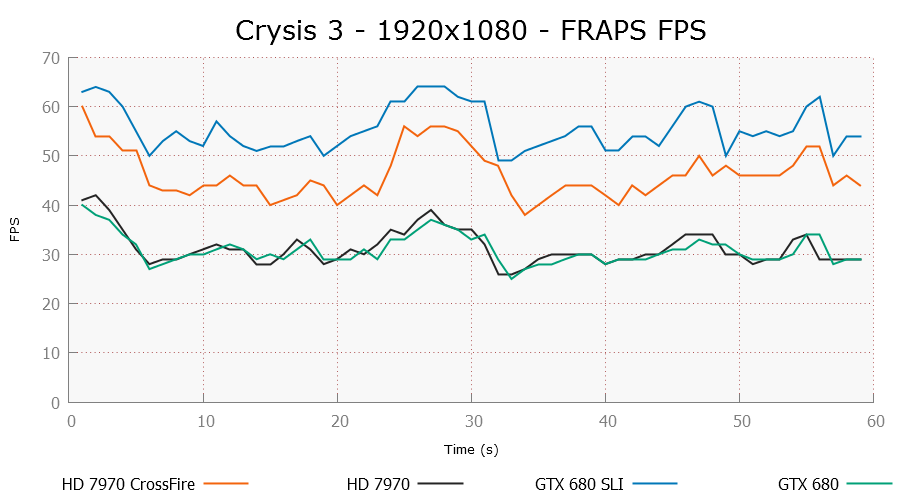 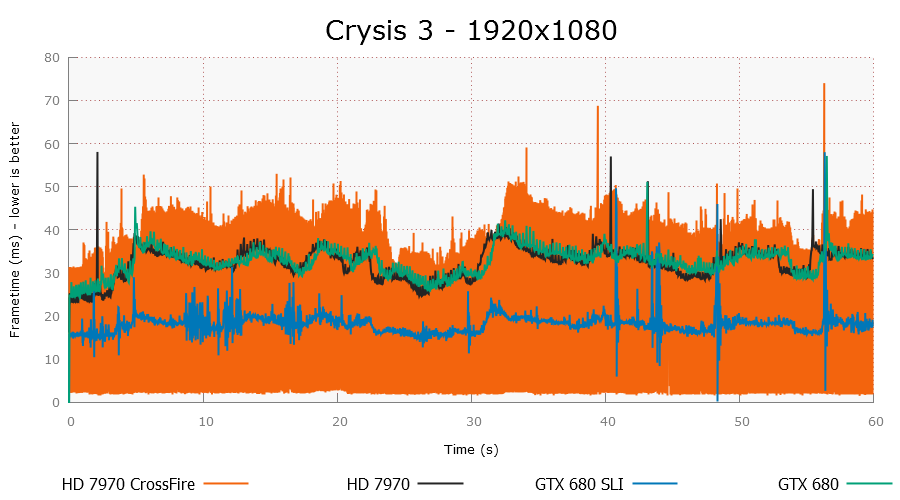 The frame time plot from our Frame Rating system shows another instance though of CrossFire’s inability to keep consistent animation on the screen.  The single card configurations are pretty consistent with each other but both also exhibit some tiny bumps in frame times on a repeating pattern, obviously a particular of the CryEngine.  SLI does have some increases in frame time variance across the board with a few minor “hitches” as well.  CrossFire though appears to be alternating between 2ms frame times and up to 50ms frame times resulting in… 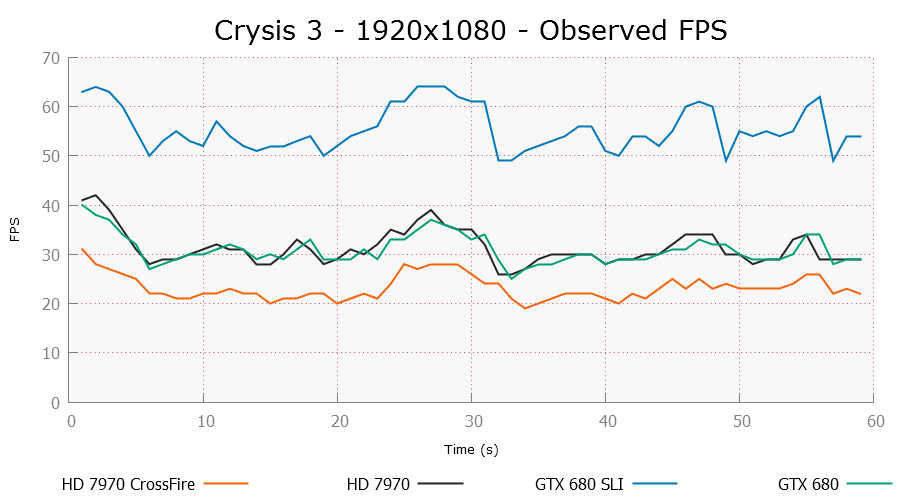 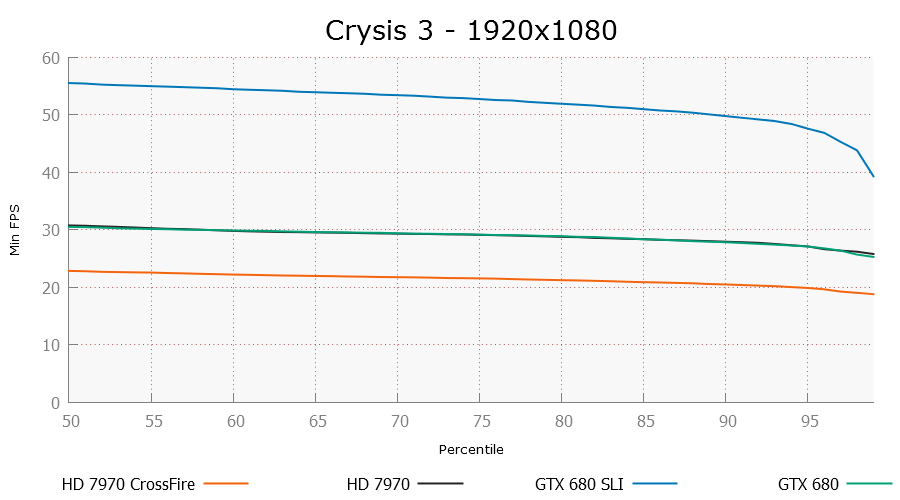 SLI looks fantastic in this graph and is able to take the matching performance of the GTX 680 and HD 7970 up from 30 FPS average for the entire run to 57 FPS. 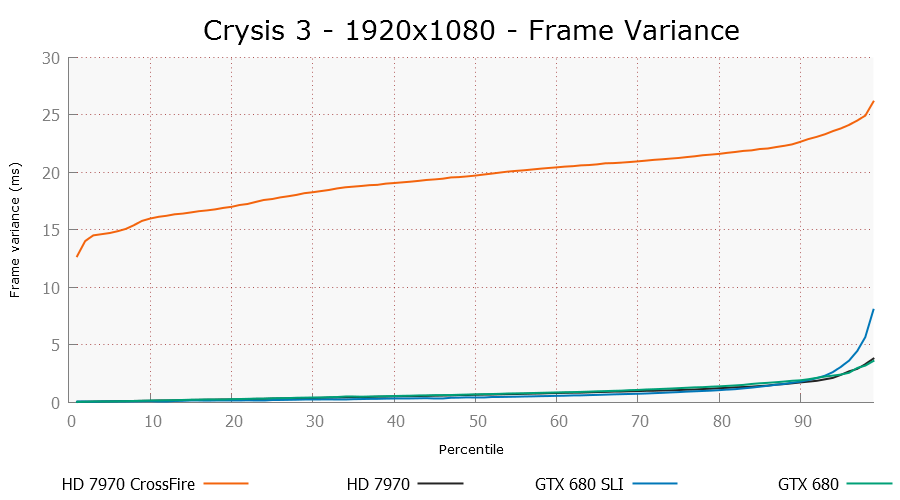 Our custom ISU rating tells me that the GTX 680 SLI configuration looks GREAT and only differs from the single card configurations at 95% and above percentile.  The HD 7970 in CrossFire though shows huge amounts of variance from the outset and in fact does exhibit a lot of stutter in game as well. 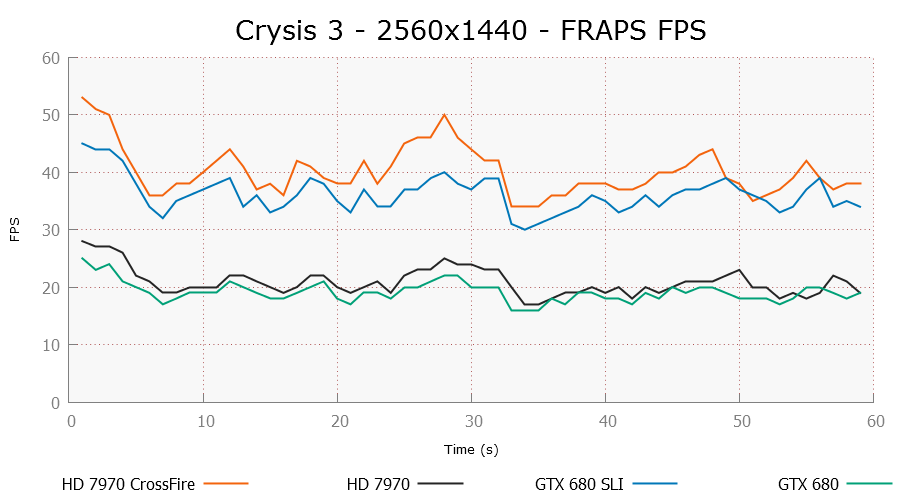 At the higher resolution the single card HD 7970 as a slight edge over the GTX 680 this time around and this time the scaling of CrossFire appears to be faster than SLI. 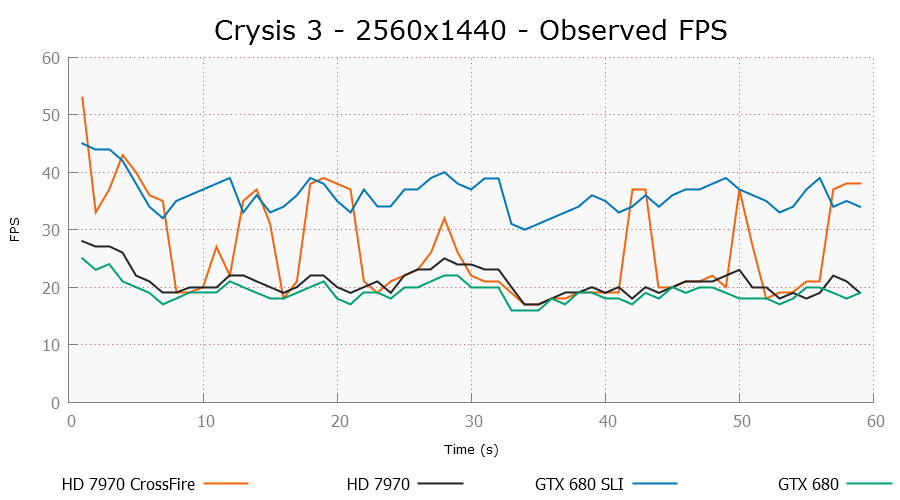 A quick glance at our results from the observed frame rate clearly shows that isn't the case though as only in short bursts does the CrossFire experience actually match that of the dual GTX 680s in SLI. 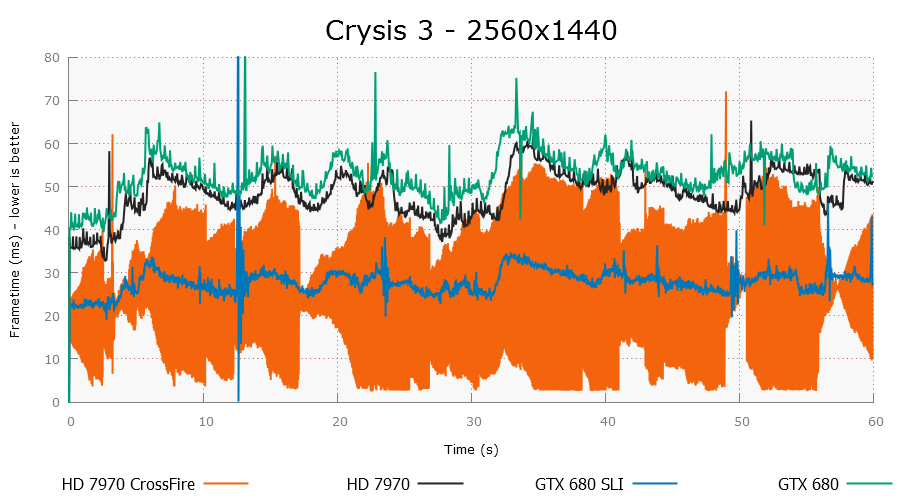 Our frame time plot indicates where the alternating frame times in Crysis 3 occur with CrossFire and how it relates to the performance of SLI.  Other than the single large hitch seen at the 12 second mark or so in SLI, the GTX 680s handle Crysis 3 much better. 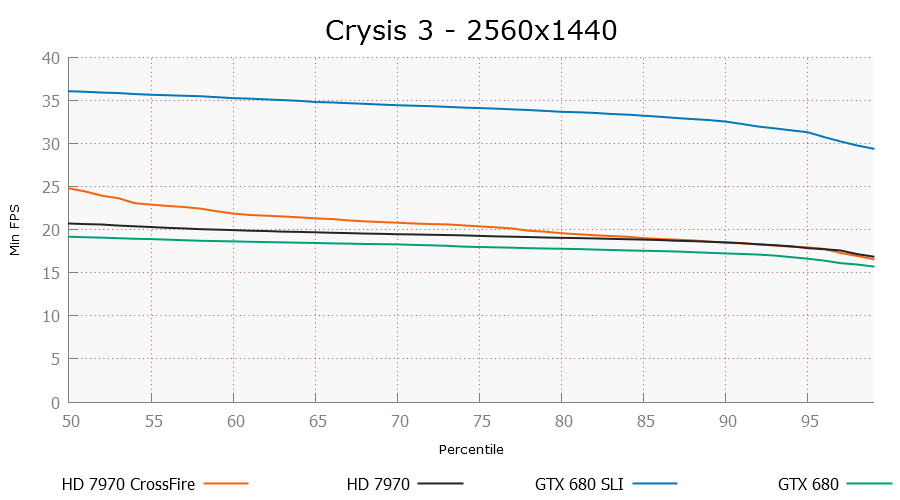 The GTX 680s are able to scale from about 19 FPS on average to 36 FPS – a solid 89% scaling factor.  The HD 7970 GHz Edition cards are not so impressive, only going from 21 FPS to 25 FPS but that quickly falls down to just even performance with a single card. 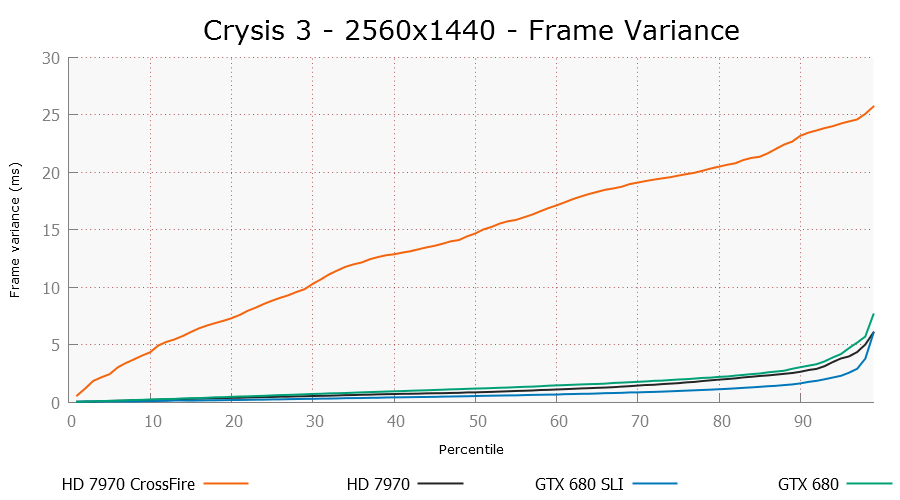 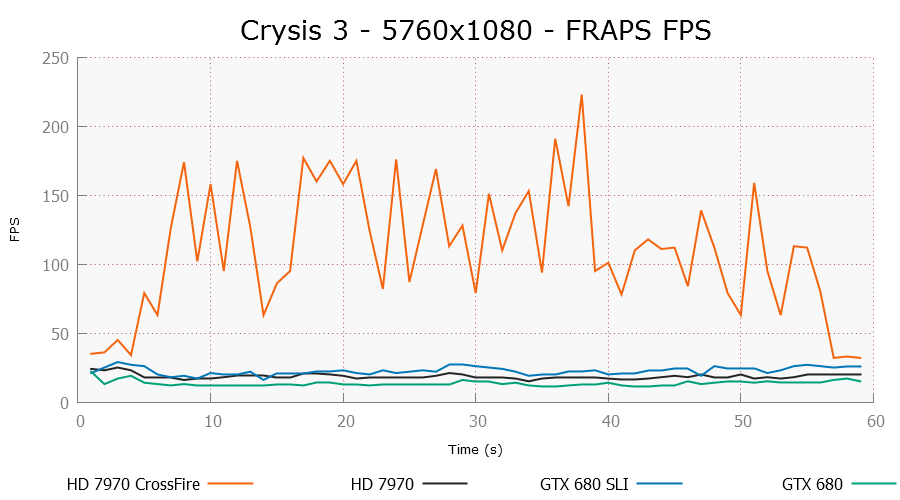 This is one of the few Eyefinity runs for the HD 7970 CrossFire configuration that was able to run until completion and generate the necessary graphs for us.  So we’ll finally get to see some interesting results.  Even at first glance, we can tell that something here isn't quite right.  According to FRAPS, the HD 7970 is pushing out more than 200 FPS to the screen on Crysis 3 at 5760×1080, which is obviously inaccurate. 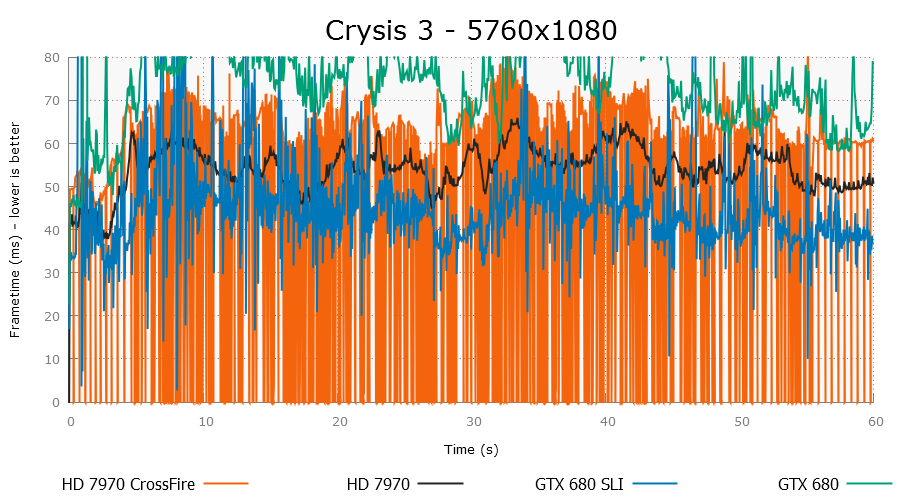 Ouch, there are definitely some problems here, not the least of which is the graphs poor setting of range maximums (will fix soon!)  Notice the spots on the plot of the orange line (HD 7970 CF) where there is no data – that indicates a dropped frame and a lot of frame time variance. 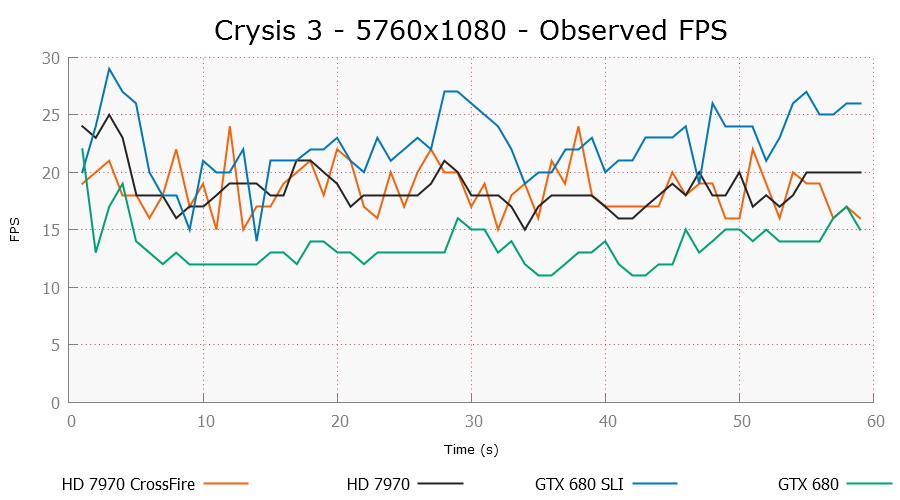 Removing those and any runts we find that the observed FPS is actually right in line with that of the single HD 7970 graphics card.  Also, without the CrossFire misreported results out of the window, the update scale helps us see the scaling that the GTX 680s in SLI. 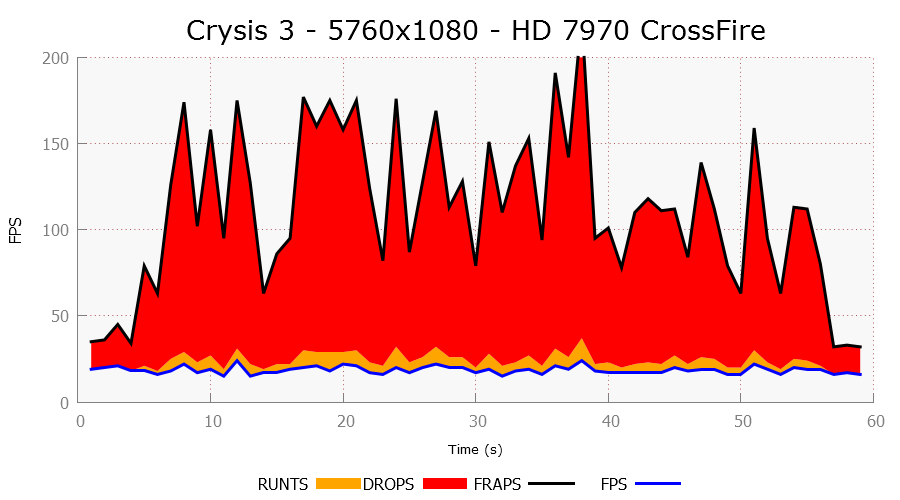 Here again is another one of our RUN files to show you the affects of dropped frames on Eyefinity testing.  FRAPS based frame rates sky rocket up though the observed frame rate is much lower, in line with a single HD 7970 GHz Edition card.  There are some runts involved in this but the biggest factor is obviously the dropped frames (missing colors in our pattern). 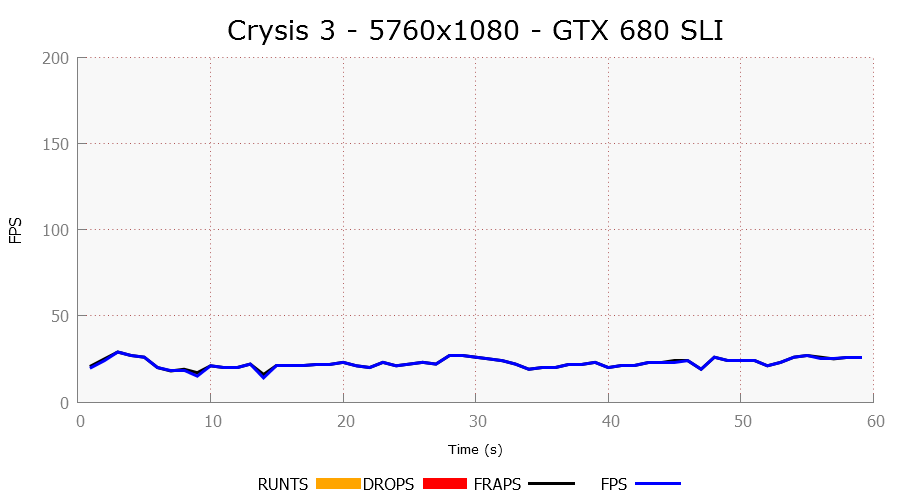 Again, for comparison, here is the RUN graph for the GTX 680s running in SLI at 5760×1080.  Notice that the frame rate is consistent with no drops or runts. 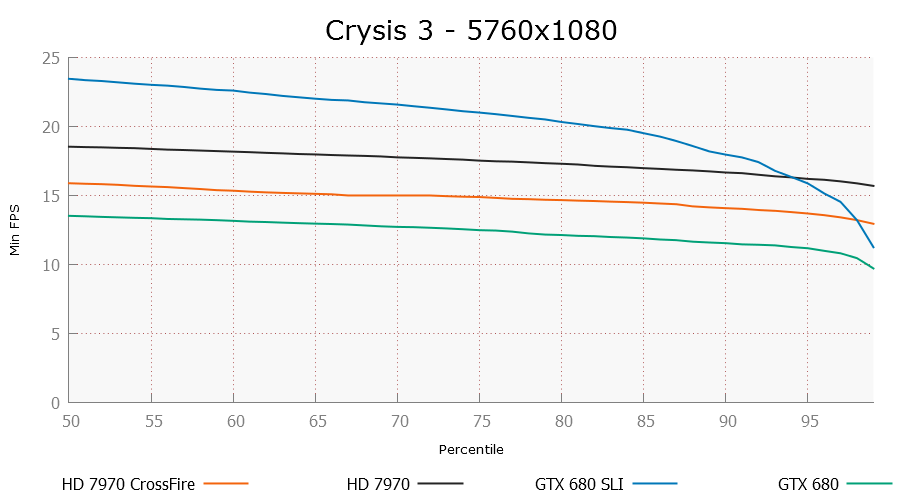 Interesting results here with the CrossFire setup taking a lower position across the board in our percentile minimum frame rate graphs. Also, we see the pair of GTX 680s in SLI start out much faster than anything else tested but at the 94th percentile or so fall below that of the HD 7970. 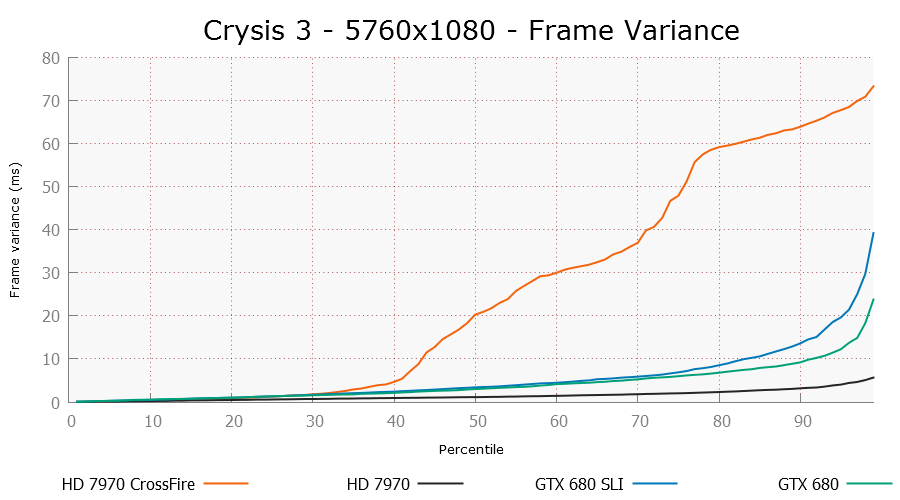 Keeping mind that we are looking at pretty low frame rates across the board, the HD 7970 has the best overall result here in our ISU graph with the least amount of frame variance over the course of our 60 second run.  Obviously CrossFire has a big issue once again and see significant variance starting at the 50th percentile and it only gets worse from there. 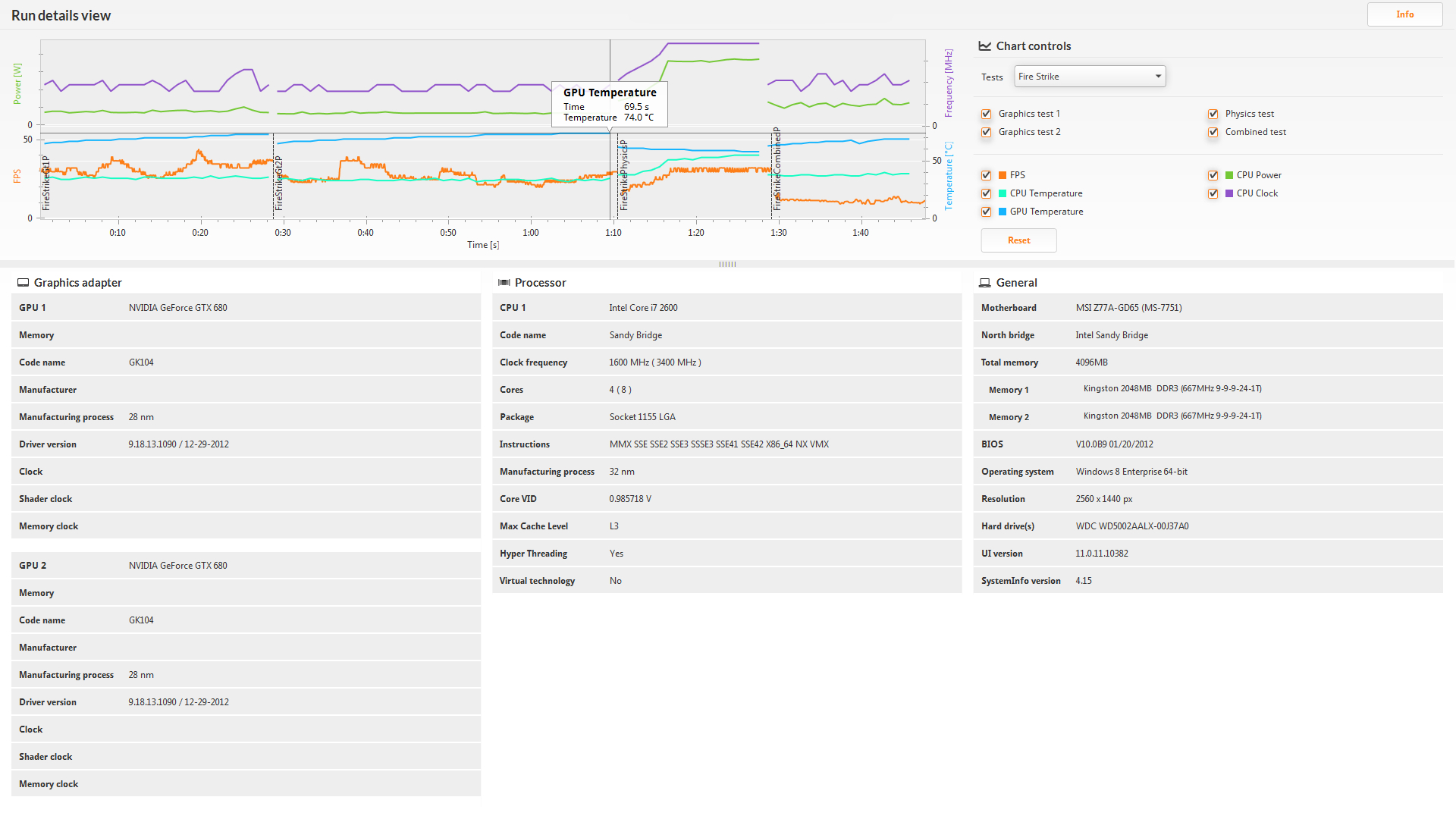