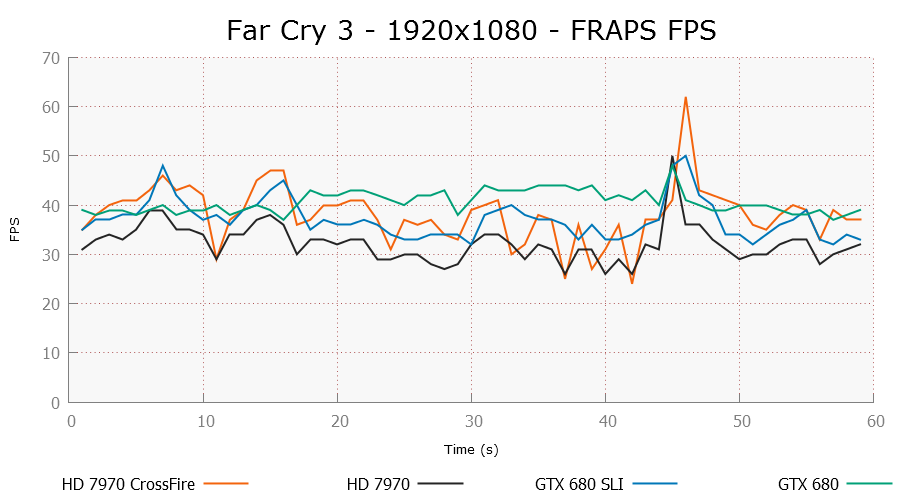 Far Cry 3 is an interesting beast of a game in that it has its own inherent problems with stuttering and frame rates to deal with.  At first glance at 1080p neither platform is scaling well with multiple GPUs even in the FRAPS results. 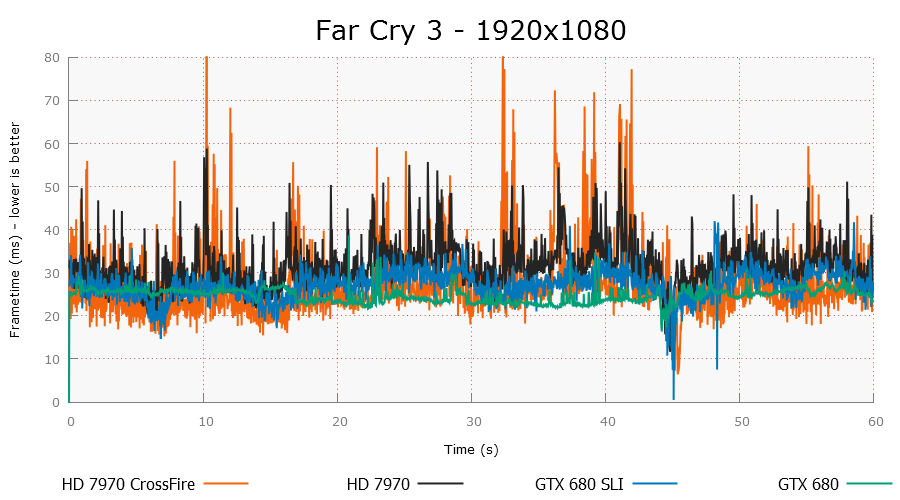 Eeep, that doesn’t look good.  Only the green bar of the GTX 680 single card is anywhere close to “tight” with even the single card Radeon HD 7970 looking poor.  Multi-GPU systems show variance across the board including the GTX 680s in SLI. 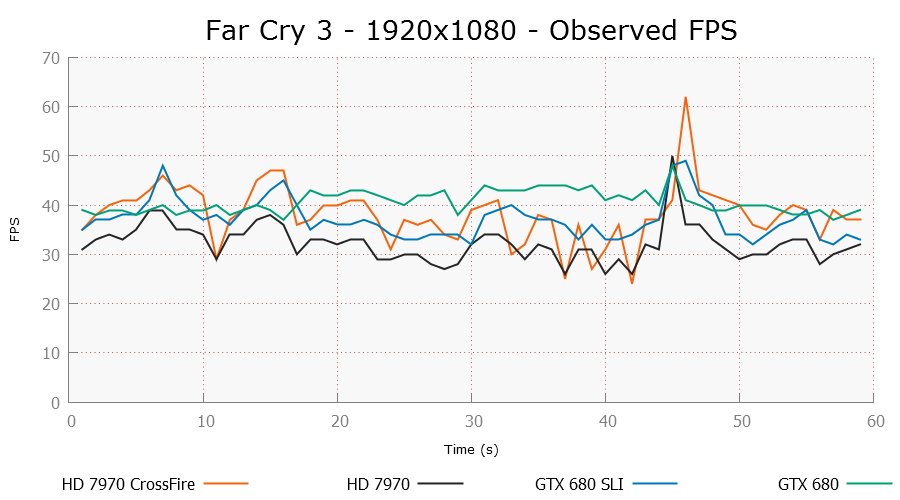 None of those frames are considered runts though based on percentages so the observed FPS is actually the same as FRAPS. 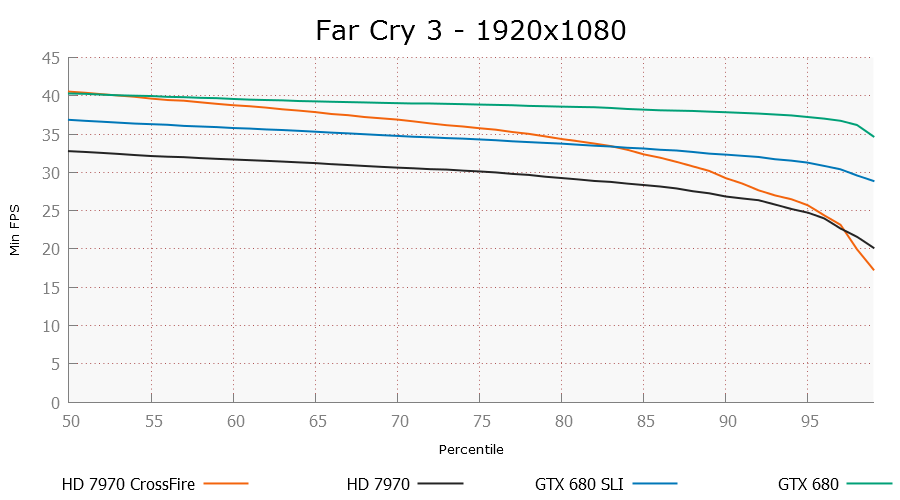 There isn’t much of a gap between the top cards and bottom cards at the 50th percentile of our Min FPS chart and in fact the single GTX 680 is the best of the bunch.  The single HD 7970 is definitely less consistent but while CrossFire starts out good, it falls quickly behind the single GTX 680. 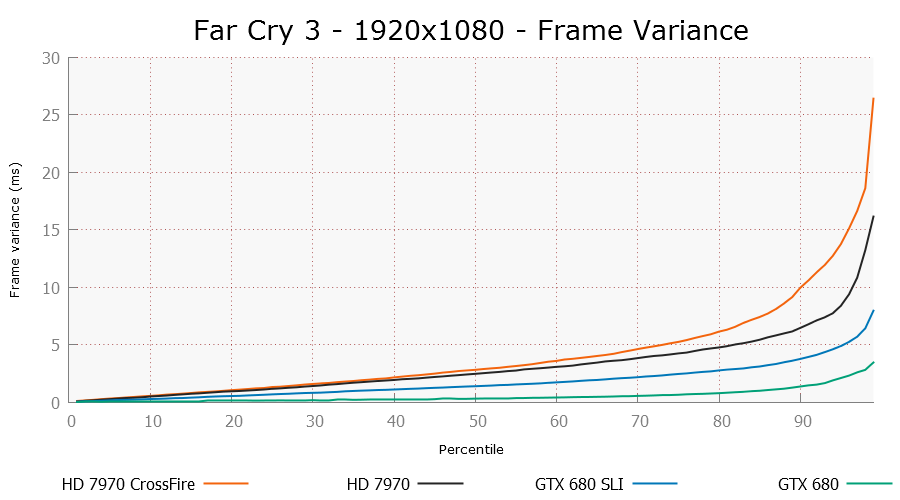 In almost direct correlation to the concluding portion of the Min FPS graph, our frame variance shows the GTX 680 to be by far the most consistent GPU in the field.  This is a perfect example of how higher overall frame rates do NOT equate to producing the best user experience. 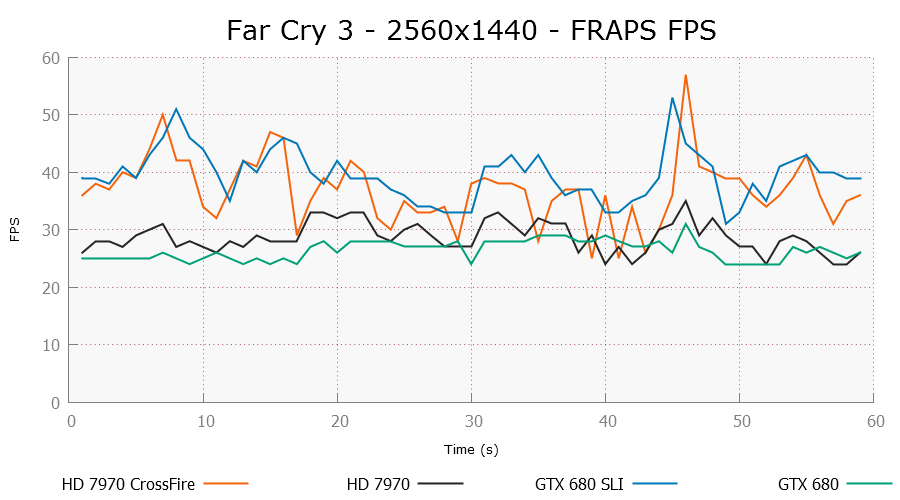 Both SLI and CrossFire appear to scale a little better at 2560×1440 but nowhere near as much as we would expect with this heavily GPU-bottlenecked game. 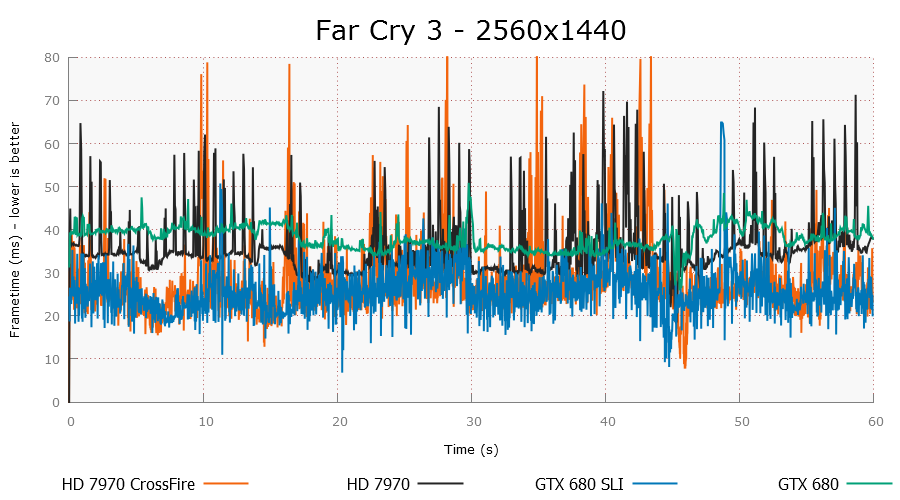 Looking at the plot of frame times we can see that both SLI and CrossFire are showing huge variances in consecutive frame times but CrossFire definitely has higher spikes of higher frame times / lower frame rates. The single GTX 680 is the most consistent result even though the general trend of the HD 7970 is that it is faster overall. 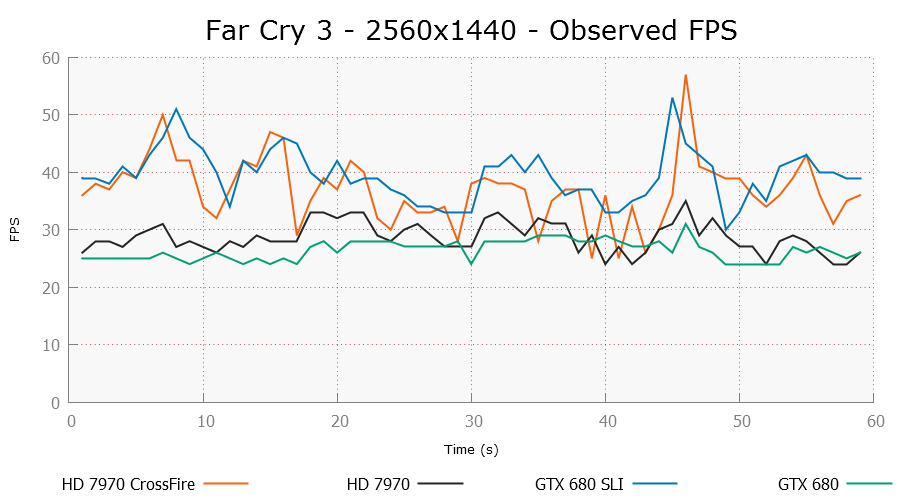 Again, there are no runts in our testing of ANY configuration so the observed FPS is the same. 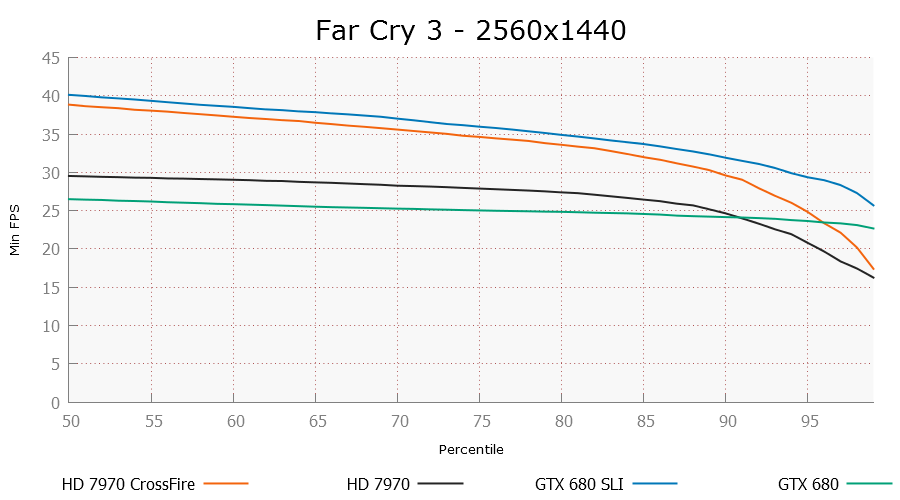 The GTX 680s and HD 7970s in multi-GPU mode track each other pretty consistently here though they offer minimal frame rate improvements as the time progresses.  Interestingly, while the GTX 680 single card is slower than the HD 7970, the NVIDIA card is much more consistent and at the 90th percentile or so of frame times is actually faster as well. 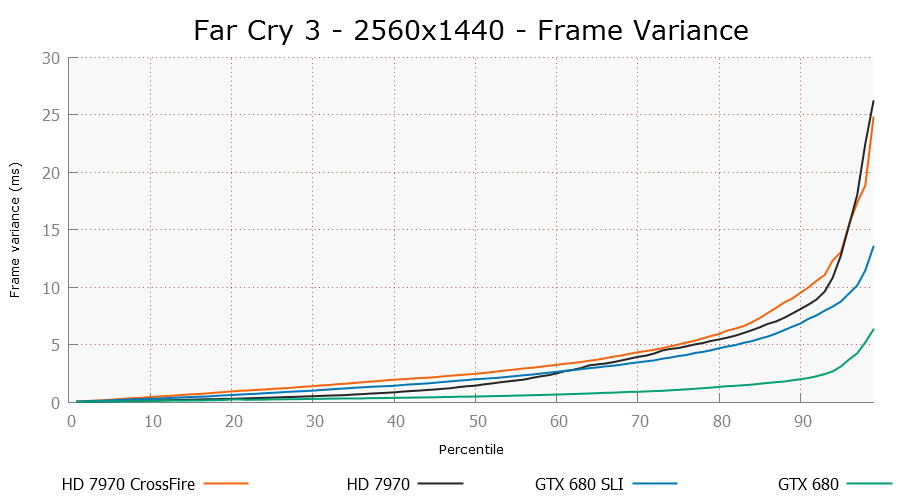 This complementary graph to the percentiles above demonstrates the benefits of “smoothness” of frame rates as opposed to just higher average frame rates.  NVIDIA’s single GTX 680 produces the least variance throughout while the HD 7970, even in single card form, nearly tracks with the inconsistent multi-GPU options. 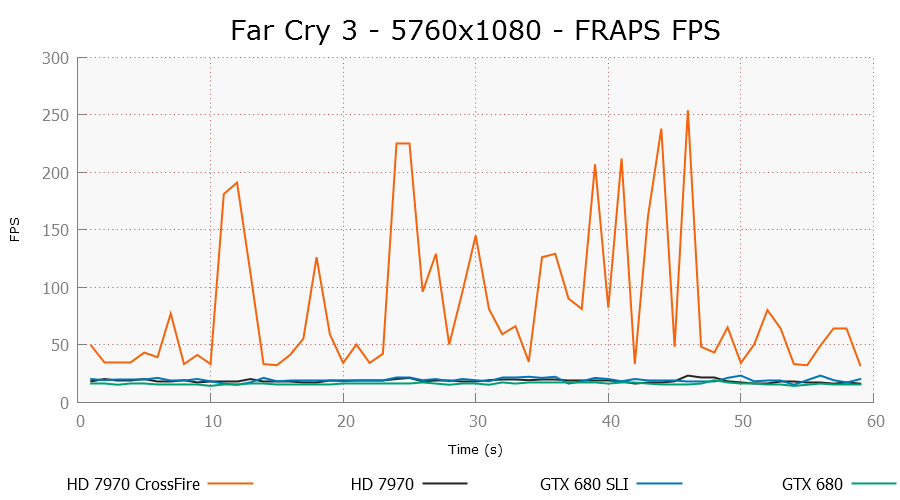 So… this is interesting.  Even though we saw NO runts or dropped frames in the 19×10 or 25×14 results, we are seeing an obvious issue with the Eyefinity results.  Let’s continue on… 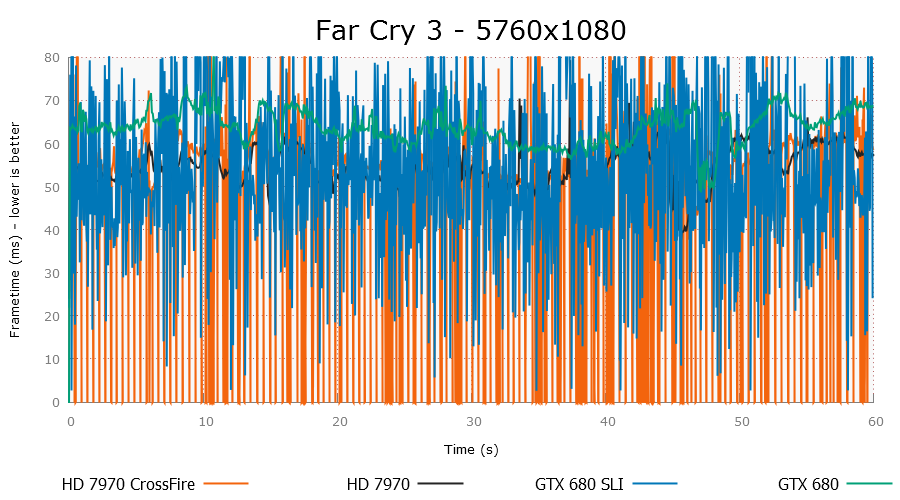 Ah ha, there we go.  This graph is showing us TONS of dropped frames in frame times and also a lot of variance in the SLI results as well. 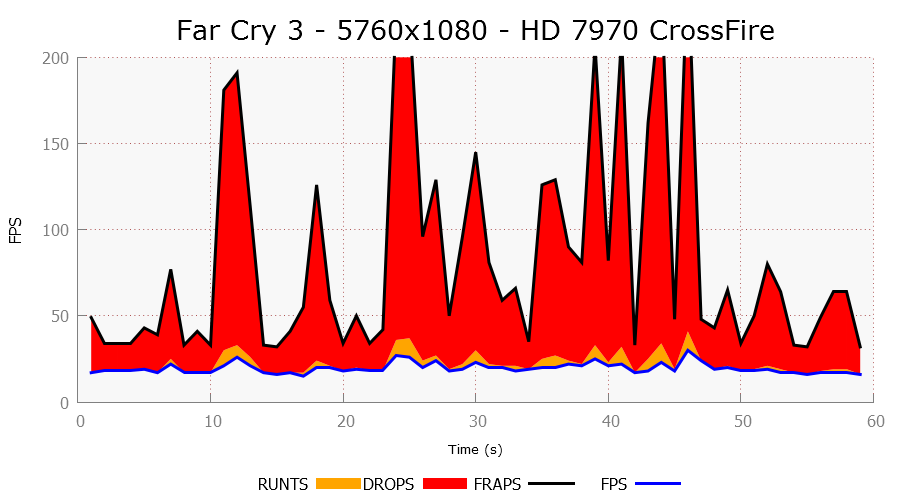 All of that red you see is a dropped frame, often times more than one in a row. 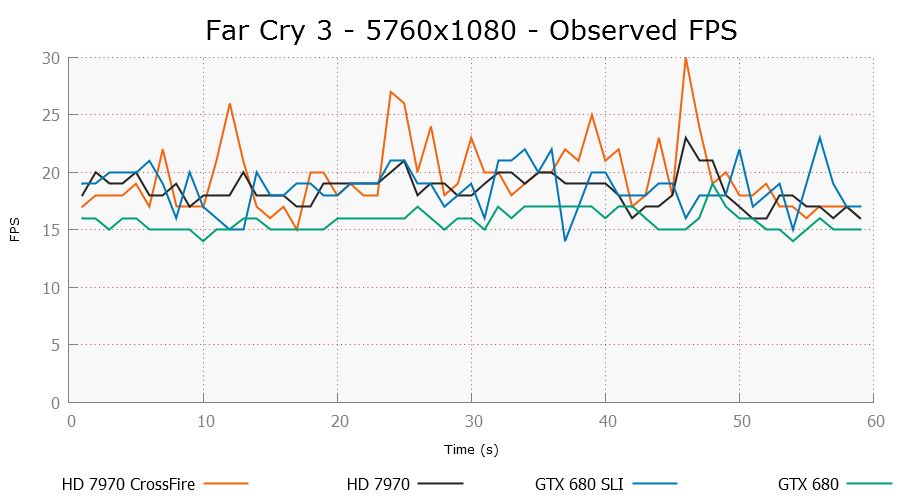 The observed FPS brings the CrossFire HD 7970s back down to Earth but also shows a clear lack of scaling with two GPUs for both camps. 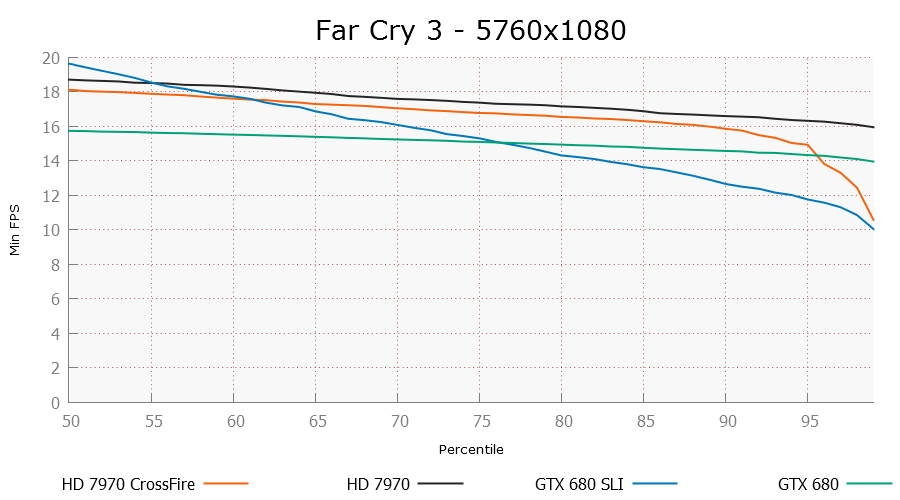 The Min FPS percentiles graph lists both the GTX 680 and the HD 7970 as pretty consistent though both CrossFire and SLI have problems. 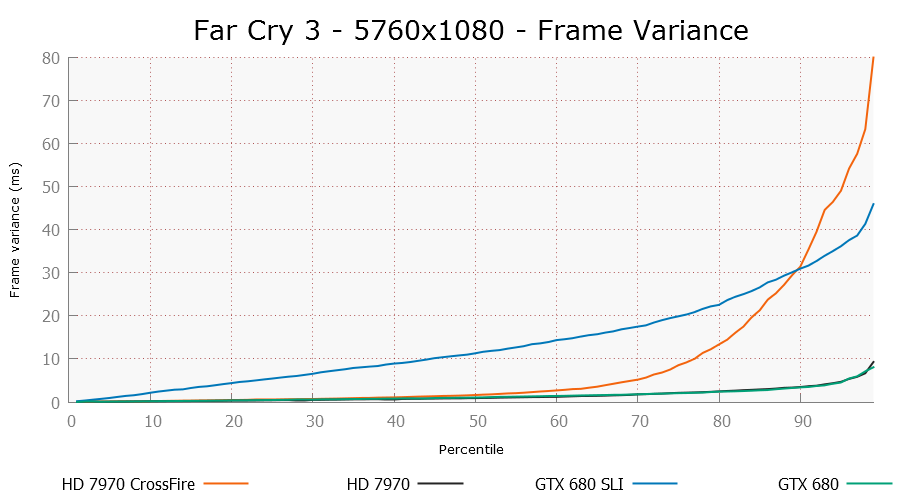 Our ISU (International Stutter Units) graph paints an interesting picture of the multi-GPU configurations.  While both are bad, the GTX 680 SLI setup is bad from the outset, whereas AMD’s CrossFire HD 7970s has the widest variances as seen after the 90th percentile mark.