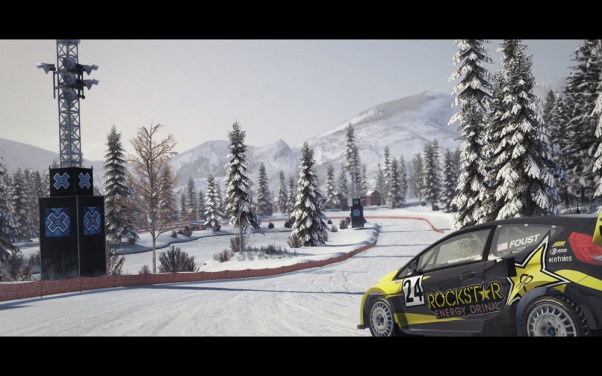 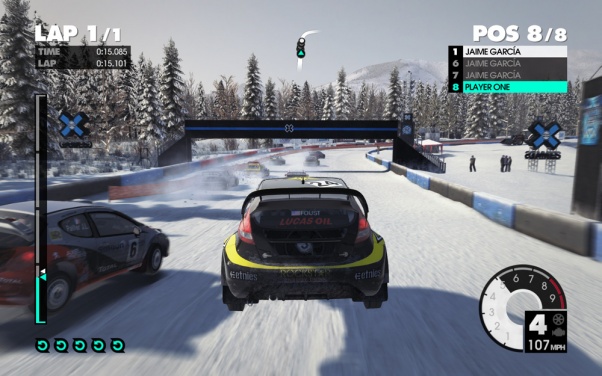 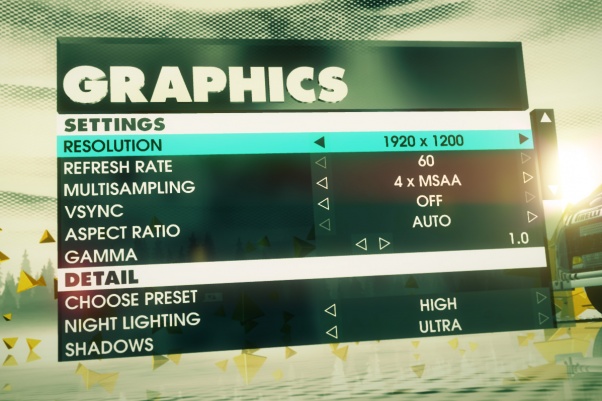 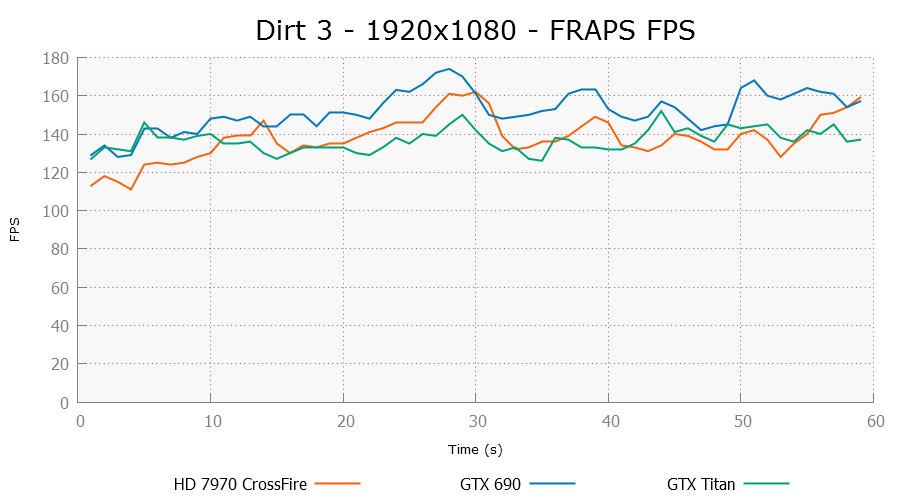 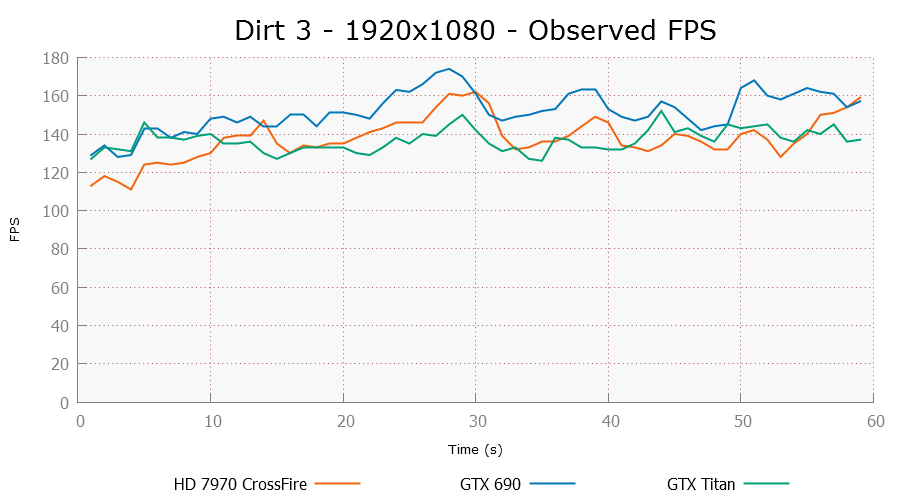 Dirt 3 was a game in our first article that actually shows CrossFire performing closer to traditional expectations, and in this case the same is seen again.  The FRAPS based frame rate averages and our observed frame rates are basically identical at 1920×1080 and all three cards run this game exceedingly quickly. 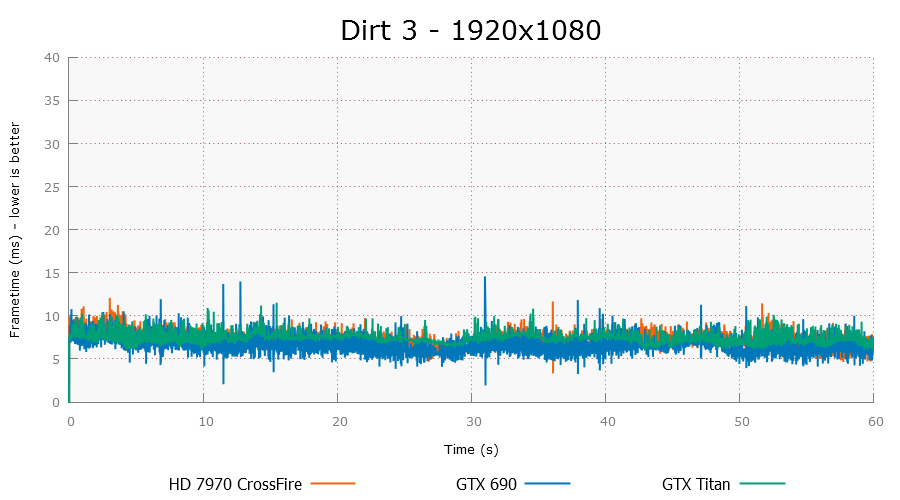 The plots for Dirt 3 at 19×10 all show solid results – frame times only vary between 4ms and 10ms (with the occasional spike) result in high frame rates and solid responsiveness.  The GTX 690 (blue) numbers kind of hide the HD 7970s in CrossFire results (orange) meaning the frame times are in the same ballpark.  The GTX Titan shows a tighter overall frame time variance as expected with its single GPU. 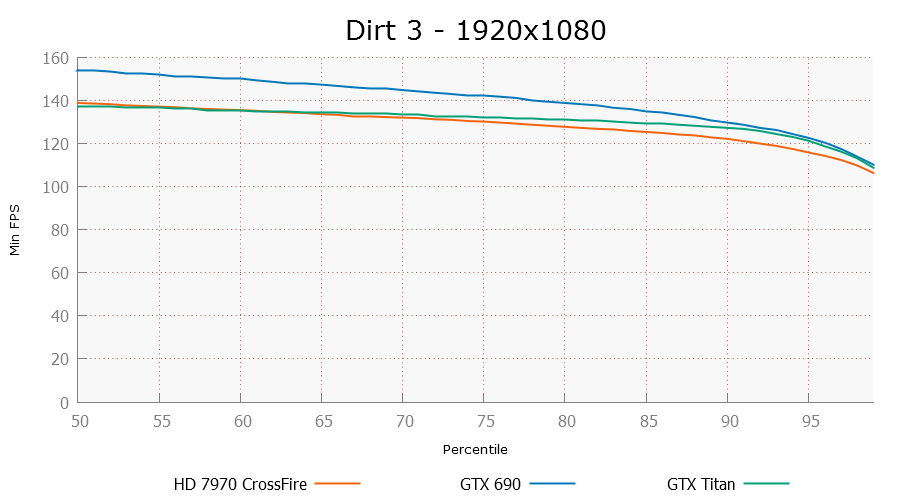 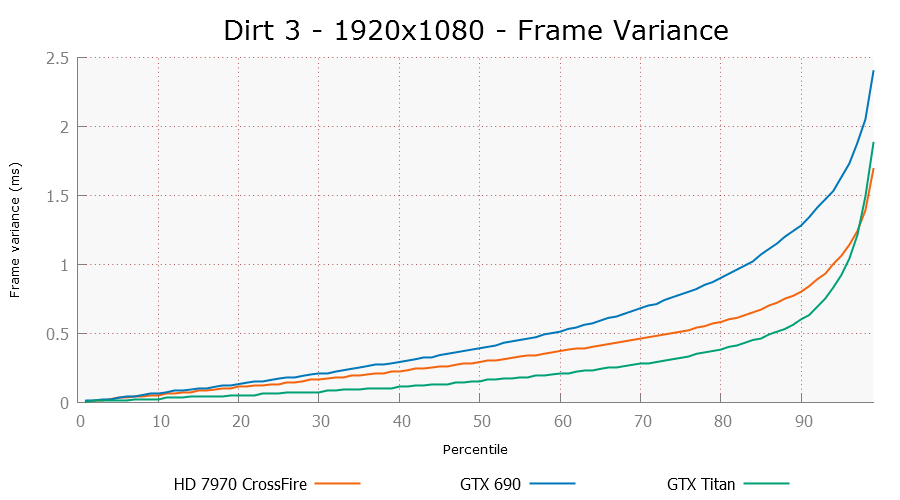 This frame time variance graph that would show potential stutter kind of looks like it might paint a bad picture for the GTX 690 but keep in mind that the scale on the y-axis is only peaking at 2.5ms – none of these cards are proving to be a problem. 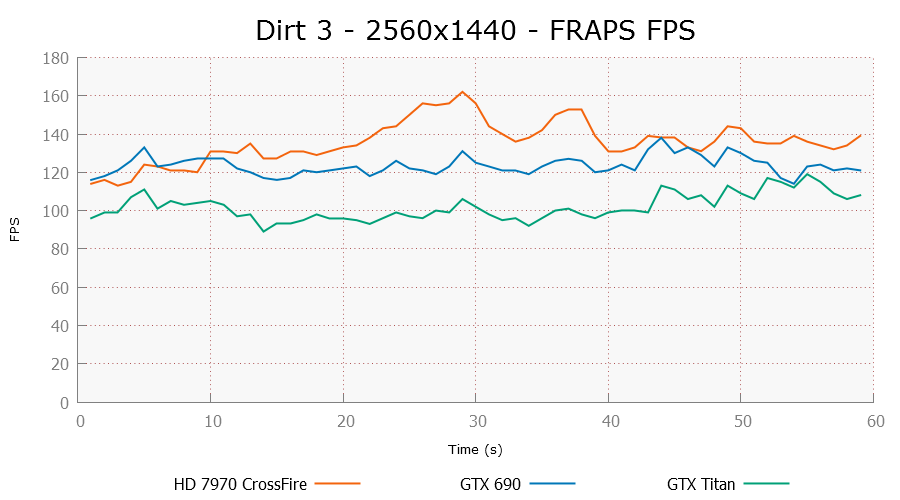 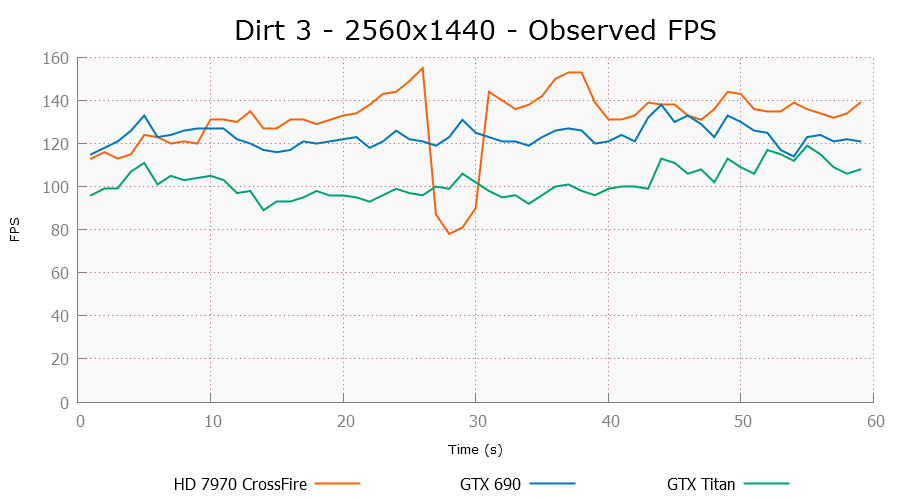 At 2560×1440 the HD 7970s have a single span of poor performance where the runt frame issue crops up, and in that area the observed frame rate is much lower than the FRAPS reported speeds.  Otherwise, the HD 7990 will likely perform better than both the GTX 690 and GTX Titan with the Titan taking the third spot. 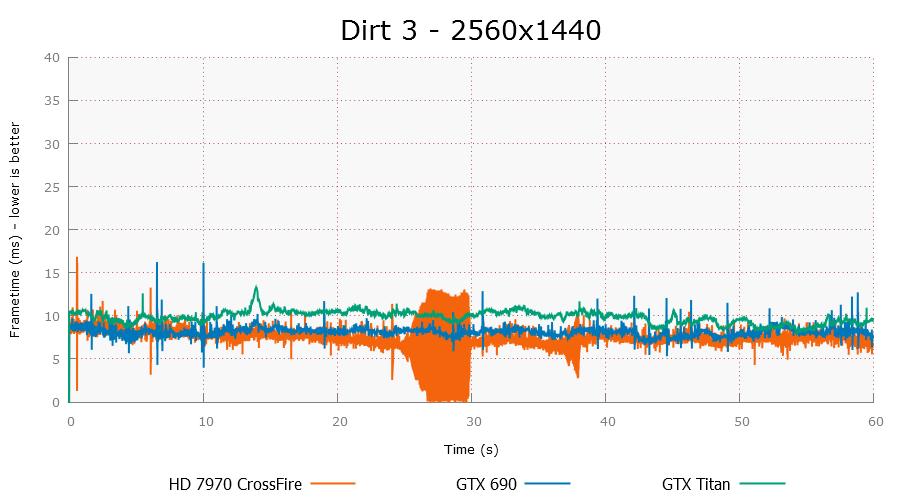 Frame times actually look pretty good for all three cards again with the obvious exception of that blotch of orange in the middle.  However, the rest of the HD 7990 times and even the GTX 690 results show a MORE consistent frame rate than we saw at 1920×1080 which tells you that the CPU is becoming less of a bottleneck. 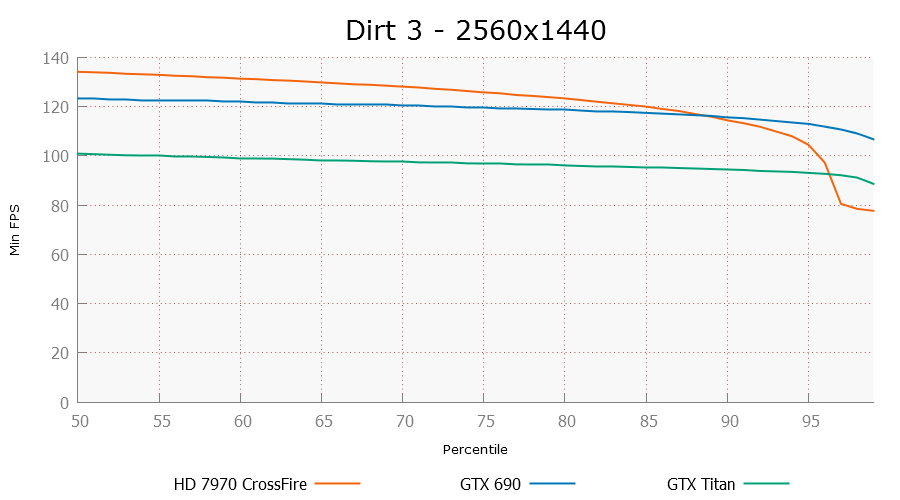 The single hiccup of runts draws the minimum FPS percentile data down towards the end of the graph for the HD 7970s but otherwise the AMD cards looks pretty solid again.  The GTX 690 is running away from the performance of the Titan here. 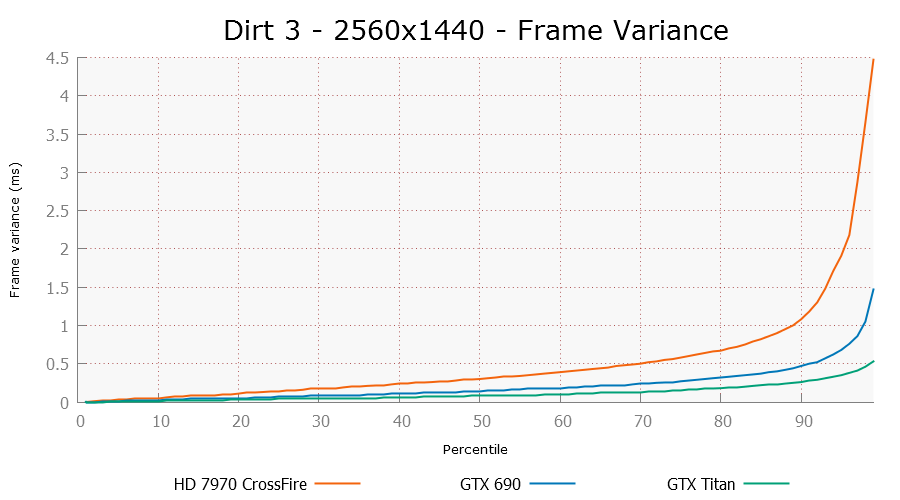 Frame time variance is still pretty good for the two NVIDIA options here though you can see where the differences are between the GTX 690 and the GTX Titan. 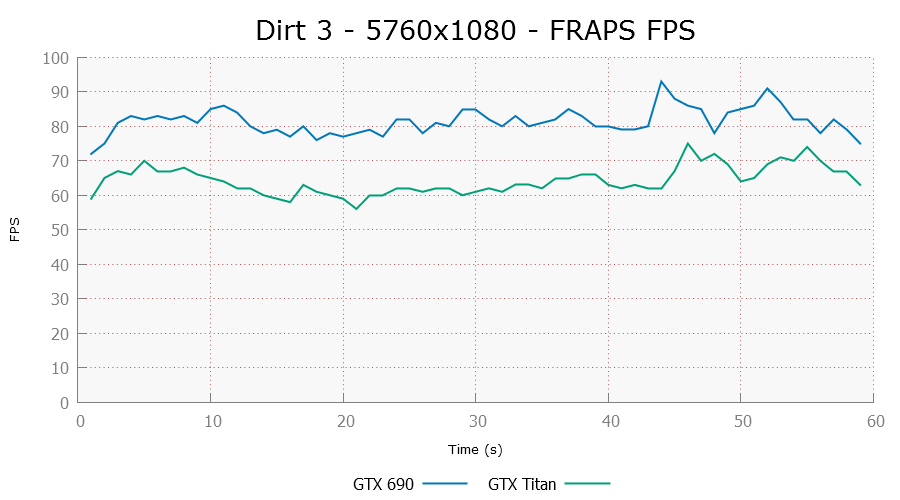 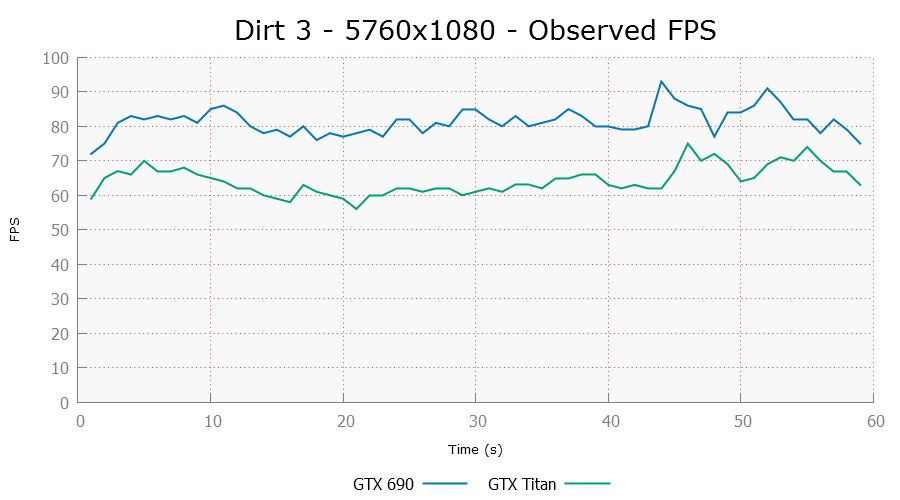 Without proper data from the ailing AMD Eyefinity setup, we are only comparing GTX 690 and GTX Titan results – both of which are identical between the FRAPS frame rates and observed frame rates. 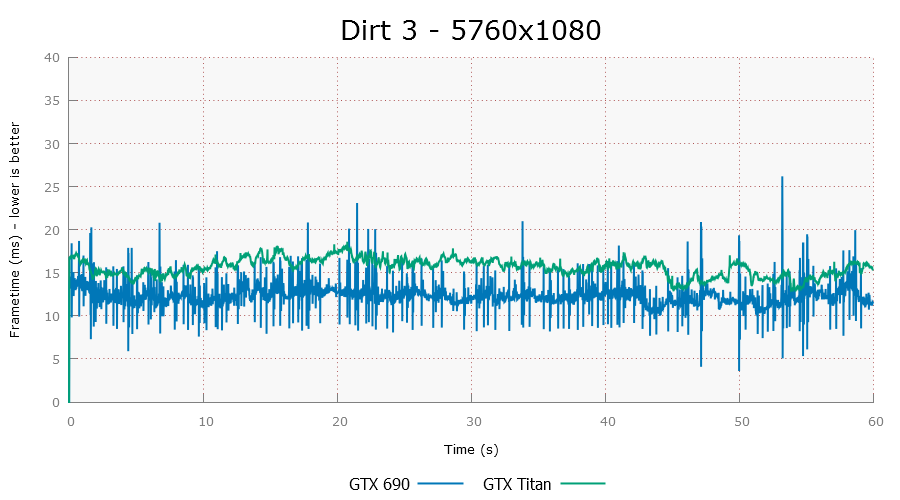 The plot of frame times shows very compelling reasons why the single GPU cards can still offer advantages over dual GPU cards that many might consider "slower".  Notice how much more consistent the frame times are for the GTX Titan and that the spikes in time taken to render on the GTX 690s are non-existent.  This is also helped by the 6GB of frame buffer on Titan (compared to 2GB per GPU of the GTX 690). 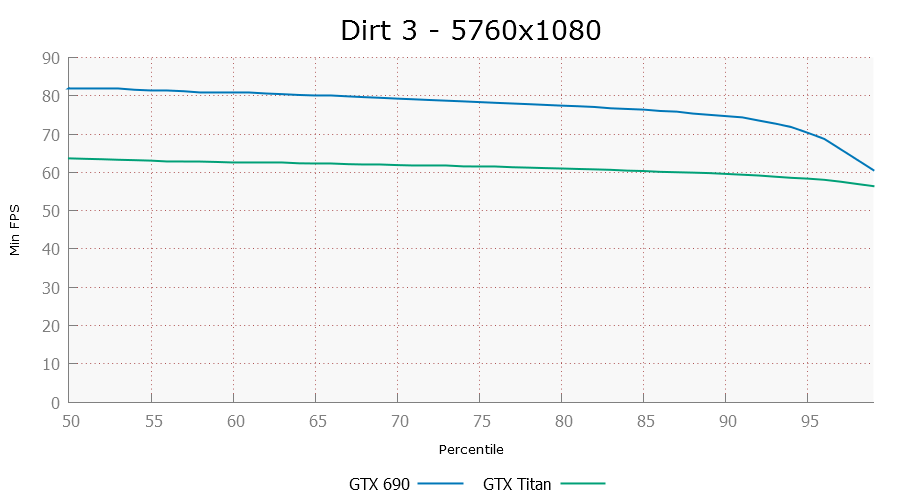 The minimum FPS graph shows this another way – the straighter and flatter the line here, the more consistent the experience.  The GTX 690 does trail off a bit at the end but the results aren't overly dramatic. 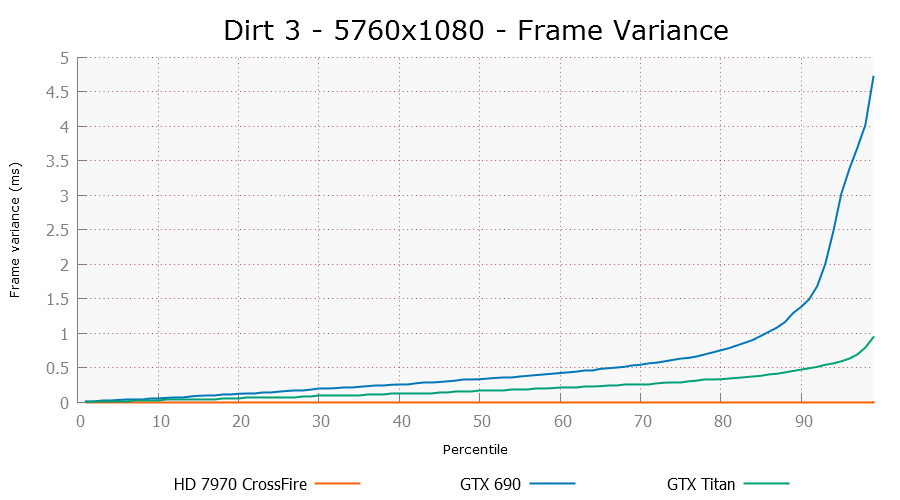 Finally, our frame variance chart shows it again – the GTX Titan never sees more than a 1ms difference between the current frame time and the running average of the last 20 frame times while the GTX 690s has spikes nearing 5ms.