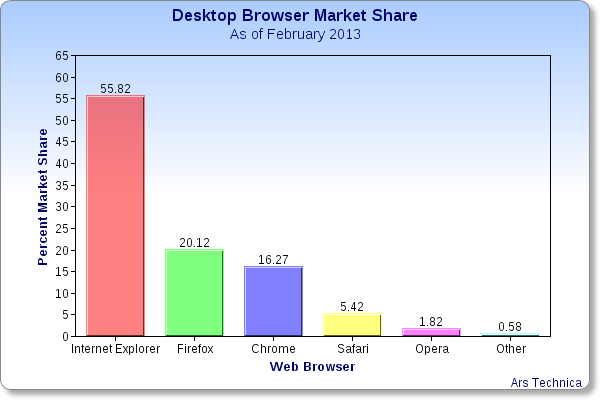 Net Market Share has released statistics on the state of browser market share as of last month (February 2013). The numbers indicate that Internet Explorer is still the dominant browser on the desktop, with Firefox and Chrome coming in second and third place respecitvely. Interesting, the situation is reversed on the mobile front, with Internet Explorer being greatly surpased by Apple’s Safari in the top spot.

On the desktop browser front, Internet Explorer experienced year over year growth to 55.52% in February 2013. Firefox market share remained fairly stable YoY, ending up with 20.12%. Further, Chrome saw a slight YoY decline to 16.27%. Additionally, Safari and Opera sustained 5.42% and 1.82% market share in February 2013. Both browsers’ slice of the market remained fairly stable throughout the year. It will be interesting to see if Opera’s switch to WebKit will net the browser additional market share (RIP Presto).

Ars Technica further compiled charts on the specific browser versions used. While the majority of IE users are running version 8 and 9 (with IE 6 sadly being the thrid most popular version), Chrome and Firefox users are spread out fairly evenly between the different versions. That may have more to do with Chrome and Firefox’s accelerated versioning/updating though.

For mobile, Apple’s Safari browser leads the pack with 55.41% as of February 2013, which is surprisingly a YoY decline. Meanwhile, the stock Android web browser gained ground throughout the year, ending up with a market share of 22.85%. Opera Mini came in third place with 12.72% market share. Other interesting numbers include Chrome with 1.96%, Internet Explorer (mobile) with 1.58%, and BlackBerry with 0.96%. Further, Symbian has 1.37% market share, which puts it above BlackBerry and just under Internet Explorer. Not bad for a dying mobile OS! 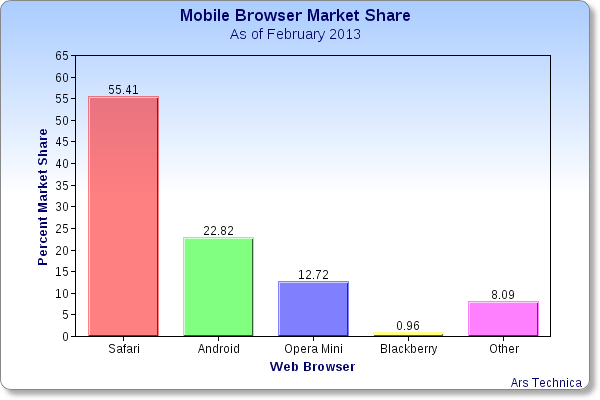 I was fairly surprised by the Internet Explorer numbers, but when taking into account work machines and Windows’ dominance (and users that generally use the default browser–power users excluded of course) I suppose it makes sense. I do wish that the IE6 numbers would fall a bit more though, even it if it just users moving to a newer version of IE.

You can find the full Net Market Share report here. What browser(s) do you use on a daily basis?

Here are those same numbers represented as pie charts: 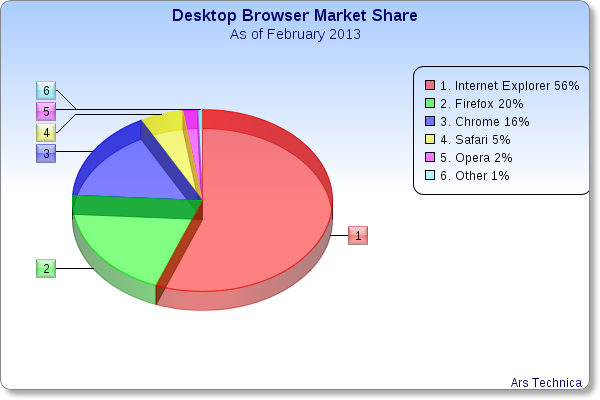 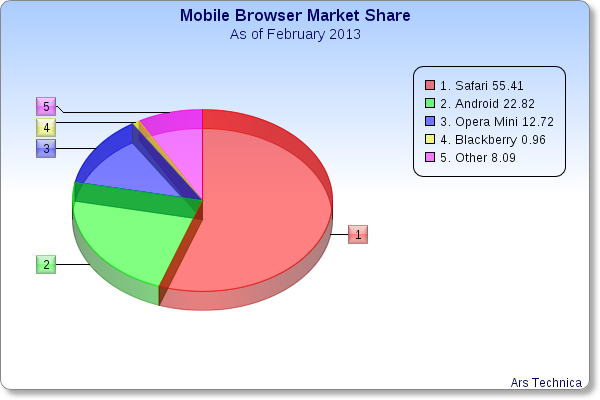 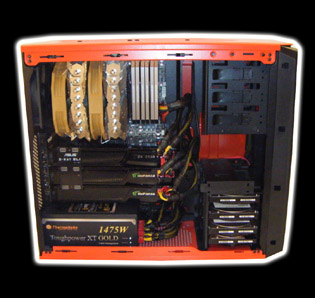 The Corsair case you could have won

We now return you to your regularly scheduled news program