The MSI Suite is a bundling mechanism for all the included MSI utilities, providing a centralized repository from which you can access and run the applets. The applications can also be run by themselves. The Super Charger applet allows the user to fast-charge USB devices from the board's USB ports. Click BIOS II and the Control Center applets are used for Windows-based board monitoring and overclocking. The Audio, Network and Teaming Genie applets are for controlling aspects of their targeted components (the audio and the networking subsystems respectively). The Video Genie can visually enhance pictures and the Easy Viewer can be used to view media files. Live Update 5 give the user a Windows-based interface for BIOS backup and update.

The Click BIOS II applet provides the user with an exact replica of the Z77A-G45 Thunderbolt's BIOS screens from within windows with all settings available from the following screens: Settings, OC, ECO, and SECURITY. The Settings screen is further sub-divided into the Advanced tab, the M-Flash tab, and the Boot tab. Note that you can access the Control Center applet from an icon in the upper right corner of the Click BIOS II title bar.

The Control Center applet provides similar utility to the user as the Click BIOS II applet in a more user friendly interface. The applet is divided into several tabs as follows: Overclocking, OC Genie, Green Power, LED, Record, and Mobile Control. The Overclocking tab houses options for manually configuring board bus speeds and voltages. The OC Genie tab gives the user Windows-based control over the OC Genie overclocking BIOS by simply clicking the OC Genie button on the page. The Record tab gives the user options for monitoring and recording history on various BIOS monitored voltages, fan speeds, and temperatures. Note that you can access the Click BIOS II applet from an icon in the upper right corner of the Control Center title bar. 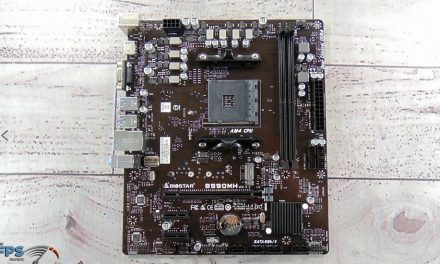