When we first heard about “Richland” last year, there was a little bit of excitement from people.  Not many were sure what to expect other than a faster “Trinity” based CPU with a couple extra goodies.  Today we finally get to see what Richland is.  While interesting, it is not necessarily exciting.  While an improvement, it will not take AMD over the top in the mobile market.  What it actually brings to the table is better competition and a software suite that could help to convince buyers to choose AMD instead of a competing Intel part.

From a design standpoint, it is nearly identical to the previous Trinity.  That being said, a modern processor is not exactly simple.  A lot of software optimizations can be applied to these products to increase performance and efficiency.  It seems that AMD has done exactly that.  We had heard rumors that the graphics portion was in fact changed, but it looks like it has stayed the same.  Process improvements have been made, but that is about the extent of actual hardware changes to the design. 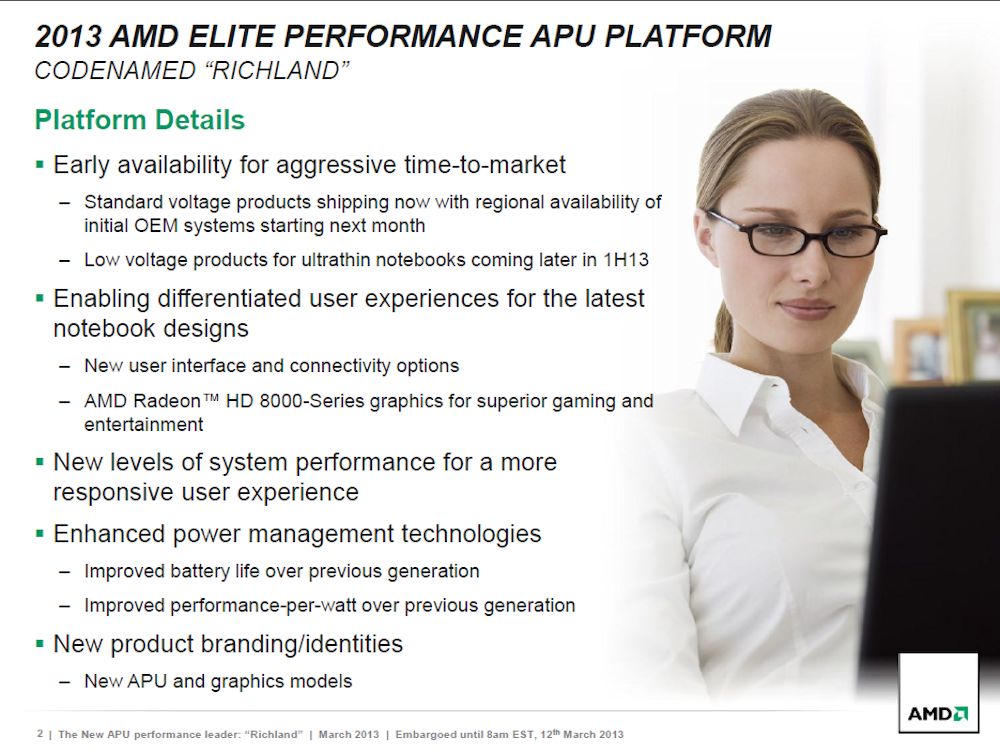 The new Richland APUs are branded the A-5000 series of products.  The top end is the A10-5750M with HD-8650 integrated graphics.  This is still the VLIW-4 based graphics unit seen in the previous Trinity products, but enough changes have been made with software that I can enable Dual Graphics with the new Solar System based GPUs (GCN).  The speeds of these products have received a nice boost.  As compared to the previous top end A10-4600, the 5750 takes the base speed from 2.3 GHz to 2.5 GHz.  Boost goes from 3.2 GHz up to 3.5 GHz.  The graphics portion takes the base clock from 496 MHz up to 533 MHz, while turbo mode improves over the 4600 from 685 MHz to 720 MHz.  These are not staggering figures, but it all still fits within the 35 watt TDP of the previous product. 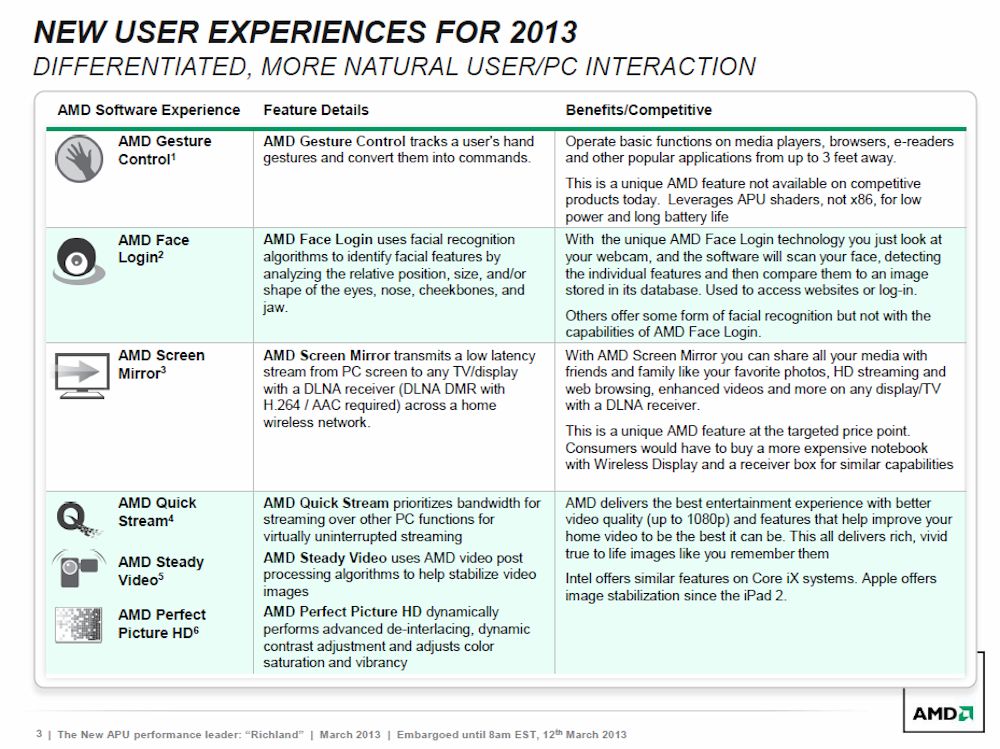 One other important improvement is the ability to utilize DDR-3 1866 memory.  Throughout the past year we have seen memory densities increase fairly dramatically without impacting power consumption.  This goes for speed as well.  While we would expect to see lower power DIMMs be used in the thin and light categories, expect to see faster DDR-3 1866 in the larger notebooks that will soon be heading our way. 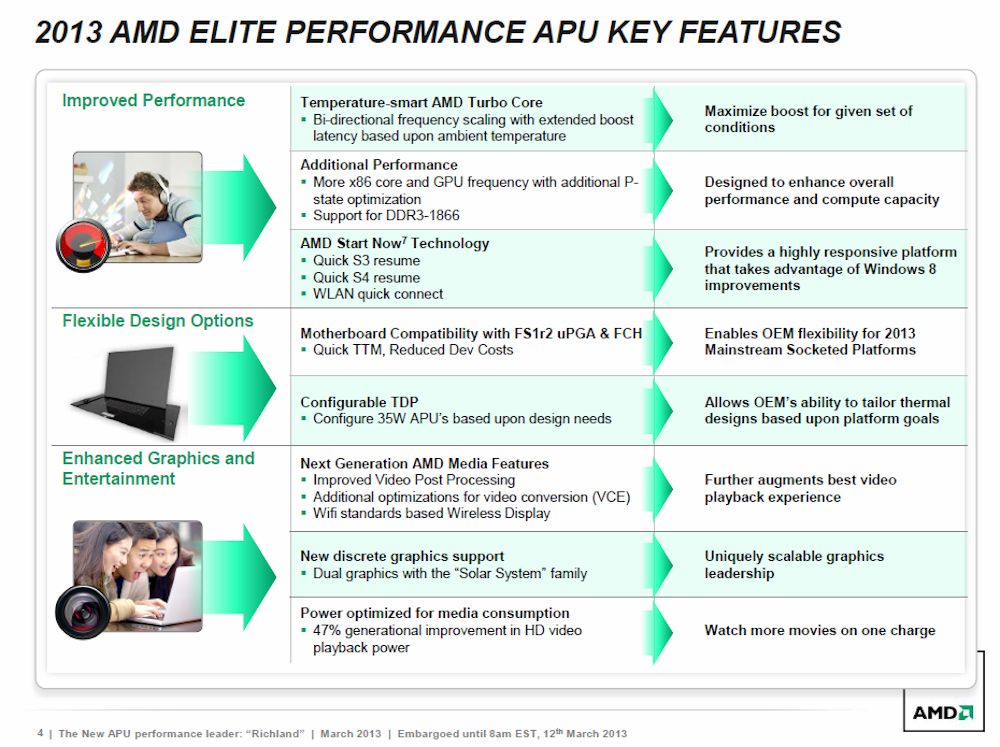 As mentioned before, the majority of the gains we see today are the work of low level software optimizations.  The original Trinity had a fairly complex scheme to keep clockspeeds high, balance out power needs, and to keep it all under 35 watts TDP when it comes to heat production.  The die has quite a few temperature sensors throughout the design, and these provide feedback as to what unit is heating up and what is idle.  The software that controls all this then determines what area needs to be clocked down, what can be clocked up, and how to maximize performance determined by workloads. 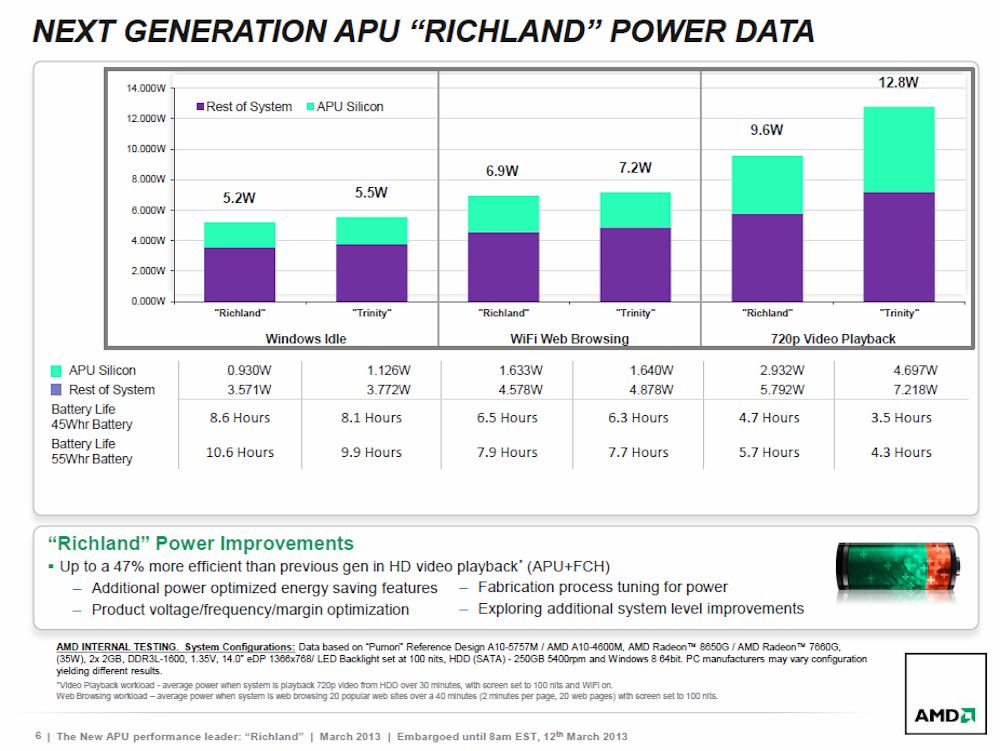 AMD has several improvements under differing operations that allows them to increase overall clockspeeds, enable turbo modes to last longer, and balance out CPU and GPU workloads more effectively.  They have increased the number of P states (clock vs. voltage) so it is more finely grained.  This should allow the processor to more adequately respond to performance needs, instead of making a larger jump to the next P state, it takes a smaller one from the previous state.  This again is aimed at maximizing power and clockspeed given a certain workload.  The algorithms dictating if the CPU or GPU gets more power and speed have been overhauled as well.  AMD claims that these new algorithms can more adequately adjust for corner cases where both units may be bottlenecked, but can correctly decipher which unit actually will show the greatest performance increase by loosening the performance bottleneck.

Finally we get to the operating system level software enhancements that AMD is introducing.  These are somewhat interesting, depending on the usage expected from these parts.  These are new programs that promise to allow more functionality and flexibility than previous notebook parts have provided.  The first is AMD Gesture Control.  This does exactly what one would think it would.  With a webcam enabled notebook the user can set it up to make gestures correspond to commands.  Things such as a hand wave can turn a page on an e-book.  The downside to this is if a person is jamming out to “Stop, In the Name of Love” and keeps interrupting the playback with their motions.  There is no colorful metaphor app as of yet from AMD. 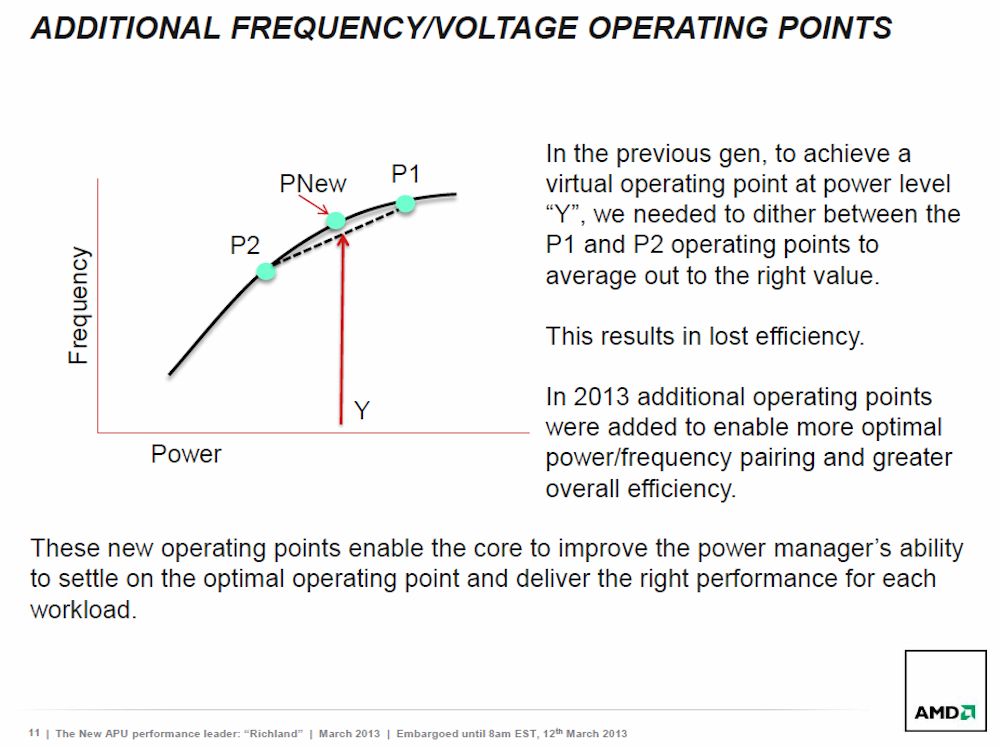 Other enhancements in software bundle includes AMD Face Login, AMD Screen Mirror (sharing media at low latencies to a variety of playback options), AMD Quick Stream (media streaming that takes priority over networks so no hiccups will occur), AMD Steady Video (already available through Catalyst), and AMD Perfect Picture HD (de-interlacing, contrast enhancement, color saturation, and vibrancy).  At first glance these appear to be a bit underwhelming, but consider that they all will be bundled with the new Richland APUs.  Intel currently has no software bundle to compare it to. 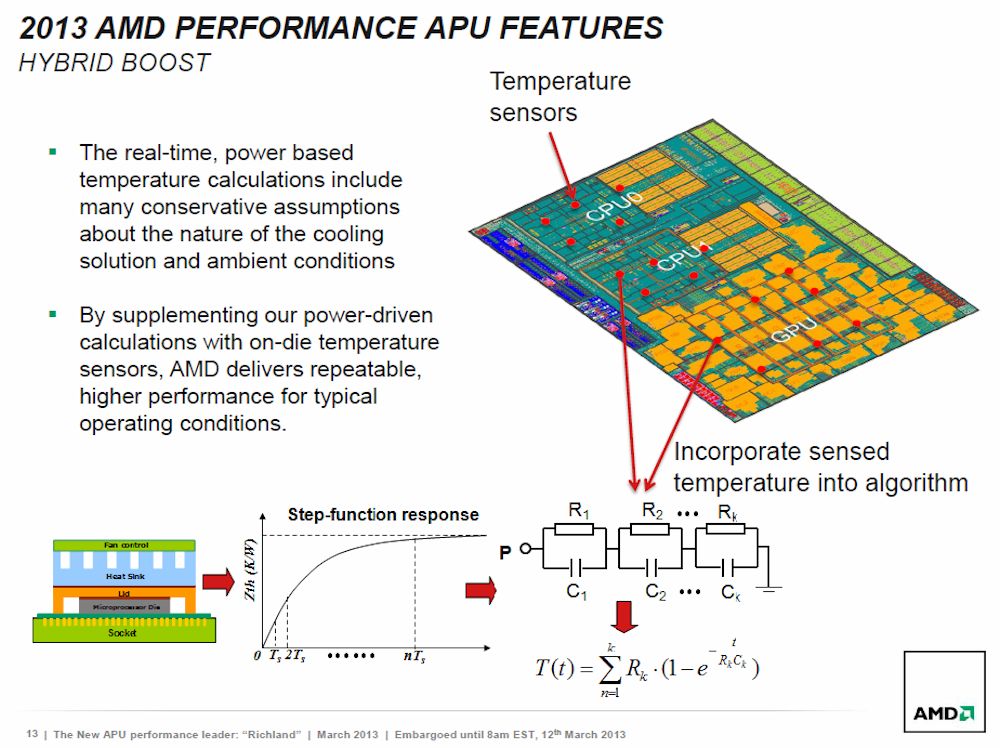 Richland is not the second coming.  It still looks like a very interesting product.  AMD certainly is willing to shake things up a bit, and this refresh is coming hard and fast.  AMD expects mobile Richland processors to be available in end user products by next month.  Low voltage version for ultra-thins should be available before the end of 1H 2013.  AMD has no real choice but to release improved products on an aggressive schedule.  Make no mistake, Richland is an improvement over Trinity.  Now users just have to judge what is more important to them when it comes to usage and features.  AMD certainly has the edge in graphics and software, but Intel still has overall CPU performance and power consumption.

The Rev G, more than just a shrinking core