The card we have been expecting

The long awaited reference AMD Radeon HD 7990 is finally here and we put it through the Frame Rating process.

Despite all the issues that were brought up with our new graphics performance testing methodology we are calling Frame Rating, there is little debate in the industry that AMD is making noise once again in the graphics field.  From the elaborate marketing and game bundles with all Radeon HD 7000 series cards over the last year to the hiring of Roy Taylor, VP of sales but also the company's most vocal supporter.

Along with the marketing though goes plenty of technology and important design wins.  With the dominance of the APU on the console side (Wii U, Playstation 4 and the next Xbox), AMD is making sure that the familiarity with its GPU architecture there pays dividends on the PC side as well.  Developers will be focusing on AMD's graphics hardware for 5-10 years with the console generation and that could result in improved performance and feature support for Radeon graphics for PC gamers.

Both ASUS and PowerColor currently have high-end dual-Tahiti cards for sale.  The PowerColor HD 7990 Devil 13 used the brand directly but ASUS' ARES II kept away from the name and focused on its own high-end card brands instead.

The "real" Radeon HD 7990 card was first teased at GDC in March and takes a much less dramatic approach to its design without being less impressive technically.  The card includes a pair of Tahiti, HD 7970-class GPUs on a single PCB with 6GB of total memory.  The raw specifications are listed here: 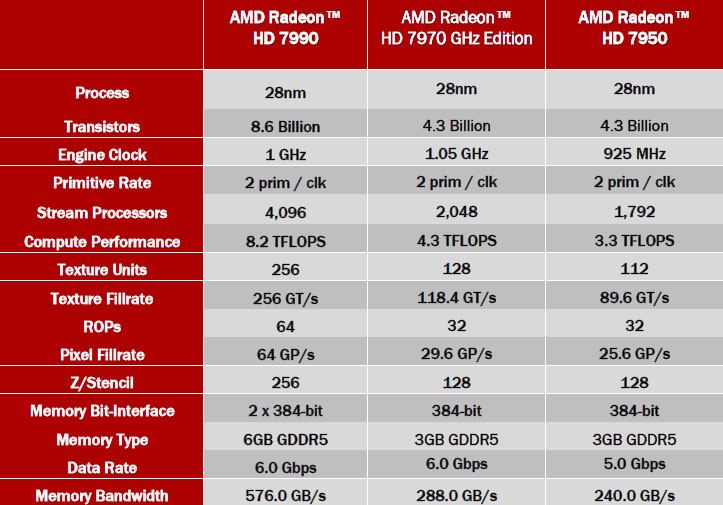 Considering there are two HD 7970 GPUs on the HD 7990, the doubling of the major specs shouldn't be surprising though it is a little deceiving.  There are 8.6 billion transistors yes, but there are still 4.3 billion on each GPU.  Yes there are 4096 stream processors but only 2048 on each GPU requiring software GPU scaling to increase performance.  The same goes with texture fill rate, compute performance, memory bandwidth, etc.  The same could be said for all dual-GPU graphics cards though. 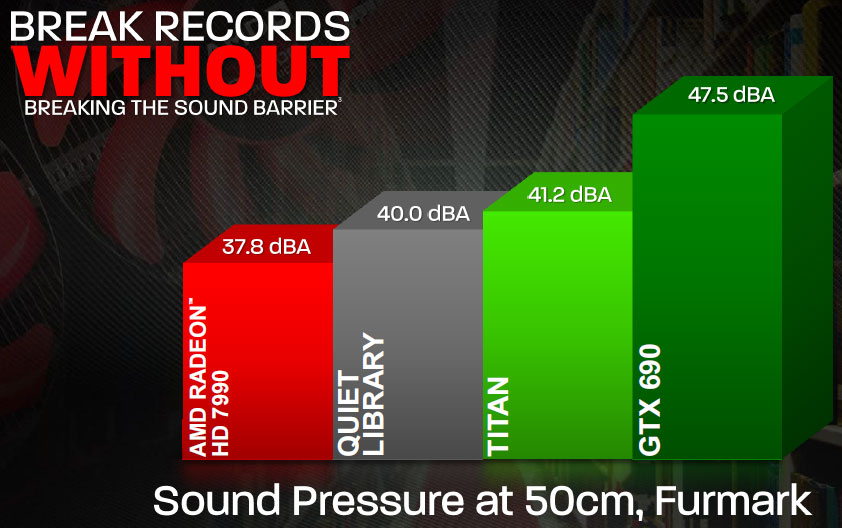 Maybe more interesting is that AMD is claiming the HD 7990 improves on the noise levels of the Radeon line, coming in below the GeForce GTX TITAN, a card released earlier in the year that we were incredibly impressed with.  The problem is these results do not match our own testing – the Radeon HD 7990 proved to be louder than the TITAN and GTX 690 in our own results.  More on that later though. 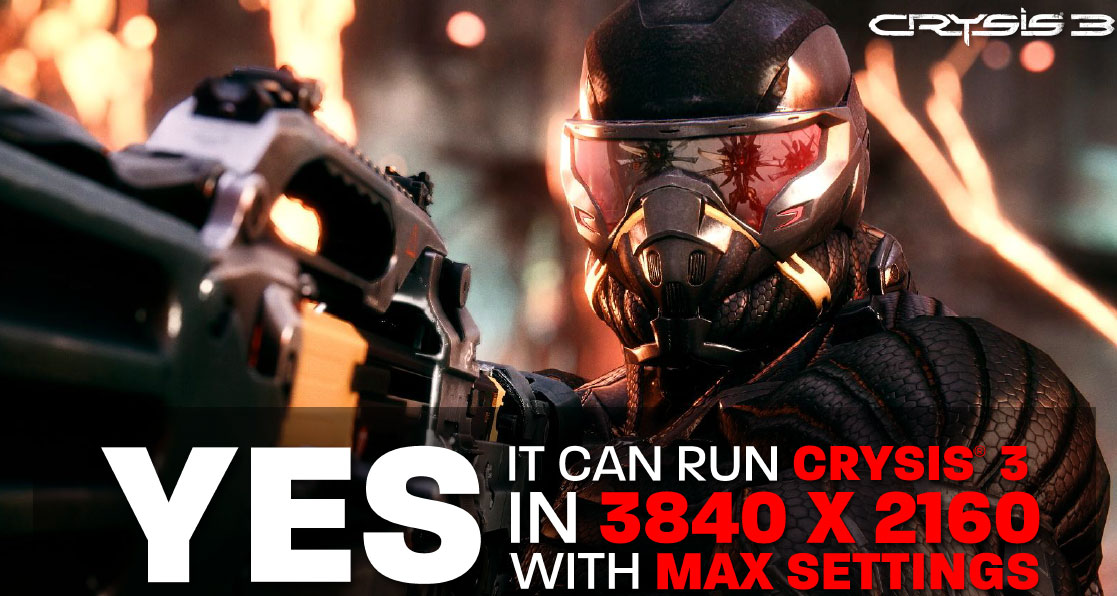 This should get PC gamers excited, especially considering I just recently was able to purchase a 50-in 4K television for $1299!

The Radeon HD 7990 will also be a part of the currently running Never Settle Reloaded bundle, but with the biggest collection of games we have ever seen!  You get eight full PC titles when you buy one of these cards – Bioshock Infinite, Far Cry 3, Far Cry 3 Blood Dragon, Crysis 3, Tomb Raider, Hitman: Absolution, Sleeping Dogs and Deus Ex: Human Revolution.  That is a hell of a great collection of titles and even if you own a couple of them already, this bundle is worth a few hundred dollars at least.  It puts the copy of Metro: Last Light that you get with the GeForce GTX 690 / TITAN to shame…

Continuing with the black and red color scheme, the HD 7990 is a good looking card though I do think it lacks the polish and class that both the GeForce GTX 690 and GTX TITAN exude.  The HD 7990 uses a very large heatsink that runs basically the entire length of the board with three fans that apply direct air over the fins, rather that using a system that attempts to move the air from one side of the card to the rear exhaust.  This is one of the reasons AMD was able to lower the noise levels of the card, well below what the HD 7970 reference design offered.

The display connections on the HD 7990 permit for five simultaneous displays, four mini DisplayPort and one dual-link DVI.  If you want to connect six monitors to it though you are going to have to hunt down one of those mythical MST DisplayPort hubs…good luck with that.   Five outputs though allows for an Eyefinity display and two more auxiliaries that should be enough for just about everyone. 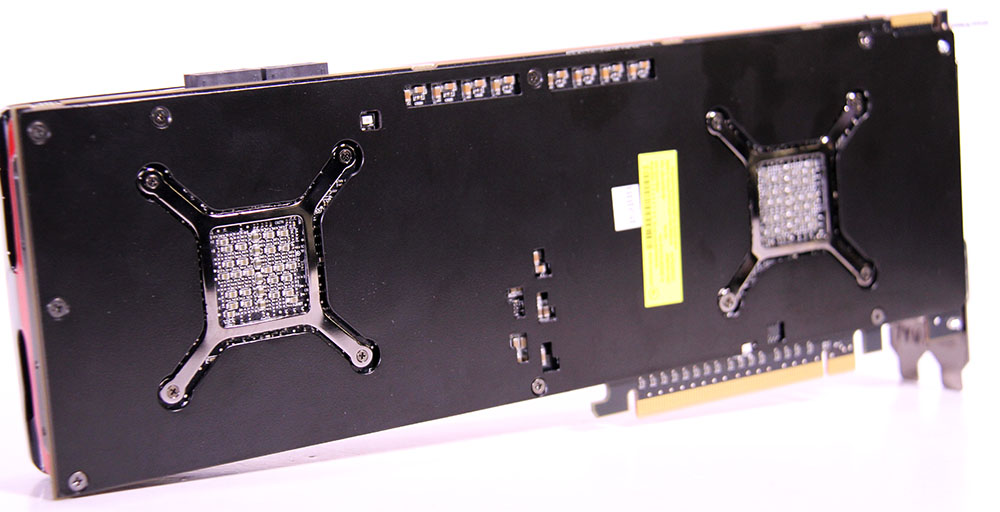 Looking at the back of the card we see a plate that protects the rear PCB (a good thing) and the two GPUS spaced out on the PCB. 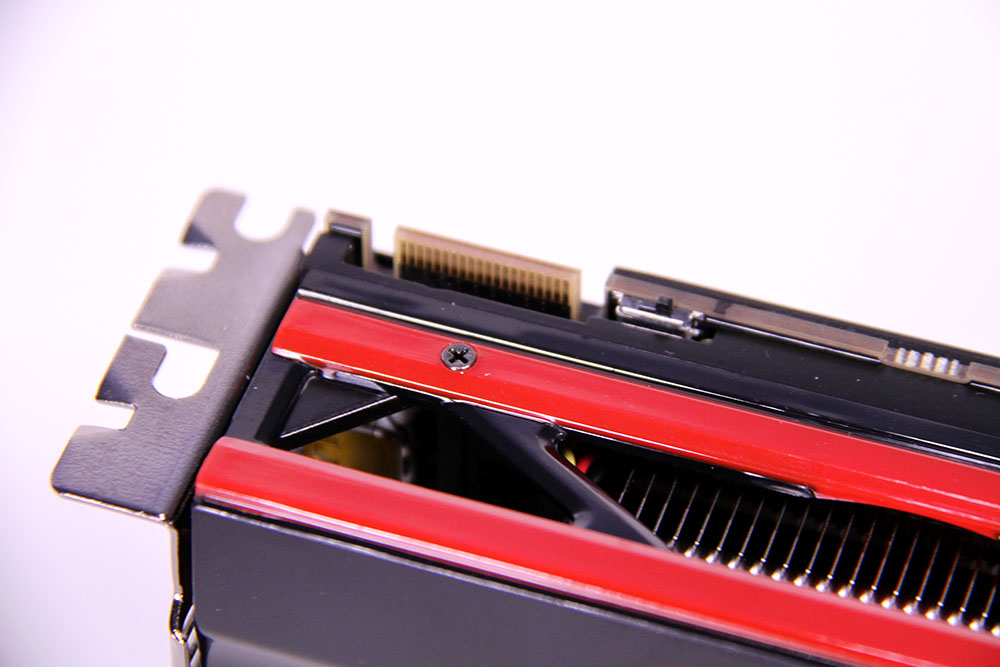 The HD 7990 does support CrossFire configurations so you can added another HD 7990 and in theory a single GPU HD 7970 card for triple CrossFire X scaling. 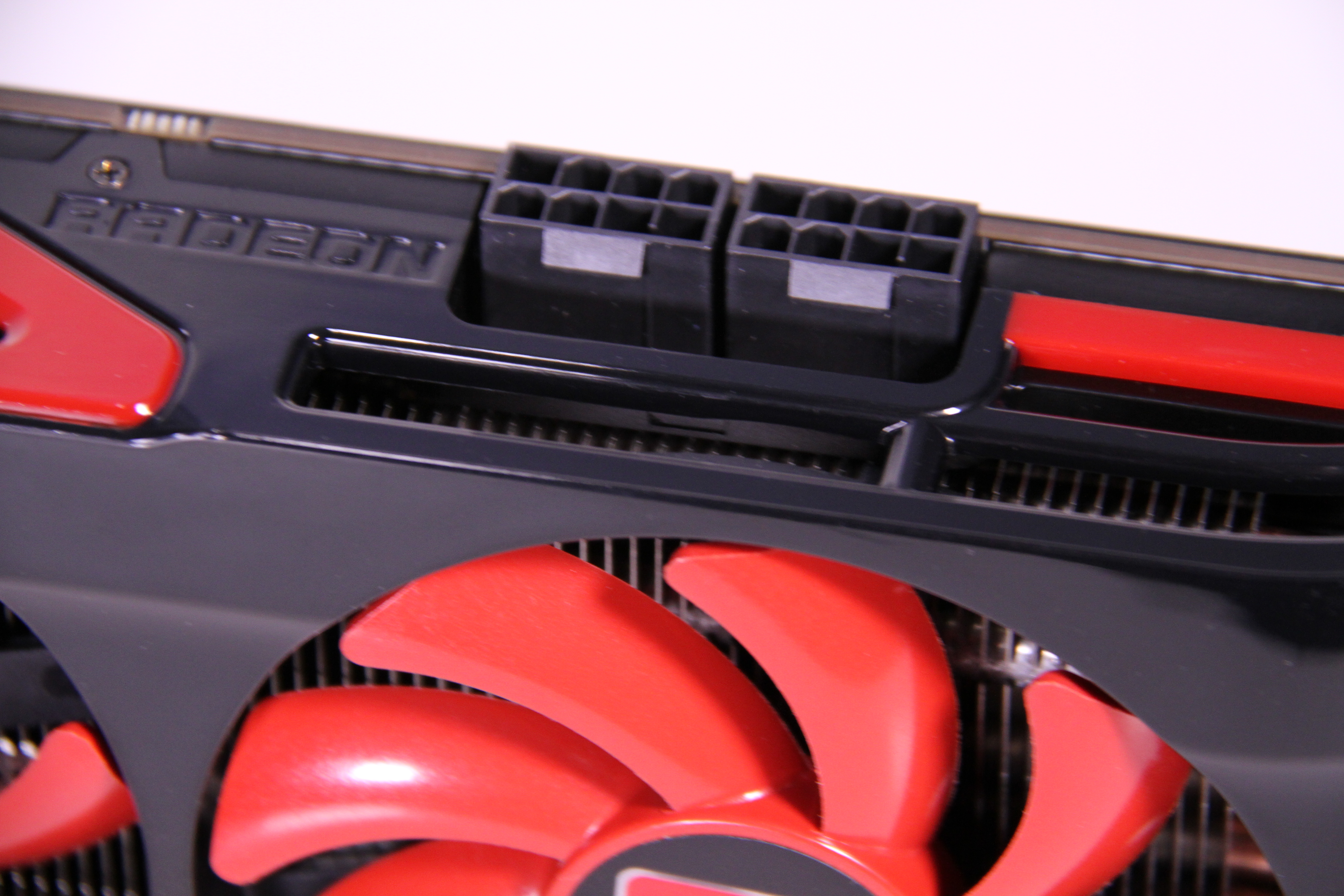 Two 8-pin ATX power connectors fuel the HD 7990 but are also set out just a bit from being flush with the card design.  While that definitely keeps the card from looking as sleek as it could, it does make for a much easier installation and removal of the PCIe connectors.  Function over form in this case. 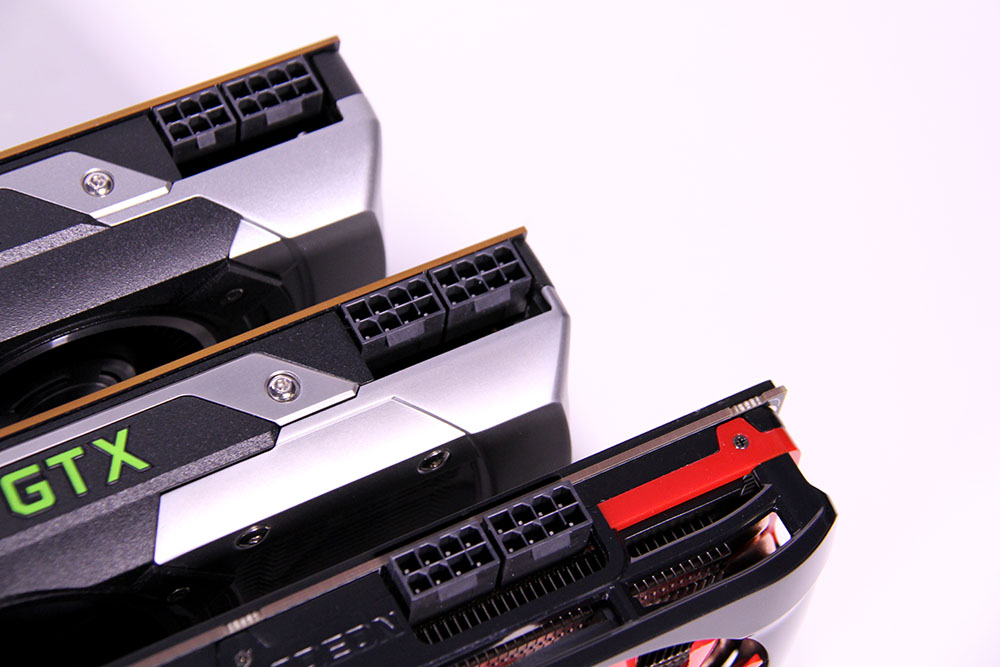 If you are interested in board length, the HD 7990 is definitely the longest of the competitors here today.  In the photo above you can compare it to the GTX 690 (middle) and the GTX TITAN (top).

Finally, for those Peeping-Toms out there, here is the HD 7990 stripped of all its covering, revealing the pair of Tahiti GPUs and the PCI Express 3.0 PLX bridge chip.  That chip allows for as much as 96 GB/s of inter-GPU bandwidth so there won't be any issues with communication speeds and in fact it COULD improve things compared to pair of HD 7970s in some cases.