Though secondary for most people that are buying a $1000 gaming graphics card, a quick look at the power consumption and sound levels of the new HD 7990 reveals some interesting data 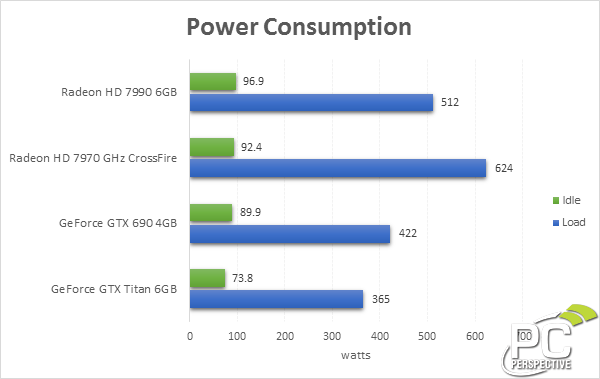 The release of Kepler showed us that NVIDIA could take high performance and low power seriously, while AMD struggles a bit to keep up with that mentality in this case.  The HD 7990 used 512 watts (total system), which was a good drop from the 624 watts of the HD 7970 cards running in CrossFire.  But, compare that to the GTX options: the GTX 690 used 90 watts less and the GTX Titan used 147 watts less! 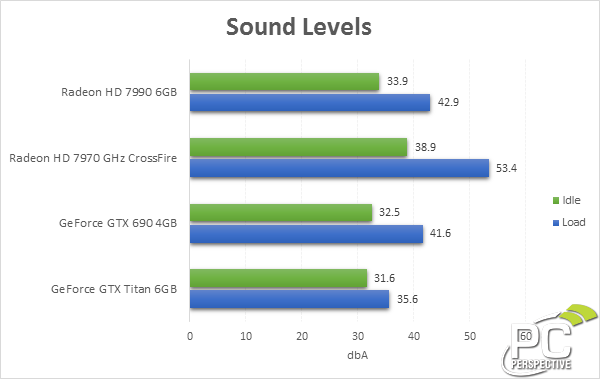 During the press presentation about the HD 7990 AMD was very proud of the fact that they had lowered the noise levels of the HD 7990 so much compared to other HD 7000-series cards that it would it was coming in under even the over-engineered GTX Titan.  Our tests didn't show that at all.  The HD 7990 in my sound level testing came in right about the same level as the GTX 690 but was still 6 dBA higher than our GTX Titan results.

Sound level testing in an open environment can be tricky, but we are careful to keep consistent ambient sound levels so I don't think our results are off enough to account for this kind of discrepancy.

I took a pretty short route to overclocking the Radeon HD 7990 – using only the Catalyst Control Center I pushed the clock from 1000 MHz to 1100 MHz, and the memory clock from 1500 MHz to 1575 MHz.  That's not much, and considering the clock speed of the HD 7990 wasn't hitting 1000 MHz consistently, I didn't expect a big improvement in performance.

Our 3DMark Fire Strike Extreme result only increased about 1% so we are obviously going to need to get into voltage adjustment to really push this card forward.