ASUS has finalized the design for its Kepler-based DirectCU Mini graphics card. The new card combines NVIDIA's GTX 670 GPU and reference PCB with ASUS' own power management technology and a new, much smaller, air cooler. The new ASUS cooler has allowed the company to offer a card that is a mere 17cm long. Compared to traditional GTX 670 graphics cards with coolers at approximately 24cm, the DirectCU Mini is noticeably smaller.

The DirectCU Mini features a GTX 670 GPU clocked at 928MHz base and 1,006MHz boost. It also has 2GB of GDDR5 memory on a 256-bit bus. The card requires a single 8-pin PCI-E power connector. Video outputs include two DVI, one DisplayPort, and a single HDMI port. The ASUS cooler includes a copper vapor chamber and a single CoolTech fan. According to ASUS, the DirectCU Mini is up to 20% cooler and slightly quieter than previous GTX 670 cards despite the smaller form factor.

This new card will be a great addition to Mini-ITX-based systems where saving space anyway possible is key. It is nice to know that gamers will soon have the option of powering a small form factor LAN box with a GPU as fast as the GTX 670. Even better, water cooling enthusiasts will be happy to know that the card still uses a reference PCB, meaning it is compatible with existing water blocks made for the current crop of GTX 670 cards. 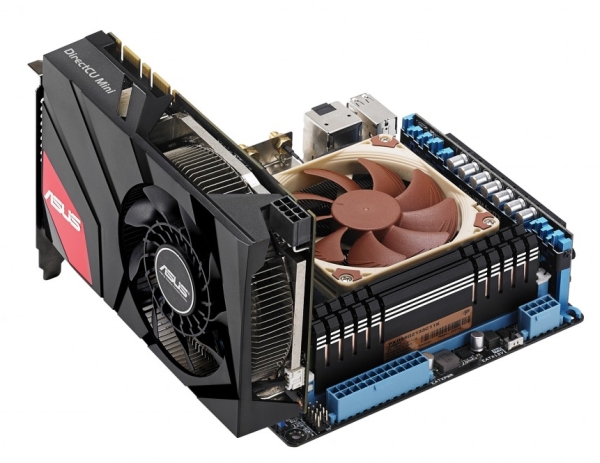 Pricing and availability have not been announced, but the small form factor-friendly GPU is now official and should be coming sometime soon.

Read more about the GTX 670 and Mini-ITX at PC Perspective.