AMD has a lot to say today.  At an event up in Toronto this month we got to sit down with AMD’s marketing leadership and key engineers to learn about the company’s plans for 2013 mobility processors.  This includes a refreshed high performance APU known as Richland that will replace Trinity as well as two brand new APUs based on Jaguar CPU cores and the GCN architecture for low power platforms.

Josh has put together an article that details the Jaguar + GCN design of Temash and Kabini and I have also posted some initial performance results of the Kabini reference system AMD handed me in May.  This article will detail the plans that AMD has for each of these three mobile segments, starting with the newest entry, AMD’s Elite Mobility APU platform – Temash.

The goal of the APU, the combination of traditional x86 processing cores and a discrete style graphics system, was to offer unparalleled performance in smaller and more efficient form factors.  AMD believes that their leadership in the graphics front will offer them a good sized advantage in areas including performance tablets, hybrids and small screen clamshells that may or not be touch enabled.  They are acknowledging though that getting into the smallest tablets (like the Nexus 7) is not on the table quite yet and that content creation desktop replacements are probably outside the scope of Richland.

AMD will have the first x86 quad-core SoC design with Temash and AMD thinks it will make a big splash in a relatively new market known as the “high performance” tablet.

Temash, built around Jaguar CPU cores and the graphics technology of GCN, will be able to offer fully accelerated video playback with transcode support as well with features like image stabilization and Perfect Picture enabled.  Temash will also be the only SoC to offer support for DX11 graphics and even though some games might not have the ability to show off added effects there are quite a few performance advantages of DX11 over DX10/9.  With more than 100% claimed GPU performance upgrade you’ll be able to drive displays at 2560×1600 for productivity use and even be able to take advantage of wireless display options.

AMD is also pushing features like Face Login and Gesture Control that I must be honest about – I have little to no interest in these types of interactions with my PC or tablet.  However, support for OpenCL and DirectCompute with DX11 could be a great feature for low power devices like this as more applications (like MS Office) start to lean on the power of the GPU for efficiency.

Not only will Temash find its way to tablets but also into the world of very low cost notebooks.  AMD sees small screen touch-enabled devices that don’t compromise much on the performance of larger, more expensive devices.  While there will be a range of products you could see Temash in machines using 1080p displays, ultrathin devices similar in scope to Ultrabooks and extended battery life configurations.

As I mentioned above, both Temash and Kabini will utilize a completely new APU architecture that features the Jaguar x86 cores and GCN (Graphics Core Next) technology found in the most recent discrete GPUs on the market.  Again, if you want the full break down on what is new with the Jaguar cores or the GCN design in this implementation, stop over at Josh’s architecture review for more data.

By moving in the chipset (FCH – Fusion Controller Hub) onto the die with the CPU and GPU, AMD has built the first SoC for the x86 world that is quad-core ready.  Not all Temash products will be quad-core but Kabini A6 and A4 units will be.  The Jaguar CPU core offers as much as 20% improvement over the previous generation Bobcat cores found in the Brazos platform while the graphics system will be as much as 75% faster in theoretical compute rates.

The memory controller is a single channel 64-bit controller that runs DDR3 memory at 1066 MHz (higher on Kabini) while supporting lower voltages like 1.25v to help with battery life.  You’ll be able to drive two simultaneous displays with Temash including a 4-lane DisplayPort configuration up to 2560×1600.  The IO support includes USB 3.0, SATA 3.0 Gb/s ports, SDIO and more. 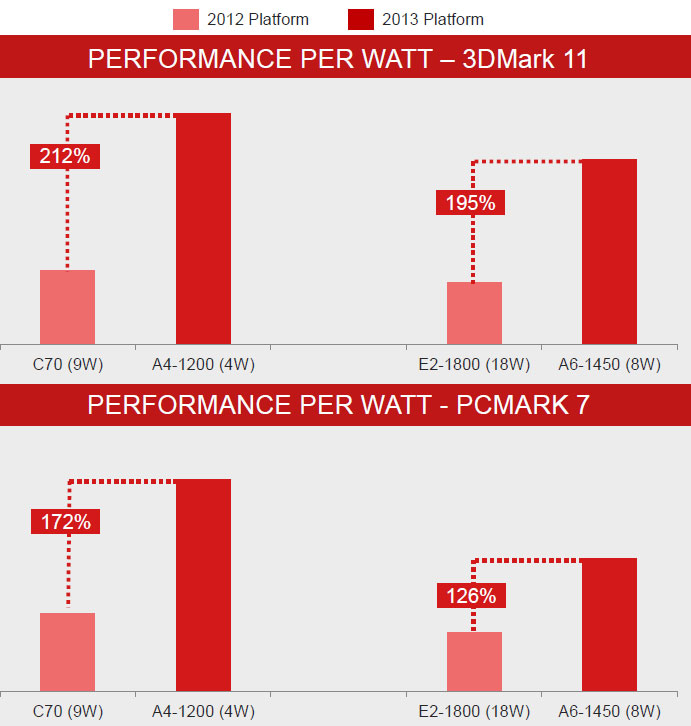 Based on AMD’s metrics, Temash is going to quite a bit more power efficient than Brazos 2.0 was.  In 3Dmark11, the 2013 platform shows as much as a 212% increase in performance per watt (the most important metric for these kinds of form factors).  AMD is so proud of these results that they claim this APU will “reset user expectations for what they can do in a tablet.”

Comparing Temash to the current Clovertrail based Atom Z2760 systems (again these are AMD results) we see some impressive results.  The A6-1450 is the quad-core Temash product while the A4-1250 is the dual-core option and there are noticeable differences on the gaming front, though there are no CPU-based tests for us to evaluate.

The battery life tests are telling too – getting 7.6 hours of browsing time on a 33 WHr battery compared to the 5.3 hours with Clovertrail is a huge increase.  Of course we need to test these platforms ourselves to be sure but if they hold, the results look great for AMD!

This is how AMD sees the targeted markets for the new Temash-based APUs.  I tend to agree that Temash has no direct competition on the tablet side of things as the Atom is a much lower end product but the Core i3-based systems will be priced quite a bit higher.  On the notebook side things are going to be a lot more competitive with low cost options from the likes of Dell muddying the waters.

Here is breakdown of upcoming Temash APUs.  The A6 is the only quad-core option but it will have a modest 8 watt TDP along with variable clock speed Jaguar and GPU cores.  Note that these are TDP levels, not SDP levels as Intel has been promoting with Clovertrail+ and Bay Trail so direct comparison are difficult without hardware in our hands.  All of the Temash parts will have 128 Radeon Cores or SIMD units, the equivalent of two Compute Units from the Radeon architectures on the discrete side, running at anywhere from 225 MHz to 400 MHz on the top end offering.

I am most interested in the 3.9 watt A4-1200 SKU as it will be the one that could compete with the likes of the Nexus 10 and other ARM-based tablets directly.  Can AMD actually come up with a competitor to the ARM tablet dominance before Intel can with Bay Trail?

We actually got some hands on time with a Temash-prototype tablet back at CES.