In many ways, Kabini and Temash are very much the same product.  Both are based on the Jaguar x86 cores and the 128 SIMD unit Radeon GCN graphics architecture.  In fact, both use the same die!

AMD claims that Kabini will focus on the low-cost, mainstream notebook market will bring quad-core processors to this market as a “first.”  That is true – Intel has really only pushed the dual-core Core i3 products down into the sub-$500 segments that we are going to see Kabini in.  The CPU clocks speeds and higher are on Kabini than on Temash as are the GPU clocks – but how much better and what that turns into for the consumer is something we discuss in our Kabini performance evaluation article.

Kabini is also the first platform that will see support for AMD’s new Screen Mirror technology that is hoping to compete against Intel’s WiDi for wireless display. 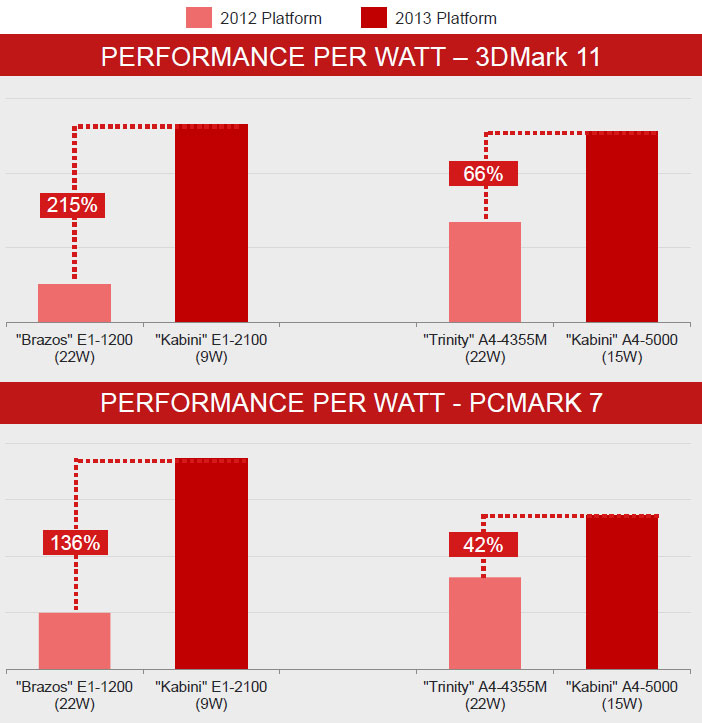 Again, looking only at performance per watt measurements compared to the Brazos platform, Kabini is seeing some great improvements in efficiency.  The 9 watt Kabini E1-2100 runs 215% more efficiently than the 22 watt Brazos while the 15 watt Kabini A4-1500 is 66% more power efficient than the 22 watt Trinity APU currently on the market. 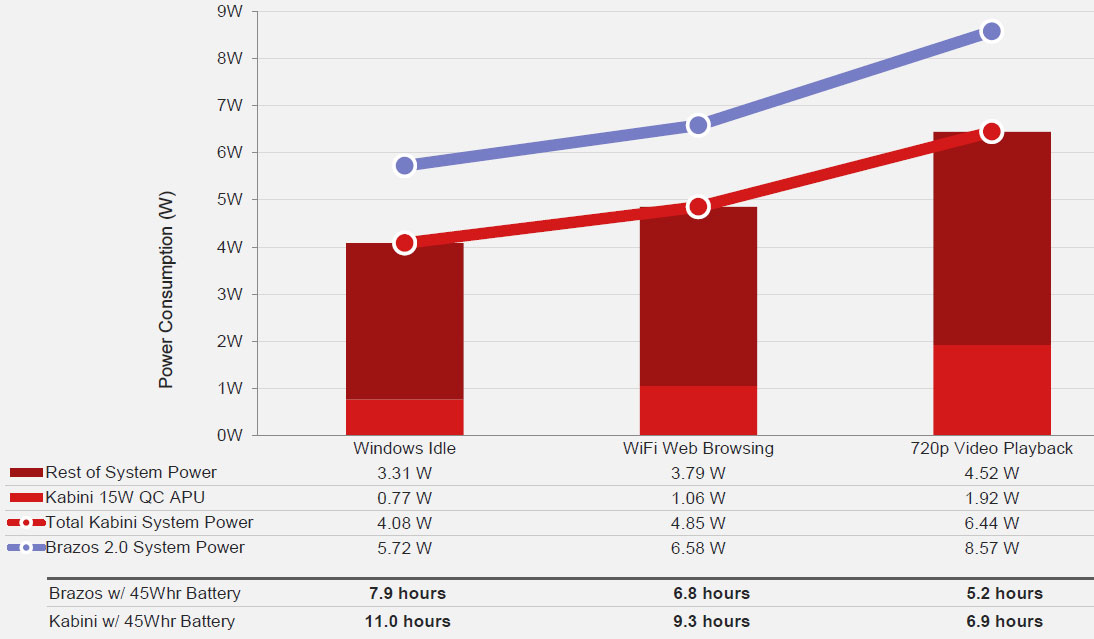 With a common battery size of 45 WHr, AMD claims that you can see as much as 1.7 hours more battery life with Kabini over the company’s previous Brazos platform while in video playback.  And 2.5 hours more with simple WiFi based web browsing!  Those are impressive advantages to see for a mainstream market that usually gets less than optimal power options.

Again, with AMD’s very limited collection of tests we can’t tell you anything definitive, but things look pretty good.  On the battery life test, AMD claims Kabini will do much better than even the 17 watt Ivy Bridge-based Core i5 platform, but then doesn’t use the Core i5 IVB system in any of the performance results.  If we take a look at the Cloud Gate 3DMark results we do see the 25 watt Kabini head to head against the Sandy Bridge Core i3 dual-core platform of 35 watts – and the two are basically identical in performance.  The A4-5000 15 watt part is about 25% slower than SNB in this case.