Our final new platform being launched today is Richland, the Elite Performance platform.  Richland is very much a revised version of Trinity but with some new platform options that AMD is throwing into the mix.  Much of the performance characteristics and comparisons to Intel’s platforms are going to seem very familiar.

The Richland family of APUs has a lot more segmentation than the more mainstream options with things like the game bundle (currently SimCity) with the A10.  Both the A10 and the A8 models will support and ship with gesture control, face login technology, screen mirror, steady video, etc.

While the Richland APU did change in very minor ways on the silicon side, most of the changes are coming at the platform level.  AMD was able to enable extended boost states with better monitoring of the APU temperatures and power levels, for example, which just allows the same parts to run at higher clocks for a longer period of time, increasing perceived performance.  Everything else is unchanged from Trinity, for the most part.

With power consumption, Richland expanded battery life in all areas by small amounts but only in the world of video playback is really worth writing home about.  There we see a 40% longer run time on a 55 WHr battery when running 720p video – AMD was able to change how the embedded video decode engine got power, allowing more of the APU to shut down during playback than before. 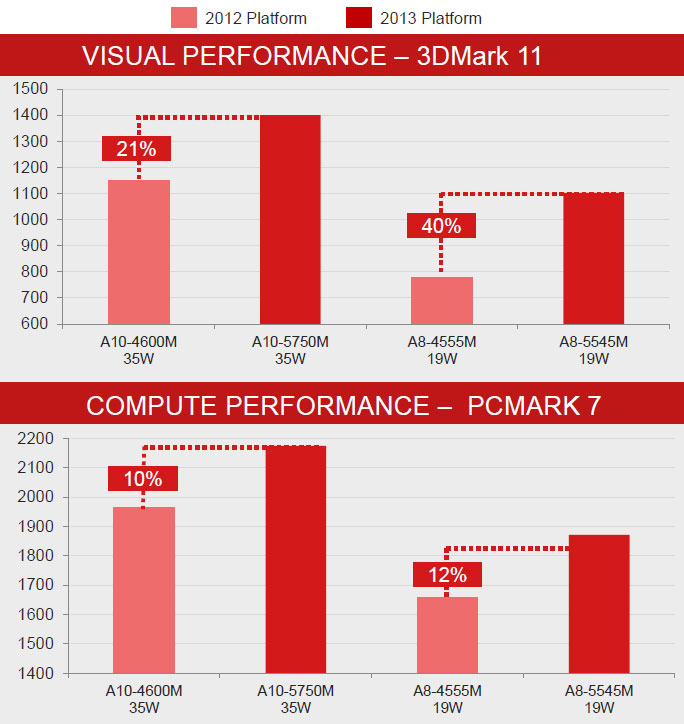 Comparing the Richland offerings (2013) to Trinity (2012), AMD does see efficiency gains but not nearly to the same levels that Temash and Kabini had.

Richland’s big advantage over the Intel competition is on the gaming front; anything that can take advantage of the GPU portion of the APU.  Here you can see how Batman: Arkham City and 3DMark Fire Strike compare between the new Richland APUs and Core i3/i5 processors from Intel.  Again, these are AMD-run tests so be sure to wait for our full review of the Richland platform coming up in early June!

How about some more games?  AMD would like to oblige.  Compared to the Core i5-3210M Ivy Bridge processor the A10-5750M is clearly the better gaming platform if you are deciding to not use any discrete graphics chips.  Note that in the past two slides, there were absolutely zero slides on raw CPU performance – clearly AMD hasn’t changed anything here and single-threaded applications are still going to run faster on IVB than on AMD’s Richland.

One feature I am hoping takes off for every platform in 2013 is ubiquitous wireless display technology and AMD claims that their offering for Windows Blue (8.1) will be much faster than Intel’s WiDi.  The metrics here claims 41 ms input lag versus 201 ms from WiDi – a huge difference if that turns out to be the case.  We do know however that Intel is working an updated version of WiDi as well that should address many concerns people have with it, including WiFi vendor support and latency.

The Richland APU line up will include options ranging from 35 watt TDPs all the way down to 17 watts, going head to head against the Intel Core i3 and Core i5 processors in the mobile segment.  The highest clocked option, the A10-5757M will run its quad-core x86 CPUs at a base clock of 2.5 GHz and a maximum boost speed of 3.5 GHz.  The GPU portion will include 384 SIMDs (6 Compute Units) at 600 MHz base and 720 MHz boost clocks.  While the 3.5 GHz CPU clock rate would be impressive for this APU at this wattage level, again we need a real-world configuration to see how long it actually RUNS at those speeds before we can really saw how well AMD can fare against Intel on the x86 performance front.

AMD has presented us with a busy summer; even though the discrete GPU side might be calm from them for a while that APU side is picking up steam as it rolls downhill.  Richland has a tough task ahead to really offer competition against the Ivy Bridge parts on the market today and the Haswell-based processors that will be out sooner that AMD would like.  Yes, I still expected Richland to have the advantage in the GPU/graphics performance but Intel is definitely going to have better options with the GT3 implementations on the Core i5 4000-series parts.  And Haswell’s x86 performance isn’t sitting still either and I would expect AMD to fall even further behind in that regard in the latter half of 2013.

Temash and Kabini are a totally different story though and I really think both of these platforms have a lot of potential for AMD going forward.  If AMD can get a couple of great design wins, and that is the key make no doubt about it, then the Jaguar + GCN designs could cut out a slice of the market that there is currently very little competition in.  Intel’s Silvermont designs and architecture will be the first real x86 competition but we don’t expect any of that to be shipping until late in 2013, maybe even early 2014.

I would highly encourage everyone to read over our two complementary articles launching today:

With those stories and this one, you should have a solid understanding of where AMD stands today on these various mobile APU markets.  Despite the continued laggard performance in the x86 space, I truly believe that AMD has responded well, and responded quickly, to the need for an ultra-mobile product with Temash and Kabini.

Hopefully we’ll have the design wins and results to prove it in short order.