AMD makes memory!  Ok, they likely contract out memory.  Then they brand it!  Then they throw in some software to make RAMDisks out of all that memory that you are not using.  Let us face it; AMD is not particularly doing anything new here with memory.  It is very much a commodity market that is completely saturated with quality parts from multiple manufacturers.

So why is AMD doing it?  Well, I guess part of it is simply brand recognition and potentially another source of income to help pad the bottom line.  They will not sell these parts for a loss, and they will have buyers with the diehard AMD fans.  Tim covered the previous release of AMD memory pretty well, and he looked at the performance results of the free RAMDisk software that AMD bundled with the DIMMs.  It does exactly what it is supposed to, but of course it takes portions of memory away.  When dealing with upwards of 16 GB of memory for a desktop computer, sacrificing half of that is really not that big a deal unless heavy duty image and video editing are required. 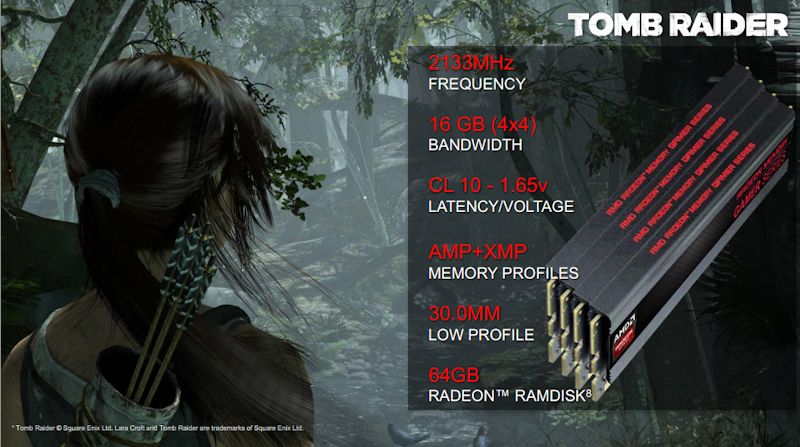 *Tombraider not included with Radeon Memory.  Radeon RAMDisk instead!

Today AMD is announcing a new memory product and a new bundled version of the RAMDisk software.  The top end SKU is now the AMD Radeon RG2133 DDR-3 modules.  It comes in a package of up to 4 x 4GB DIMMS and carries a CAS latency of 10 with the voltage at a reasonable 1.65v.  These modules are programmed with both the Intel based XMP and the AMD based AMP (MP stands for Memory Profiles… if that wasn’t entirely obvious).  The modules themselves are reasonable in terms of size (they will fit in any board, even with larger heatsinks on the CPU).  AMD claims that they are all high quality parts, which again is not entirely surprising since I do not know of anyone who advertises that their DIMMS feature only the most mediocre memory modules available. 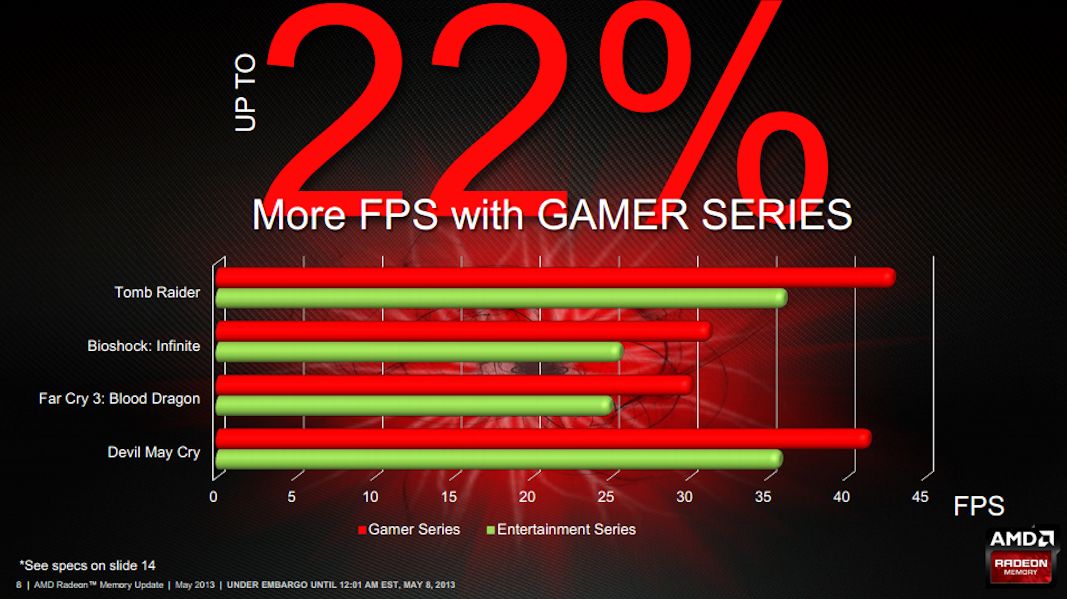 Faster memory is faster, water is wet, and Ken still needs a girlfriend.

AMD goes on to claim that faster memory does improve overall system performance.  Furthermore AMD has revealed that UV light is in fact a cancer causing agent, Cocoa Puffs will turn any milk brown, and passing gas in church will rarely be commented upon (unless it is truly rank or you start calling yourself “Legion”).  Many graphs were presented that essentially showed an overclocked APU with this memory will outperform a non-overclocked APU with DDR-3 1600 units.  Truly eye opening, to say the least. 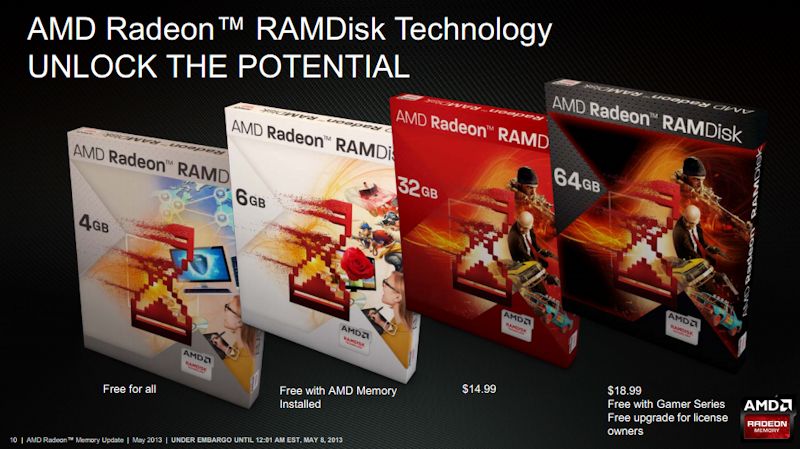 How much RAMDisk can any one man take?  AMD wants to know!

The one big piece of the pie that we have yet to talk about is the enhanced version of Radeon RAMDisk (is Farva naming these things?).  This particular version can carve out up to 64 GB of memory for a RAMDisk!  I can tell you this now, me and my 8 GB of installed memory will get a LOT of mileage out of this one!  I can only imagine the product meeting.  “Hey, I’ve got a great idea!  We can give them up to 64 GB of RAMDisk!”  While another person replies, “How do you propose getting people above 64 GB, much less 32 GB of memory on a consumer level product…?”  After much hand wringing and mumbling someone comes up with, “I know!  They can span it across two motherboards!  That way they have to buy an extra motherboard AND a CPU!  Think of our attach rate!”  And there was much rejoicing. 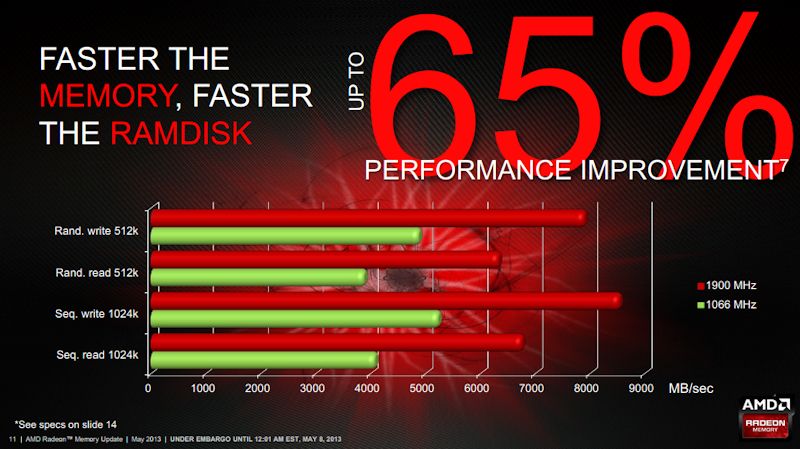 So yes, more memory that goes faster is better.  Radeon RAMDisk is not just a comic superhero, it can improve overall system performance.  Combine the two and we have AMD Radeon Memory RG2133 with 64 GB of RAMDisk.  Considering that the top SKU will feature 4 x 4GB DIMMS, a user only needs to buy four kits and four motherboards and processors to get a 64GB RAMDisk.  Better throw in another CPU and motherboard so a user can at least have 16GB of memory available as, you know, memory.

Perhaps my tone was a bit too sarcastic, but I just am not seeing the value here.  Apparently (and I was not given this info before hand) the 4 x 4 GB kits with the 64 GB RAMDisk will retail at $155.  Taking a quick look at Newegg I see that a user can buy quite a few different 2 x 8 GB 2133 kits anywhere from $139 to $145 with similar or better latencies/voltages.  Around $155 users will get better latencies and voltages down to 1.5v.  For 4 x 4GB kits we again see prices start at the $139 mark, but there are a significant number of other kits with again better voltages and latencies from $144 through $155.

Users can also get the free version of the Radeon RAMDisk that will utilize up to 4GB of space.  There are multiple other software kits for not a whole lot of money (less than $10) that will provide you up to 16 GB of RAMDisk.  I just find the whole kit to be comparable to what is currently out there.  Offering a 64 GB RAMDisk for use with 16 GB of total system memory just seems to be really silly.  The only way that could possibly be interesting would be if you could allocate 8 GB of that onto RAM and the other 56 GB onto a fast SSD.  I do not believe that to be the case with this software, but I would love to be proved wrong.

RAM that won’t cause a bottleneck

Buy some cool accessories for your RAM

The asking price of G.Skill’s DDR3-1866 sniper kit is right on target