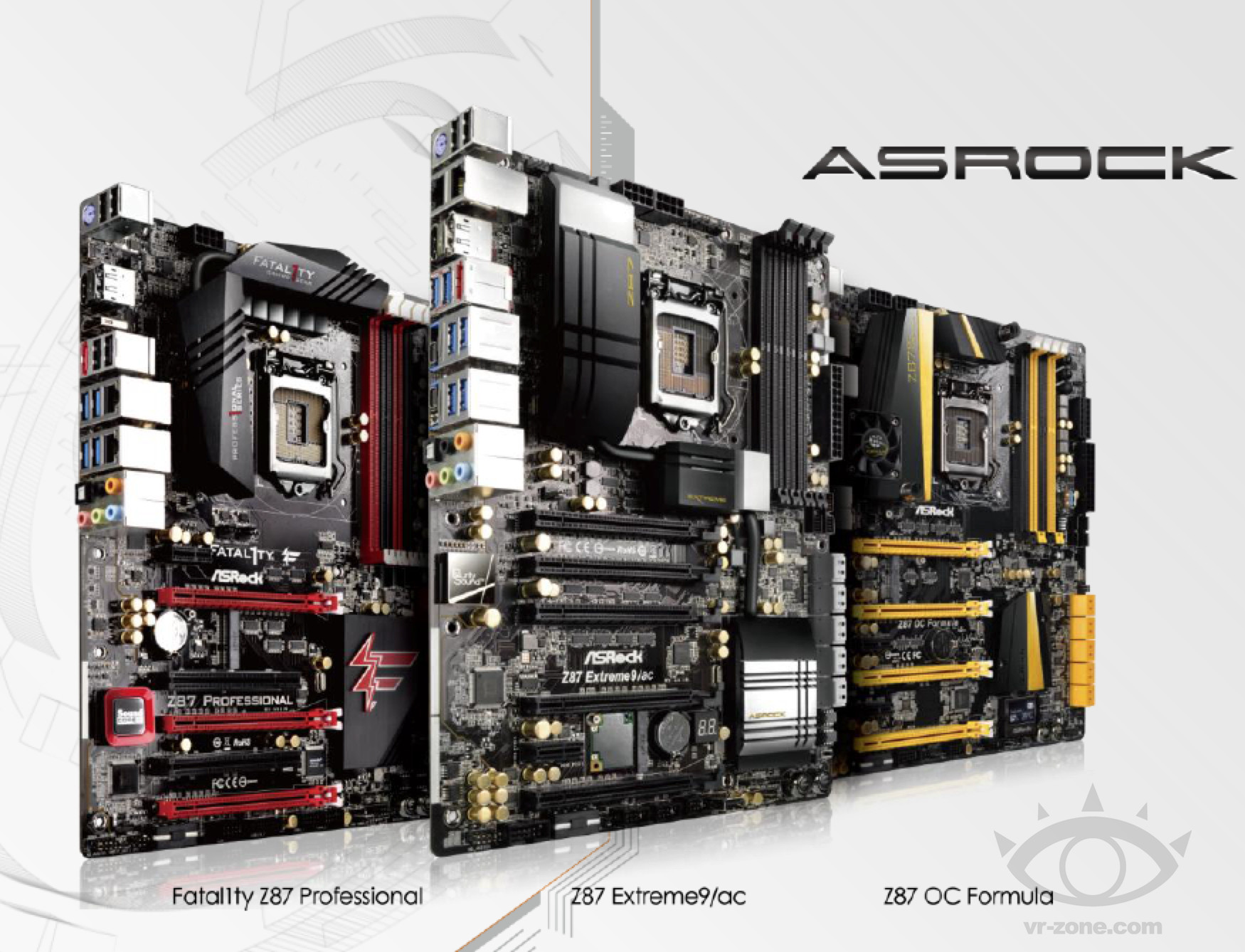 The launch of Intel’s next-generation Haswell processors and Z87 chipset is getting closer, and the various motherboard vendors have started teasing their upcoming product lines. Taiwan-based motherboard manufacturer ASRock is the latest company to detail its initial Z87 lineup, and it is fairly extensive.

ASRock will be launching LGA 1150 boards under its Extreme, OC, and Fatal1ty series. The Z87 Extreme series is intended for enthusiasts that need the the most connectivity options possible, including having the highest number of PCI-E slots. The Z87 OC Formula motherboards have beefy VRM hardware and are built to be pushed to the limit by overclockers. Finally, the Fatal1ty-branded motherboards are aimed at PC gamers and support 3 way multi-GPU setups and Creative Sound Core 3D audio chips. Many of the ASRock boards and an alternative SKU with an included 802.11ac Wi-Fi card. These boards are identified by the “/ac” text in their product names.

The initial ASRock Z87 Extreme series launch will include the following boards:

All of these boards will provide plenty of PCI-E slots and rear IO options that include eSATA, USB 3.0, at least one Gigabit LAN port (and dual on some boards), HDMI video outputs, and both digital and analog audio outputs. Note that the top three PCI-E 3.0 x16 slots are rather close together on the Extreme 9 board. This lends credence to the Extreme series use as more of an enthusiast’s work rig with PCI-E SSD accelerator or hardware RAID cards rather than strictly a multi-GPU setup.

The OC series will include the following boards geared for Intel’s Haswell processors:

The Z87 OC Formula series will launch with two boards, one that is full ATX and one that is Micro-ATX. These boards are similar in features and design to the Extreme 6 motherboard, but have additional hardware to facilitate overclocking.

Finally, the gamer-centric Fatal1ty series is aimed at high-end gaming PCs. The series will launch with the following boards:

Pricing and availability are still unknown, but the company has quite the lineup planned, and the boards should cover a wide breadth of price points. It is nice to see the Micro ATX options as well as the standard ATX models. Now, we just need some Mini-ITX Z87 boards! Additional photos of the Z87 motherboards are available over at Tech Power Up.

ECS jumps into the enthusiast market