The Intel HD Graphics are joined by Iris

Intel has taken a bit of a lead on the Haswell release by detailing information about the new graphics systems.

Intel gets a bad wrap on the graphics front.  Much of it is warranted but a lot of it is really just poor marketing about the technologies and features they implement and improve on.  When AMD or NVIDIA update a driver or fix a bug or bring a new gaming feature to the table, they are sure that every single PC hardware based website knows about and thus, that as many PC gamers as possible know about it.  The same cannot be said about Intel though – they are much more understated when it comes to trumpeting their own horn.  Maybe that's because they are afraid of being called out on some aspects or that they have a little bit of performance envy compared to the discrete options on the market.

Today might be the start of something new from the company though – a bigger focus on the graphics technology in Intel processors.  More than a month before the official unveiling of the Haswell processors publicly, Intel is opening up about SOME of the changes coming to the Haswell-based graphics products.

We first learned about the changes to Intel's Haswell graphics architecture way back in September of 2012 at the Intel Developer Forum.  It was revealed then that the GT3 design would essentially double theoretical output over the currently existing GT2 design found in Ivy Bridge.  GT2 will continue to exist (though slightly updated) on Haswell and only some versions of Haswell will actually see updates to the higher-performing GT3 options. 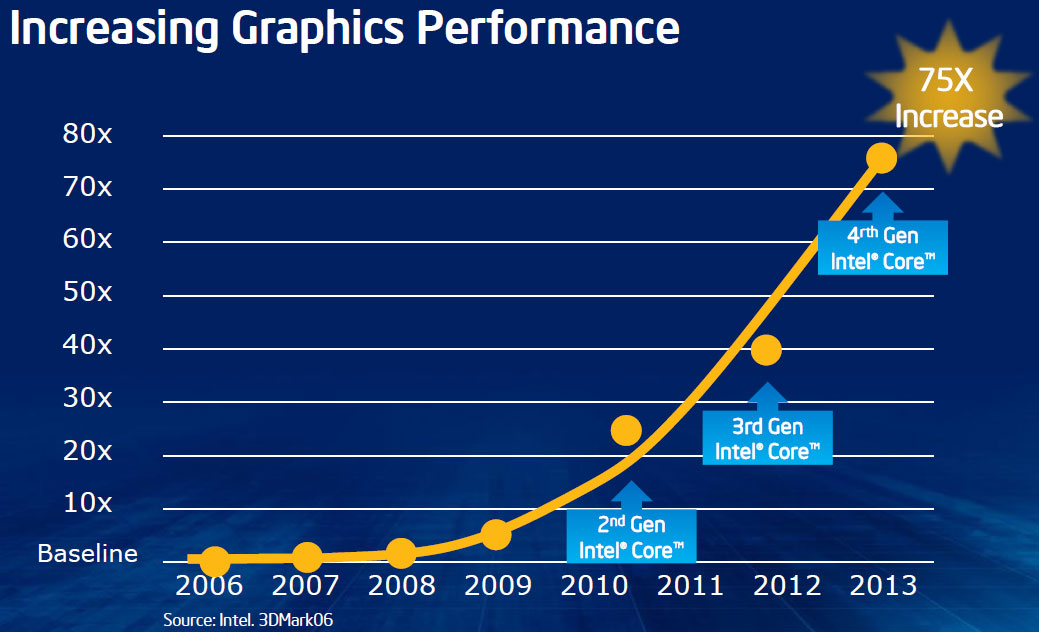 In 2009 Intel announced a drive to increase graphics performance generation to generation at an exceptional level.  Not long after they released the Sandy Bridge CPU and the most significant performance increase in processor graphics ever.  Ivy Bridge followed after with a nice increase in graphics capability but not nearly as dramatic as the SNB jump.  Now, according to this graphic, the graphics capability of Haswell will be as much as 75x better than the chipset-based graphics from 2006.  The real question is what variants of Haswell will have that performance level… 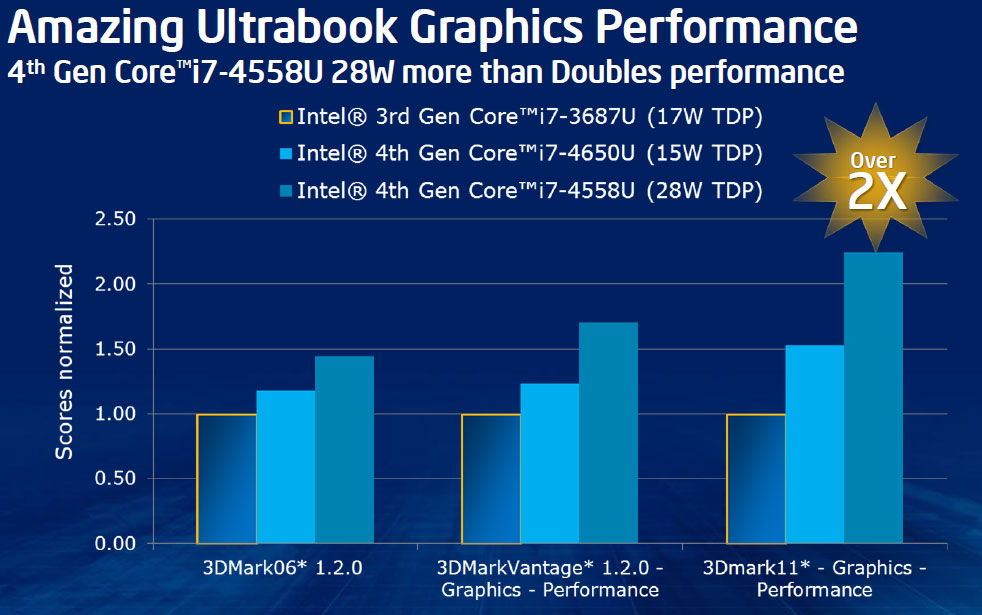 I should note right away that even though we are showing you general performance data on graphics, we still don't have all the details on what SKUs will have what features on the mobile and desktop lineups.  Intel appears to be trying to give us as much information as possible without really giving us any information.

That being said, what can we gleam from this data?  First, compare the 15W Haswell (Intel i7-4650U) to the 17W Ivy Bridge (i7-3687U) and you'll find a modest 10-25% increase in performance.  Though smaller than the 75x number we are seeing above this increase is impressive considering we are running at a lower TDP level.  The Core i7-4558U is a 28W part that is seeing 50-75% increases in older 3DMark tests and more than 2x in 3DMark11.  Considering the TDP offset, these are good but not amazing results. 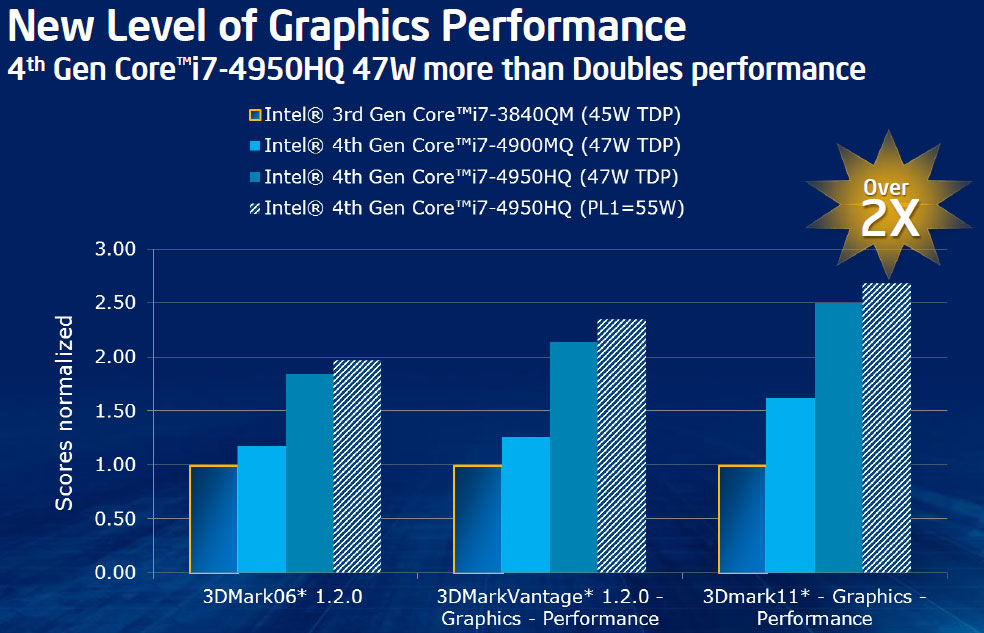 Things get more interesting and even more confusing here as we get into the higher powered notebook parts at the 45 watt level.  Comparing Haswell and Ivy Bridge you'll see two very different results.  The Core i7-4900MQ has the same kind of performance gains as the parts list above (10-25% in earlier 3DMark scores) but the Core i7-4950HQ sees jumps of 1.8x and 2.2x!  Why the difference?  While not disclosed in the meetings we are hearing that the H-series of parts will be the ones to include the embedded DRAM (now called High Speed Memory by Intel; seriously, not making that up).  The second 4950HQ result with a higher TDP of 55 watts sees improves things even more.

The inclusion of embedded DRAM (or eDRAM) on the chip with certain Haswell processors offers up some interesting performance and power tradeoffs.  The memory definitely increases power consumption and will likely mean slower CPU clock rates to meet the same 47 watt TDP levels show above (between standard and eDRAM versions of the Core i7-4900).  But the performance gains are astounding and could really remove the need for low-cost discrete graphics in mainstream notebooks.  Certain professional applications could also benefit greatly from the sharing of that cache data between GPU and GPU cores. 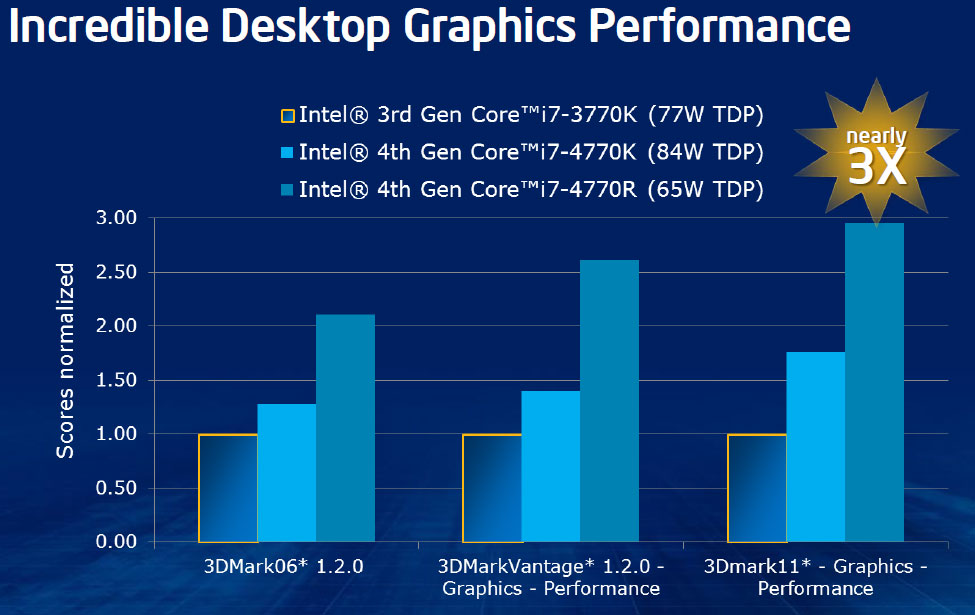 On the desktop side, we see a similar pattern.  The Core i7-4770K will be the enthusiasts CPU of choice but will not include the eDRAM for cost and power reasons.  The i7-4770R though will have that eDRAM in place and with it sees nearly 3x the performance of Core i7-3770K in these 3DMark results.  Obviously that part would be limited to users that do not want discrete graphics on their PCs, otherwise you would be wasting some valuable x86 performance for under-utilized graphics performance. Also, it turns out that the R-series of desktop parts will be BGA only, meaning you'll be purchasing either a complete system or a board/CPU comobo at the very least.

Along with the showcasing of some new graphics benchmarks, Intel is announcing a new brand for its higher performing processor graphics options: Iris Graphics.  This brand will be used only on the top two highest levels of graphics in the upcoming 4th generation Intel Core processors.  Iris will exist along side the Intel HD Graphics name and will correspond only to SOME of the GT3 implementations of Haswell.

The 15 watt variant of Haswell with the GT3 architecture will now be called Intel HD Graphics 5000 while the 4600/4400/4200 will remain as the names for various GT2 implementations.  Intel Iris Graphics 5100 will point to a "full" GT3 implementations up to 28 watts and Iris Graphics 5200 will refer to GT3 with embedded DRAM, any various power consumption levels.

Honestly, this doesn't really making things any less confusing than they have been, it just adds another brand divider.  The numeric scale will still be your best indication of relative performance though I already wonder if some HD graphics 4600 options will outperform the 15 watt version of the HD graphics 5000…

We really need some more hands on time with the various new Intel processors to tell you what all of this means and how much it actually changes the performance outlook of Intel HD / Iris graphics compared to discrete solutions from NVIDIA and AMD.  This is really just a marketing and branding release today with enough numbers to make Intel customers and PC Perspective readers curious to know more.

That all we have for you today but most of you know the time for the full Haswell architecture unveil is getting closer and closer.  We plan on having a METRIC TON of coverage here as we approach launch day so stay tuned to PC Perspective for more!

Overclocking freedom, the likes of which we haven’t seen in quite a while