Of course, this is the area where most people buying the Y500 are going to be paying attention. It goes without saying that the Y500’s dual GPU setup should be able smoke most other laptop gaming solutions on paper, but the question is, does that capability extend to typical and even heavy real-world use? We’ll first check the Y500’s performance under popular synthetic tests, after which we’ll turn to some real games to see how it manages.

The first synthetic test in our 2013 repertoire is 3DMark. How does the Y500 fare here? 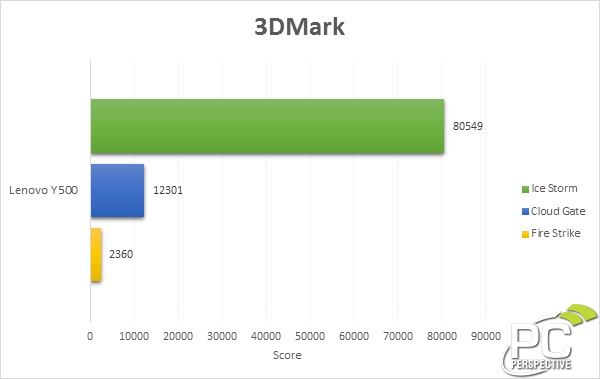 Well, thanks to its multi-GPU setup, it excels, posting scores of 12,301 in Cloud Gate and 2,360 in Fire Strike. These are excellent scores for a laptop in these benchmarks. Since this is the first time 3DMark (2013 version) has been a part of our notebook testing repertiore, we don’t yet have comparative values to provide—but generally speaking, these scores are fantastic.

Next up, just for sake of comparison with previous models, let’s take a look at 3DMark 11. 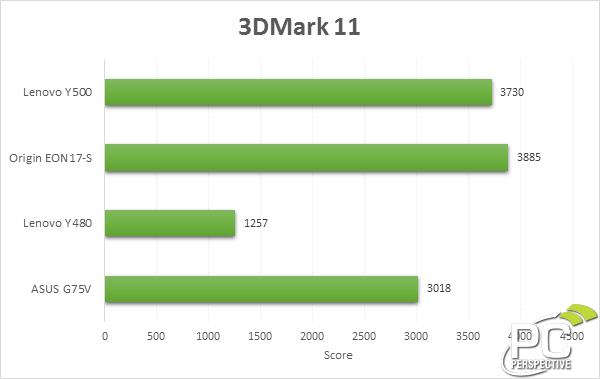 Once again, results as expected. This score not only crushes the Y480’s measely NVIDIA GT 640M LE (which posts a score of just 1257), but also hangs within 4% of the Origin EON17-S’s 3885—impressive. The Y500 is really shaping up to look like a seriously affordable contender for high-powered mobile gaming.

Let’s see how it handles real games however. First up, we’ll check out Just Cause 2, a benchmark which has since proven to be aging, but which still provides a palpable comparative landscape between previously-tested laptops. 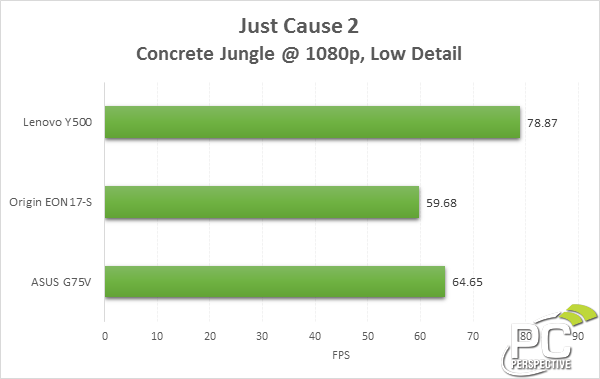 With a score of nearly 79 fps, the Y500 simply destroys this benchmark. It bests even our recorded scores for the EON17-S and the ASUS G75V by a wide margin.

Let’s move on to a game with practically unmatched popularity: StarCraft II. 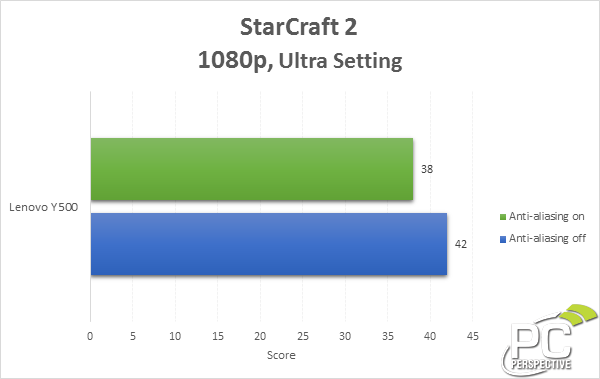 Although this is the first notebook in the database that we’ve benchmarked using SC2, these scores are solid given the 1080p resolution and Ultra/High settings across the board. For sake of curiosity we ran the benchmark with AA on and off.

While we’re on the subject of Blizzard games, why not celebrate Diablo III’s anniversary with a little more attention? 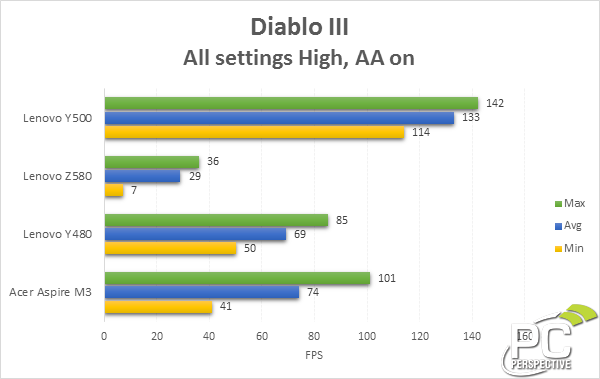 Need anything be said? It’s clear at this point that this notebook packs some serious power, and it should be able to handle even the most demanding games on respectable settings. Overall, the performance of the dual GT 650M GPUs beats the GeForce GTX 670MX and nearly doubles the performance of a single GT 650M. Only the 675MX can claim victory in most scenarios, as evidenced by the synthetic tests pitting the notebook against the EON17-S.