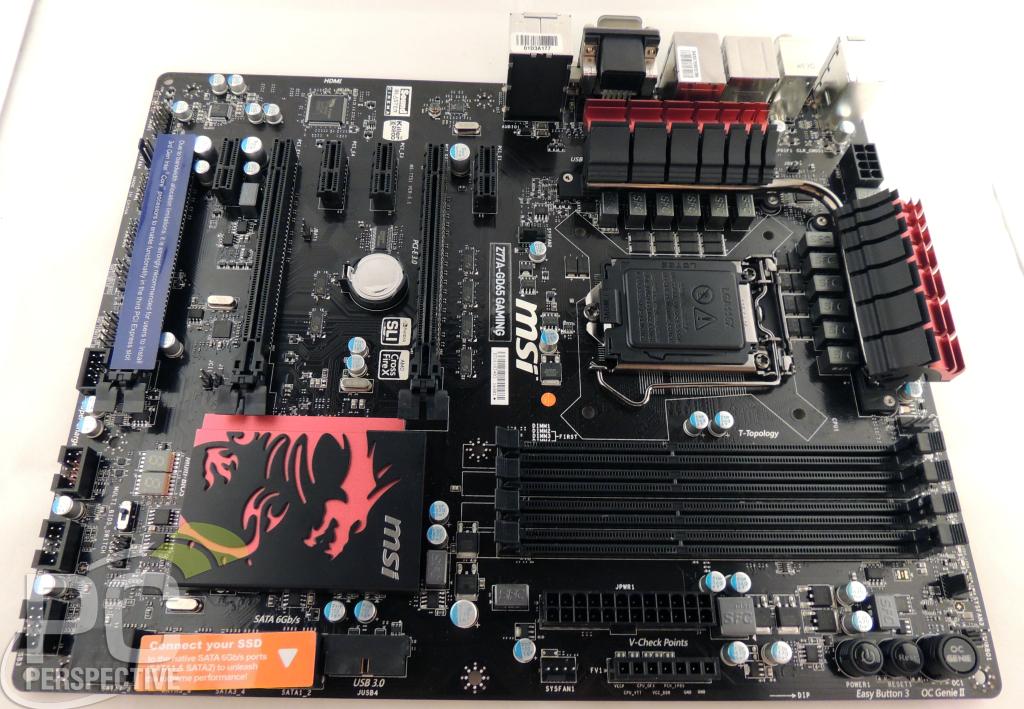 As the flagship board in MSI's gaming line of boards, the MSI Z77A-GD65 Gaming motherboard features a black and red theme with the Gaming line's dragon mascot embossed in the Southbridge heat sink. The board layout is designed with typical MSI efficiency, sporting plenty of room around all key components with enough SATA, USB, and fan headers to please anyone. 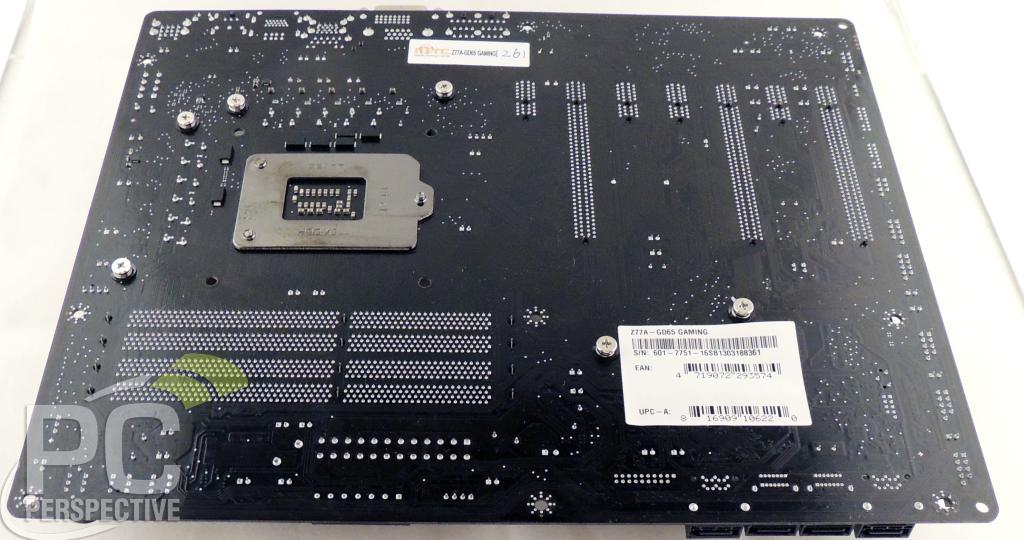 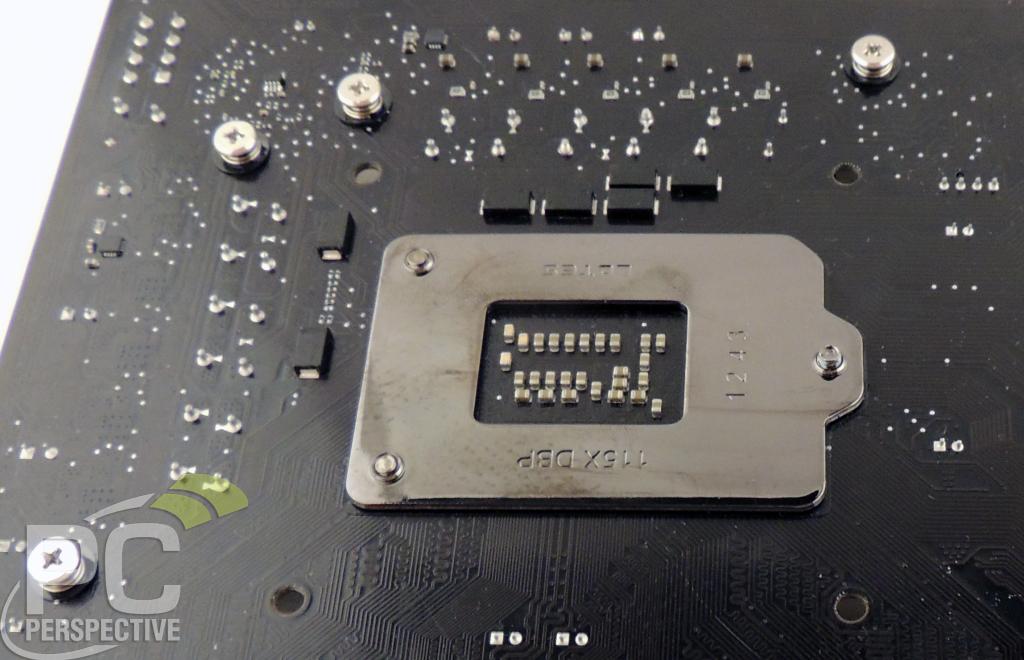 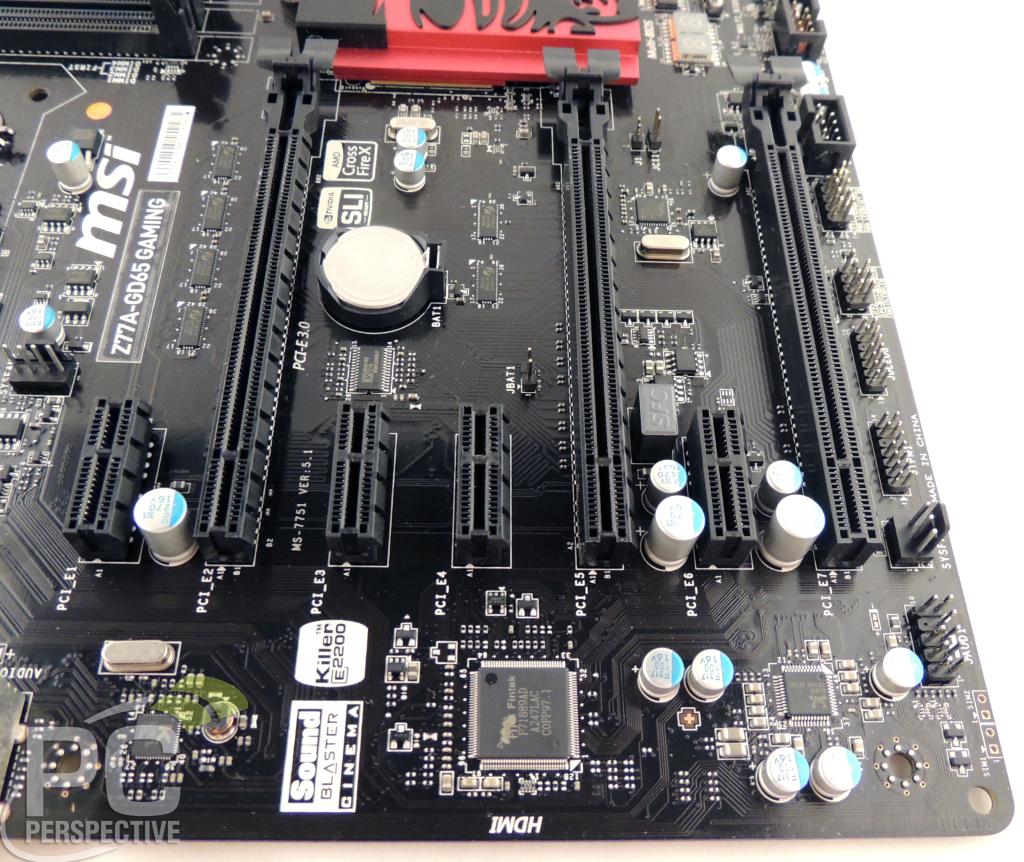 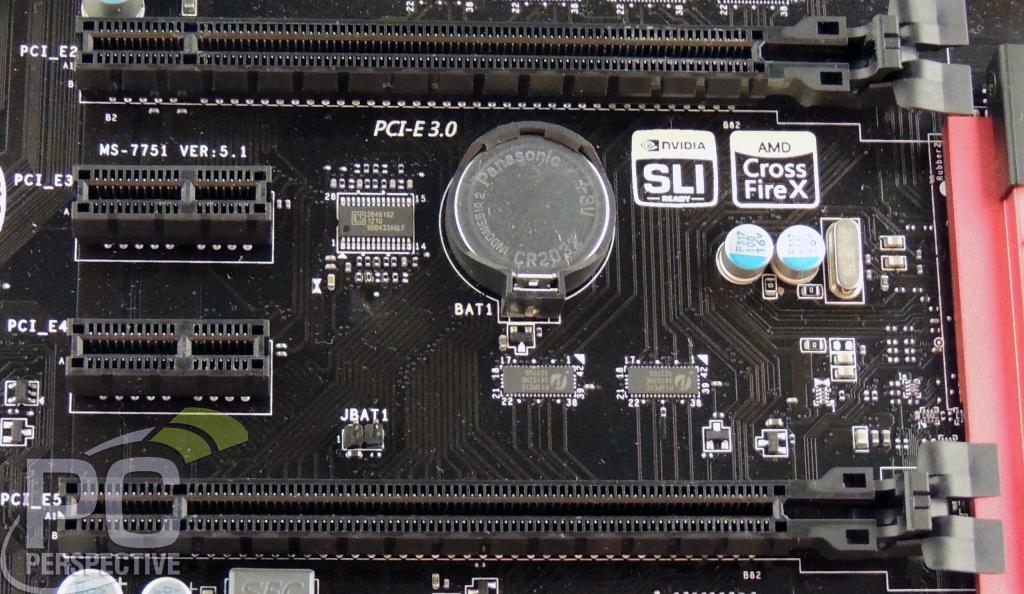 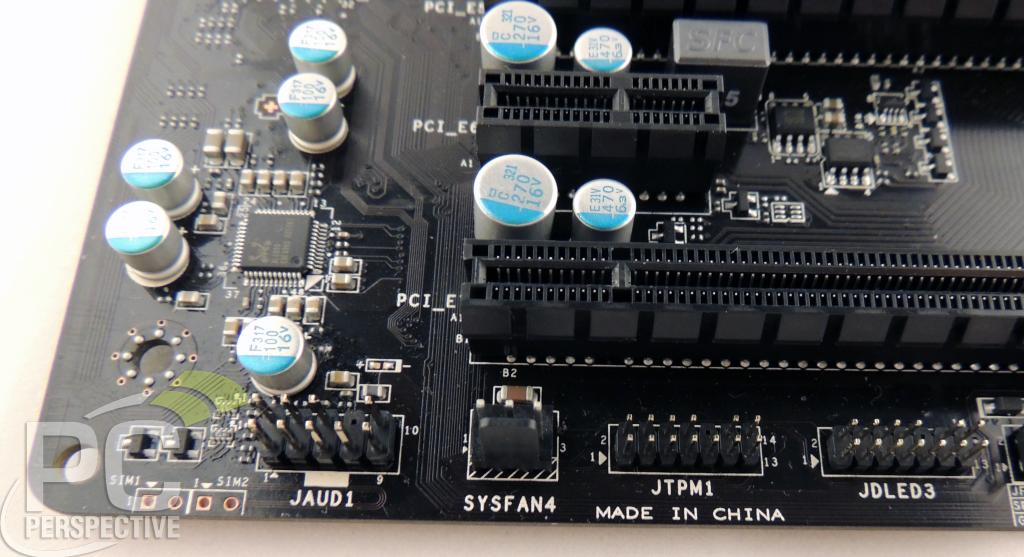 The front panel audio, SYSFAN4, TPM module (JTMP1), and Voice Genie (JDLED3) headers are located in the upper left corner of the board, along the upper outer edge of PCI-Express x16 slot 3. The Voice Genie header can be used with MSI's Voice Genie module for voice-based board control. 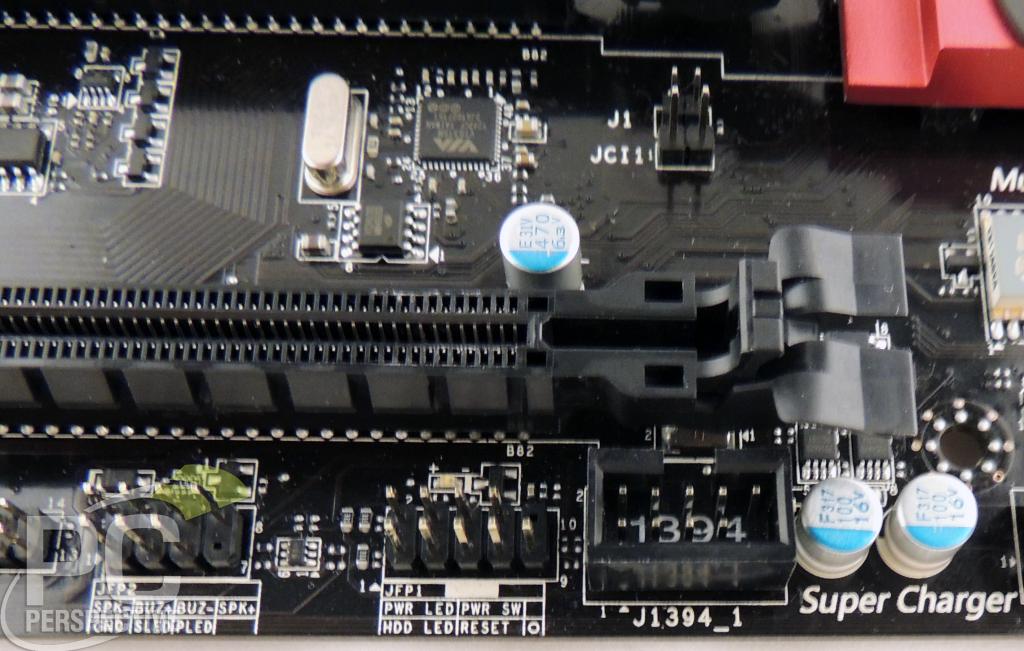 The front panel and IEEE 1394 port headers are located along the lower outer edge of PCI-Express x16 slot 3. 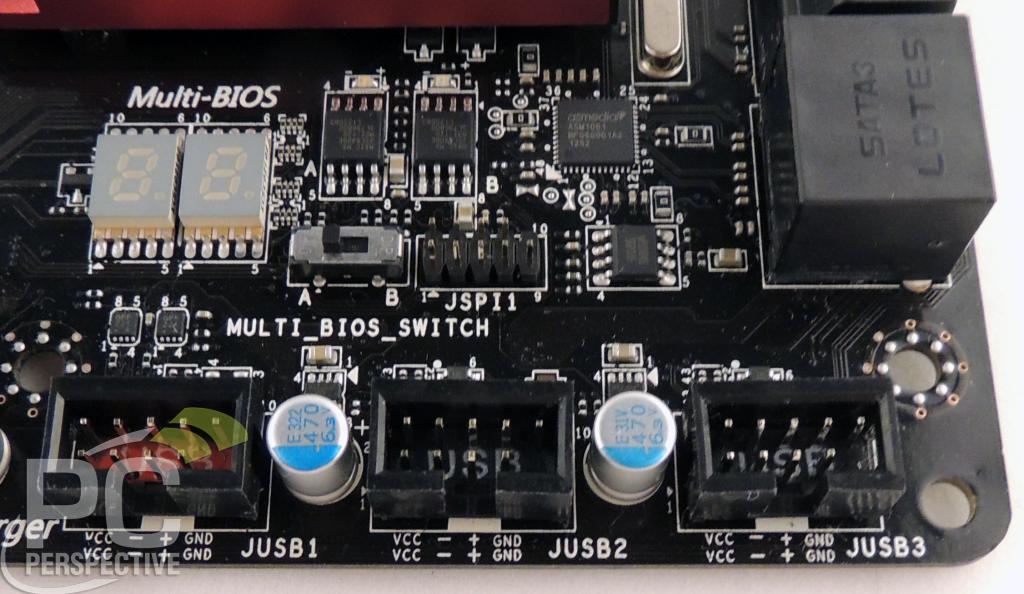 The onboard USB 2.0 and board debug (JSPI1) headers, in addition to the multi-BIOS switch and 2-digit debug LED, are located in the lower left corner of the board. The board debug header is used by MSI for board verification and testing purposes. The multi-BIOS switch allows for user switching between the primary and secondary BIOS chips, useful for system recovery. The 2-digit debug LED can be used for debugging system issues during system initialization. It displays the CPU temperature once system initialization has completed. The debug LED codes can be decoded using the table used in the motherboard manual. 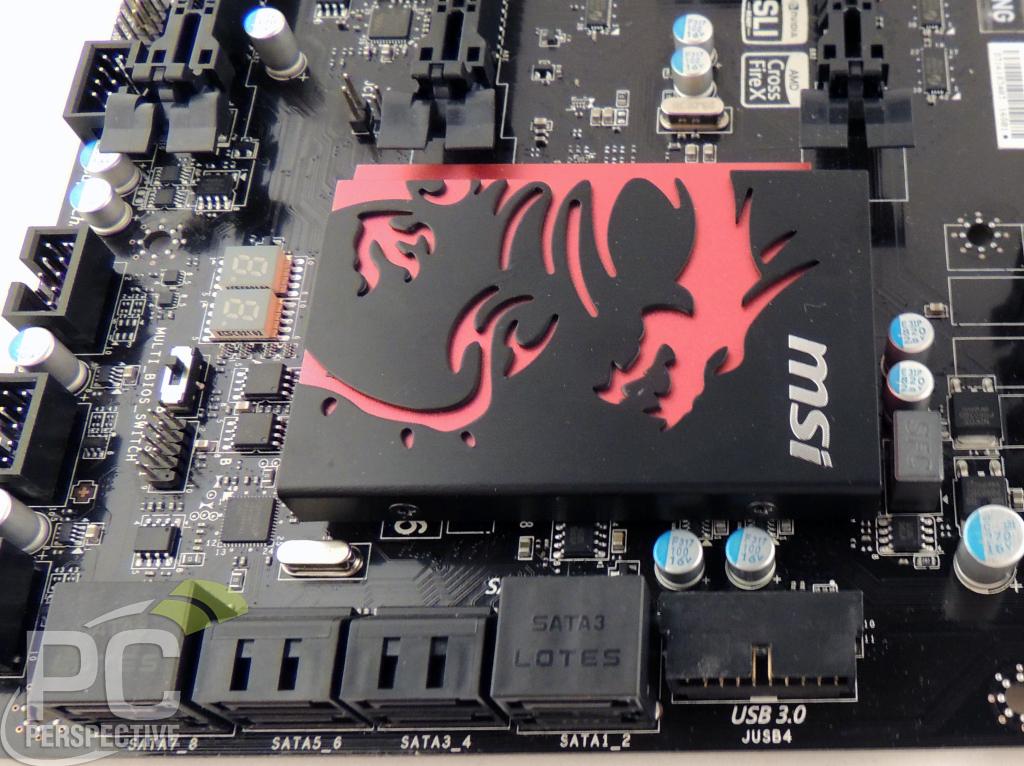 The Intel Z77 chipset is covered by a large aluminum, low profile heat sink just below the primary and secondary PCI-Express x16 slots. The heat sink is done in a red and black design with the board's dragon logo prominently featured. 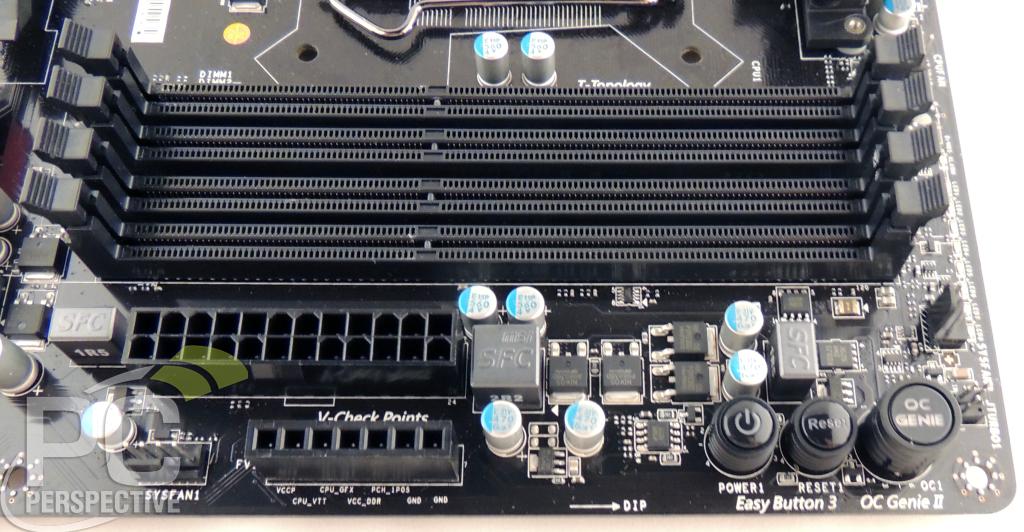 The four on-board DDR3 memory slots are located in the board's lower right corner. The primary memory slots are slots 2 and 4 with dual channel memory mode enabled when modules are seated both slots. The board supports up to 32GB of memory running at up to 3000MHz. Note that memory speeds above 1600MHz are considered overclocked speeds and are outside of the official Intel stock memory speed specifications. The 24-pin ATX power connector, V-Check Point slots, and a system fan header are located to the lower left the memory slots. Using the provided V-Check Point cables and a multi-meter, you can easily measure several board voltages directly instead of having to rely on the BIOS or windows based monitoring tools.

In the lower right corner of the board are the on-board buttons – Power, Reset, and OC Genie II – the MultiConnect Panel Connector header, the SYSFAN3 header, and the CPU power phase LEDS. The power button glows green when an active power supply is attached to the board, while the reset button glows green when the board is powered on. The OC Genie II button glow blue when the button is pressed and the OC Genie II BIOS is active. OC Genie II is an automated overclocking BIOS that overclocks the board to pre-set levels regardless of the current BIOS settings. The MultiConnect Panel Connector header (JTURBO1) can be used to connect an optional front panel device for controlling OC Genie and other board functions. The CPU power phase LEDs illuminate blue as the eight CPU-specific power phases activate. 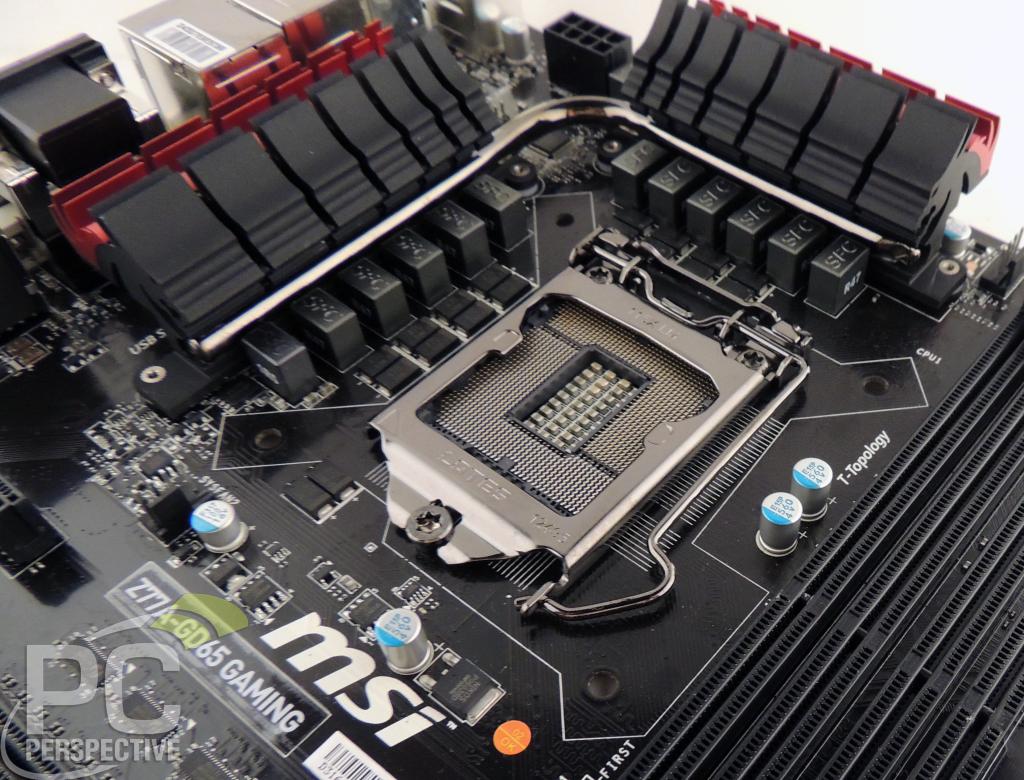 In spite of the 12 power phases dedicated to the CPU and CPU integrated devices, MSI design plenty of space into the CPU socket area to accommodate even the large coolers. Along the sockets top and right sides is a heat pipe cooling assembly covering the board's CPU power circuitry. Two additional fan headers are located to the upper left and lower right of the CPU socket. 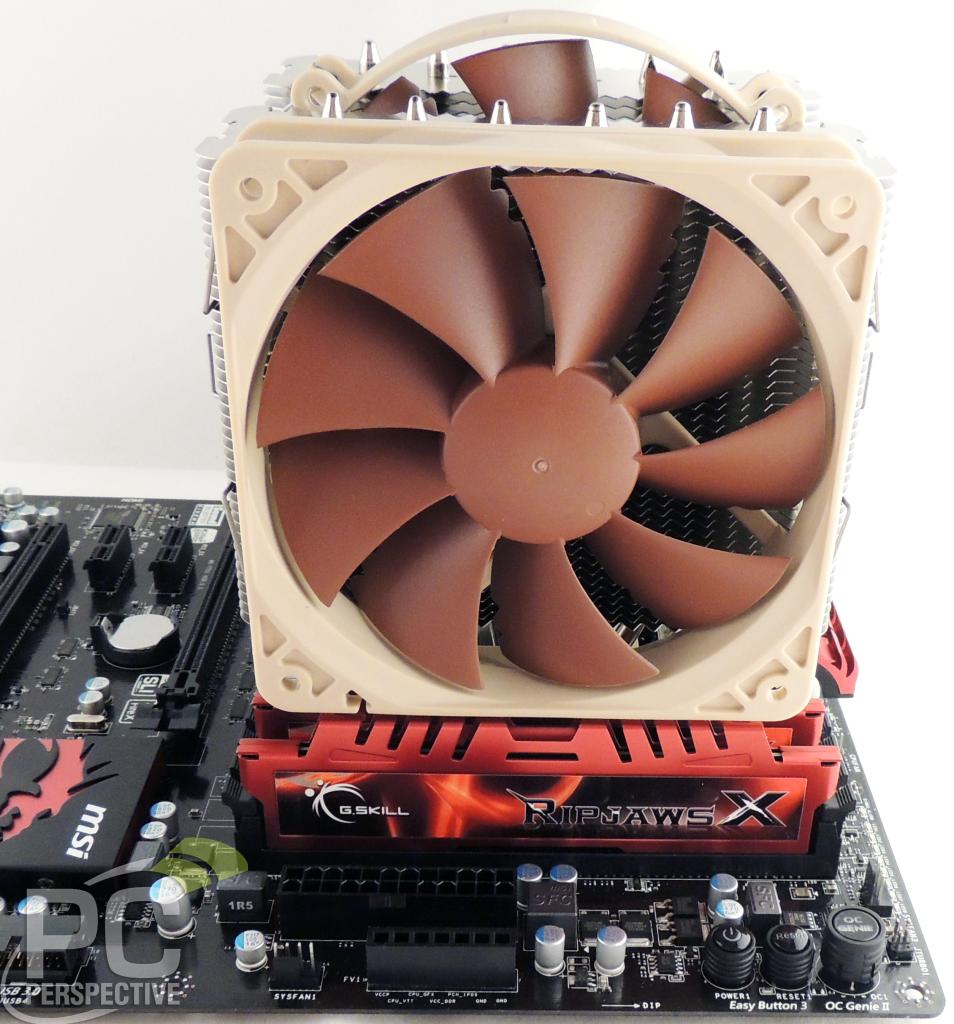 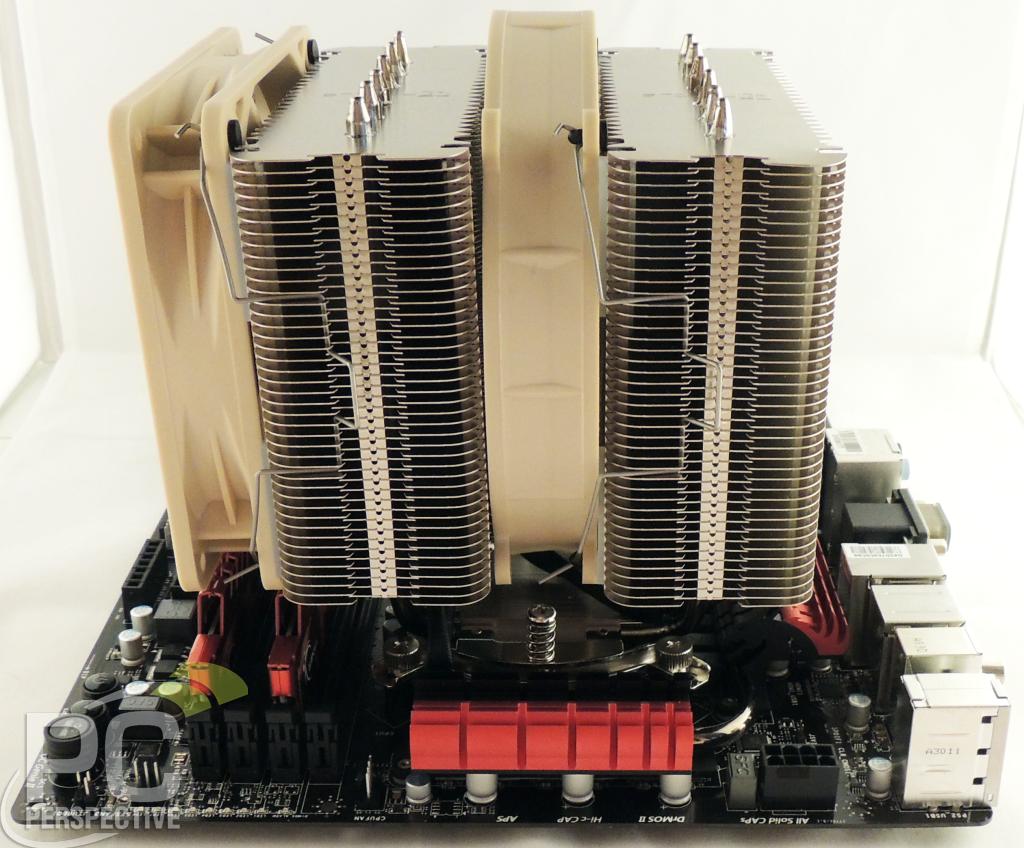 As shown, even the massive Noctua NH-D14 fits the Z77A-GD65 Gaming with no issues. From the front, the cooler looks like a tight fit with taller RAM modules, but the side shots show that there is more than enough space to accommodate larger modules. The modules shown in the pictures are G.Skill RipJawX DDR3-2133 modules with sinks equally the size of even the Corsair Vengeance line. 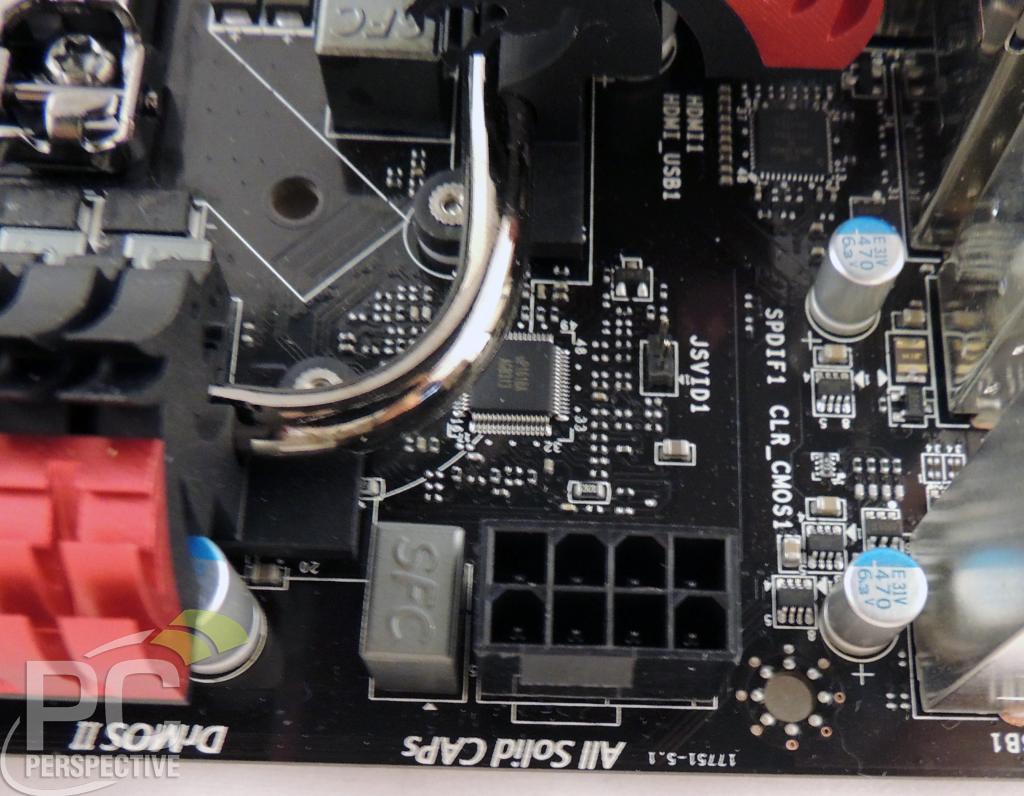 The onboard ATX12V 8-pin power connector is located to the upper right of the CPU socket and heat pipe cooler.

MSI included a healthy mix of bundle accessories in with the Z77A-GD65 Gaming motherboard. 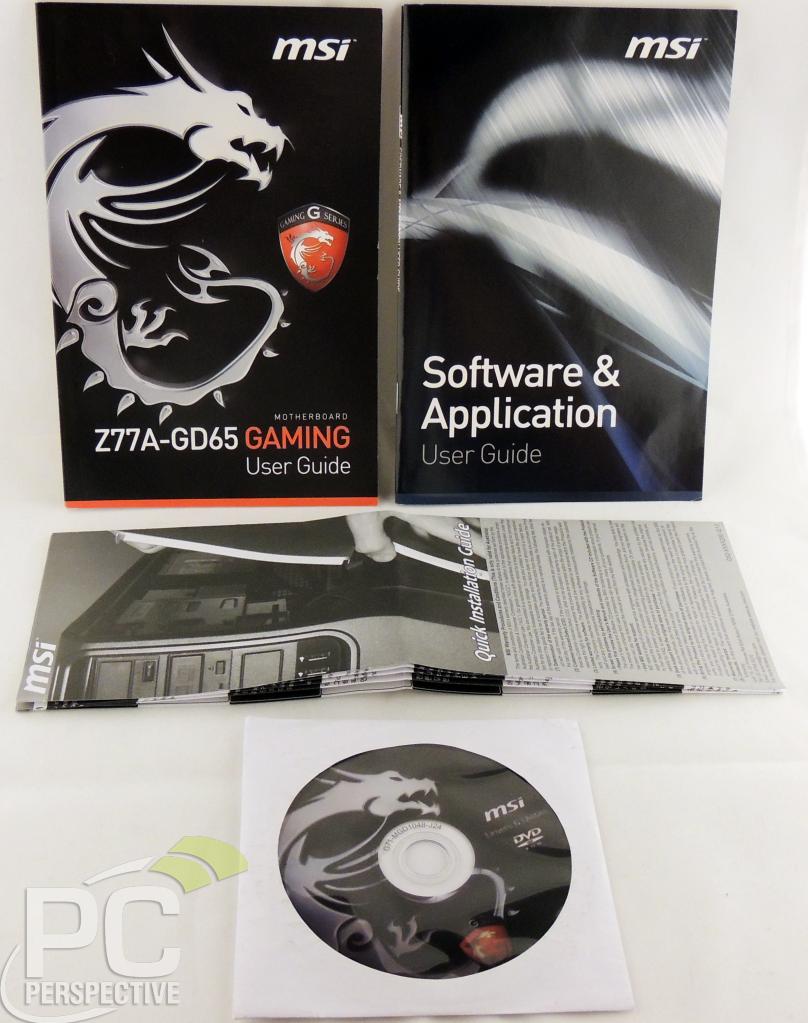 The bundled user manuals and installation DVDs provide more than enough information to get the board up and running, including a a manual detailing out the included software applications and a comprehensive fold-out quickstart guide.

The rear panel shield is a base black color with all device ports clearly marked in red for easy identification and to keep with the board's red and black theme. 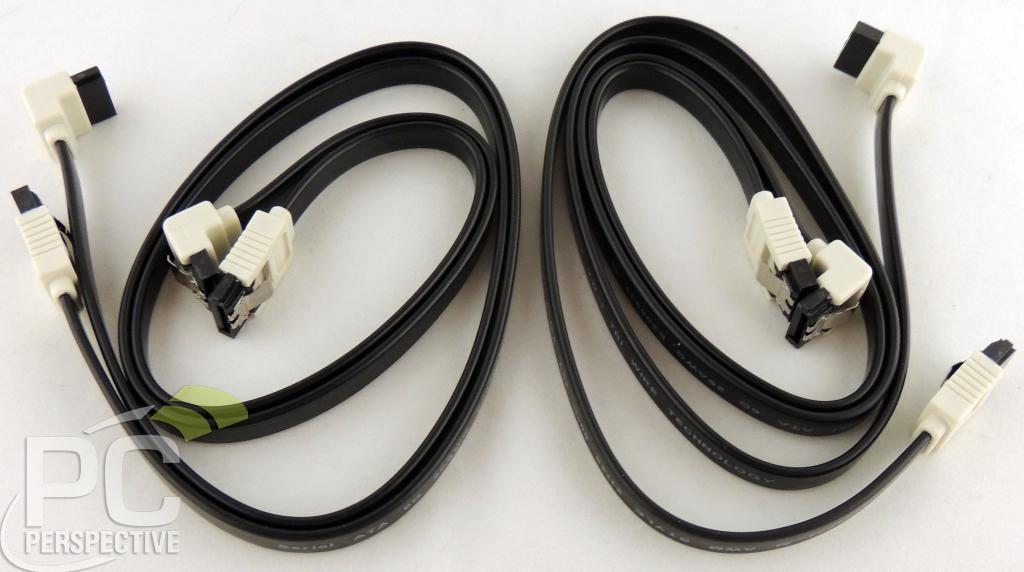 MSI includes a total of four SATA cables, rated for up to 6GB/s operation. The included cables are locking cables with a mix of straight and 90 degree connectors included. 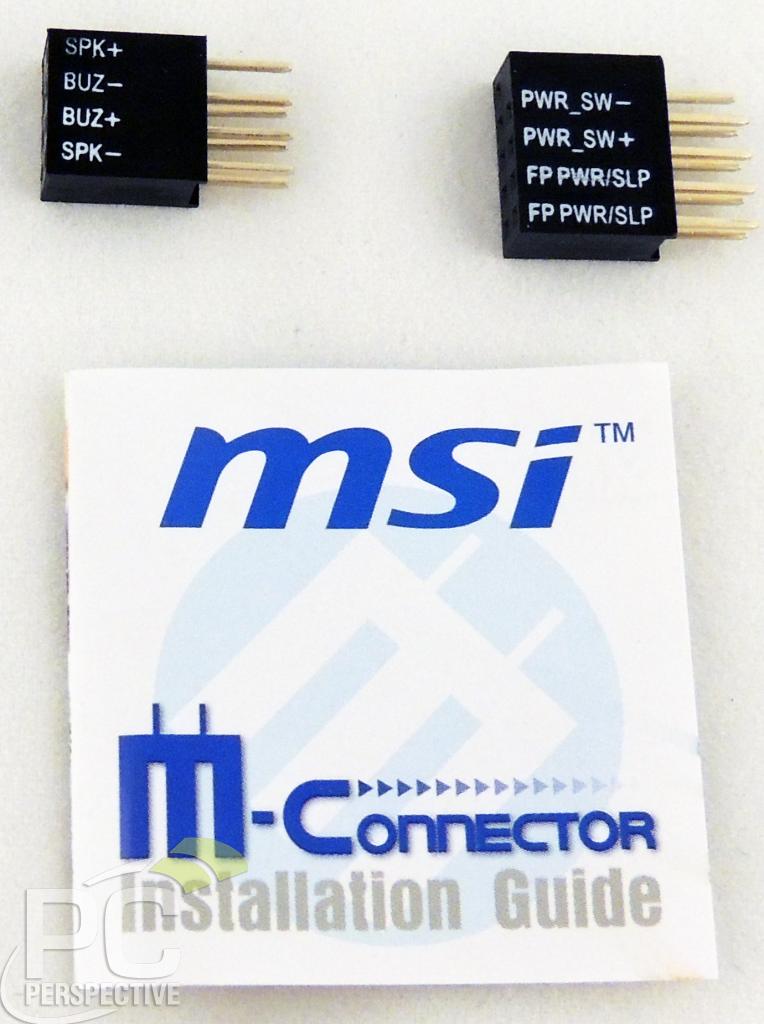 For multi-GPU use, MSI included a 2-way NVIDIA SLI connector. 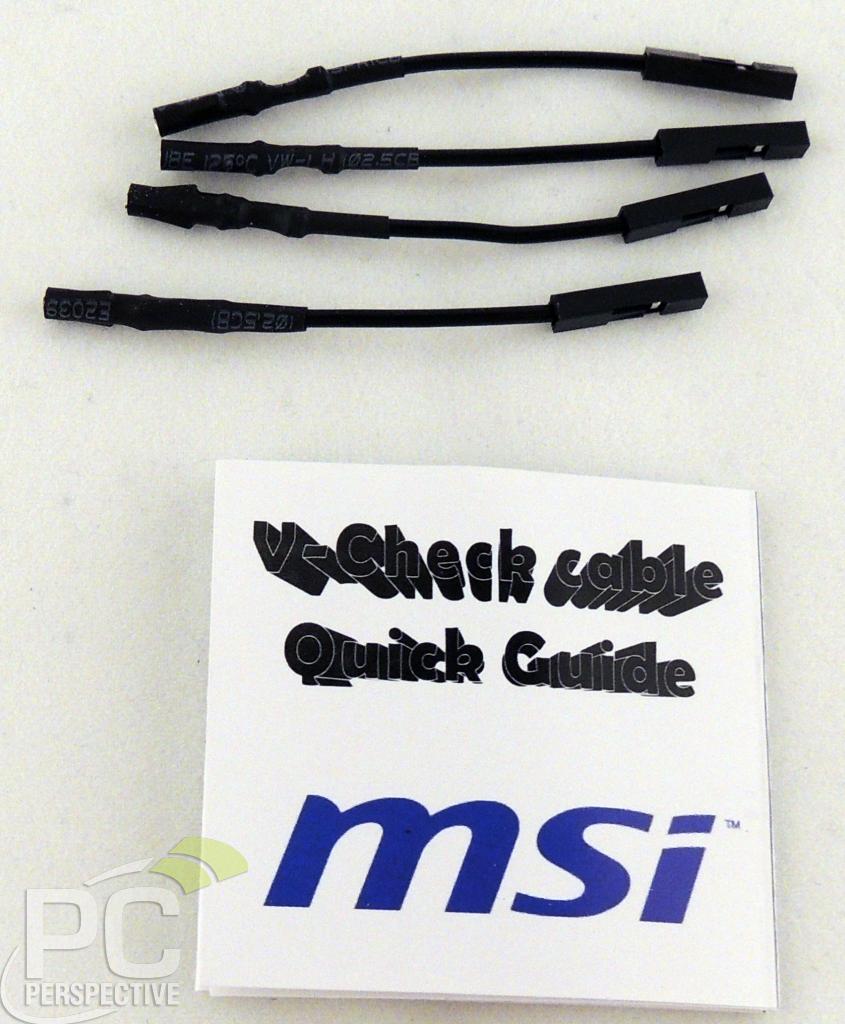 The included V-Check cables plug into the ports in the V-Check Point assembly to give easy access for measuring board voltages directly. Instead of having to stick multi-meter leads into the assembly, you attach them to these extension cables. 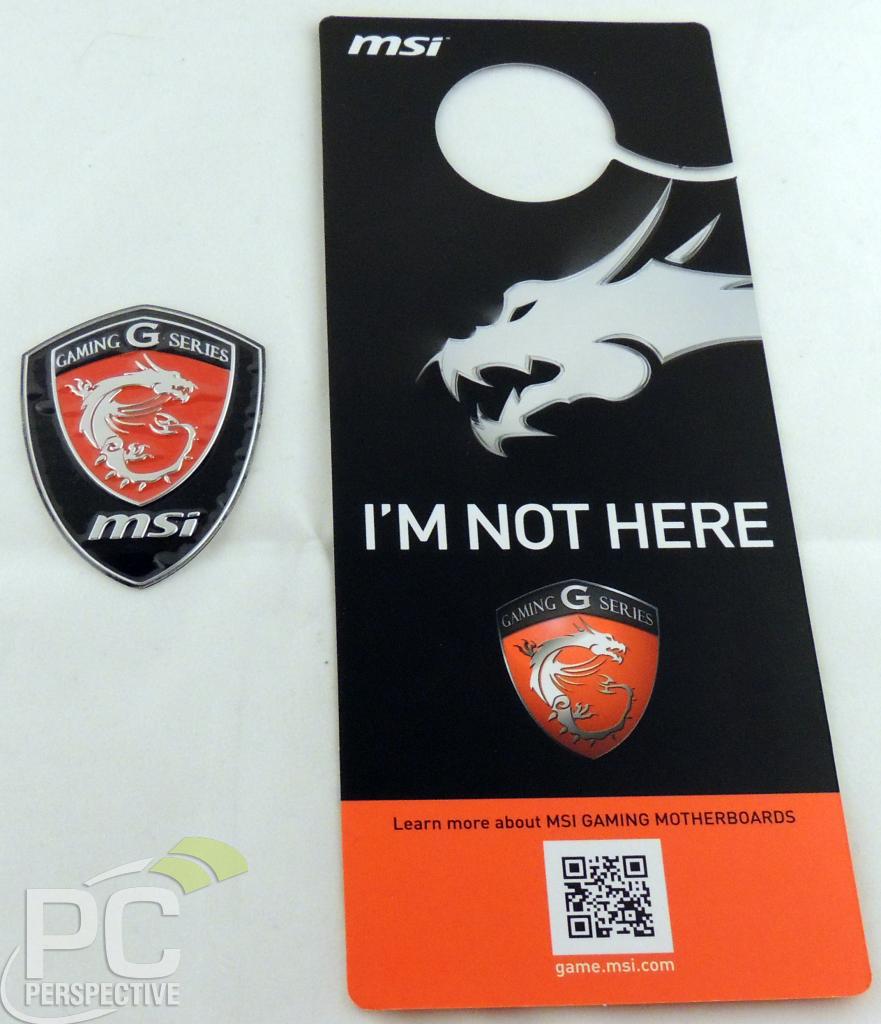 In line with the gaming-centered theme of the board, MSI includes a dragon-themed door knob hanger and a case sticker. 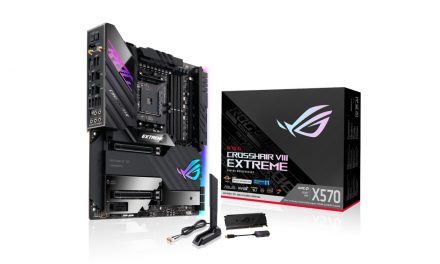