GK110 Gets a Lower Price Point

NVIDIA has a new SKU to offer that takes the GK110 GPU and cuts off some cores but has a hefty $650 price tag.

If you want to ask us some questions about the GTX 780 or our review, join us for a LIVE STREAM at 2pm EDT / 11am PDT on our LIVE page.

When NVIDIA released the GeForce GTX Titan in February there was a kind of collective gasp across the enthusiast base.  Half of that intake of air was from people amazed at the performance they were seeing on a single GPU graphics cards powered by the GK110 chip.  The other half was from people aghast of the $1000 price point that NVIDIA launched it at.  The GTX Titan was the fastest single GPU card in the world, without any debate, but with it came a cost we hadn't seen in some time.  Even with the debate between it, the GTX 690 and the HD 7990, the Titan was likely my favorite GPU, cost no concerns. 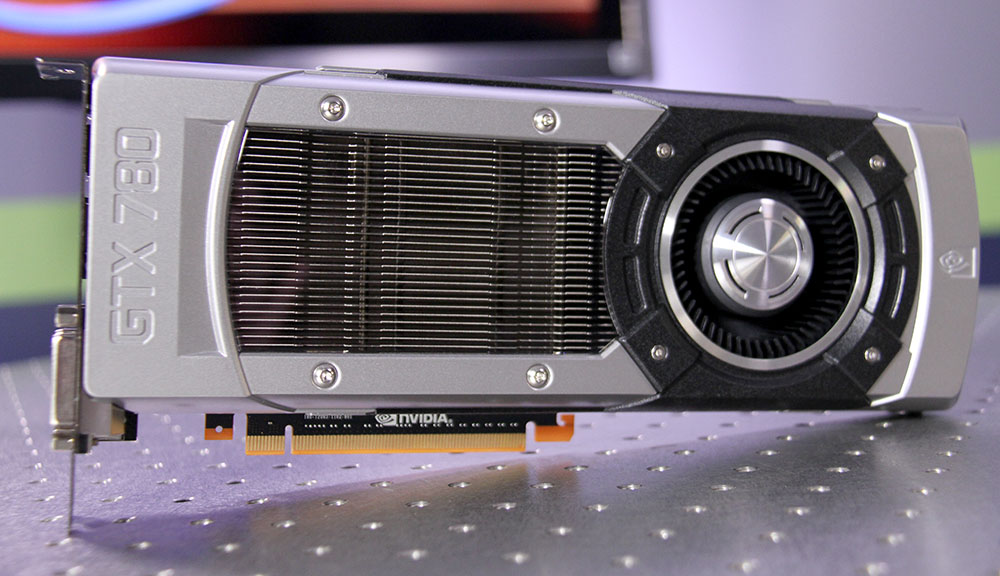 Today we see the extension of the GK110, by cutting it back some, and releasing a new card.  The GeForce GTX 780 3GB is based on the same chip as the GTX Titan but with additional SMX units disabled, a lower CUDA core count and less memory.  But as you'll soon see, the performance delta between it and the GTX 680 and Radeon HD 7970 GHz is pretty impressive.  The $650 price tag though – maybe not.

We held a live stream the day this review launched at https://pcper.com/live.  You can see the replay that goes over our benchmark results and thoughts on the GTX 780 below.

As I mentioned above, the GTX 780 is a pared-down GK110 GPU and for more information on that particular architecture change, you should really take a look at my original GTX Titan launch article from February.  There is a lot more that is different on this part compared to GK104 than simple shader counts, but for gamers most of the focus will rest there.

The chip itself is a 7.1 billion mega-ton beast though a card with the GTX 780 label is actually utilizing much fewer than that.  Below you will find a couple of block diagrams that represent the reduced functionality of the GTX 780 versus the GTX Titan: 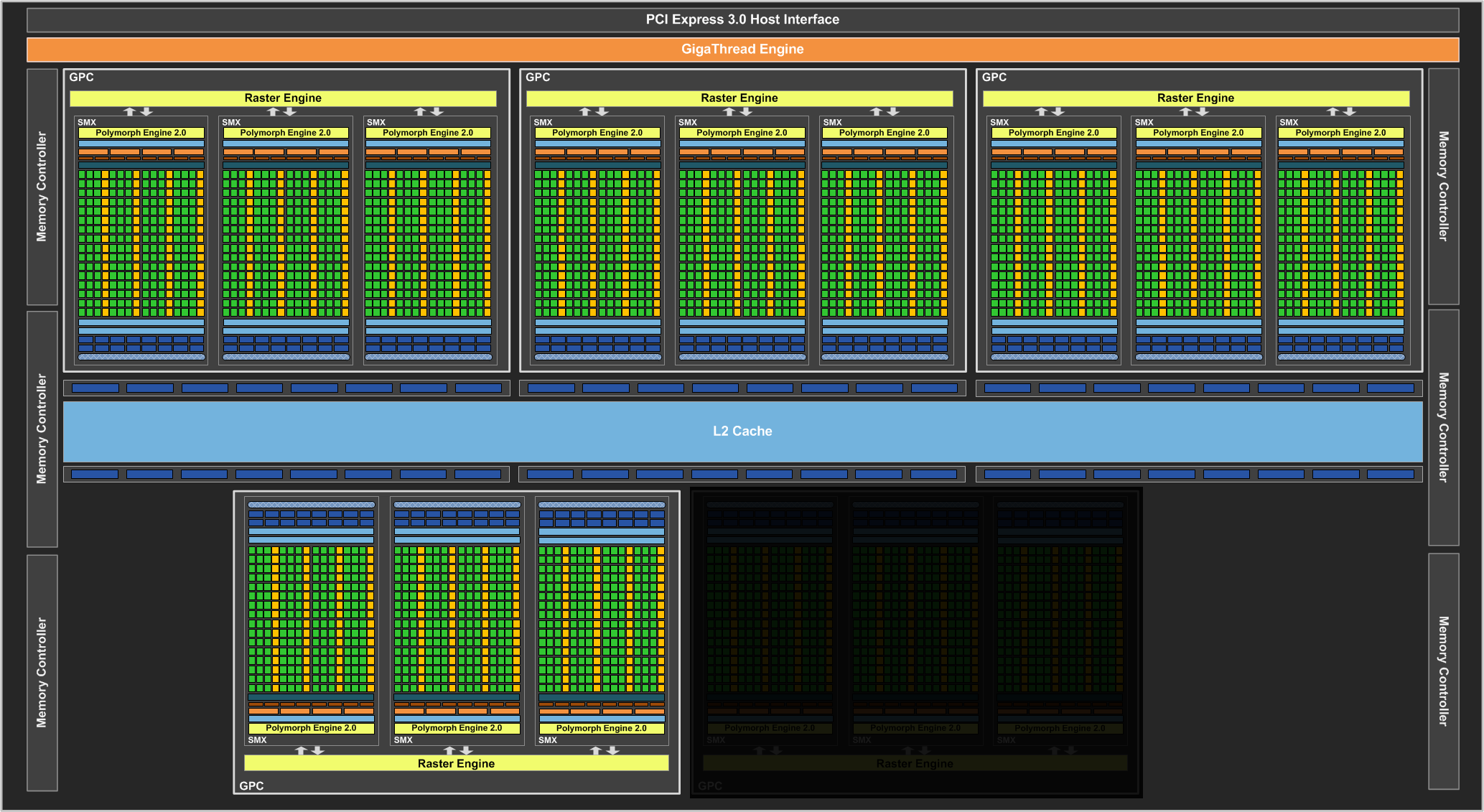 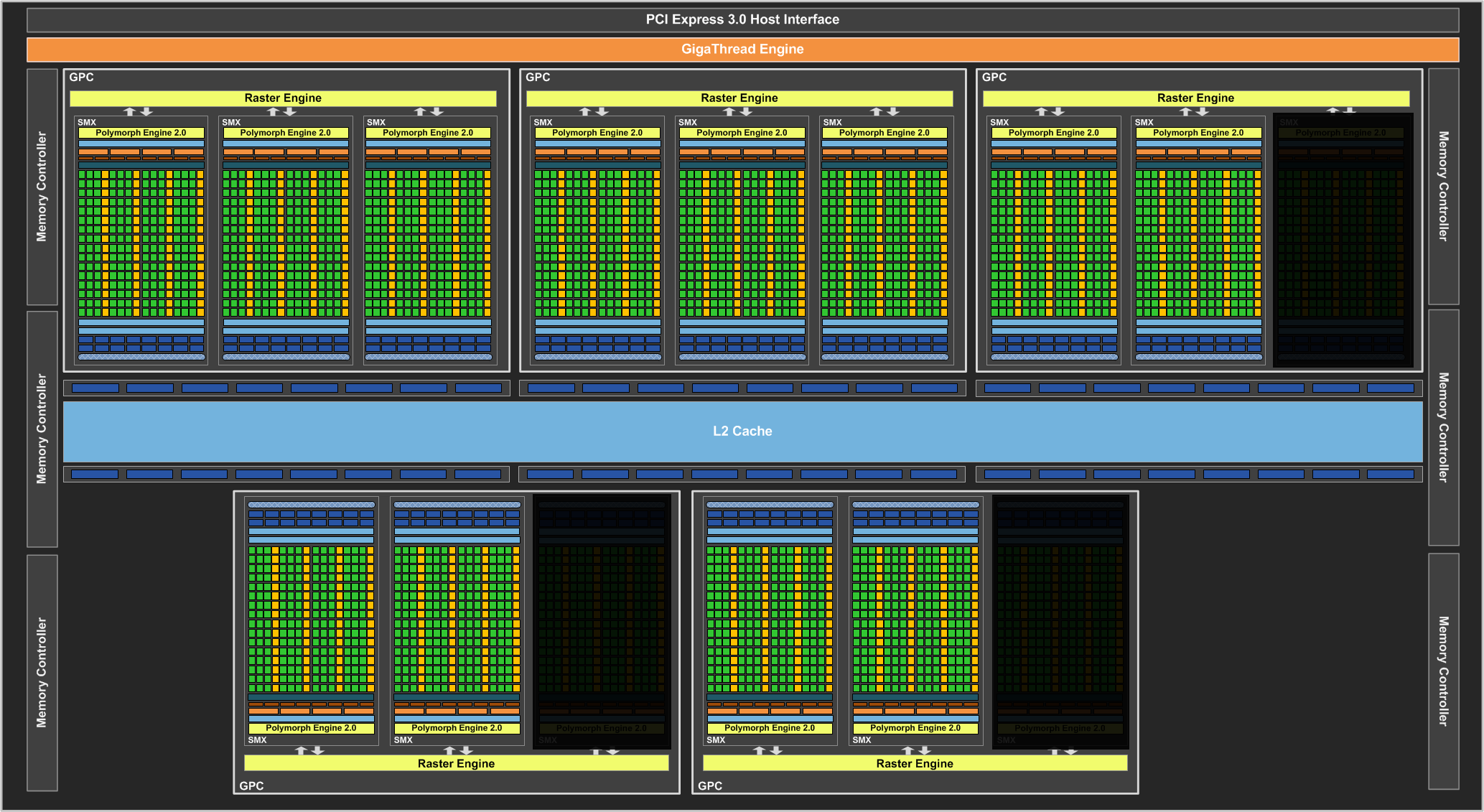 While the GTX Titan sported 2,688 CUDA cores and 14 SMXs, the GTX 780 will have 12 SMX units for a total CUDA core count of 2,304.  NVIDIA has two different options for chip configurations.  One is to disable an entire GPC unit of the GK110 chip while the other disables a single SMX in three different GPC.  Performance differences between the two should be negligible I'm told. 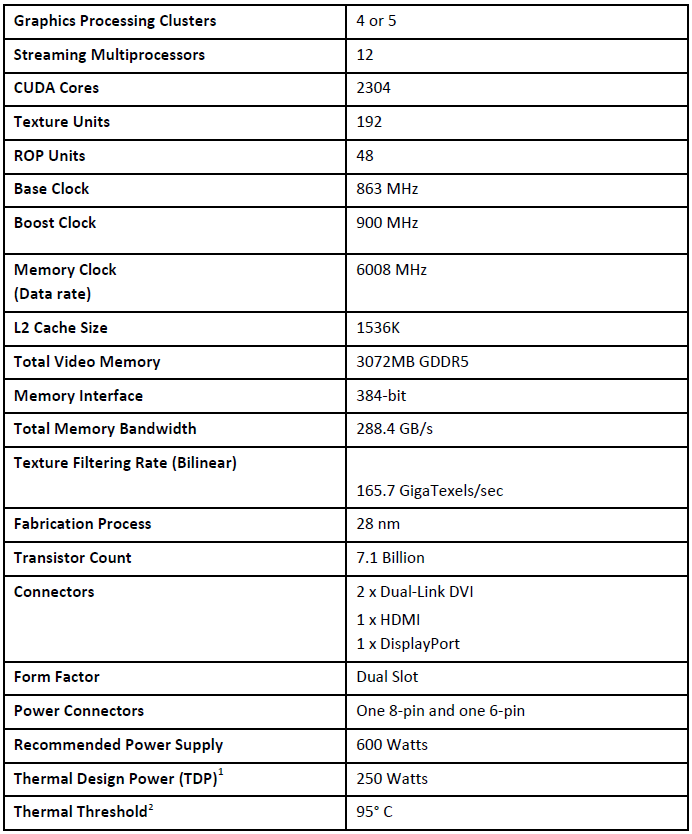 Clock speeds are actually a bit higher on the GTX 780 running at 863 MHz base and 900 MHz boost.  The memory is still running at 6.0 GHz on a 384-bit memory bus but the frame buffer itself drops from 6GB to 3GB.

The only other major hardware change is a drop from 224 to 192 texture units to align with the drop in shader performance and count.

Still, compared to the GTX 680 the new GTX 780 has noticeable performance increases.  The GTX 780 has 50% more CUDA cores, a 50% larger memory bus width and 50% more texture units.  This is at the expense of clock speed though that is 16% lower on the new GTX 780.  Obviously the GTX 780 will have much higher performance than the reference GTX 680 offerings and it will interesting to see how close the GTX 780 is in relation to the GTX Titan. 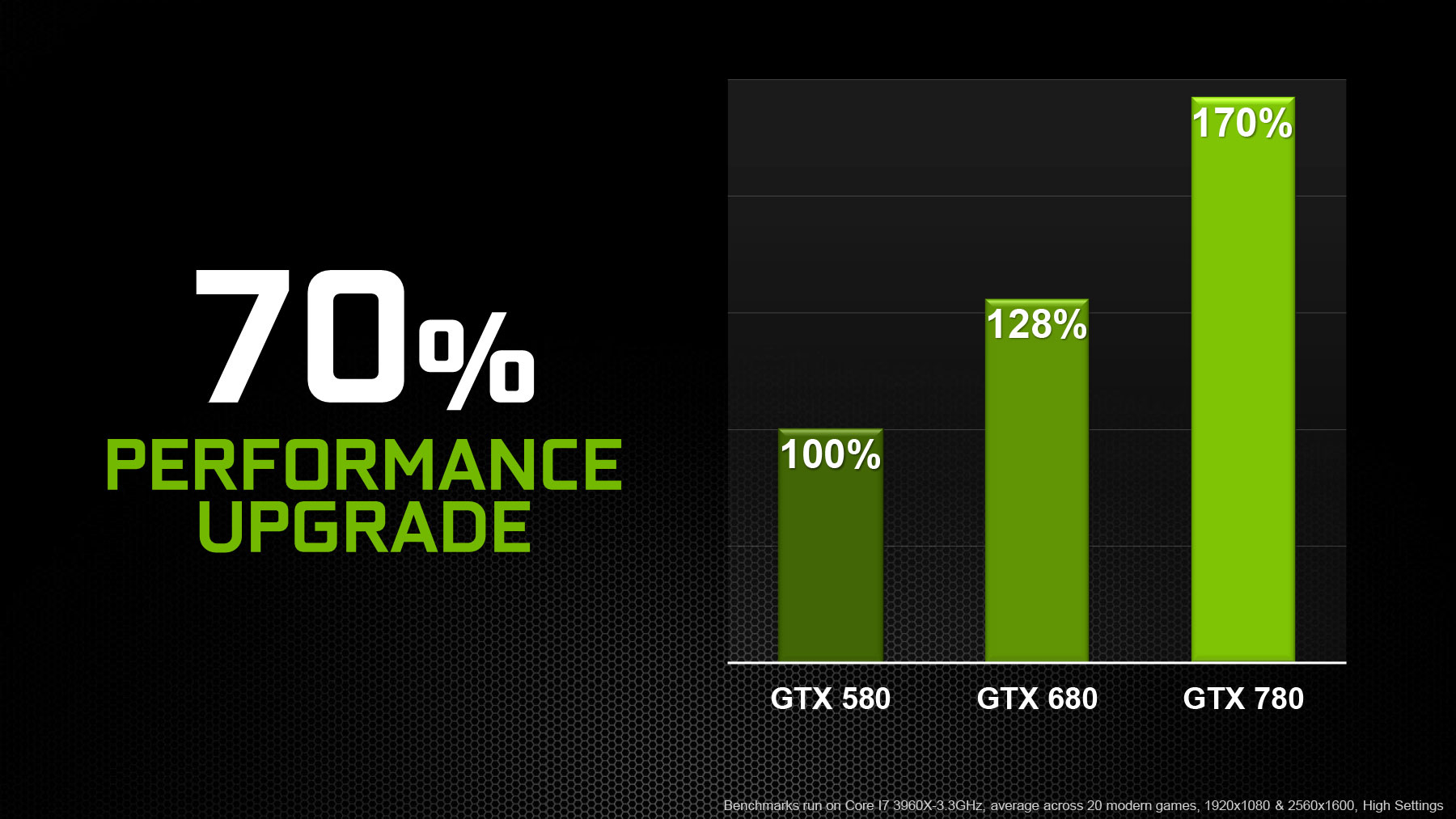 If you are one of the consumers that follows a 2 year upgrade cycle, NVIDIA claims enthusiasts will see a 70% increase in performance in relation to the GTX 580, Fermi-based flagship. 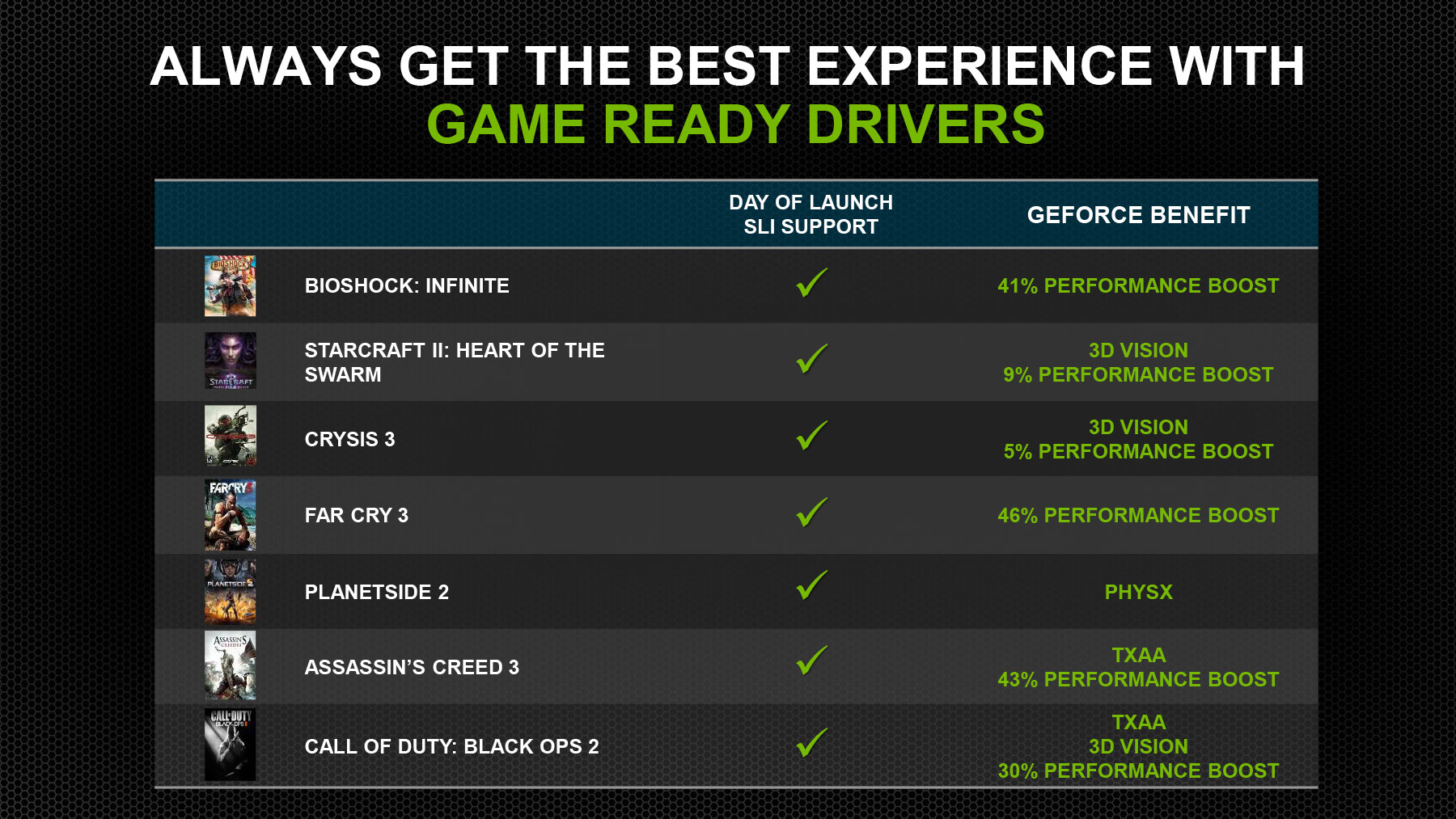 Even though AMD has been getting all of the spotlight with its Never Settle game bundles, NVIDIA wants to assure gamers that they are doing what matters most – addressing performance issues with fresh drivers on major game releases. 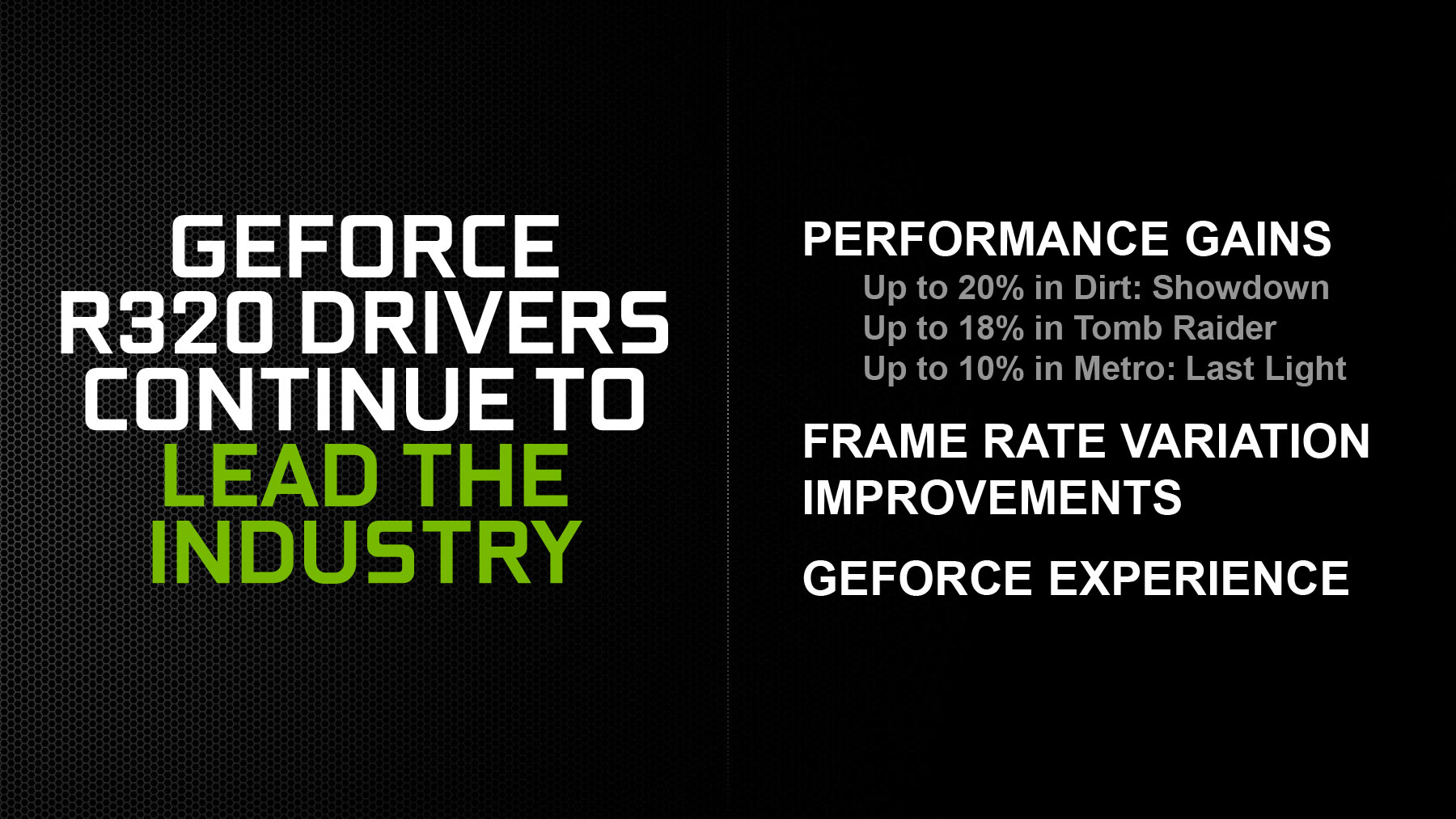 With the public release of the 320 driver series NVIDIA has added some more performance boosts in games like Dirt: Showdown and Tomb Raider (both AMD Gaming Evolved titles) while also increase exposure of the GeForce Experience and improving even single GPU frame time variations. 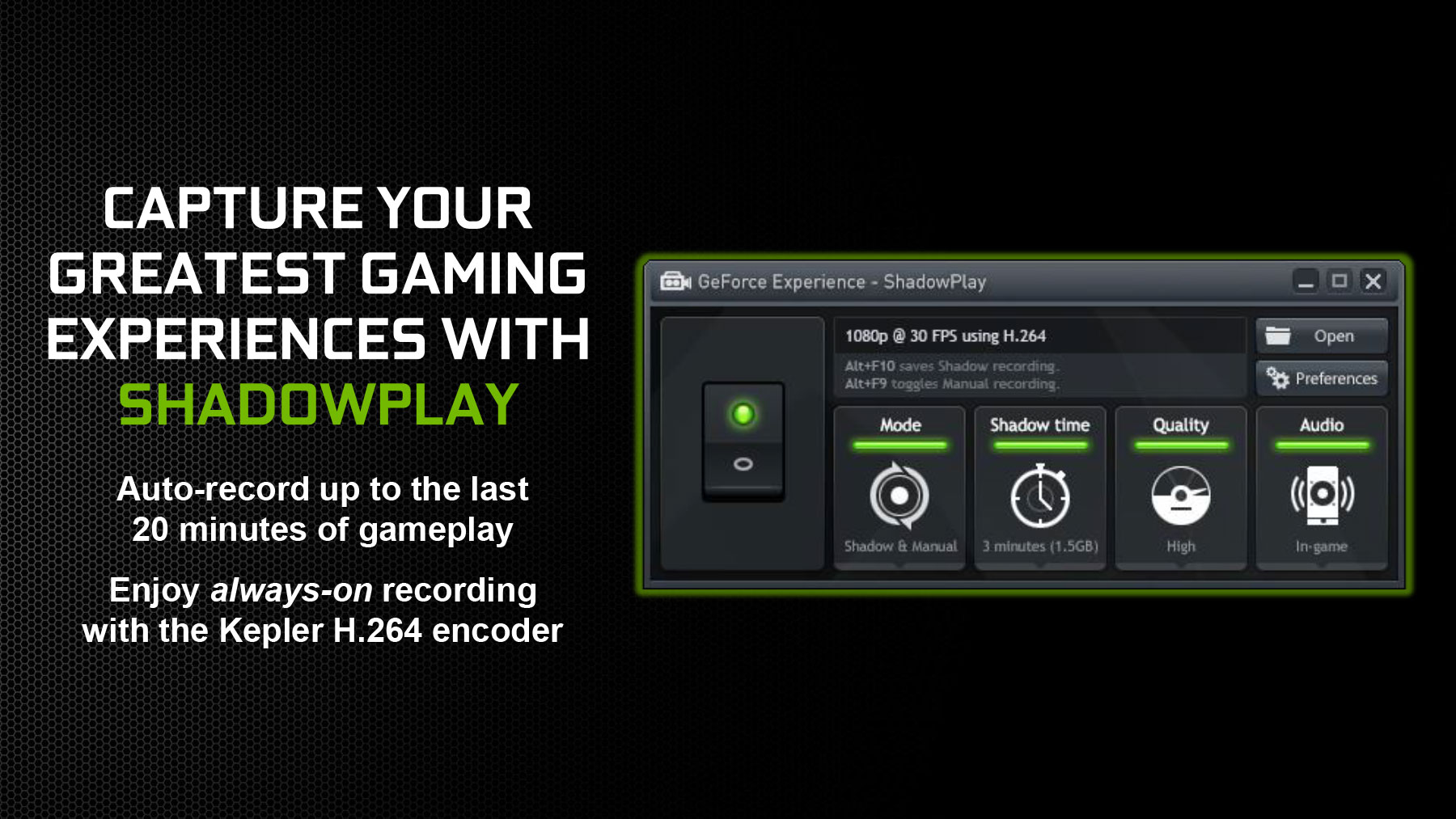 New to the GFE application with this release (upcoming) is a feature called "ShadowPlay" that will perform real-time hardware accelerated capture of your game play sessions using the GPU-based H.264 encoder.  This is will be high quality footage and it will have as much as a 20 minute buffer on it so you can catch any awesome events without having to predict them!  This is a pretty kick ass feature and will likely promote a lot of YouTube based video sharing – though more integration with a service like Twitch.tv would be cool too. 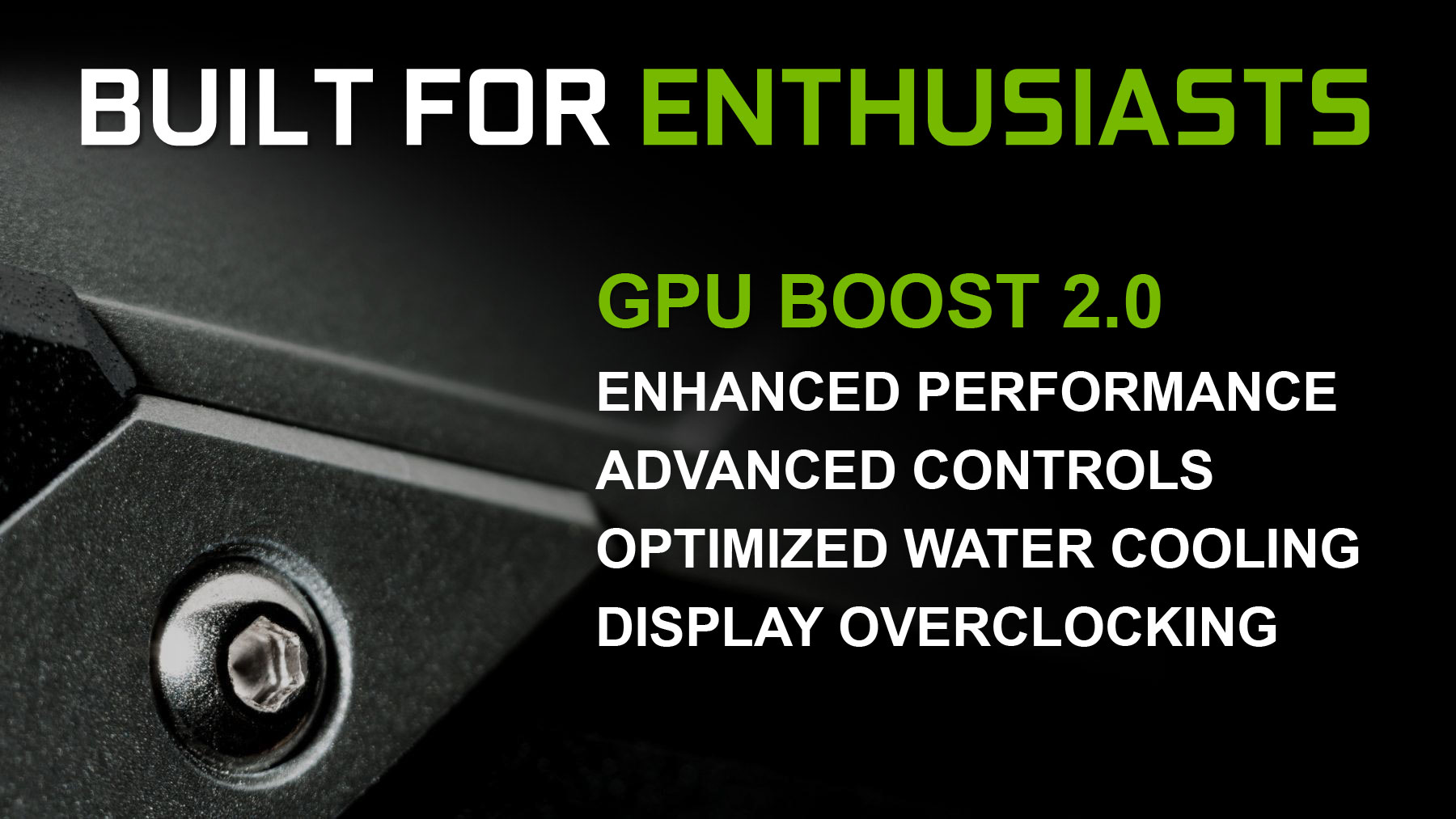 Just as we saw with the GTX Titan, GPU Boost gets some additional functionality and flexibility with the GTX 780.  This includes better overvolting, display overclocking and higher clocks.  They have even enabled a new option for software like Precision X to give you "fail states" for overclocking with GPU Boost 2.0.  When you are hitting a voltage limit, you will get an indicator that tells you that is the bottleneck of performance, allowing you to adjust the setting if you can to get more performance.  Then if power is the bottleneck, you can adjust the sliders as necessary; all in an attempt to get the highest clocks for your GPU. 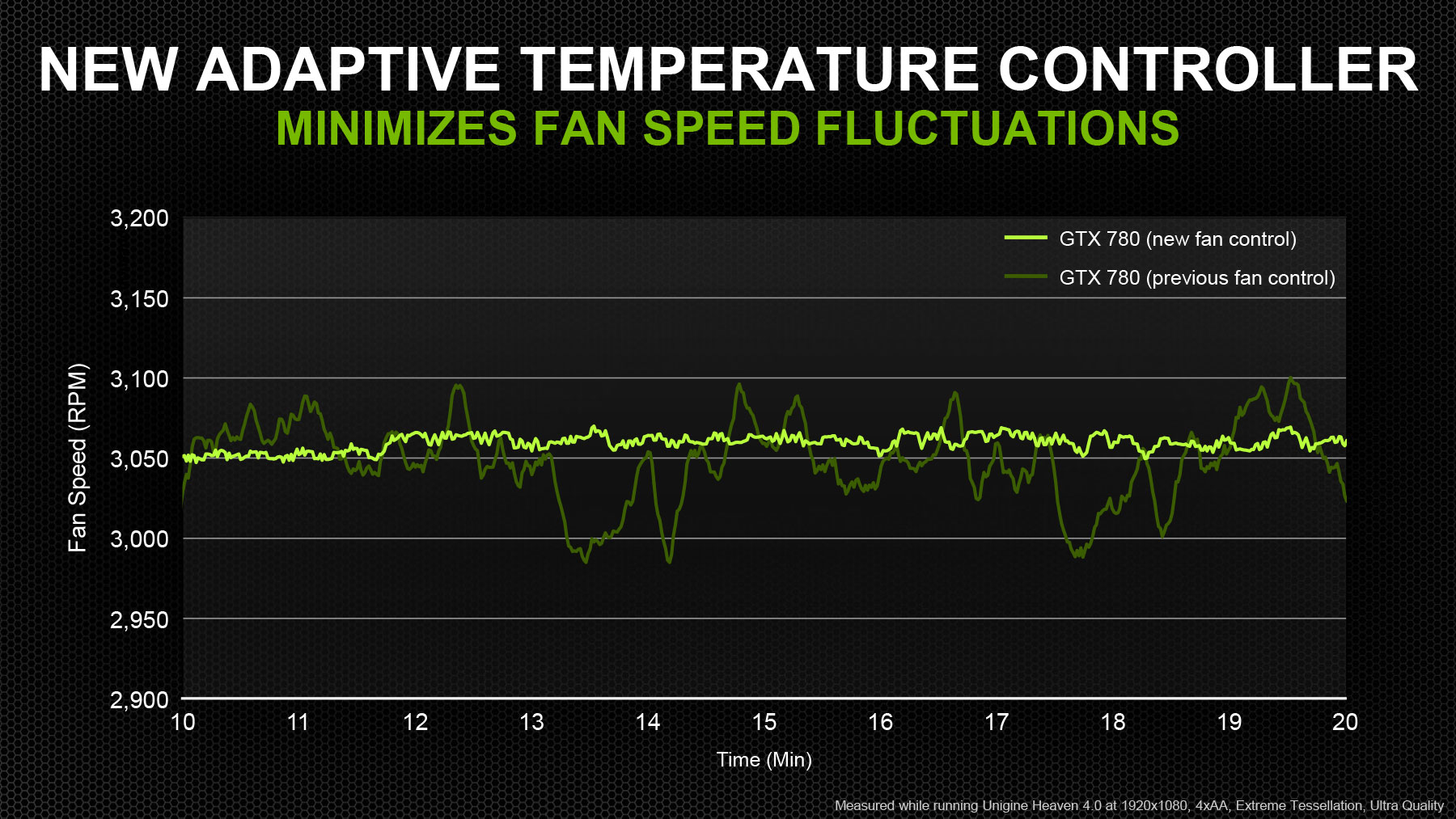 With this release NVIDIA is also reworking its fan controller to be more "even toned" in regards to the fan speeds.  This will prevent some of the oscillation sound effects you might hear (whirr, whirr) during changing load patterns in games.

The GeForce GTX 780 shares the same design as the GTX Titan and the GTX 690 before it – a clean silver and black design with the only accent in color the green of the GeForce GTX logo up top.  I was a fan of the design originally and I continue to be impressed by it today.

Speaking of fans, the GTX 780 is also sporting the same style cooler that the GTX Titan which means QUIET operation – a big plus for NVIDIA over AMD on these recent reference releases. 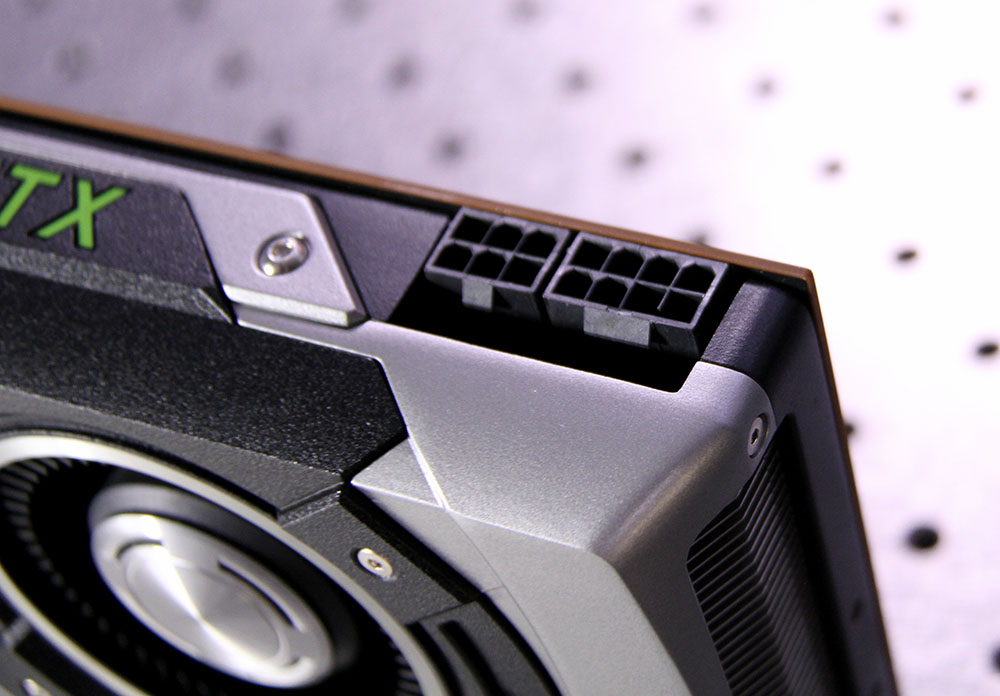 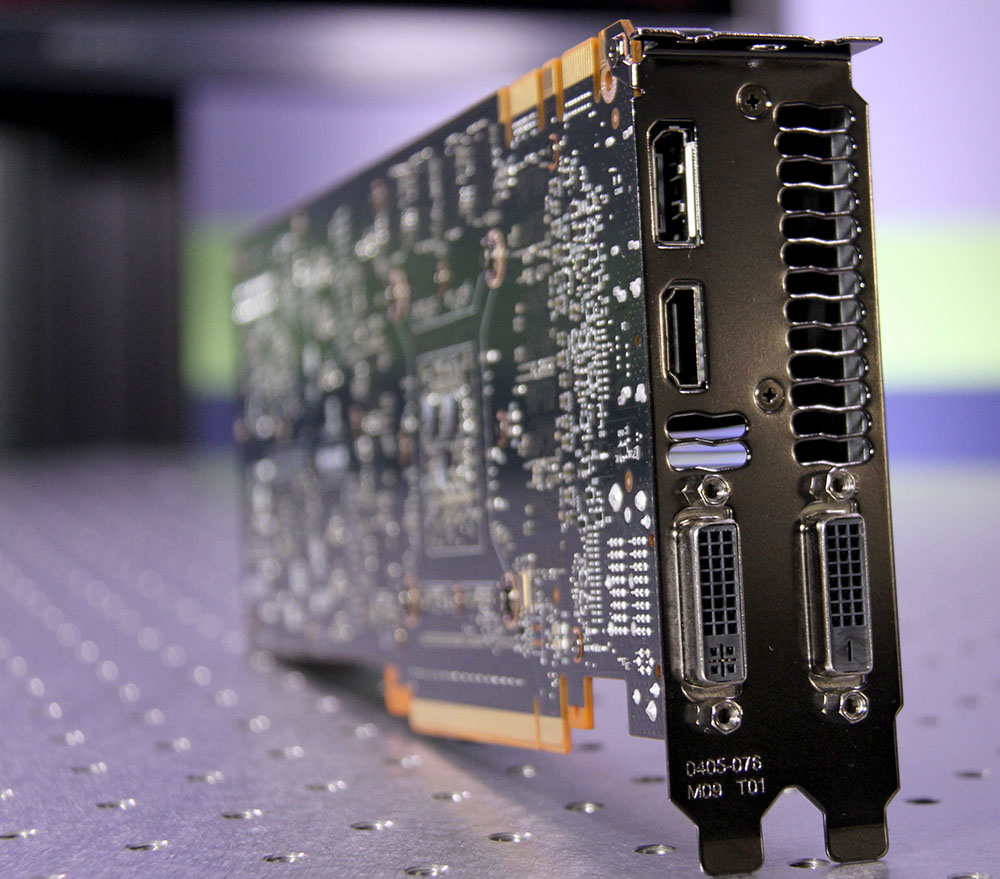 External connections remain the same as well: a pair of dual-link DVI connections, one full size HDMI port and a standard DisplayPort…port. 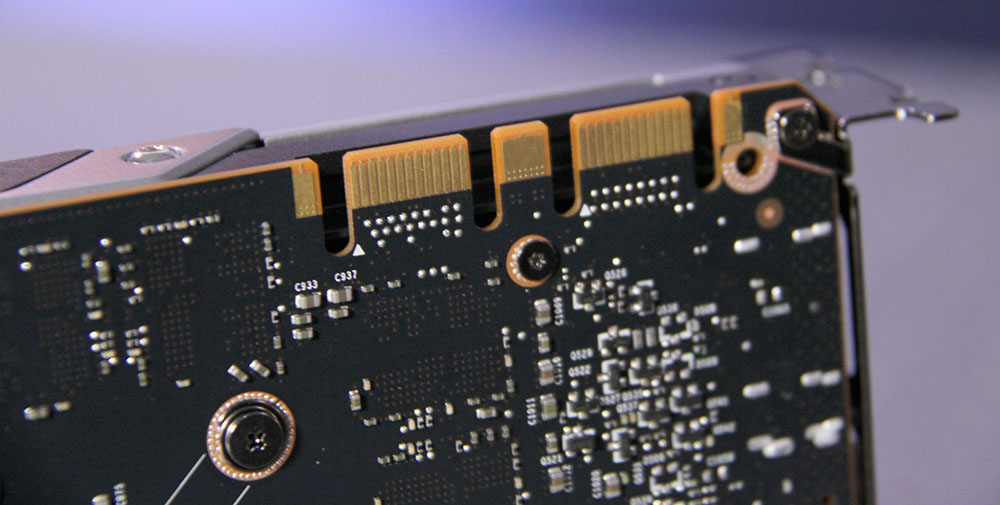 SLI is supported with up to three GPUs – don't believe reports of quad SLI options!

The GeForce GTX logo up to is LED backlit and is controllable via a few not-so-great pieces of software.  If you want pulsing GPUs, NVIDIA is the way to go!