Our first thoughts and impressions

We got in our Oculus Rift VR developer kit and we walk you through our first impressions!

Since first hearing about the Kickstarter project that raised nearly 2.5 million dollars from over 9,500 contributors, I have eagerly been awaiting the arrival of my Oculus Rift development kit.  Not because I plan on quitting the hardware review business to start working on a new 3D, VR-ready gaming project but just because as a technology enthusiast I need to see the new, fun gadgets and what they might mean for the future of gaming.

I have read other user's accounts of their time with the Oculus Rift, including a great write up in a Q&A form Ben Kuchera over at Penny Arcade Report, but I needed my own hands-on time with the consumer-oriented VR (virtual reality) product.  Having tried it for very short periods of time at both Quakecon 2012 and CES 2013 (less than 5 minutes) I wanted to see how it performed and more importantly, how my body reacted to it.

I don't consider myself a person that gets motion sick.  Really, I don't.  I fly all the time, sit in the back of busses, ride roller coasters, watch 3D movies and play fast-paced PC games on large screens.  The only instances I tend to get any kind of unease with motion is on what I call "roundy-round" rides, the kind that simply go in circles over and over.  Think about something like this, The Scrambler, or the Teacups at Disney World.  How would I react to time with the Oculus Rift, this was my biggest fear…

For now I don't want to get into the politics of the Rift, how John Carmack was initially a huge proponent of the project then backed off on how close we might be the higher-quality consumer version of the device.  We'll cover those aspects in a future story.  For now I only had time for some first impressions.

Watch the video above for a walk through of the development kit as well as some of the demos, as best can be demonstrated in a 2D plane! 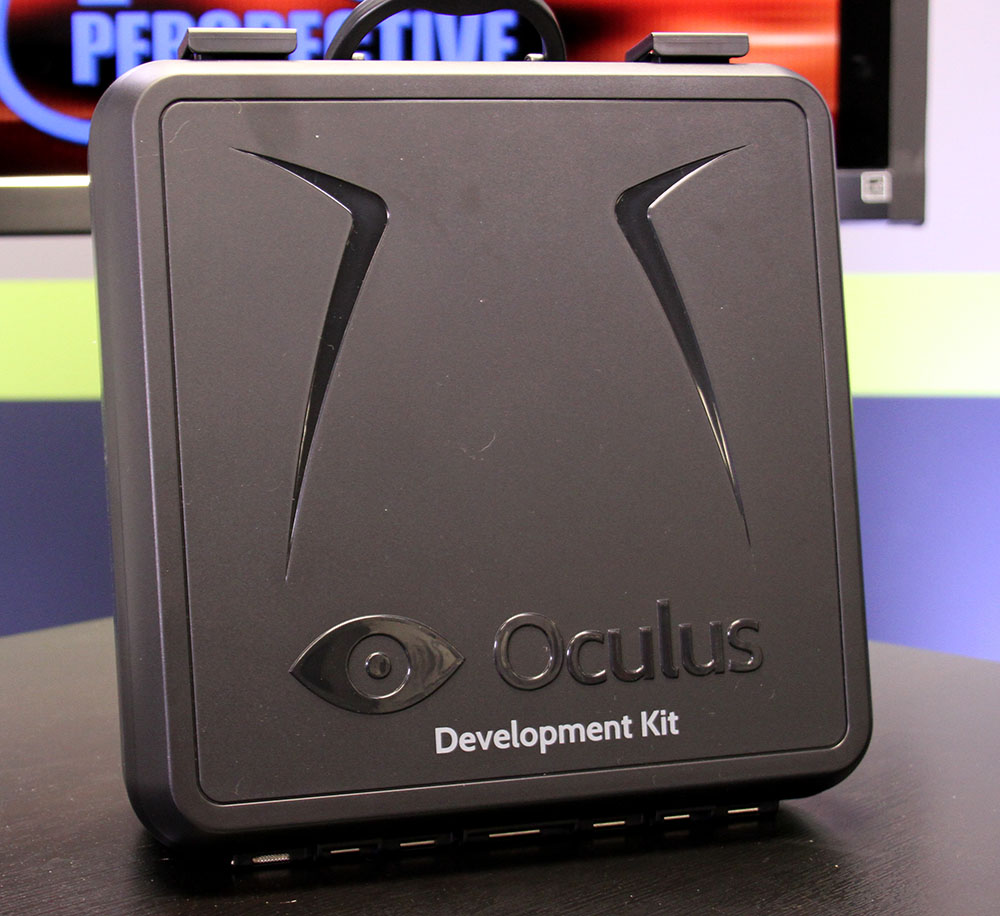 All of the contents come in a plastic case with handle for portability. 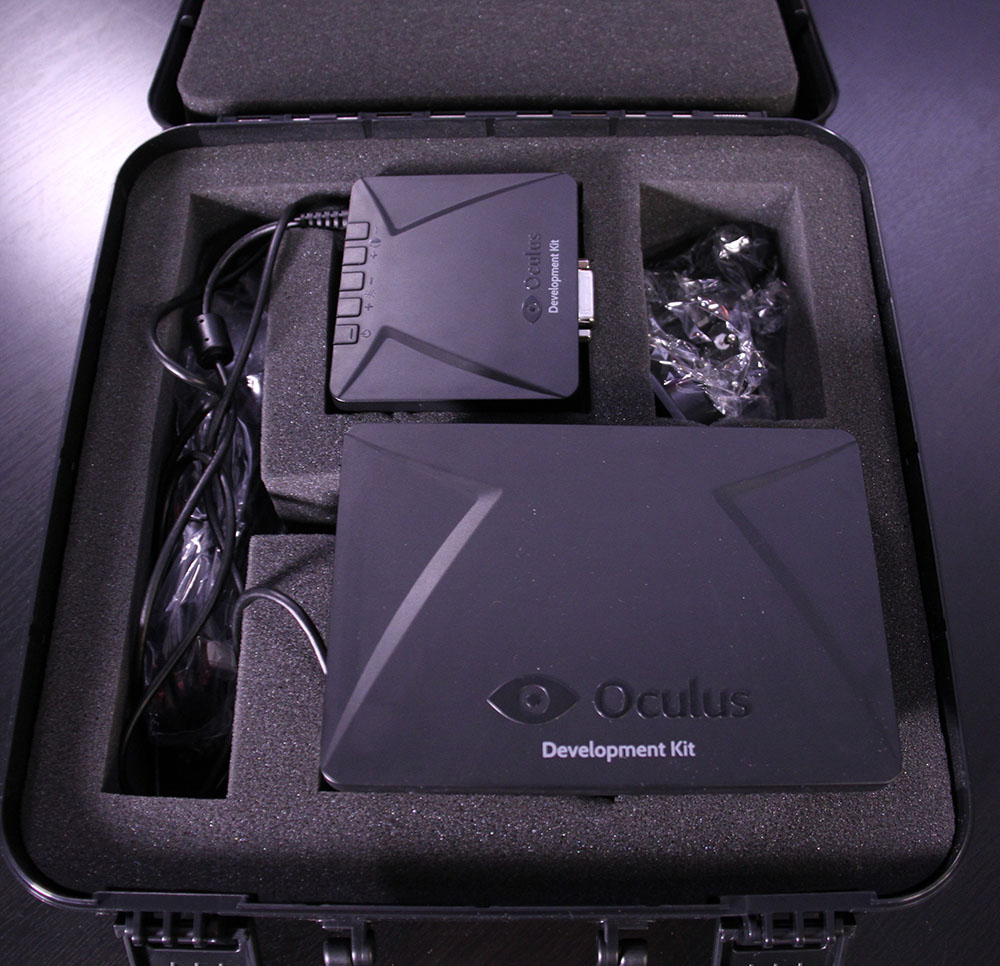 The inside is packed with foam and the headset, control box, lenses and accessories. 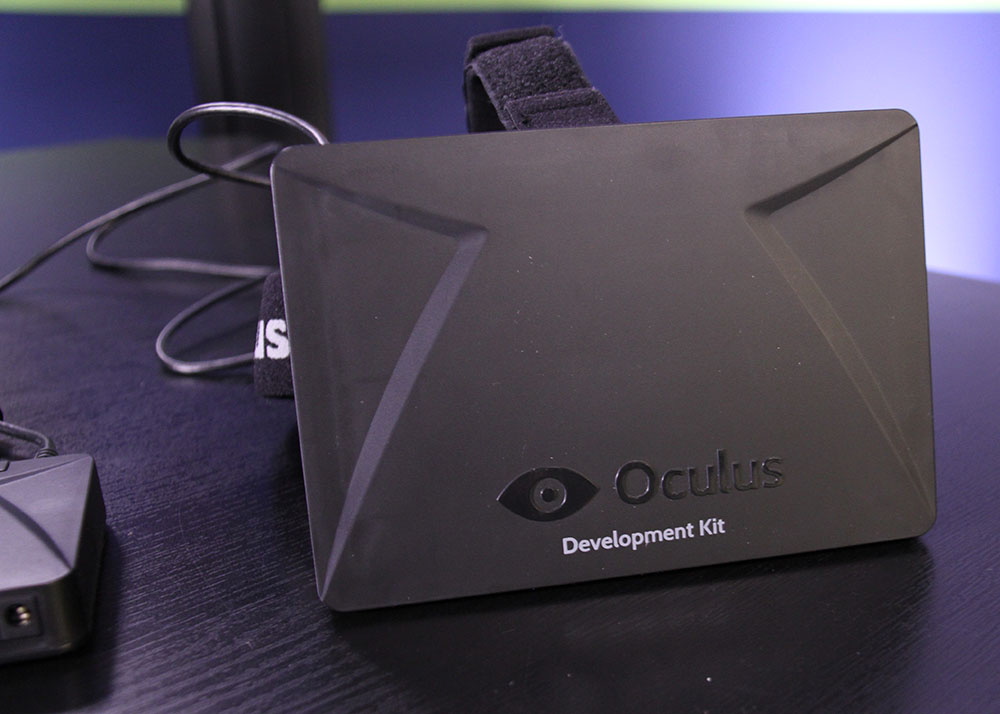 Looking at the front of the goggles, nothing has really changed since the demo we saw at CES in January.  The design doesn't quite match the original Kickstarter imagery but you are going to look like a dork wearing this no matter what style it had.  The unit is light though and the strap that goes over your head basically removes the weight and leaves a very balanced feel. 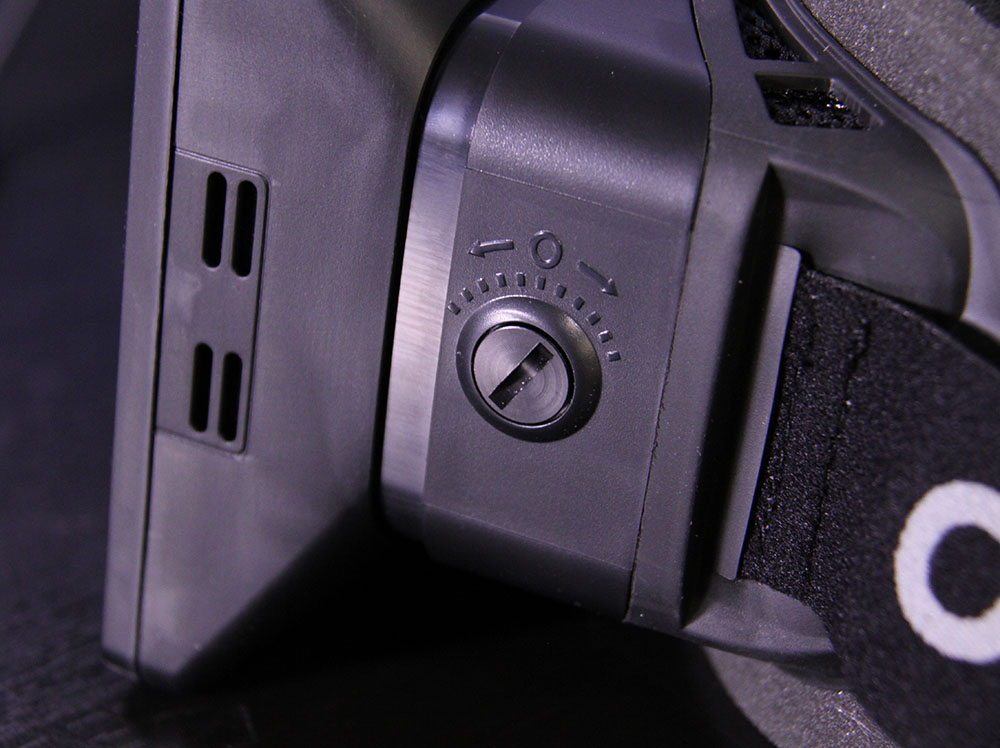 Each side of the goggles has a dial to move the lenses closer to further from your eyes, depending on your face shape and if you are trying to wear glasses. 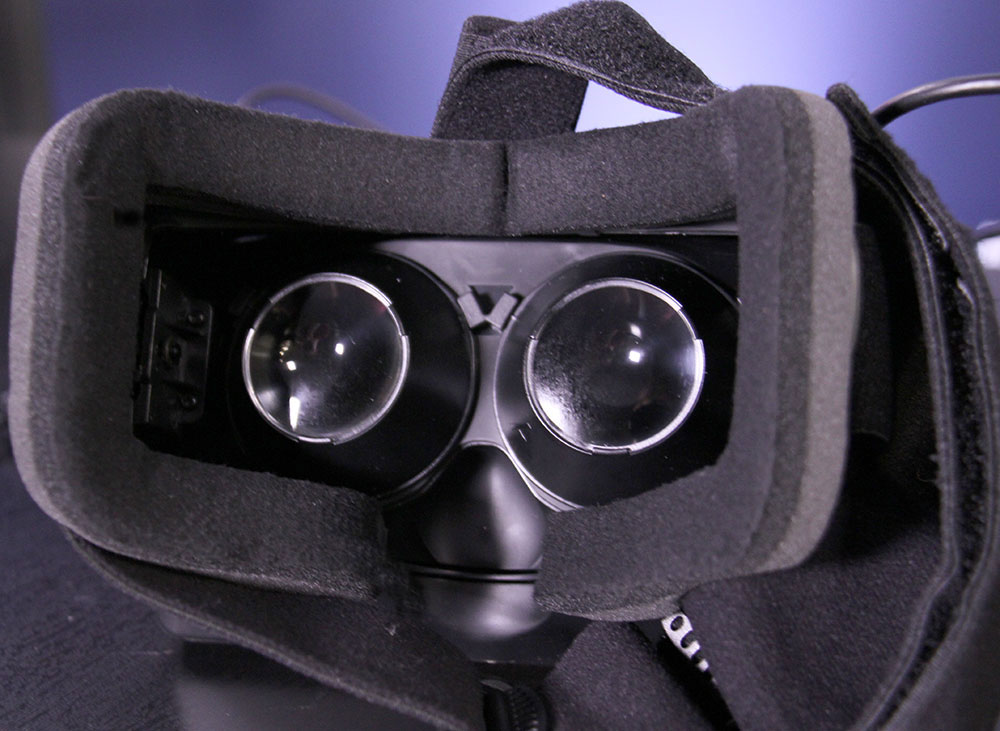 Here is what the inside of the goggles looks like – two separate lenses that each bring a 640×800 image to you and your peripheral vision.  The idea is to completely encompass your sight so that you truly feel immersed in the content and I have to say that was 100% the case in my usage. 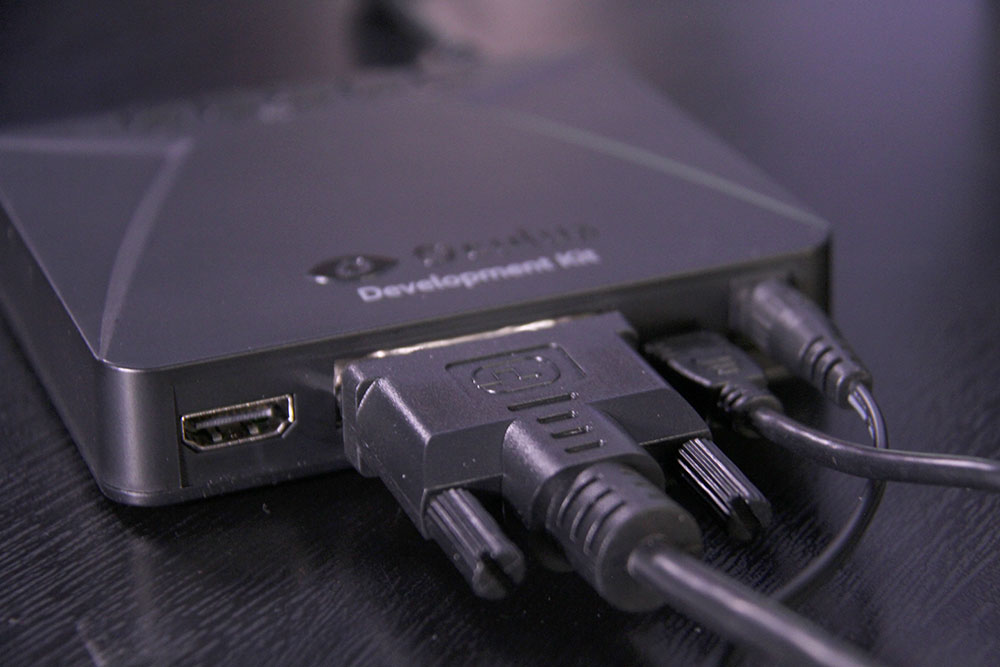 Connected to the headset is the control box, the device that takes the signal from your PC and splits it up.  There are DVI and HDMI inputs, though only one can be connected at a time.  A mini-USB port is required for communication from the Oculus Rift on-board sensors to be transmitted back to the game engine.  Also, the power connection here pushes power to the display inside the goggles.

The only drawback I see to this initial setup is that you are tethered to the PC and the length of the DVI/HDMI cable to this control box is going to be a limiting factor in some cases.  Maybe one day we'll have wireless options that can be completely free of latency and disconnect us from the PC. 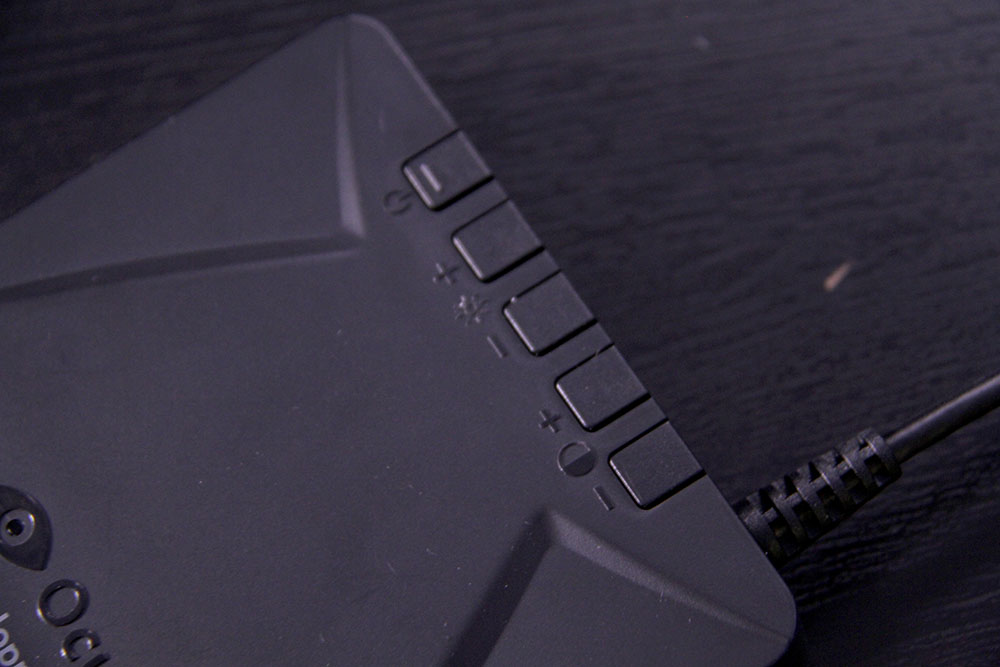 There are controls for power, brightness and contrast on the top of the control box. 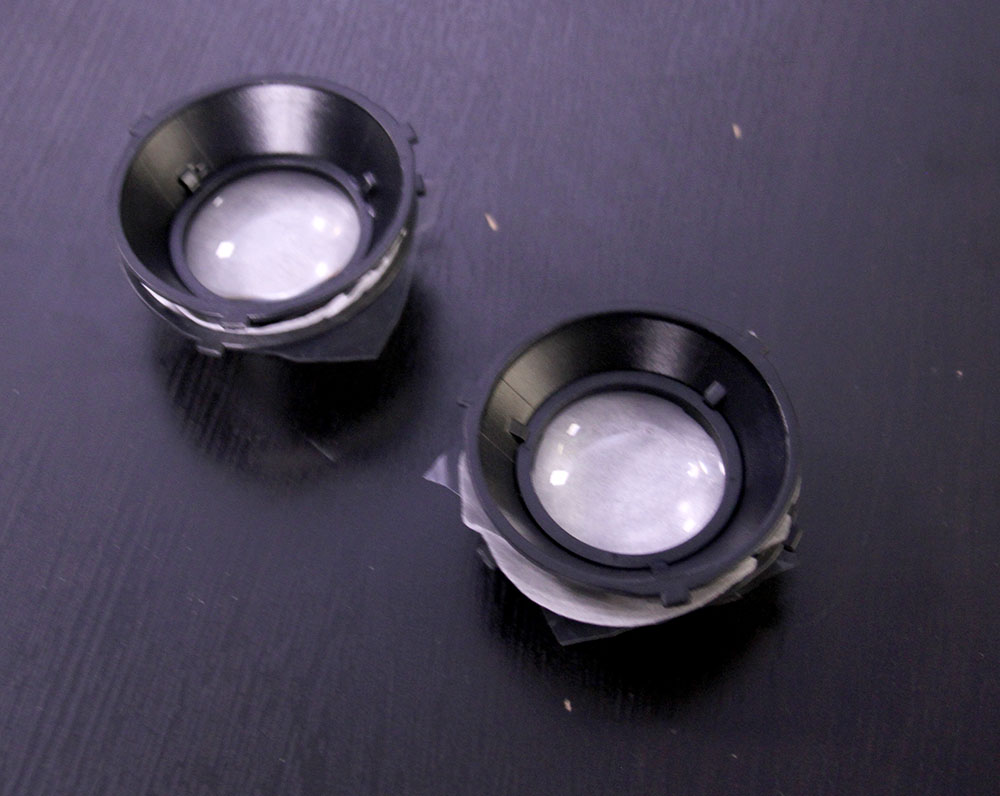 Finally, other than the DVI/HDMI/USB cables included in the kit, there are replacement lenses for far-sighted and near-sighted users to try if they don't want to wear corrective lenses.  If you wear contacts though the pre-installed lenses meant for 20/20 vision will work just fine and that is what we went with in our initial testing.

So how did it all turn out?  The technology is still incredibly impressive and I was amazed at how easy the setup, installation and demos were to run.  The Tuscany demo provided by Oculus is very minimal but downloading the Unreal SDK and editing a single INI file resulted in several impressive demos like the ones we showed in our YouTube video above.  Head tracking works well, the latency *seems* to be pretty good to me, but this is really the only experience I have with recent VR products.

I will say that the low resolution is definitely a barrier for me.  Each eye is only seeing a 640×800 resolution in this version of the kit and that close up you can definitely see each pixel.  Even worse, this creates a screen door effect that is basically like looking through a window with a screen installed.  It's not great but you could get used to it if you had to; I am just hoping the higher resolution version of this kit is closer.

The bad news is that after just a few minutes of use I definitely felt the effects of motion sickness.  This was most apparent when I was playing the faster UT3-style map while trying to aim and move at the same time, often in different directions.  Ken noticed the same problem in his time with the Oculus Rift.  There are many theories on what might fix it including even lower latency head tracking and higher resolution images but nothing has been proven yet.  It was also suggested that I just stop being such a girl about it.

Seriously though, this is a major problem not just for me but for VR enthusiasts.  How much of the population with have these same problems and how many will be completely comfortable using the Rift?  I think as more and more of the kits from the Kickstarter ship we'll get a better picture.

Personally, I am going to continue working with the Rift in hopes of being able to overcome the effect by brute force.  Don't worry, I'll keep the garbage can nearby just in case. 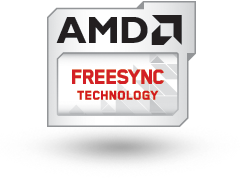 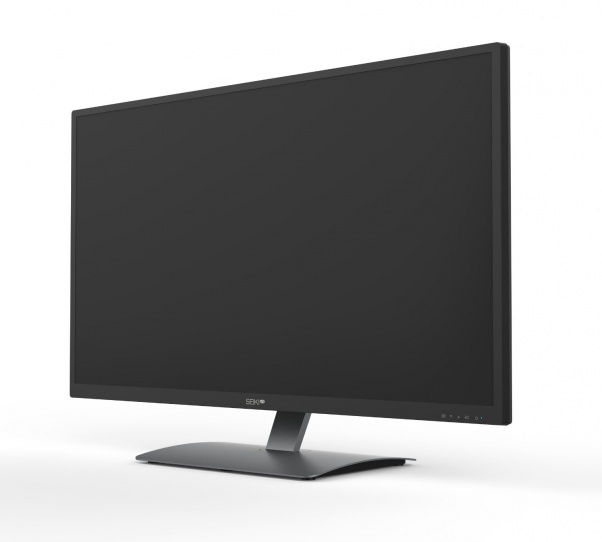 Seiki and PC Perspective Are Giving Away a Pair of SM40UNP 40-in 4K 60 Hz Monitors! 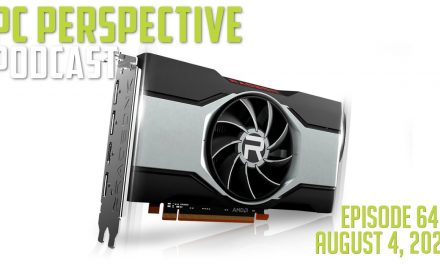