ASUS wants to kick off Computex with a barrage of product announcements. Seriously, there were 6 products announced in the span of 20 minutes with no two product from the same category. Devices range from tablets and convertibles to routers and mice.

The company started off with the new Transformer Pad Infinity. This updates their line of separable hybrid laptop/tablets with NVIDIA Tegra 4.

Up next was the FonePad Note. A page from Samsung's playbook, both in name and in functionality, the FonePad is a 6" phone with a stylus pen. Coming off our recent Samsung Galaxy Tab 3 10.1 story, this device will also be powered by an Intel Atom Z2560 SoC. These could be the start of many high-profile design wins for Intel.

We briefly leave mobile devices to head towards a desktop computer. The VivoPC is designed to be easily upgraded, "Just lift the lid and replace the harddrive and memory". This is being positioned as a home theater PC running Windows 8. We currently have no further specifications.

And of course, with the discussion of an 802.11ac device we clearly need to move on to routers. The ASUS Router RT-AC68U, while a slight bit literal of a name, is supposedly the first dual-band 802.11ac Router. I am not exactly sure what the second band would be, but I am only the messenger. Regardless, this router is apparently capable of performance up to 1.9 Gigabits per second.

And then we cannot have all of these HTPC devices without an input method, can we? Enter the ASUS VivoMouse. This device allows you to more comfortably control your PC from your couch, as far as I can tell. 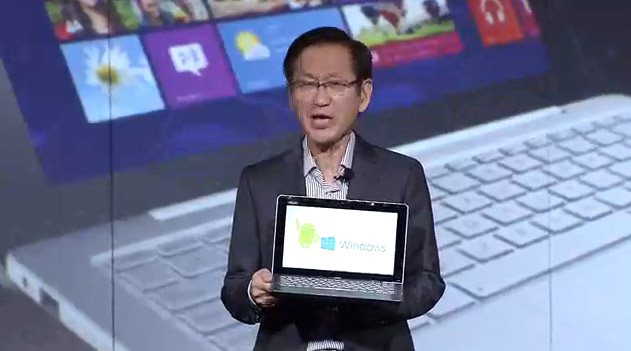 Last, but with a bang, ASUS announced the Transformer Book Trio. As you can guess, the Trio name comes from its three form factors being wrapped up into a single product: it's a notebook, a tablet, and a desktop PC. Do not worry, I will not make an iPhone announcement keynote joke; that one has already been well overplayed.

The trick is that the Trio is actually two fully functional computers with one running Android and the other Window 8. Both devices are powered by an x86 Intel-based processor, however: the main PC runs a Core i7-4500U processor and the tablet runs an Atom Z2580.

A main selling feature is that, when base is separated from screen, both devices are simultaneously useable. If you attach the base to an external monitor it will function like a desktop PC.

Well, that's it. We will probably have a bit more analysis coming up soon. But, for now, I need to get off of Taipei time.

Someone put my keyboard on their game controller