Gigabyte launched its U21M convertible tablet at Computex this week. The Windows 8 PC is an 11.6” convertible notebook that is 20mm thick and weights approximately 3.28 pounds (or 3.06 lbs without HDD). It is powered by an Intel Haswell CPU with HD4000 processor graphics and it runs the full x86-64 version of Windows 8.

The notebook features a black and slate gray colored chassis that has a brushed metal texture over the top of the keyboard deck and display bezel. Design wise, it is reminiscent of Dell's Latitude XT series with more curves. The U21M uses a similar center 180-degree hinge that allows the display to be rotated around and then laid flat against the keyboard to enable tablet mode. There are no face function buttons on the display bezel aside from the Windows key, however.

Gigabyte has made ample use of the 11.6” form factor by designing a keyboard that stretches from one side of the system to the other. The six-row keyboard looks to be well laid out with good spacing between the keys and no real key placement oddities. key travel may be an issue though as the keys are close to the metal, as it were.  Below the keyboard is a large touchpad with hardware mouse buttons.

The display itself is an 11.6” capacitive touchscreen with a resolution of 1366 x 768. There does not appear to be digitizer/stylus support on the U21M, however. Above the touchscreen is a 1.3MP webcam. It also features two 1.5W speakers.

Internally, the U21M does not disappoint, with an Intel Haswell CPU, up to 8GB of DDR3 memory, and either a 128GB or 256GB mSATA SSD plus an optional mechanical hard drive up to 1TB. There is no discrete GPU, however. The system will rely on the Haswell CPU's processor graphics, though Gigabyte has not announced specific chips so the iGPU used is unknown. Wireless connectivity options include 802.11b/g/n Wi-Fi, Bluetooth 4.0 + LE, and a built-in 3.5G radio. The system uses a respectable 7.4V, 40Wh Lithium-Polymer battery. 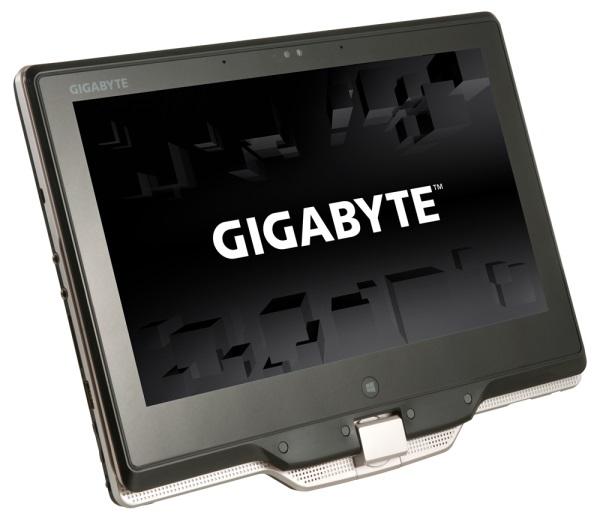 Gigabyte has not yet released pricing or availability dates, but you can find all the specifications along with additional photos on this product page.

My thought on this system is that it might be a good upgrade once my Dell Latitude XT finally dies on me (heh). It should definitely be faster and get much better battery life than my current convertible tablet, that's for sure! I'll be on the lookout for reviews, but what do you think about the U21M so far? If only it came in blue…