Getting even more life from GK104

Yes, you read that right, another GK104 graphics card! What does NVIDIA have for you for $250?

Have you guys heard about this new GPU from NVIDIA?  It’s called GK104 and it turns out that the damn thing is found yet another graphics card this year – the new GeForce GTX 760.  Yup, you read that right, what NVIDIA is saying is the last update to the GeForce lineup through Fall 2013 is going to be based on the same GK104 design that we have previously discussed in reviews of the GTX 680, GTX 670, GTX 660 Ti, GTX 690 and more recently, the GTX 770. This isn’t a bad thing though!  GK104 has done a fantastic job in every field and market segment that NVIDIA has tossed it into with solid performance and even better performance per watt than the competition.  It does mean however that talking up the architecture is kind of mind numbing at this point… 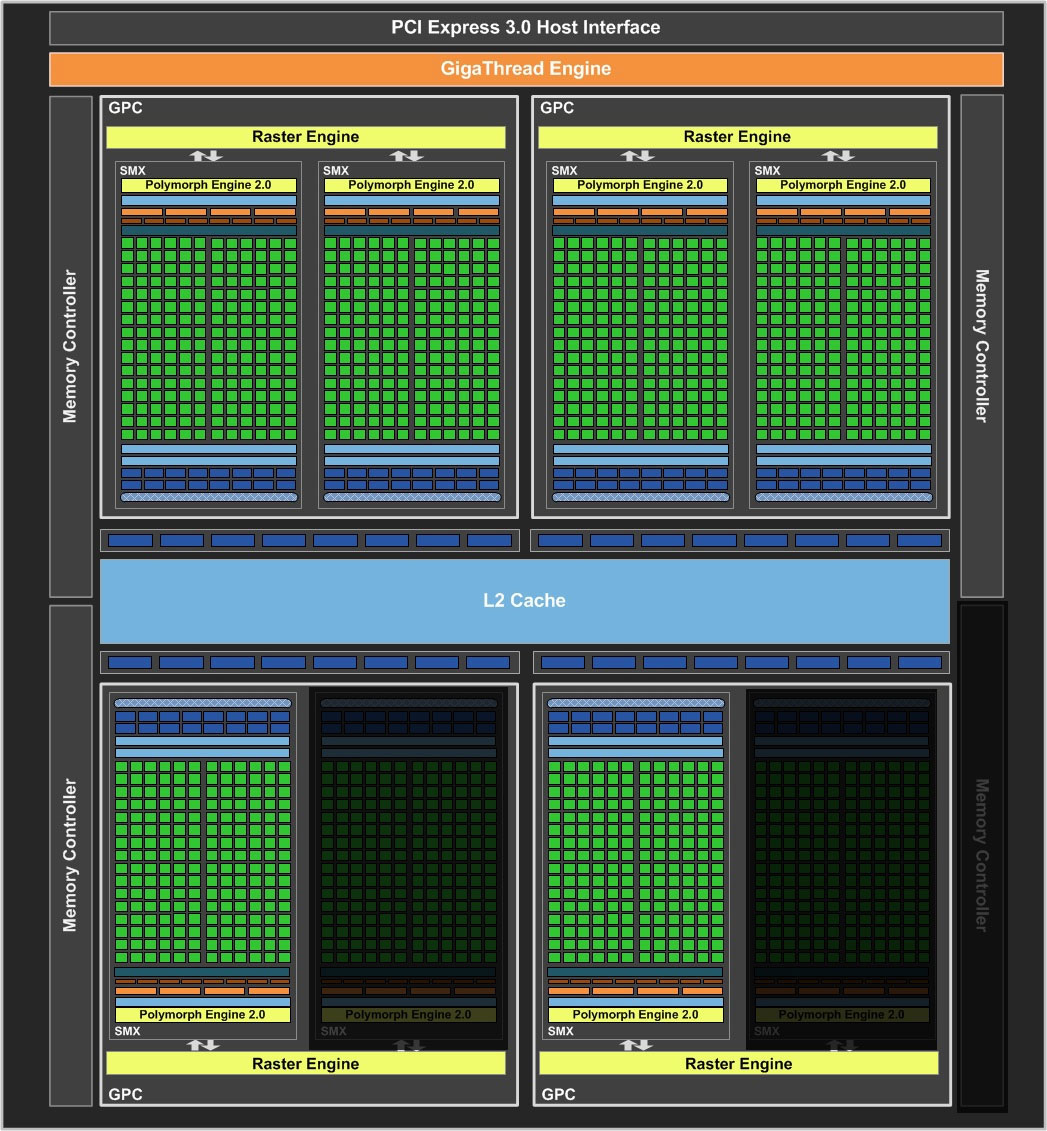 If you are curious about the Kepler graphics architecture and the GK104 in particular, I’m not going to stop you from going back and reading over my initial review of the GTX 680 from January of 2012.  The new GTX 760 takes the same GPU, adds a new and improved version of GPU Boost (the same we saw in the GTX 770) and lowers down the specifications a bit to enable NVIDIA to hit a new price point.  The GTX 760 will be replacing the GTX 660 Ti – that card will be falling into the ether but the GTX 660 will remain, as will everything below it including the GTX 650 Ti Boost, 650 Ti and plain old 650.  The GTX 670 went the way of the dodo with the release of the GTX 770. 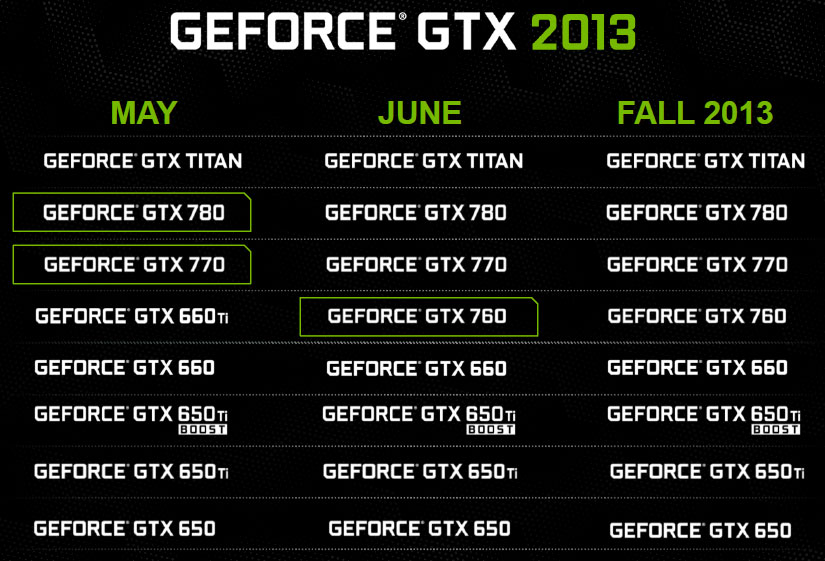 Even though the GTX 690 isn't on this list, NVIDIA says it isn't EOL

As for the GeForce GTX 760 it will ship with 1152 CUDA cores running at a base clock of 980 MHz and a typical boost clock of 1033 MHz.  The memory speed remains at 6.0 GHz on a 256-bit memory bus and you can expect to find both 2GB and 4GB frame buffer options from retail partners upon launch.  The 1152 CUDA cores are broken up over 6 SMX units and that means you’ll see some parts with 3 GPCs and others with 4 – NVIDIA claims any performance delta between them will be negligible. 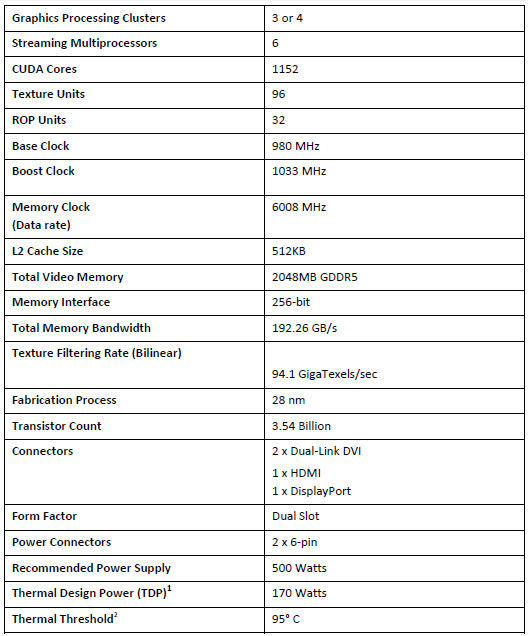 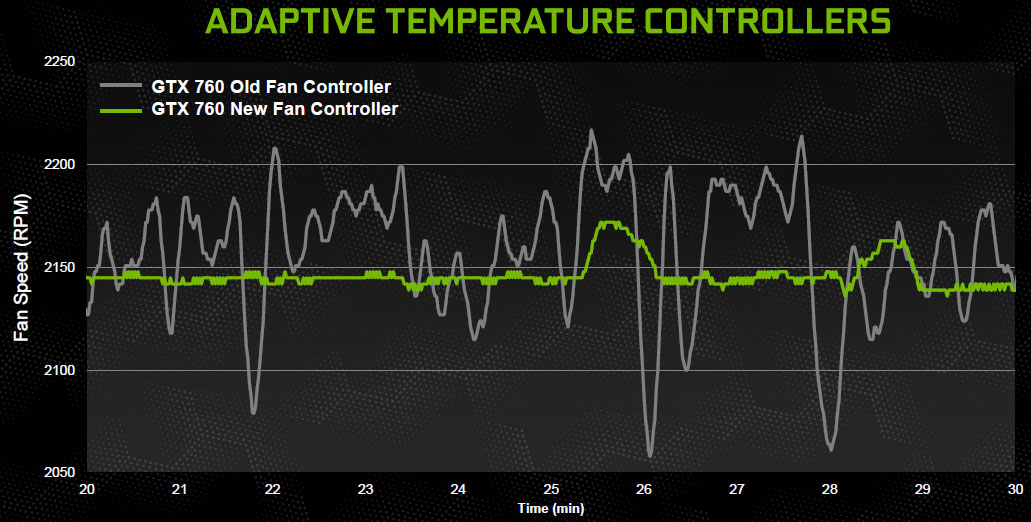 NVIDIA also continues to do work on its adaptive temperature controller that enables fans to adjust to temperature changes in a more gradual way to avoid the added noise disruption caused by constantly change fan speeds.

Just as was impressed on me during our meetings at E3, NVIDIA is definitely pushing the fact that they continue to work with developers despite the wins AMD has gotten in the console markets with the Xbox One and Playstation 4.  Games like Watch_Dogs and Batman: Arkham Origins look damn impressive and both will be using tessellation (which NVIDIA excels at compared to AMD’s current architecture) and NVIDIA’s custom AA option called TXAA.  The Witcher 3 actually implements PhysX support as well.

We’ll be the judge of that…

This obviously puts the GTX 760 in a very strong position and you’ll see why once our single and multi-card benchmarks are evaluated as well.  We always knew that even though I loved cards like the GTX Titan and the GTX 780, most buyers fall into the $200 price range for new GPUs and the GTX 760 might just be interesting enough to stretch that up to $250.