NVIDIA was on hand at E3 not only to talk about SHIELD but also make sure everyone knows that they are dedicated to the PC platform.

NVIDIA views the gaming landscape as a constantly shifting medium that starts with the PC.  But the company also sees mobile gaming, cloud gaming and even console gaming as part of the overall ecosystem.  But that is all tied together by an investment in content – the game developers and game publishers that make the games that we play on PCs, tablets, phones and consoles. 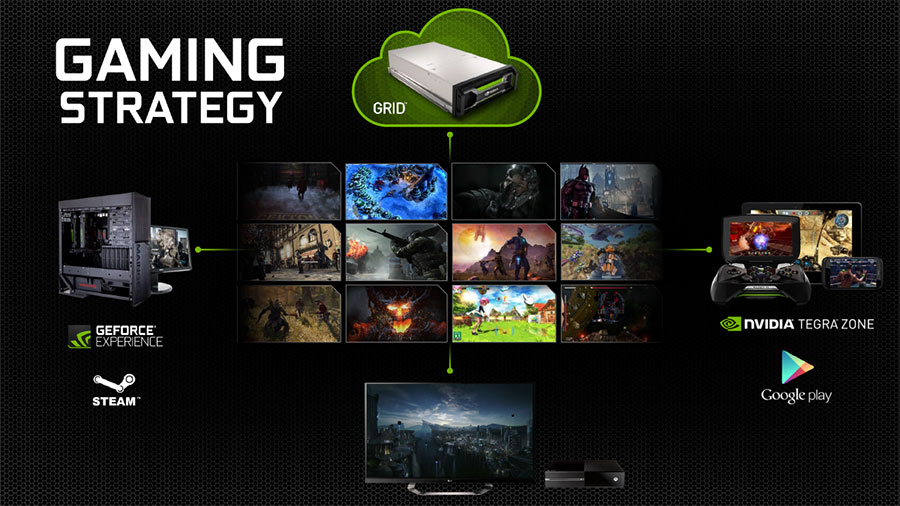 The slide above shows NVIDIA targeting for each segment – expect for consoles obviously.  NVIDIA GRID will address the cloud gaming infrastructure, GeForce and the GeForce Experience will continue with the PC systems and NVIDIA SHIELD and the Tegra SoC will get the focus for the mobile and tablet spaces.  I find it interesting that NVIDIA has specifically called out Steam under the PC – maybe a hint of the future for the upcoming Steam Box?

The primary point of focus for today’s press meeting was to talk about the commitment that NVIDIA has to the gaming world and to developers.  AMD has been talking up their 4-point attack on gaming that starts really with the dominance in the console markets.  But NVIDIA has been the leader in the PC world for many years and doesn’t see that changing. 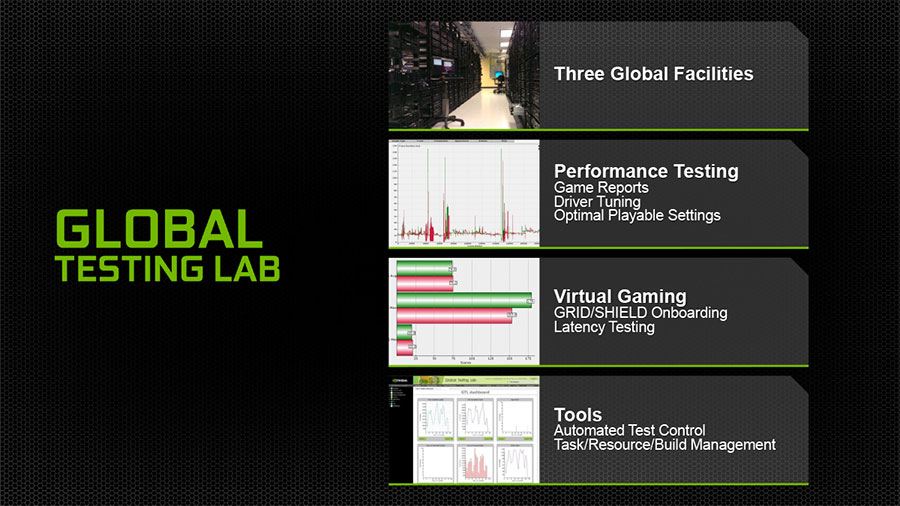 With several global testing facilities, the most impressive of which exists in Russia, NVIDIA tests more games, more hardware and more settings combinations than you can possibly imagine.  They tune drivers and find optimal playing settings for more than 100 games that are now wrapped up into the GeForce Experience software.  They write tools for developers to find software bottlenecks and test for game streaming latency (with the upcoming SHIELD). They invest more in those areas than any other hardware vendor. 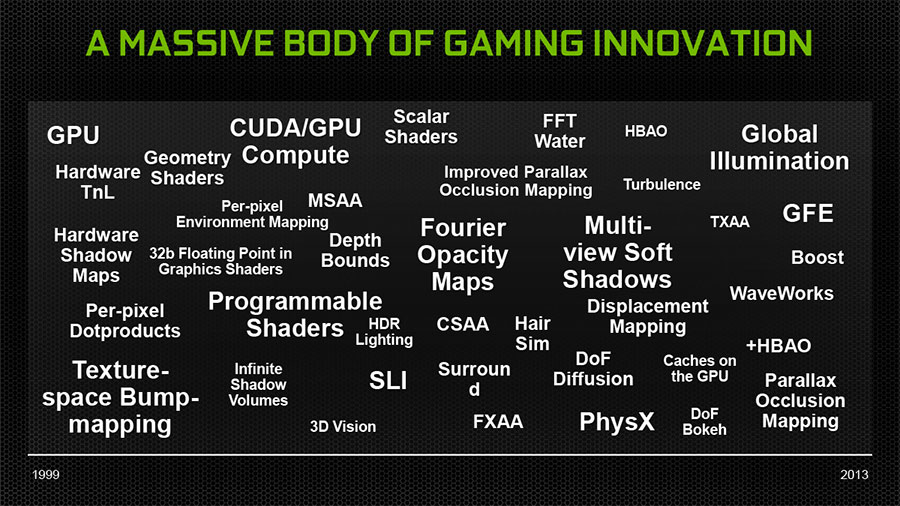 This is a list of technologies that NVIDIA claims they invented or developed – an impressive list that includes things like programmable shaders, GPU compute, Boost technology and more. 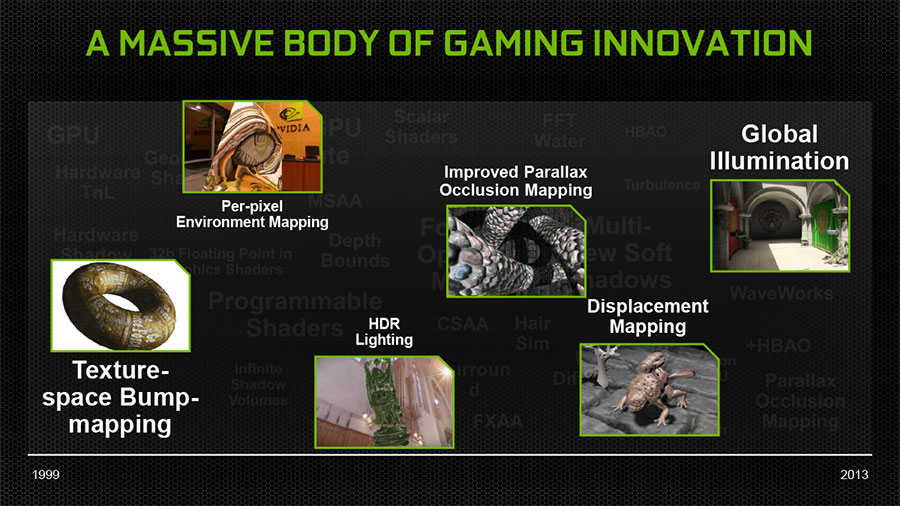 Many of these turned out to be very important in the development and advancement of gaming – not for PCs but for ALL gaming. 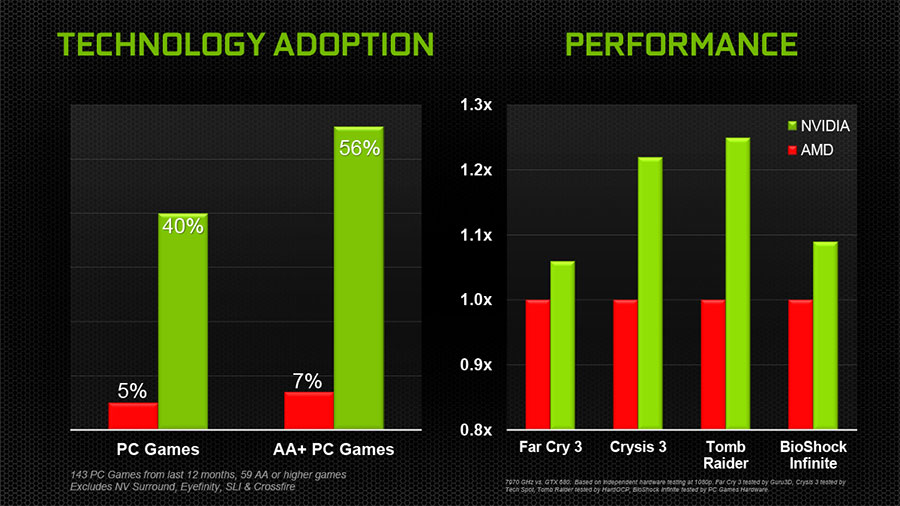 NVIDIA looked at 143 of the most recent PC games from the last 12 months and wanted to find out how much in-house developed technology was actually adopted in real-world titles.  The slide above shows what NVIDIA thinks is the result – a 40-56% adoption rate for NVIDIA technologies but a much smaller result for AMD.  Tony Tomasi, NVIDIA Senior VP of Content and Technology, did mention that they removed things like “multi-monitor” that didn’t “change the game” like FXAA and TressFX.  I would argue whole heartedly though that simply removing technologies like Eyefinity, the FIRST consumer multi-display PC gaming technology is a PR move and puts these results in question.

The right half of the slide tells us that NVIDIA sees that even with the games are in the AMD Gaming Evolved platform, they still have impressive performance.  Based on results from four different websites (one from each game) the GTX 680 is running faster than the HD 7970 GHz Edition on Far Cry 3, Crysis 3, Tomb Raider and Bioshock Infinite.  They aren’t showing what settings, what resolutions and what segments, but because these results are from third parties they can kind of skirt around the details. 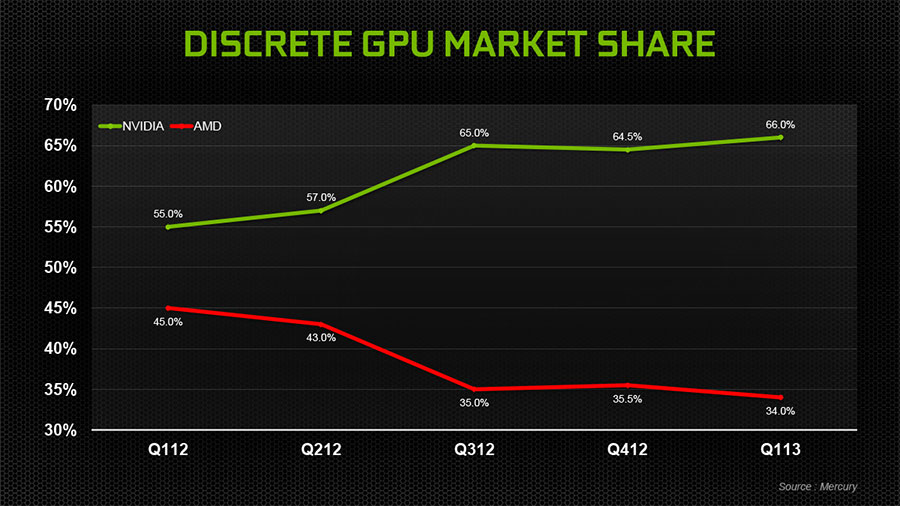 Along with technologies is market share – something that NVIDIA is proud of.  Despite the impressive push of the Radeon HD 7000 series of cards NVIDIA claims an increase in the discrete GPU market share at 66% today.  I’m not sure if this only counts only DESKTOP discrete graphics or if it might include mobile graphics as well – I’ll get more details soon.  UPDATE: NVIDIA did confirm that this slide was representative of both desktop and mobile discrete. 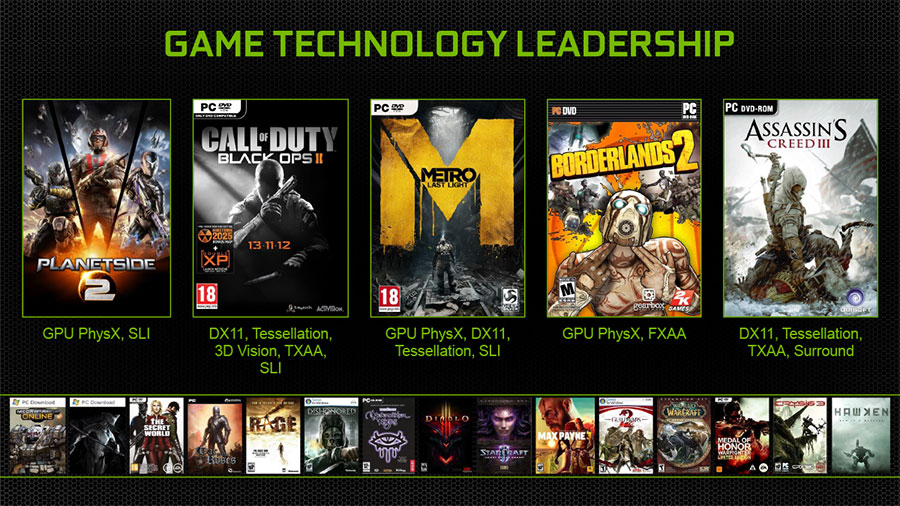 We have given NVIDIA a lot of flak in the past year or so about its lack of effort in game development.  AMD has seemingly dominated that field with games like Far Cry 3, Sleeping Dogs, Bioshock Infinite and many more.  Even taking the bundles out of the picture, AMD has been more active than it has ever been.  NVIDIA hasn’t been totally lame though, working with titles like Metro: Last Light, Borderlands 2 and Assassin’s Creed III.  Even with this slide in our face, it is hard not to see AMD as really grasping the gaming mantle for its own over the last 12 months. 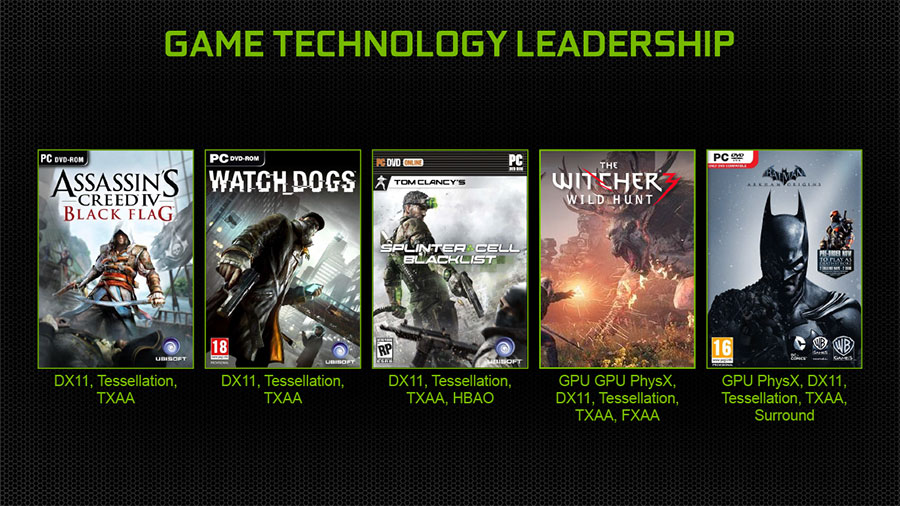 But maybe the future will change?  NVIDIA showed titles like Assassin’s Creed IV: Black Flag, Watch_Dogs, Splinter Cell: Blacklist, The Witcher 3 and the upcoming Batman: Arkham Origins as NVIDIA-sponsored and integrating NVIDIA technologies.  All five of them use DX11, tessellation and even TXAA – a highly efficient NVIDIA-only anti-aliasing technology. 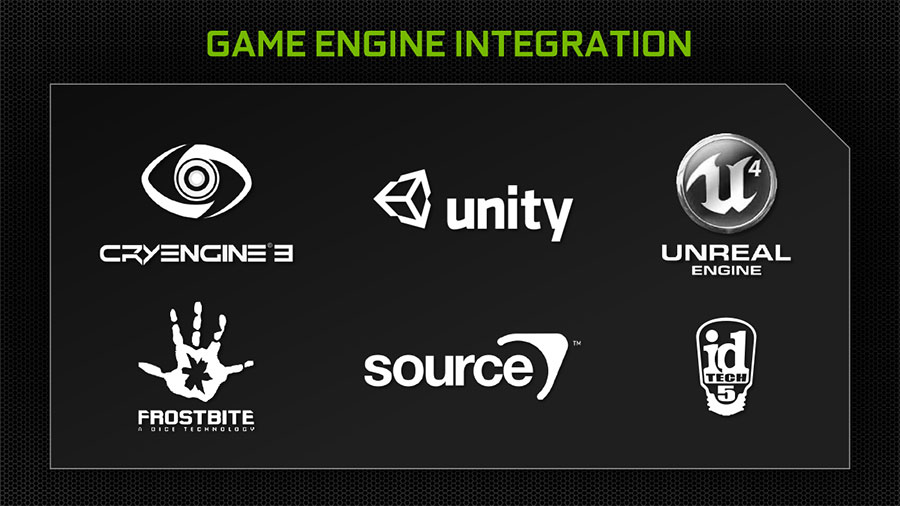 Another important factor NVIDIA is touting is integration of some of its core technology with engines like CryEngine 3, Unreal Engine 4, Frostbite and more.  This is incredibly important for NVIDIA as dominance in an engine will span multiple games throughout the technology generation.  Those engines are going to be targeting the new PS4 and Xbox One that obviously use AMD APUs.  NVIDIA will be working much harder in the future to maintain the same level of dominance in engine support. 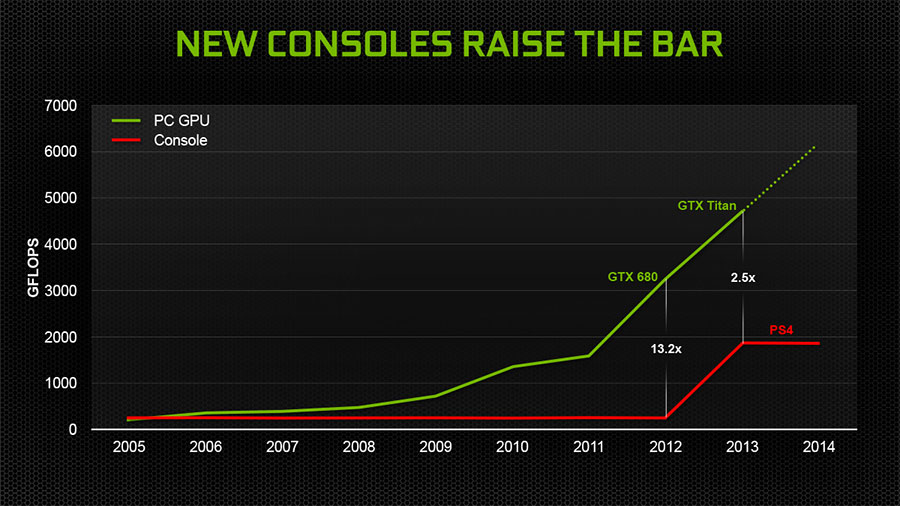 Even though NVIDIA isn’t in any of the new consoles, Tomasi thinks that this is good for NVIDIA in the long run.  The new consoles will step up the performance baseline of gaming going performance and decreasing that gap from 13x to something more manageable like 2.5x, games will ship to the PCs with more features and better performance.  Increasing that change is the move to the similar x86 architecture that the PC uses – though AMD will drastically benefit from being the core technology in the Xbox One and the Playstation 4, NVIDIA will benefit tangentially. 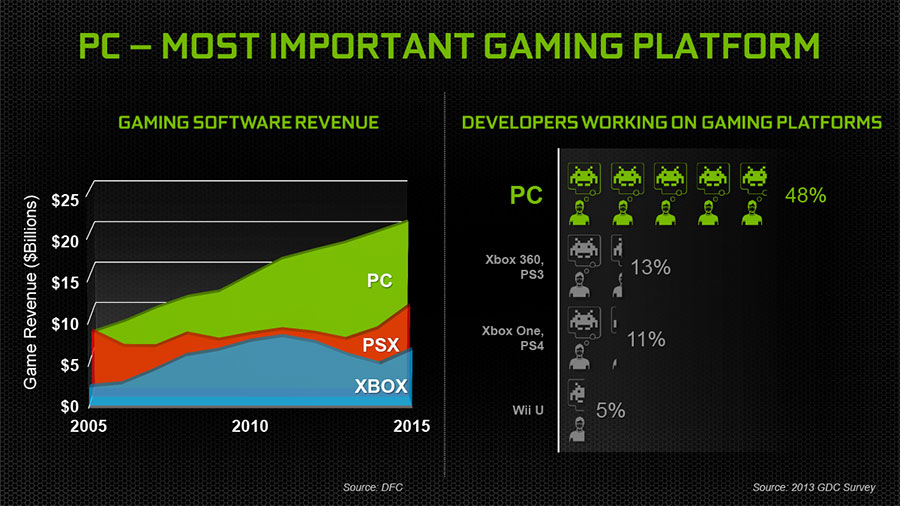 And because software developers like Epic are building games ON PCs and then publishing them on consoles, and they have been doing that for years, the higher performance PCs will benefit from the ability to easily translate from consoles to PC.

NVIDIA then cantered up quite a few game developers to talk to the press about their relationship with NVIDIA and how they are using NVIDIA technologies to improve gaming on the PC.  We got to see some game play from the upcoming Witcher 3 title as well as Assassin’s Creed IV and Splinter Cell. 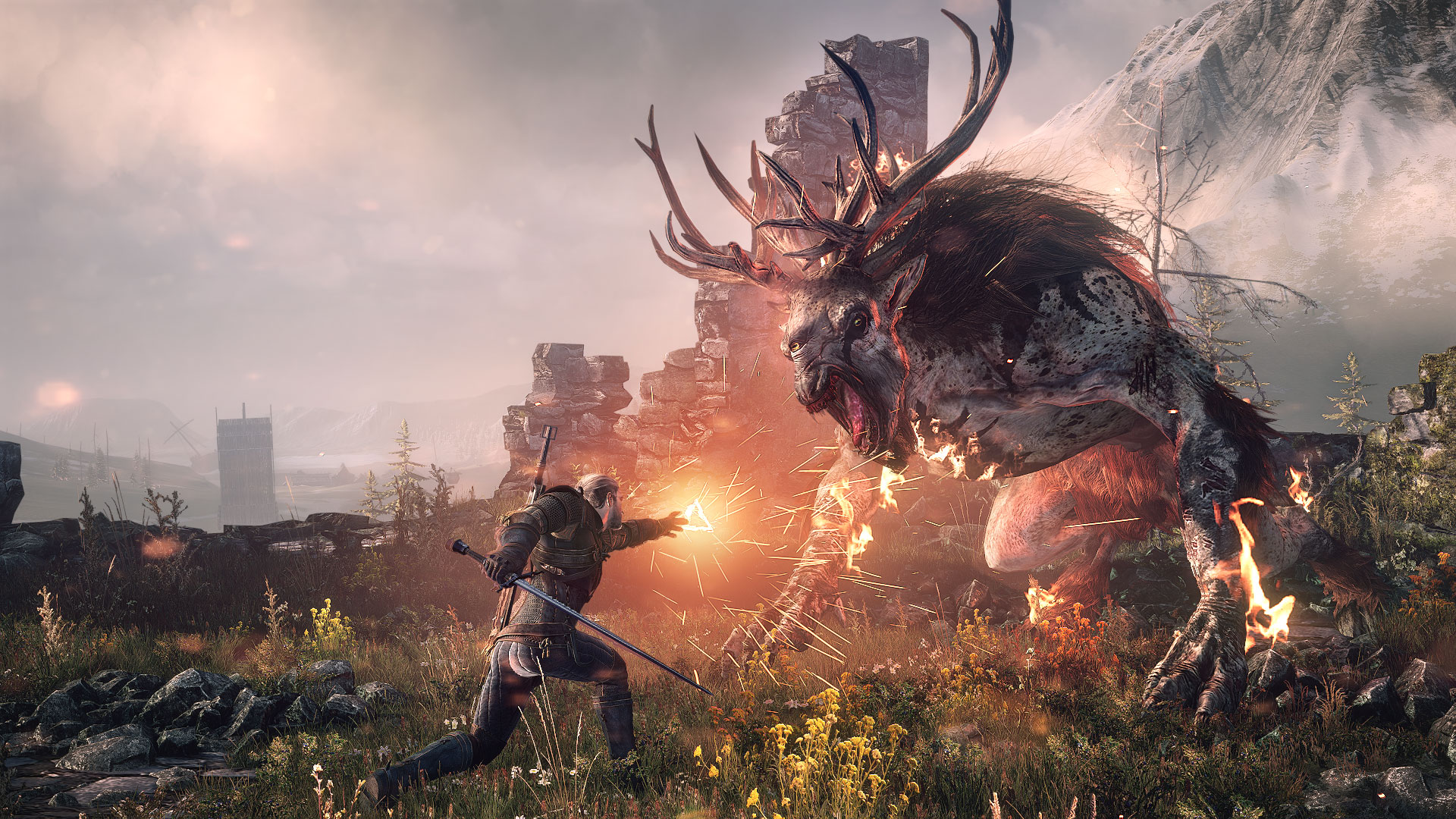 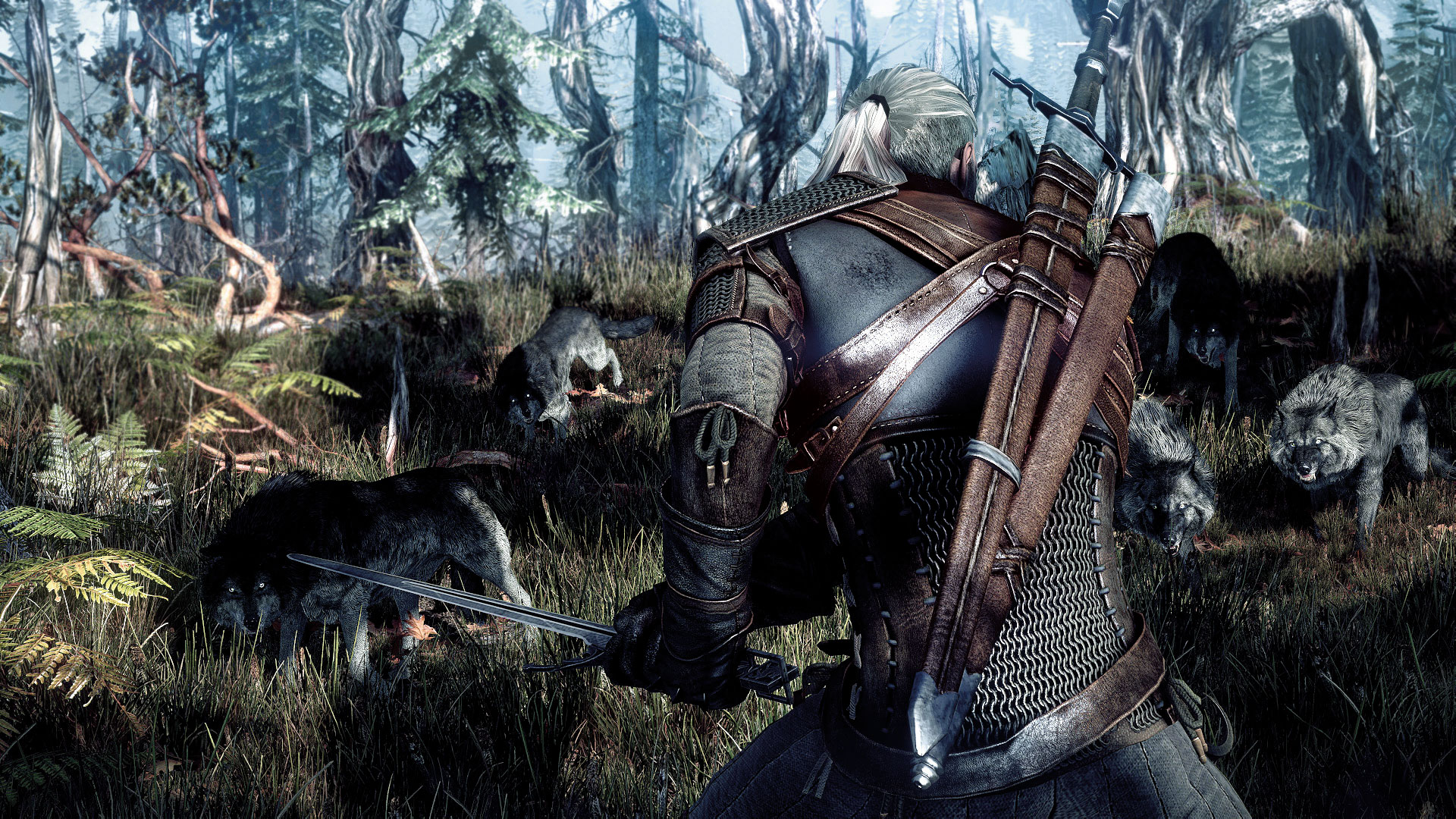 The Witcher 3 demo did include integration of a physics based fur technology.  It was pretty damn impressive but is hard to demonstrate in static photos.  You should try to find some videos online of the title if you can – it is more than worth the effort!

Another big partner brought on stage was Epic showing the Infiltrator demo running on a single NVIDIA graphics card (likely a Titan).  This is the video of what we saw:

No, the demo isn’t new, but that doesn’t make it any less impressive that it was running on a single graphics card, in real time.

Obviously NVIDIA has a lot of work to do in the coming months, through no fault of its own really.  The inherent response from the media with AMD’s dominance in the console market is that this will carry over to the PC as well in due time.  NVIDIA has thus taken a hit by not at least forcing its way into one of the consoles to force the same 50/50 split that existed in the previous generation.  From a PR perspective NVIDIA will be getting game developers up on stages for the foreseeable future to make sure gamers and the industry knows that it still values the PC gaming markets and is dedicated to it with the GeForce brand.

Being somewhat on the inside of this business though I believe that NVIDIA continues to be committed to the PC ecosystem, regardless of the success of projects like Tegra and SHIELD directly.  The GeForce Experience software technology is meant to address some of the PC-specific complaints for casual games – that it’s too hard to setup – and does with a grace I didn’t initially expect.  Don’t be surprised if later in 2013 you see some campaigns from NVIDIA telling everyone that PC gaming can be just as easy, just as “plug and play” as the consoles, as long as you are using GeForce graphics.

For the green team, the next 12 months are going to be interesting – that includes the lead up to and then the first wave of next-gen console games.  How will developers react?  How will gamers?  More importantly, how will NVIDIA?