Perhaps more important than the x86 core changes are the improvements Intel has made with regards to the integrated processor graphics.  While Ivy Bridge was rumored to be the death knell for discrete GPUs in the mobile market, both NVIDIA and AMD were able to find a place to market and sell their parts.  Haswell looks to be much less forgiving. 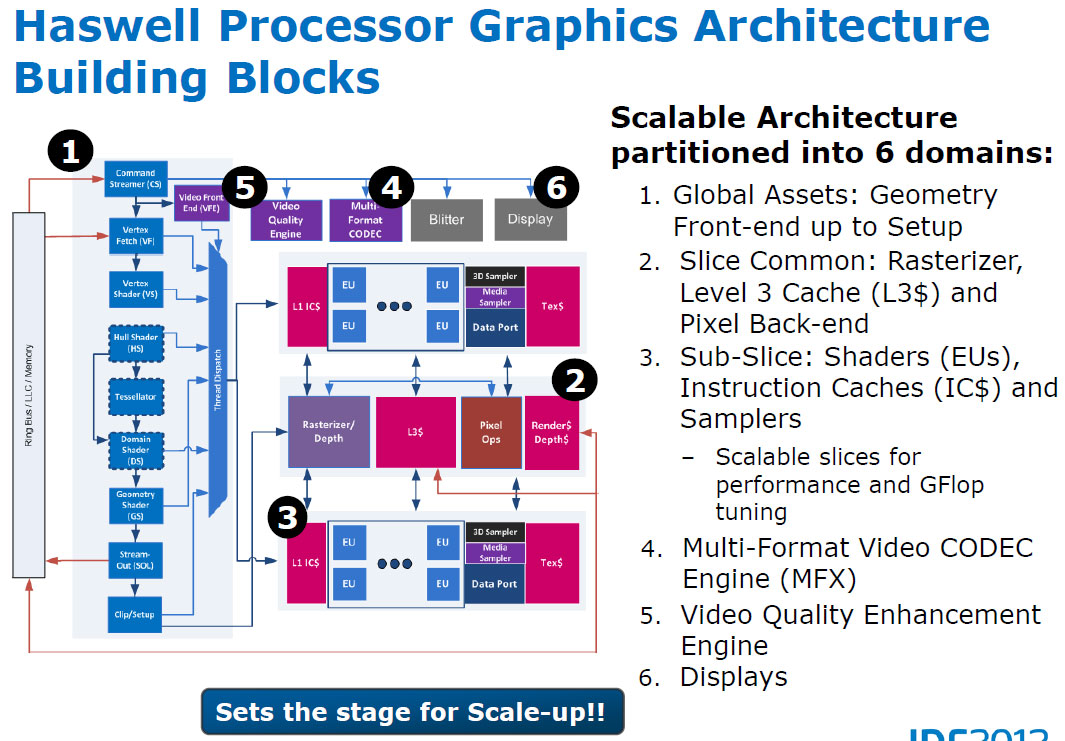 The truth is that the graphics and media overview for Haswell is very similar to that of Ivy Bridge – including the same 6 domain partitioned architecture we saw at IDF last year.  Domain 1 includes the typical setup and front-end action, domain 2 handles rasterization, domain 3 has the compute units (shaders) that Intel calls Execution Units (EUs).  The fourth domain has CODEC engine, domain 5 is for video enhancement, and 6 is for displays.

This iteration will include support for DirectX 11, OpenCL 1.2, and OpenGL 4.0. 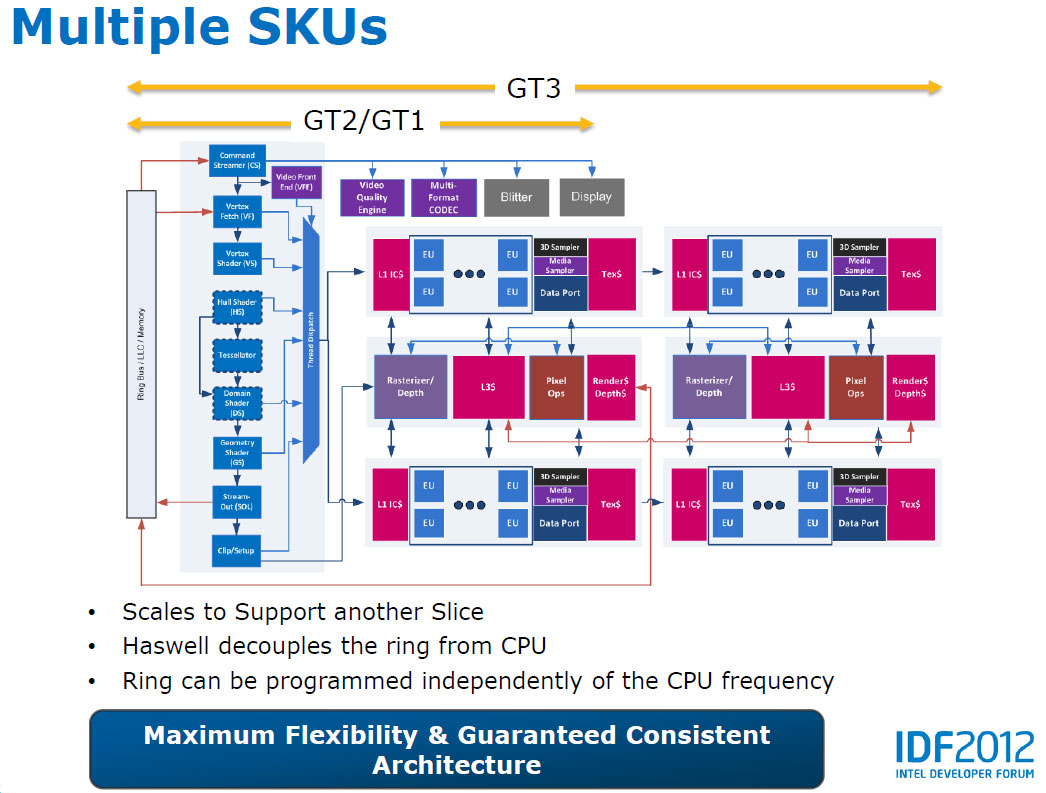 This segmentation of the processor graphics allows for the same kind of modularity that the entire Haswell design is dependent on.  While the GT1 and GT2 options will still exist (as they do today with Ivy Bridge) the new hotness is the GT3 option that essentially doubles the computing power of the GPU; Intel calls this a "slice".

As I mentioned before, Haswell has decoupled the ring interconnect from the CPU so the GPU is able to pull more power over that bus to increase memory bandwidth without increasing the voltage to the CPU cores. Doing so lowers the required power consumption. 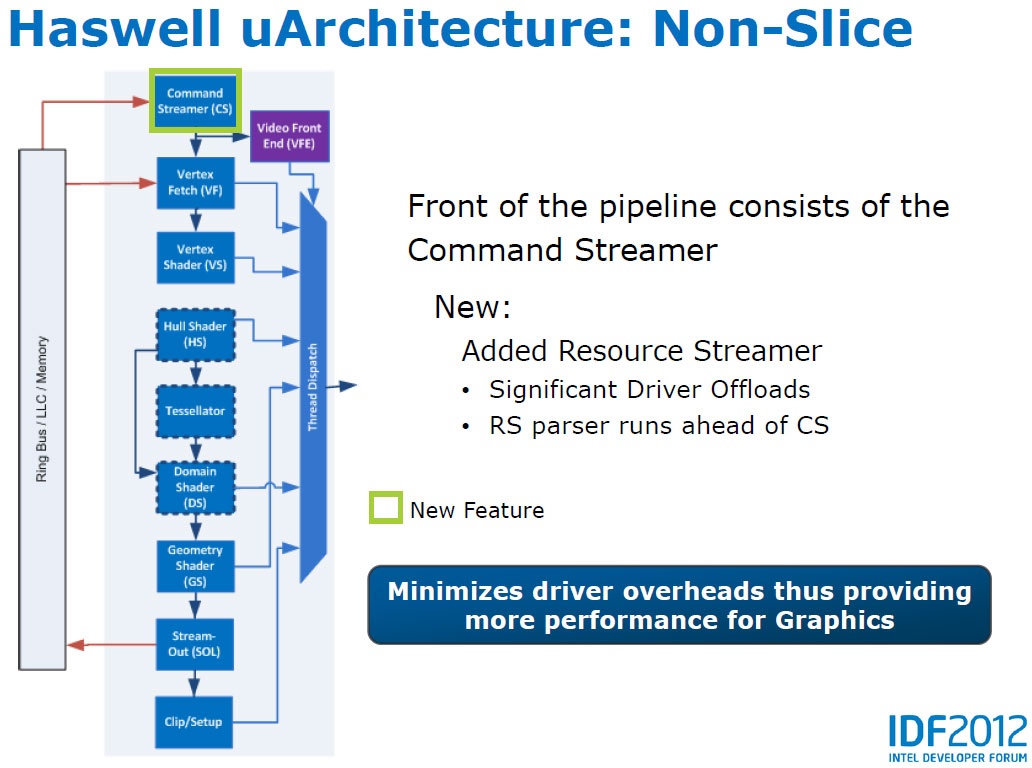 Obviously the setup stages of the processor graphics needed to be improved in order to handle the increased performance of the GT3 iteration, so Intel has doubled the performance of most fixed function units.  The setup is able to push about 500 GB/s of internal bandwidth, and should be enough to keep the execution units (EUs) of the GT3 feed. 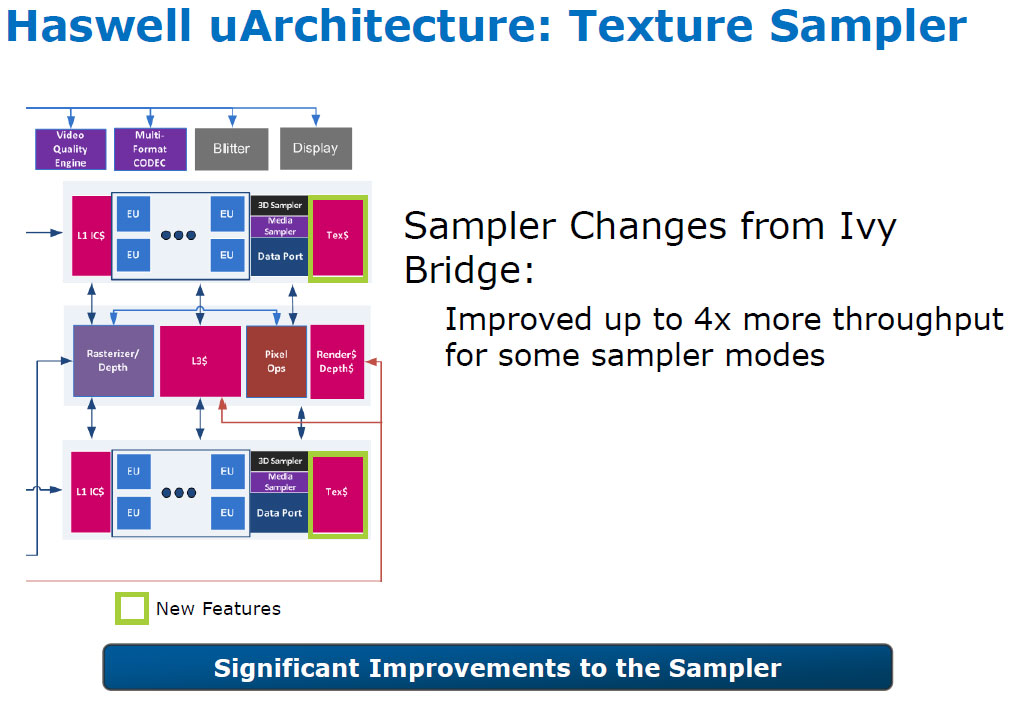 Finally, the texture sampler on the new processor graphics will see as much as a 4x improvement for some modes.

A big reveal from Intel in early May was that 128MB of embedded DRAM would be included on some high end GT3 offerings, mostly aimed at the high-performance mobile markets and the thin all-in-one desktop solutions.  Even though those options aren't going to be available for desktop DIY users as replaceable parts, there is some hope that Intel might change course and offer a GT3 model with eDRAM for that market.  A quote from Intel on the subject:

We are very committed to the desktop enthusiast market and continue to offer multiple variants of our K-SKU line with awesome performance and unlocked capabilities.  We are assessing demand for Intel® Iris™ and Iris™ Pro graphics in our desktop socketed SKUs but are not offering a variant at launch.  With increasing demand for low-power and thinner systems we have prioritized our Iris and Iris Pro products for the mobile and desktop AIO market at this time, where Iris and Iris Pro have amazing power performance characteristics.

For now, expect the Iris Pro solutions that utilize eDRAM to be limited to notebooks and AIOs.

Much of the media capability changes are simply spec changes – covering more codecs with accelerated hardware, an improved video processing engine, and the like. 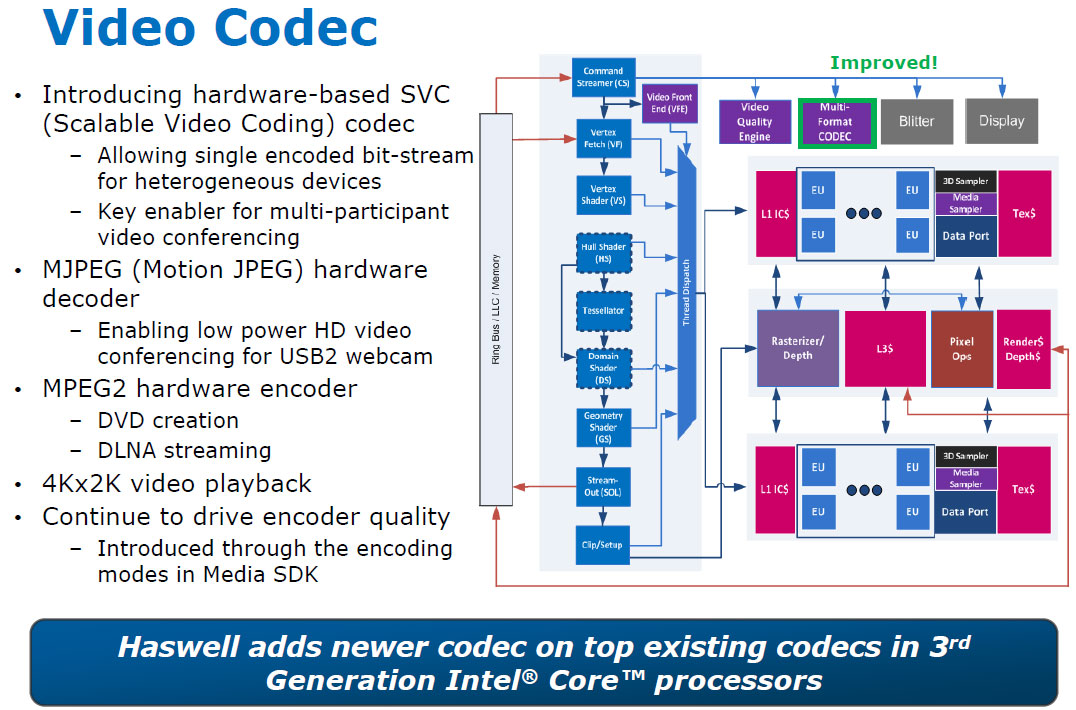 The video codec engine sees additions of MJPEG (often used for web cameras) and SVC while improving overall quality for existing codecs too.  Video processing improves with the ability to convert frame rates, and to do image stabilization similar to what AMD does with SteadyVideo.  And you'll see that QuickSync performance will increase with the GT3 implementation as well.

Intel will be supporting 4Kx2K displays with Haswell, and with significant price drops on recent 4K TVs, this is good news. 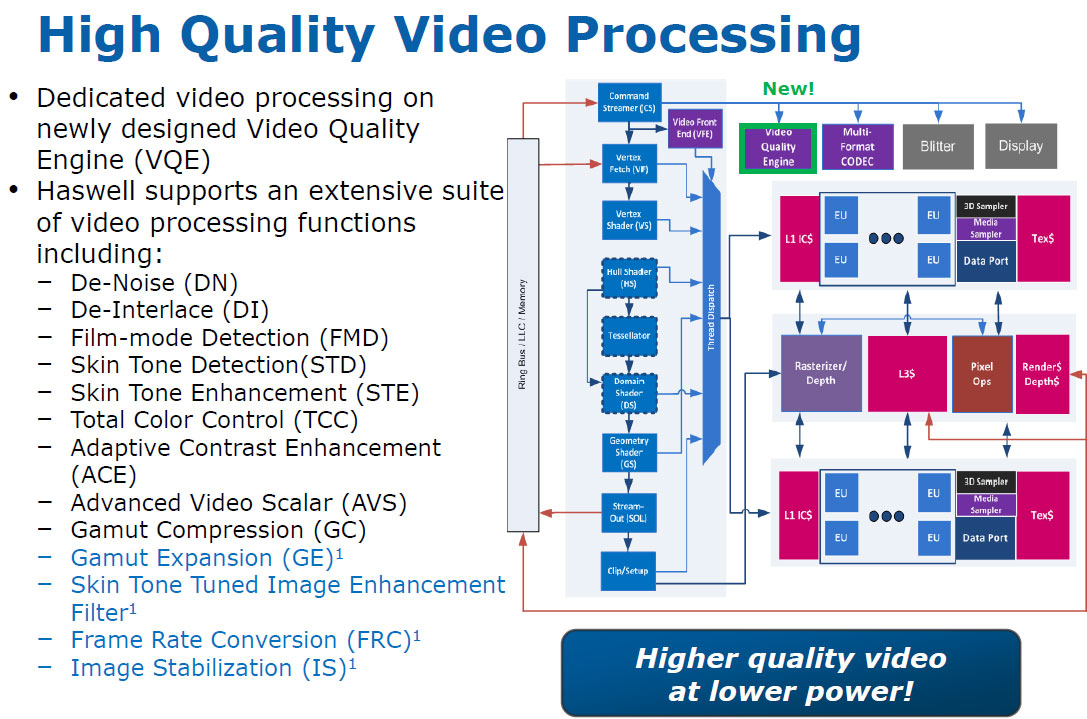 If you want video processing, Intel's Haswell will have you covered; you can see the additions to this segment at the bottom of the above slide. 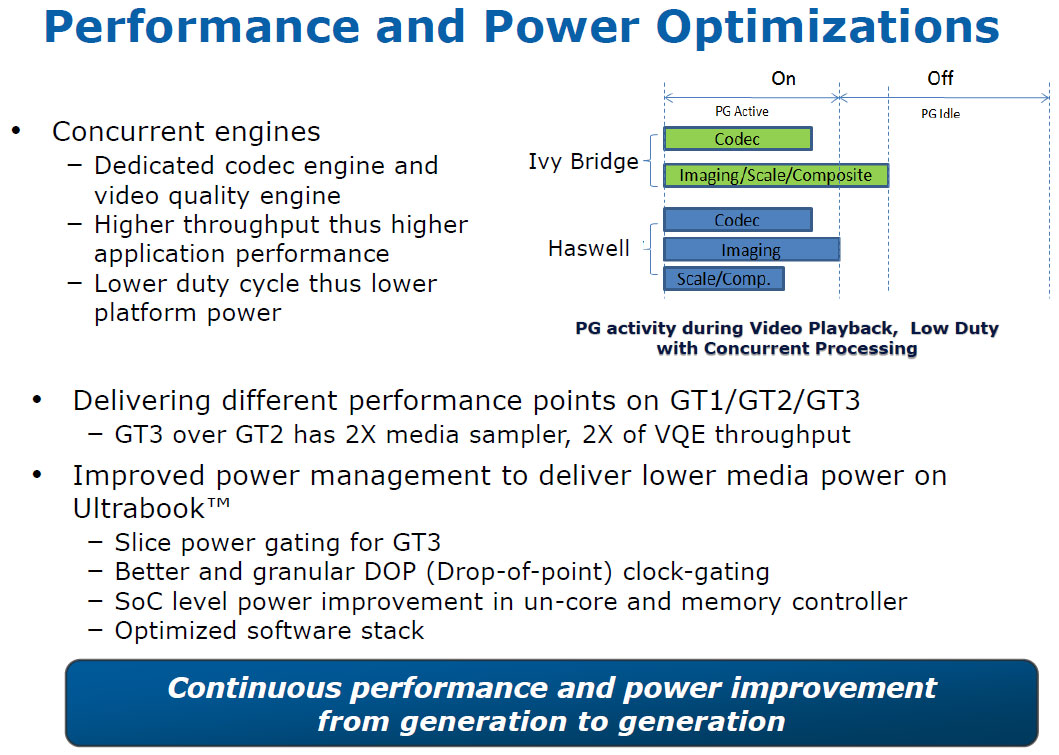 With Haswell, concurrent video engines will be enabled to allow for higher throughput and better performance.  This will also result in a lower overall duty cycle and should increase battery life on mobile platforms in the process.

Power management will be improved for mobile media consumption with improved power gating on the various "slices" on the GT3.  The full GPU doesn't have to be enabled for QuickSync or other video operations if the source doesn't require that much throughput.

Some pretty substantial changes are occuring with the new WiDi 4.1 release on Haswell including panel self refresh support, improved latency and Miracast certification. 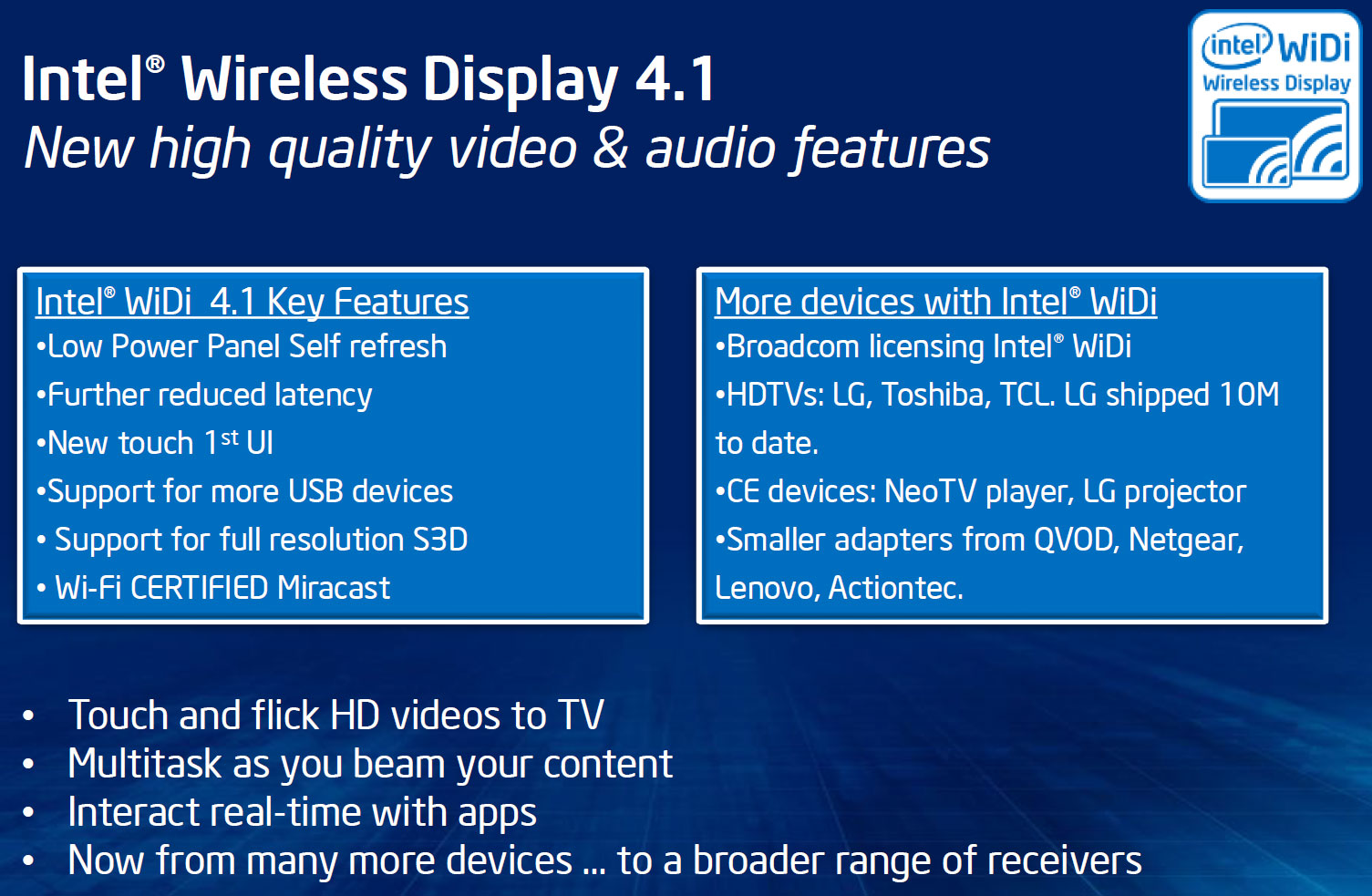 No longer locked into Intel wireless controllers, with WiDi 4.1 OEMs will be able to utilize Broadcom chips and still support wireless displays with the Intel standard thanks to a new licensing agreement.  The panel self refresh is great for displays that will support it and improving latency is definitely a necessity if you are going to be doing anything interactive on the WiDi monitor, including gaming.

Both Intel and AMD are now claiming harmless levels of latency are found in their respective wireless display solutions and I am eager to see which live up to those claims.

You have heard me mention support for three simultaneous displays as well as support for 4K resolutions when talking about the new Haswell design.  Intel provided a very interesting table that gives us information about how these displays can be configured and what maximum resolutions they can run at in each setup. 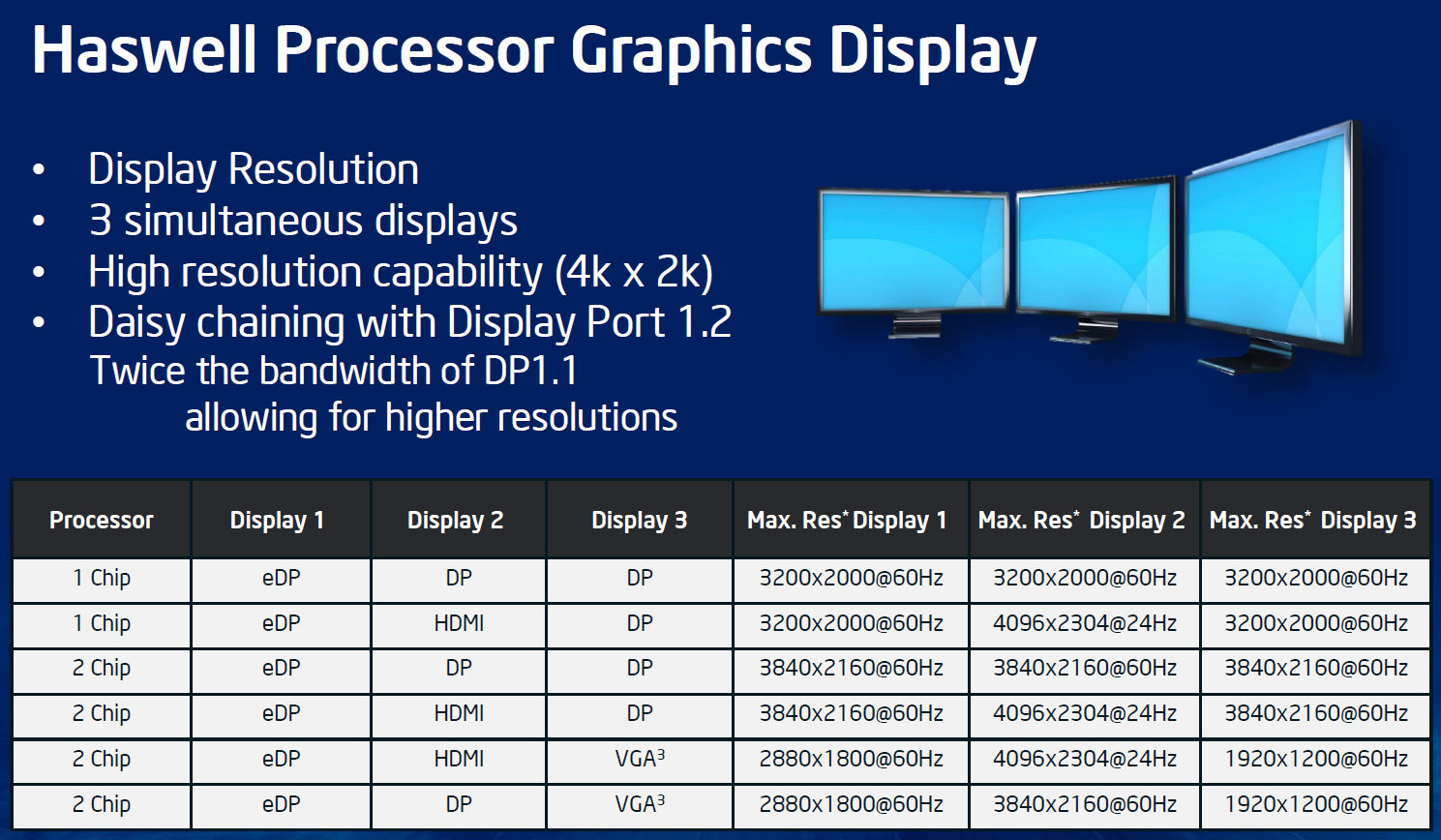 For reference, the "1 chip vs 2 chip" designation refers to the CPU + PCH (south bridge) package option for notebooks; desktop users and most laptops will likely still be built on the 2 chip design, so lets focus on that. With DisplayPort and embedded DisplayPort, you can support three monitors at 3840×2160 @ 60 Hz out of the processor graphics on Haswell – pretty impressive.  You'll be able to run a single HDMI/DVI as well as a single VGA connection as well and use three monitors but you MUST have at least the eDP connection enabled and utilized.