Though our review today is focused on the desktop component of Haswell and the Intel 4000-series of processors, we definitely need to at least discuss the push of the new architecture into the mobile categories.  And actually, Haswell is much more important to mobile and Ultrabooks than to desktops. 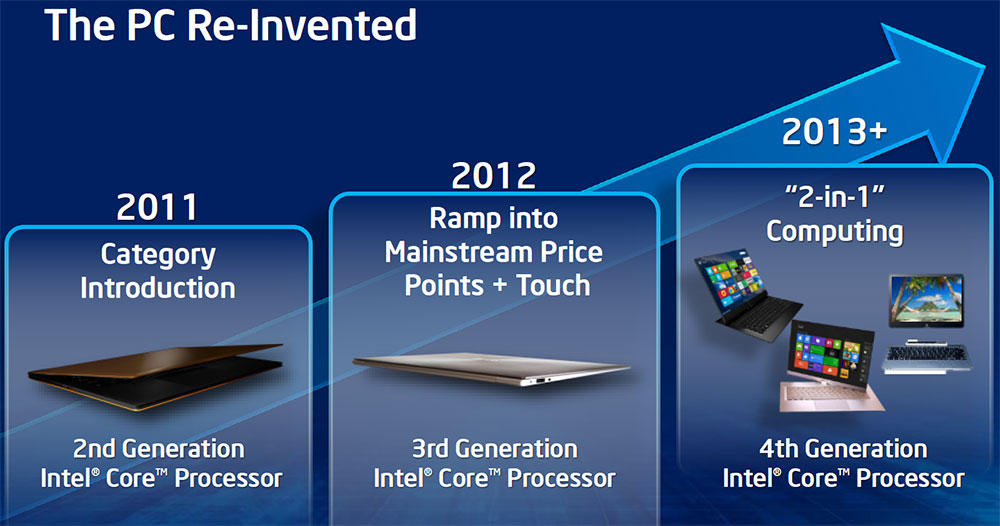 Though we did see hybrids from Intel with the Ivy Bridge 3rd Generation processors, with Haswell and SKUs with much lower TDPs/SDPs I expect we'll find high performance processors in basically every form factor you can think of.  And hopefully some you can't.

The Core i7/i5 lineup will have four different mobile derivatives seen above.  The H-line will be the highest performing processors with the most graphics horsepower and potentially embedded DRAM options.  The M-line will be the most common in your standard, budget laptops while the U-series will be the SoC package design that will offer a balance of power efficiency and performance in Ultrabooks.  The Y-series, not yet available but coming in 2013, will be the lowest wattage designs (think under 10 watts) and will find its way into detachable tablets and hybrids.

With this release Intel is also offering a new version of its BGA design for Haswell that actually combines the processor and PCH (south bridge) on to the same package; not the same die.  On the left side you can see the longer piece of silicon that represents the Haswell CPU/GPU combination and the smaller die that is the PCH.  This new design allows for smaller board designs and smaller cooling configurations for lower TDPs.  The standard 2-chip solution will be available at a lower cost and will support higher performance options including GT3e graphics. 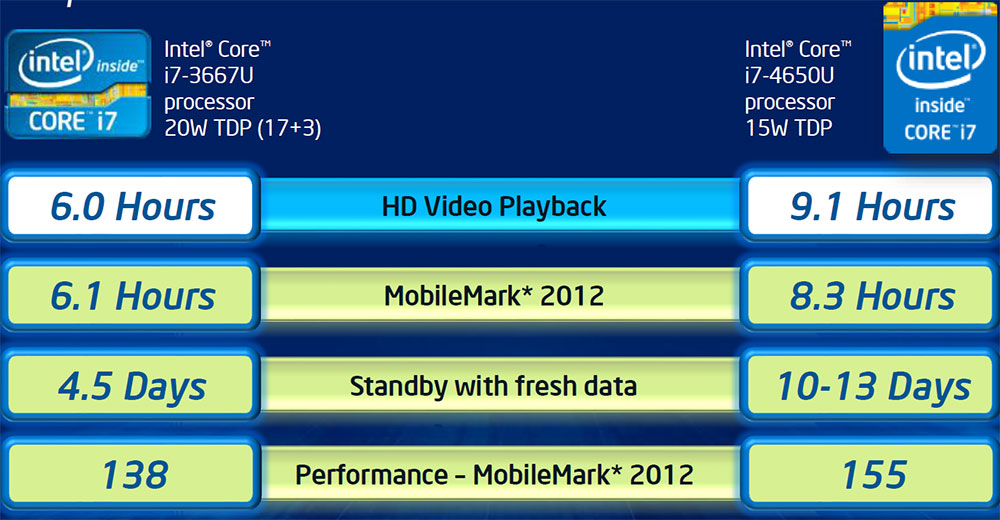 Intel claims that the jump from Ivy Bridge to Haswell is the single largest increase in battery life Intel has ever seen in the mobile space.  That is quite a claim but the technology is impressive enough for us to believe it!  The ability to run in standby for 10-13 days thanks to support for the Microsoft Connected Standby technology is great but the ability to improve video playback time by 50% is astounding as well; while getting better performance at the same time. 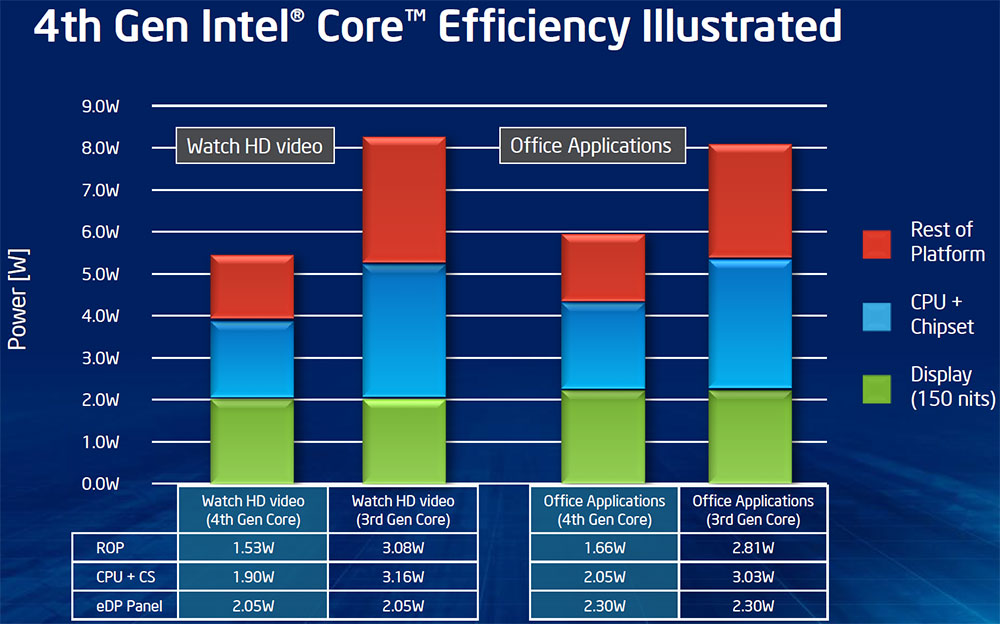 We are now beginning to see the effects of other components of these systems dragging down the ability for chip manufacturers to improve battery performance.  With the graph above we can see the power consumption drop from IVB to Haswell but the screen power remains the same.  With the move to a more SoC style design the platform power draw also decreases substantially. 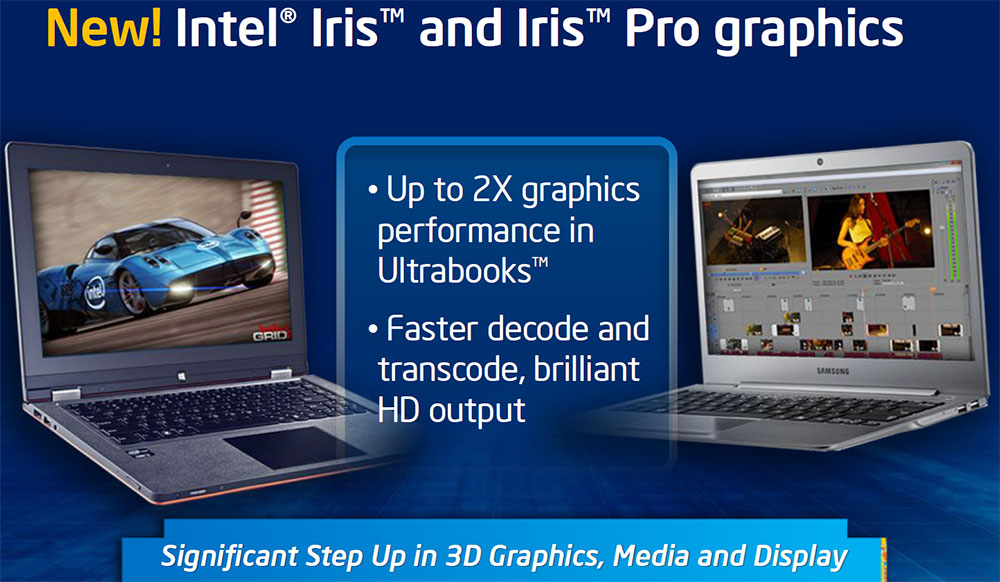 We've already discussed Iris and Iris Pro graphics on the previous page but for certain models, those with GT3e for instance, the new Haswell can perform as much as 2x better in Ultrabook and other notebook designs. 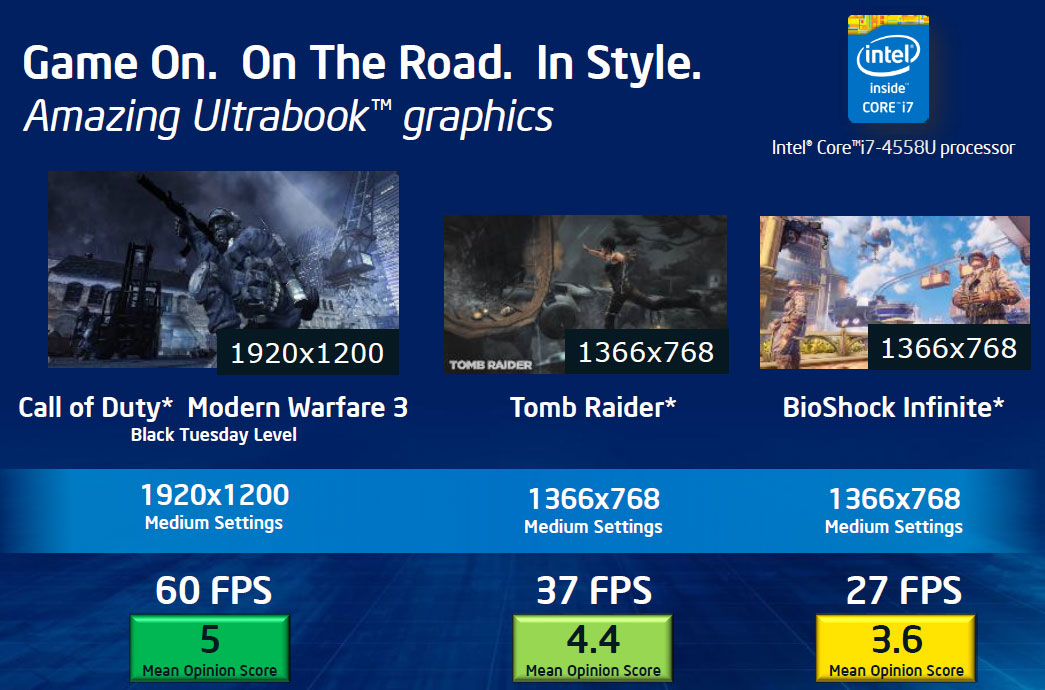 Along with the Haswell processor shift comes a completely new set of Ultrabook rules and regulations.  To meet minimum specifications OEMs will now have to including things like WiDi, a touch screen, wake times under 3 seconds and more than 9 hours of battery life at Windows 8 idle.  These are great!  What is not great in my view is requiring voice control support with expensive dual microphones and specific, Intel built identity protection hardware and software.

There are going to be three M-series parts available at launch starting with the big boy – the Core i7-4930MX that is a the full quad-core, HyperThreaded CPU running at up to 3.9 GHz and Intel HD Graphics 4600 integration.  As a 57 watt CPU though, you should only expect to find it in high-end gaming machines or workstation replacement notebooks that can eat the $1000+ pricing.

The H-series Haswell processors will include the i7-4950HQ and the i7-4850HQ, both of which are quad-core parts that include Iris Pro 5200 graphics with eDRAM.  Pricing is set at $657 and $468 respectively, so again, these CPUs will only be found in fairly expensive laptops.

Finally, the U-series has two members out the gate, the Core i7-4650U and the Core i5-4350U, both dual core with HyperThreading and Intel HD Graphics 5000 support.

More mobility 4th Generation processors from Intel will be available than this as we progress into the year with 19 total U-series options planned.