Before we touch on gaming or use cases for the PQ321Q I want to talk about my experiences using the 4K display as desktop monitor in Windows.  The very first item to note – the difference between the experience of a 60 Hz and a 30 Hz display is quite apparent when you use them back to back – switching from 30 Hz mode to 60 Hz results in much better mouse movement and acceleration and even little things like the animation of the charms coming up in Windows 8 is made very noticeable.  The limit to 30 Hz on the SEIKI 4K TVs now more than ever seems like a drawback that we'll have to weigh against the low cost of those screens.

Also worth noting, showing the differences of a 4K panel with an incredibly high pixel density is pretty hard to do in Windows currently.  Unlike a fixed screen size device like a tablet or a phone, I found it very hard to compare the pixel sizes of our 30-in 2560×1600 Dell 3008WFP to the 31.5-in 3840×2160 ASUS PQ321Q, but we will try to give you some idea here with pictures we took throughout the week.

Let's start though with screenshots from the operating system. 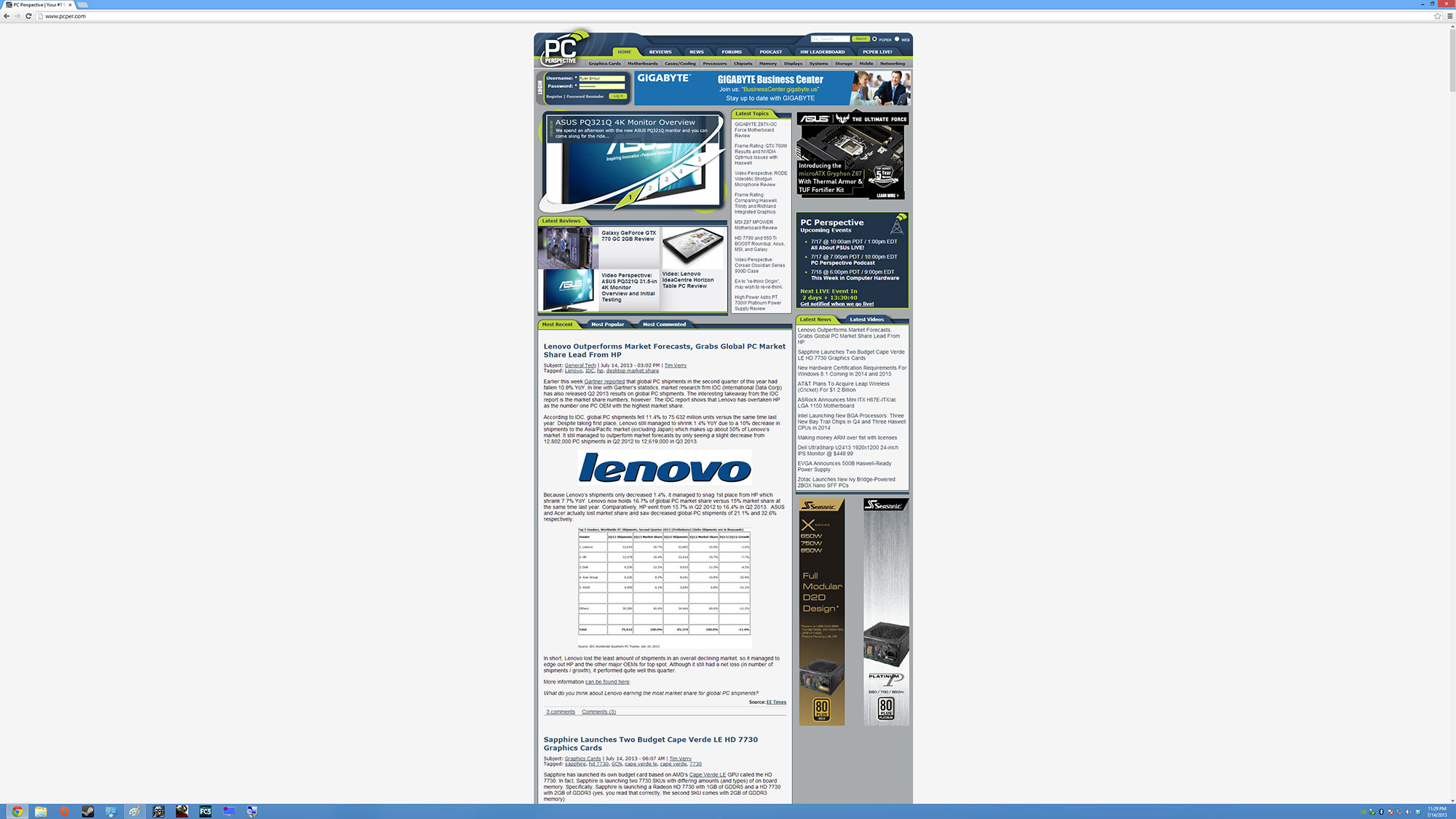 If you only like to browse the web in a full screen mode you better get over that quick with the PQ321Q. 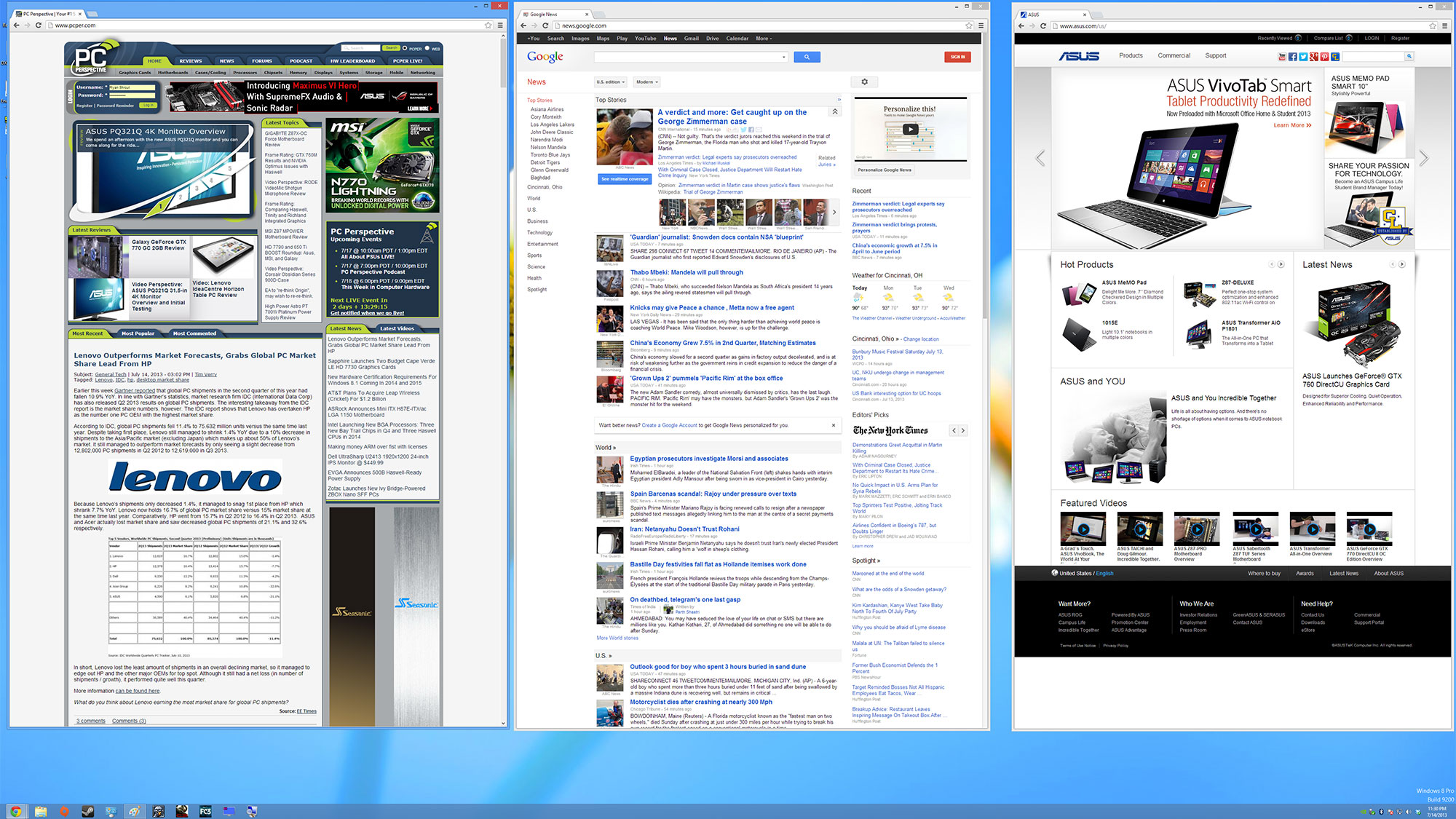 What you can get however is three full-length windows running side by side presenting an incredible amount of data on the screen at one time.

With Windows at the 100% DPI level fonts looks crisper and sharper than ever before though images that aren't built for super high resolution panels are going to look blurry in comparison. 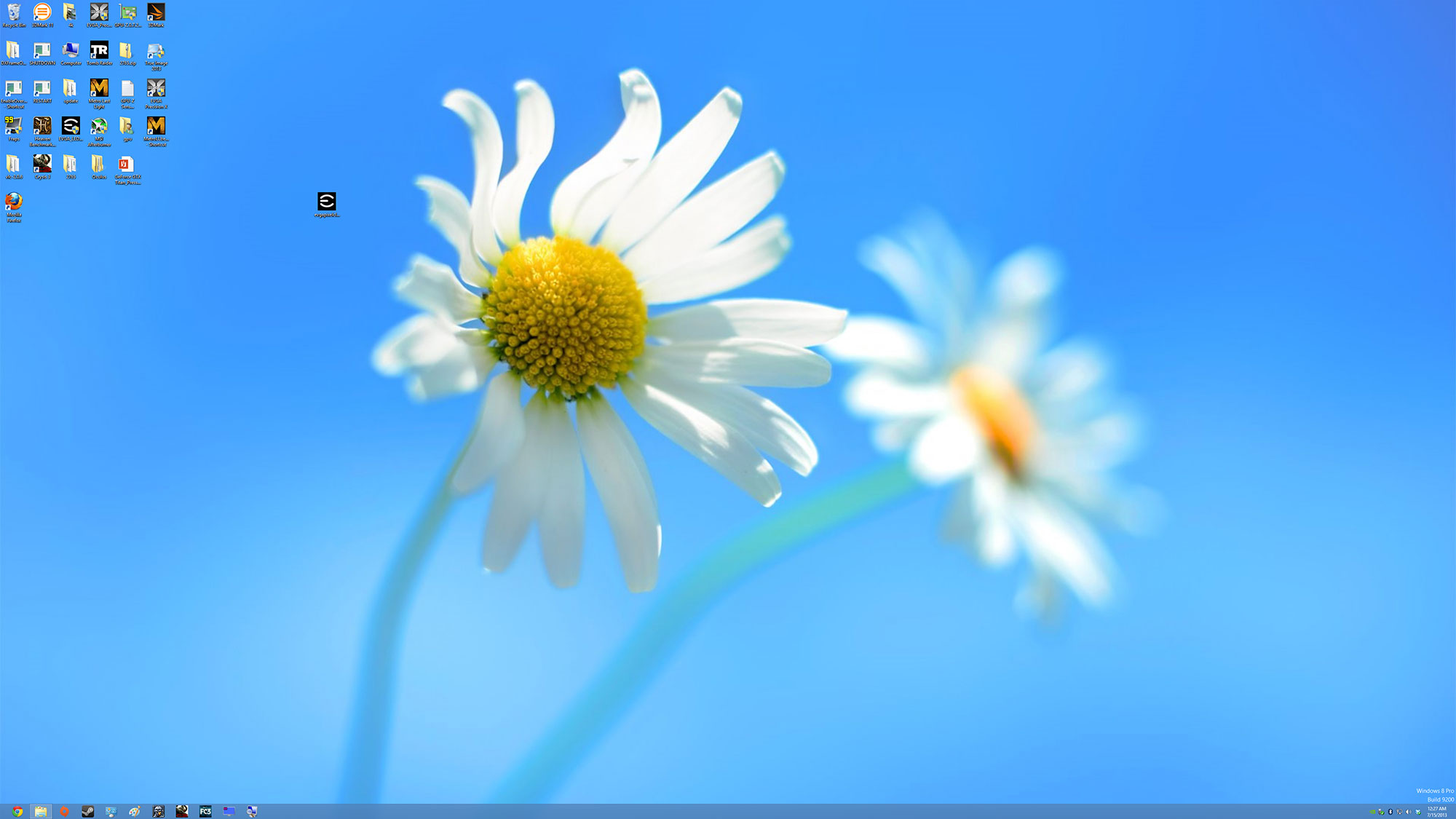 This is our desktop runnig at 3840×2160 at the default Windows 8 DPI setting of 100%.  Notice how small the icons look – they can be hard to use at this size and are hard to read even from a disatance of 2 ft; pretty standard for a desktop user. 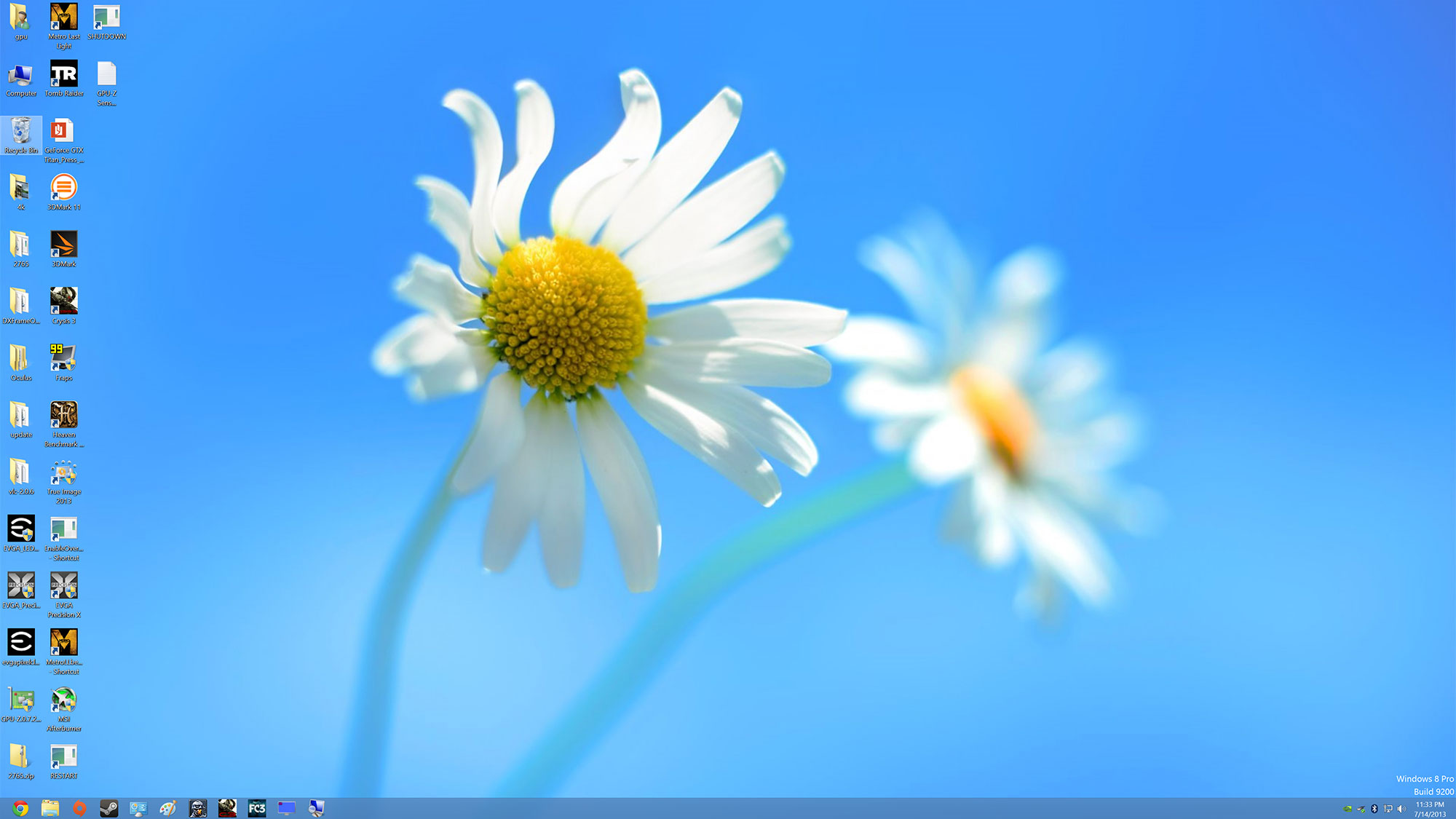 By increasing the DPI setting to 150% (found under the Control PanelAppearance and PersonalizationDisplay control panel setting) you instantly see a difference in the icon size and text, making the user interface of Windows more usable.  I also noticed that some icons (like MSI Afterburner) were now much lower quality than they were at 100%. 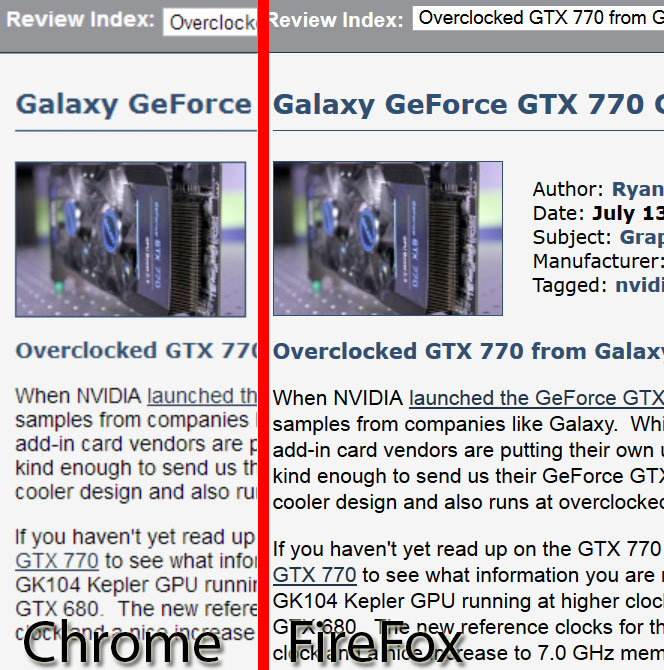 Other applications had similar issues – programs like Steam aren't designed for high-DPI displays yet and the fonts are using non-standard rendering modes so Windows can't help them out.  Even Google's Chrome browser isn't immune to problems, as you can see in the image above.  At the 150% DPI setting in Windows, FireFox is able to render text on websites much clearer and I can assure you that in person the effect is even more dramatic.

It is worth noting as well that with the Windows 8.1 update Microsoft has improved support for high DPI displays like the ASUS PQ321Q.

In order to address these scale/DPI issues, in Window 8.1 the maximum DPI scaling value was increased from 150% to 200%. This additional scaling capability provides two distinct advantages for high-DPI displays on Windows 8.1:

– 200% scaling enables pixel-doubling for up-scaling which provides a clear and crisp appearance for images, graphics, and text.

In my day to day computing I use a dual 30-in panel configuration at my office so moving to single 4K 32-in display isn't quite the upgrade in real estate that I was hoping for, but the clarity difference in the ASUS monitor is incredible even compared to the Apple Cinema Displays I am staring out currently.  I just need to get a second one of these PQ321Qs…

In an attempt to show relative pixel sizes on the new PQ321Q and the Dell 3008WFP that was sitting next to it on the table (with a resolution of 2560×1600), I made the below two images.  Now neither are perfect photography but they were the best we could do with the macro lens capability we had at the time. 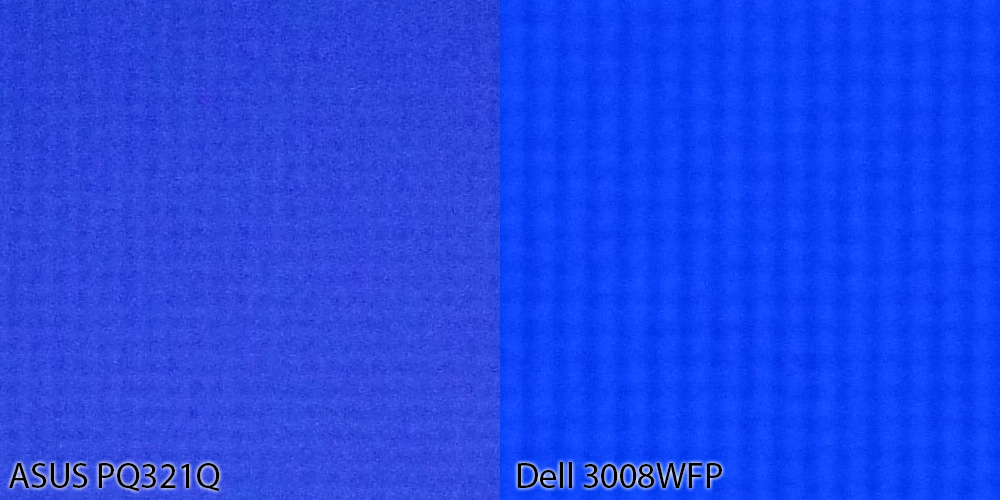 This is a photo from the top left corner of the Windows 8 start screen so while there isn't any image here you can clearly see the pixel sizes for each monitor.

While these aren't perfectly lined up, comparing the two words on this image is able to show how a higher pixel density results in clearer text.  Yes, the image on the left is actually a bit blurry (again, macro capability) but the text on the right hand side is very obviously made up of pixels and even some of the bleed through is visible.  The ASUS PQ321Q presents the letters in a much more consistent manner.  I can assure you that in person, the quality of the text and images that scale with the DPI in Windows 8 are impressively improved with the 4K display.

The ASUS PQ321Q does offer another feature called picture by picture.  Essentially, you can attach two different devices to each of the HDMI inputs and run them at the same time.  The result is seen below. 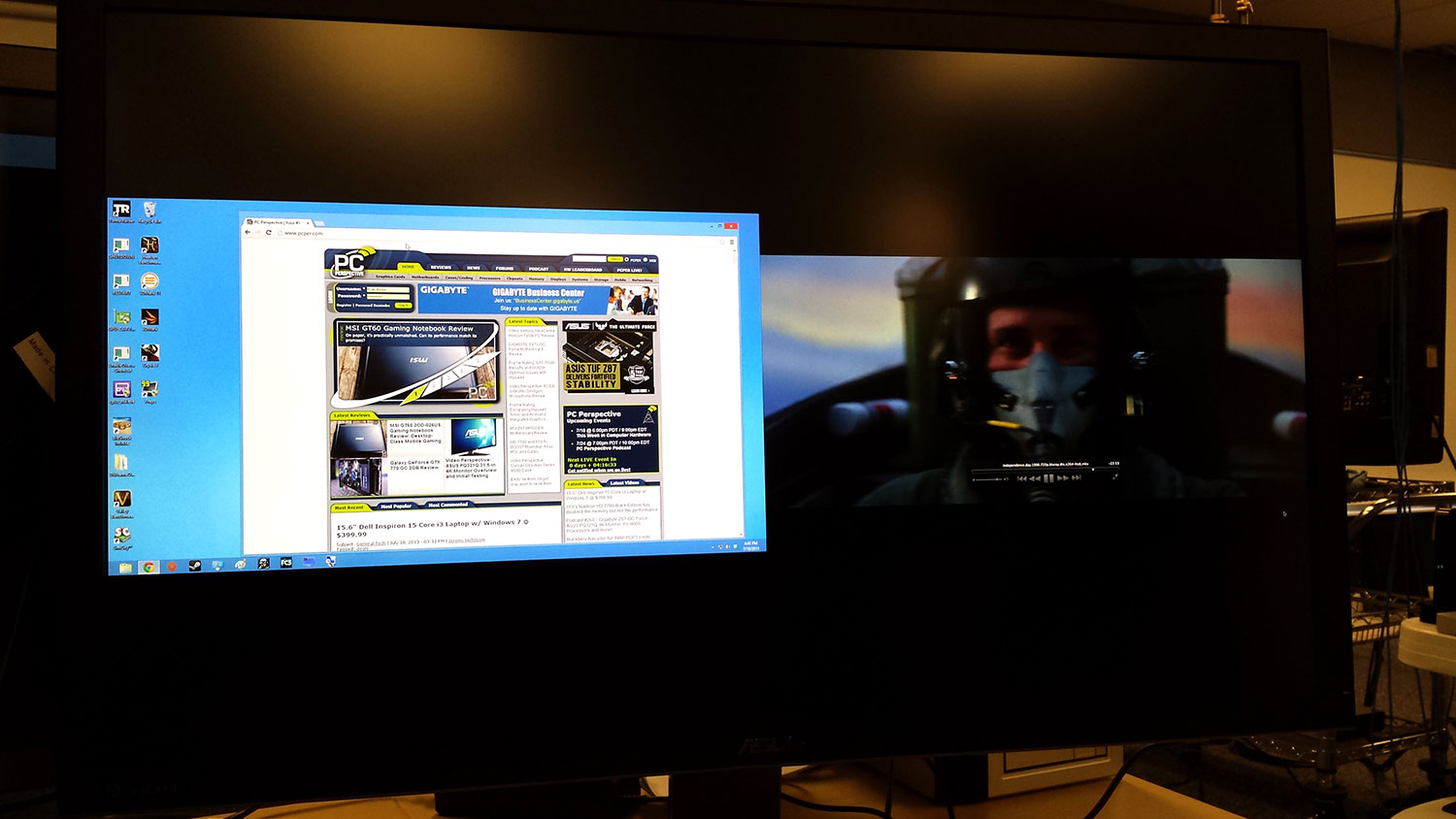 Above we have attached our GTX Titan test bed on the left and a MacBook Air on the right playing back a movie.  While it works, I can't help but feel that this is a complete waste of a $3500 monitor.  The user is presented with a pair of 15.5-in 1080p displays running side by side and I see basically zero use cases for that when you could be running at 3840×2160.  If you had the ability to run each side at 1920×2160 (taking up the entire left and right side of the screens) there might be more utility but ASUS told me that wasn't yet on the roadmap. 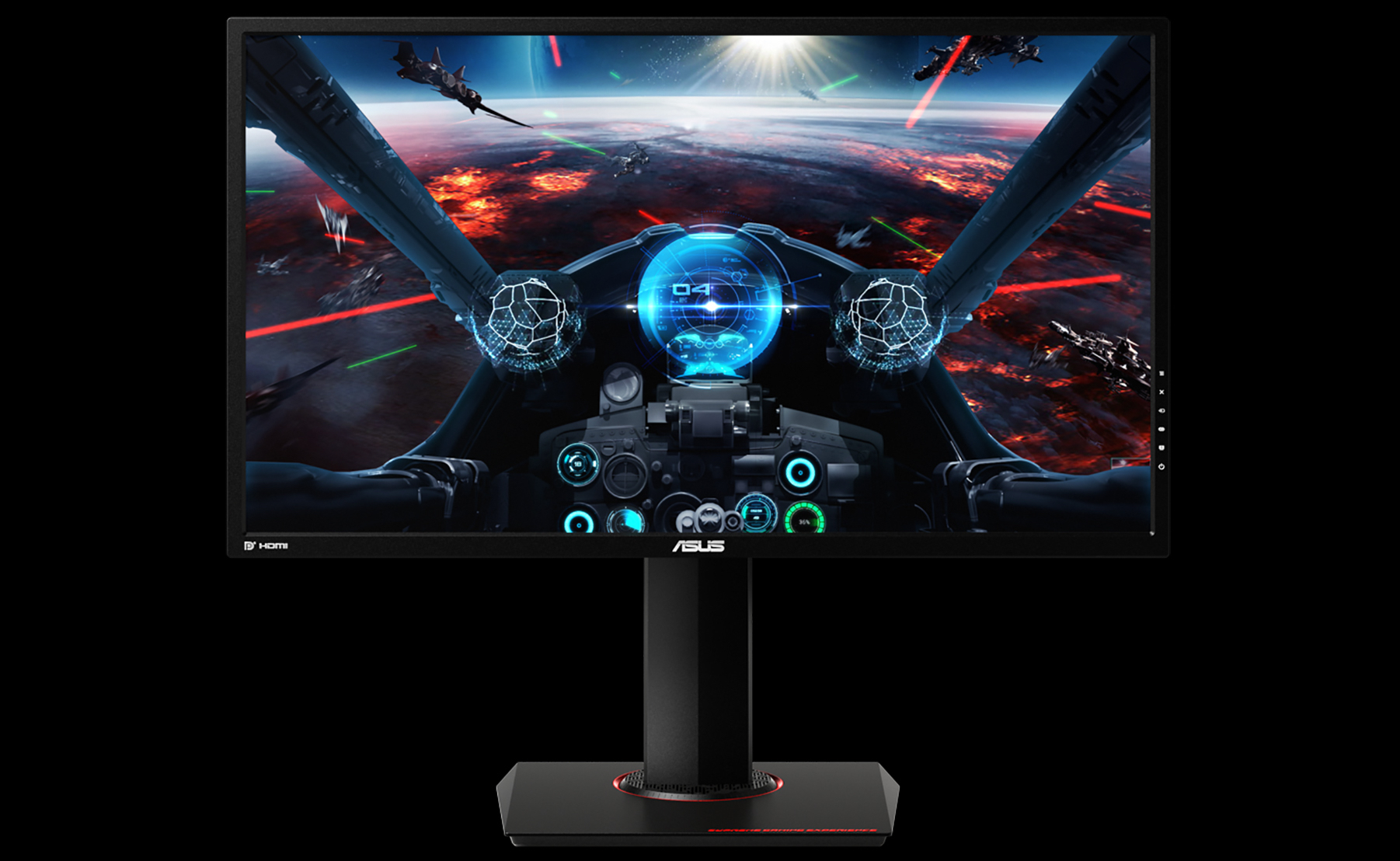