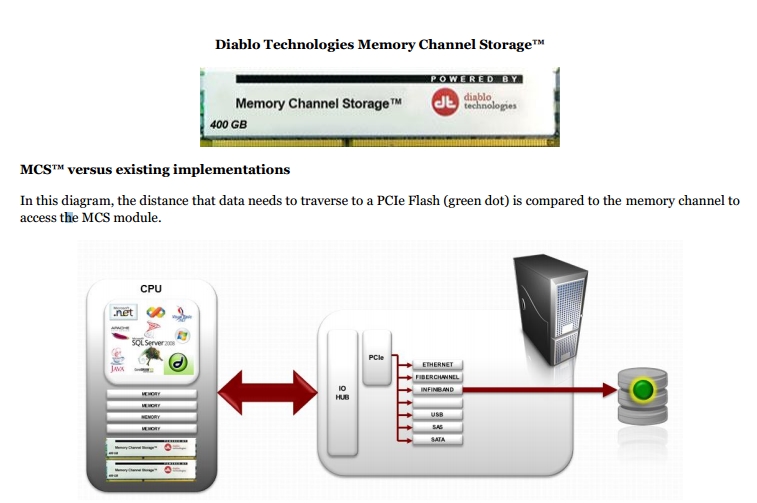 Ottawa-based Diablo Technologies unveiled a new flash storage technology yesterday that it calls Memory Channel Storage. As the name suggest, the storage technology puts NAND flash into a DIMM form factor and interfaces the persistent storage directly with the processor via the integrated memory controller.

The Memory Channel Storage (MCS) is a drop-in replacement for DDR3 RDIMMs (Registered DIMMs) in servers and storage arrays. Unlike DRAM, MCS is persistent storage backed by NAND flash and it can allow servers to have Terabytes of storage connected to the CPU via the memory interface instead of mere Gigabytes of DRAM acting as either system memory or block storage. The photo provided in the technology report (PDF) shows a 400GB MCS module that can slot into a standard DIMM slot, for example.

Diablo Technologies claims that MCS exhibits lower latencies and higher bandwidth than PCI-E and SATA SSDs. More importantly, the storage latency is predictable and consistent, making it useful for applications such as high frequency stock trading where speed and deterministic latency are paramount. Further, users can get linear increases in throughput with each additional Memory Channel Storage module added to the system. Latencies with MCS are as much as 85% lower with PCI-E SSDs and 96% lower than SAS/SATA SSDs according to Diablo Technologies. NAND flash maintenance such as wear leveling is handled via an on-board logic chip.

Some details about Memory Channel Storage are still unclear, but it looks promising. It will not be quite as fast in random access as DRAM but it will be better (more bandwidth, lower latency) than both PCI-E and SATA-connected NAND flash-based SSDs. It would be awesome to see this kind of tech make its way to consumer systems so that I can have a physical RAMDisk with fast persistent storage (at least as far as form factor, MCS uses NAND not DRAM chips). 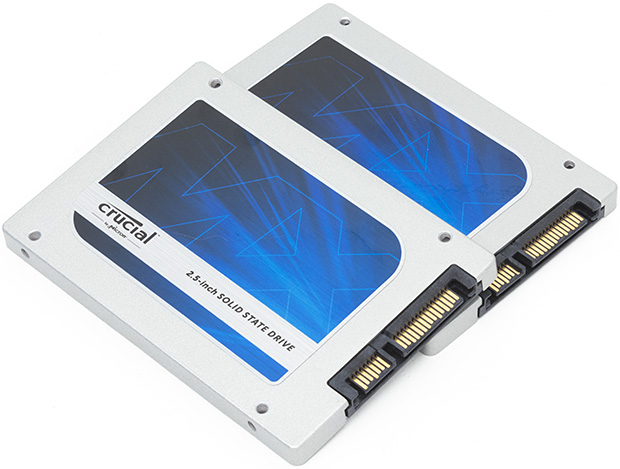