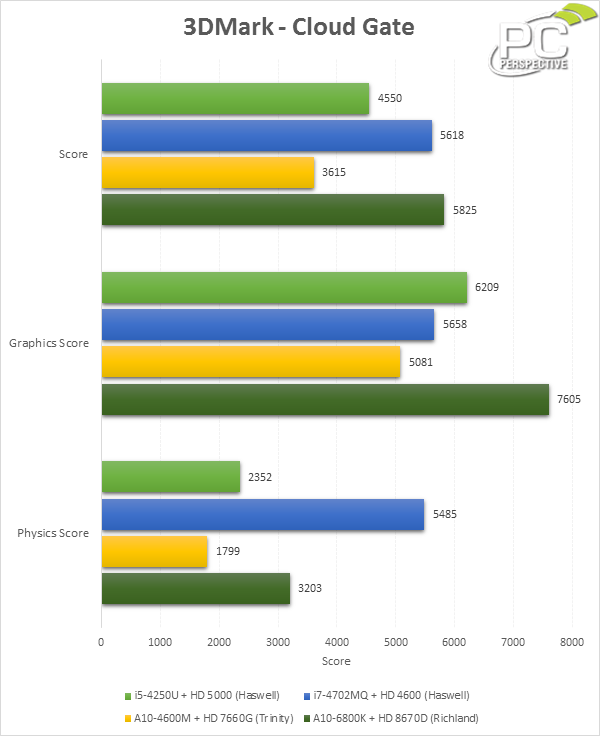 Our first test is the synthetic result from the latest 3DMark, specifically the Cloud Gate test.  Fire Strike WOULD run but the results were so low that I didn’t think we were seeing good comparison so I stepped down to the Cloud Gate test that was actually built for integrated graphics.

The highest overall score comes from the AMD A10-6800K Richland desktop processor, but not by much even compared to the Haswell + HD 4600 configuration of the MSI GE40 notebook.  Next down the line is the MacBook Air with the Haswell + HD5000 configuration and the Trinity notebook comes in last.  The graphics result scores show an interesting story – Richland IGP is much faster than any other option on the table as you would expect, but the CPU / physics score is so much lower than Intel’s Haswell that it drags the overall result much lower.  Also interesting in the graphics results is that the MBA with the much slower, dual-core Haswell processor and the HD 5000 graphics is running FASTER than the quad-core, higher clocked Haswell Core i7-4702MQ with the HD 4600 graphics – a difference of nearly 10%.  Trinity trails the HD 5000 result from the MBA by more than 20%.

Finally, looking at the physics scores, by far the best performer is our Core i7-4702MQ processor in the MSI GE40 system followed by the Richland APU, the Core i5-4250U and then Trinity APU.  Even with a desktop wattage level, the A10-6800K isn’t able to keep up with the Haswell notebook processor.