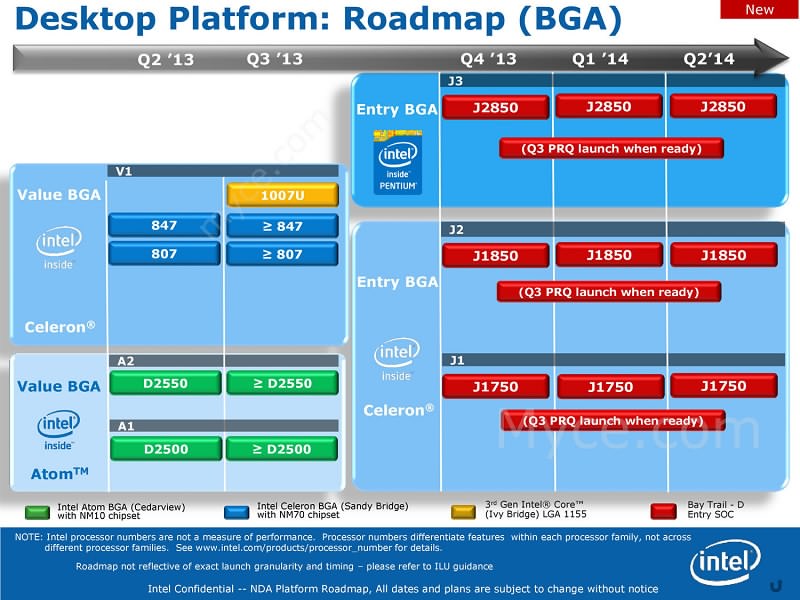 There has been a ton of BGA processor stories over the past year, with the most recent being that Intel will not be releasing the BGA-only 14nm Broadwell processors next year. It is not all bad news for BGA fans though, because Intel is reportedly introducing new BGA versions of Haswell-based chips late this year and in the first half of 2014.

According to a leaked road-map, Intel will release three new Bay Trail based BGA chips under the Pentium and Celeron brands by Q4 2013. Additionally, next year the company will launch three high performance BGA-only Haswell-based processors.

On the low end, Intel will launch three new Bay Trail-D based processors. The J1750 and J1850 will be Celerons while the J2850 will have Pentium branding. The specifications are available in the chart below.

For the enthusiast crowd that favors small systems (like Intel’s NUC), the company is releasing three new Haswell-based BGA processors under its Core i5 and Core i7 branding. Specifications for these high end chips are located in the chart below. Interestingly, these Haswell chips in a BGA package come with Intel's much faster Iris 5200 processor graphics. A high end desktop CPU SKU with Intel's GT3e (GT3 GPU with embedded memory) still eludes enthusiasts, however despite the BGA packaging. Note that the BGA Core processors are not coming until at least next year, according to the roadmap (which does note that dates are subject to change).

There has definitely been resistance against Intel’s BGA lineups by the enthusiast crowd, for fear that customization and DIY abilities would be hampered and that BGA would take over and displace LGA (socketed CPUs). In this particular case though, I think the new BGA processors are a good thing and so long as there continues to be LGA options for the DIY and enthusiast crowd, I look forward to seeing what platforms these new BGA chips are used in and what motherboard manufacturers offer with them (if they are even offered at retail at all, and not just to OEMs).

I think a BGA version of a desktop CPU with Intel's fastest GT3e processor graphics would actually be welcome since it appears that an LGA version is out of the question, and would be one way to sway desktop users over to Intel's BGA strategy and have them be open to similar options in future chips, such as Broadwell in 2015.