Returning home on Monday, I was greeted by several (slightly wet) boxes from Asus.  Happily, the rainstorm that made these boxes a bit damp did not last long, and the wetness was only superficial.  The contents were perfectly fine.  I was pleased by this, but not particularly pleased with FedEx for leaving them in a spot where they got wet.  All complaints aside, I was obviously ecstatic to get the boxes.

Quite the lineup.  The new packaging is sharp looking and clearly defines the contents.

Inside these boxes are some of the latest and greatest video cards from Asus.  Having just finished up a budget roundup, I had the bandwidth available to tackle a much more complex task.  Asus sent four cards for our testing procedures, and I intend to go over them with a fine toothed comb.

The smallest of the bunch is the new GTX 670 DC Mini.  Asus did some serious custom work to not only get the card as small as it is, but also to redesign the power delivery system so that the chip only requires a single 8 pin PCI-E power connection.  Most GTX 670 boards require 2 x 6 pin connectors which would come out to be around 225 watts delivered, but a single 8 pin would give around 175 watts total.  This is skirting the edge of the official draw for the GTX 670, but with the GK104 chip being as mature as it is, there is some extra leeway involved.  The cooler is quite compact and apparently pretty quiet.  This is aimed at the small form factor crowd who do not want/need a overly large card, but still require a lot of performance.  While the GTX 700 series is now hitting the streets, there is still a market for this particular card.  Oh, and it is also overclocked for good measure! 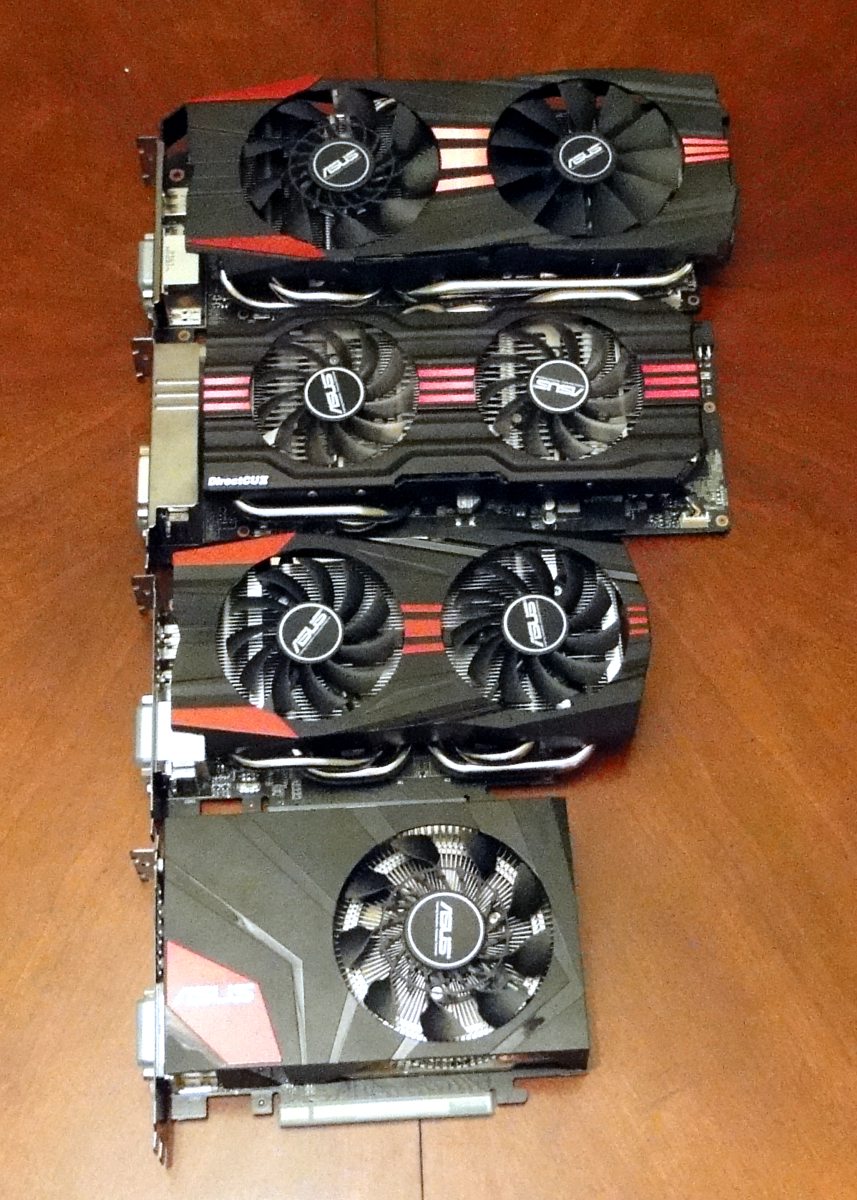 We see a nice progression from big to little.  It is amazing how small the GTX 670 DC Mini is compared to the rest, and it will be quite interesting to see how it compares to the GTX 760 in testing.

The second card is the newly released GTX 760 DCII OC.  This is again based on the tried and true GK104 chip, but has several units disabled.  It has 1152 CUDA cores, but retains the same number of ROPS as the fully enabled chips.  It also features the full 256 bit memory bus running at 6 Gbps.  It has plenty of bandwidth to provide the card in most circumstances considering the amount of functional units enabled.  The cooler is one of the new DirectCU II designs and is a nice upgrade in both functionality and looks from the previous DCII models.  It is a smaller card than one would expect, but that comes from the need to simplify the card and not overbuild it like the higher priced 770 and 780 cards.  As I have mentioned before, I really like the budget and midrange cards.  This should be a really fascinating card to test.

The next card is a bit of an odd bird.  The GTX 770 DCII OC is essentially a slightly higher clocked GTX 680 from yesteryear.  One of the big changes is that this particular model foregoes the triple slot cooler of the previous generation and implements a dual slot cooler that is quite heavy and with a good fin density.  It features six pin and eight pin power connections so it has some legs for overclocking.  The back plate is there for stability and protection, and it gives the board a very nice, solid feel.  Asus added two LEDs by the power connections which show if the card is receiving power or not.  This is nice, as the fans on this card are very silent in most situations.  Nobody wants to unplug a video card that is powered up.  It retains the previous generation DCII styling, but the cooler performance is certainly nothing to sneeze at.  It also is less expensive than the previous GTX 680, but is faster. 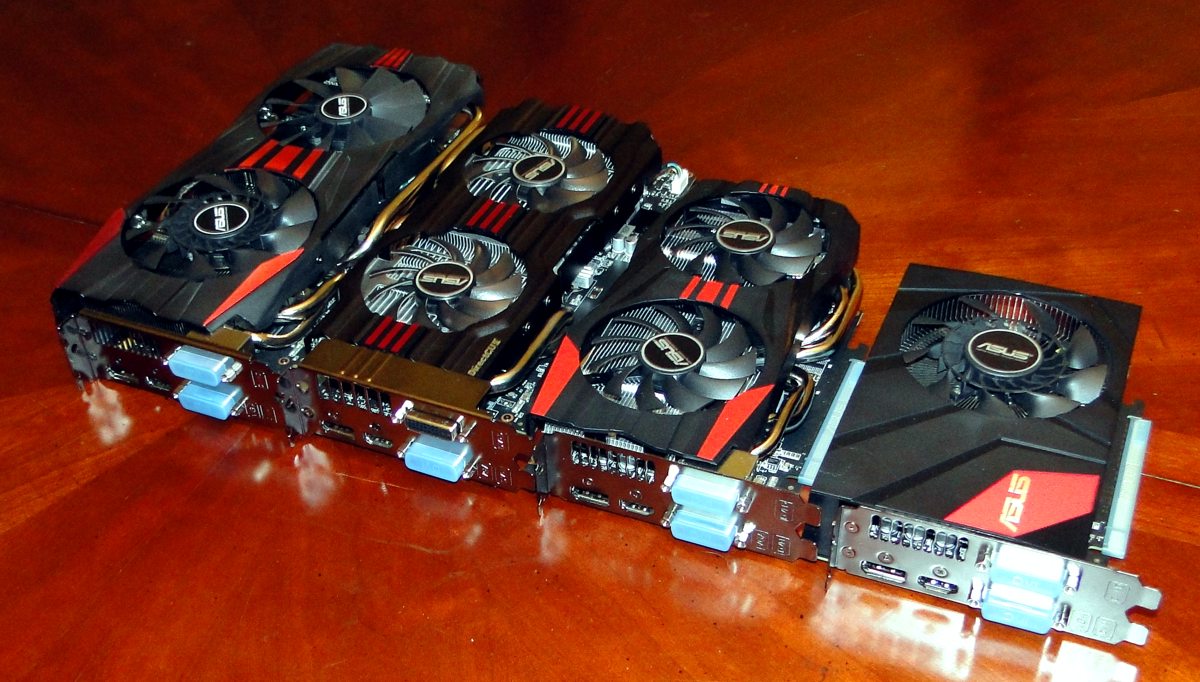 All of the cards sport dual DVI, DisplayPort, and HDMI outputs.  Both DVI ports are dual-link, but only one is DVI-I which can also output a VGA signal with the proper adapter.

Finally we have the big daddy of the GTX 700 series.  The 780 DCII OC is pretty much a monster card that exceeds every other offering out there, except the $1K GTX Titan.  It is a slightly cut down chip as compared to the mighty Titan, but it still packs in 2304 CUDA cores.  It retains the 384 bit memory bus and runs at a brisk 6 Gbps for a whopping 288.4 GB/sec of bandwidth.  The core is overclocked to a base of 889 MHz and boosts up to 941 MHz.  The cooler on this is massive.  It features a brand new fan design for the front unit which apparently can really move the air and do so quietly.  Oddly enough, this fan made its debut appearance on the aforementioned GTX 670 DC Mini.  The PCB on the GTX 780 DCII OC is non-reference.  It features a new power delivery system that should keep this board humming when overclocked.  Asus has done their usual magic in pairing the design with high quality components which should ensure a long lifespan for this pretty expensive board. 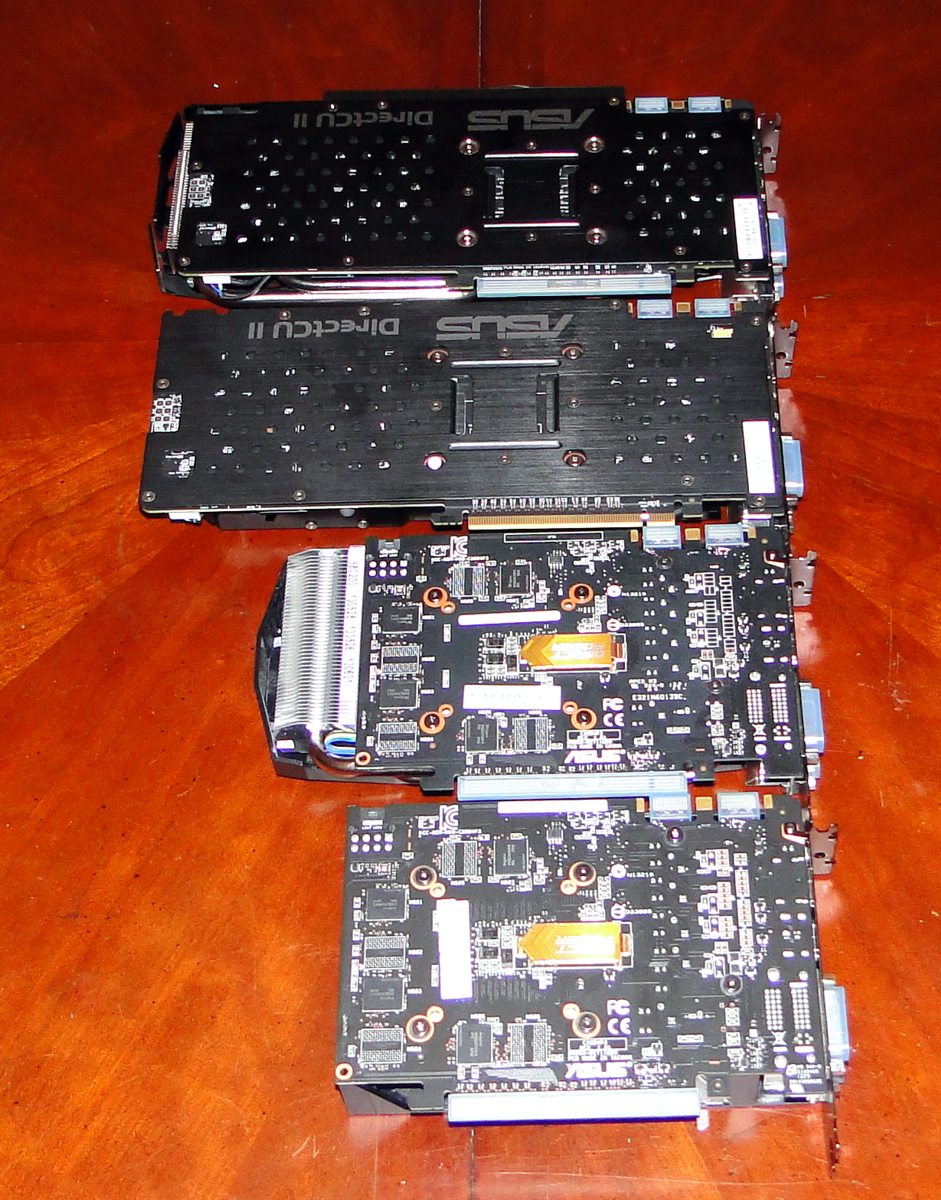 I do like the protective plates on the backs of the bigger cards, but the rear portion of the two smaller cards are interesting as well.  We will delve more into the "Direct Power" functionality in the full review.

I am already well into testing these units and hope to have the full roundup late next week.  These are really neat cards and any consumer looking to buy a new one should certainly check out the review once it is complete. 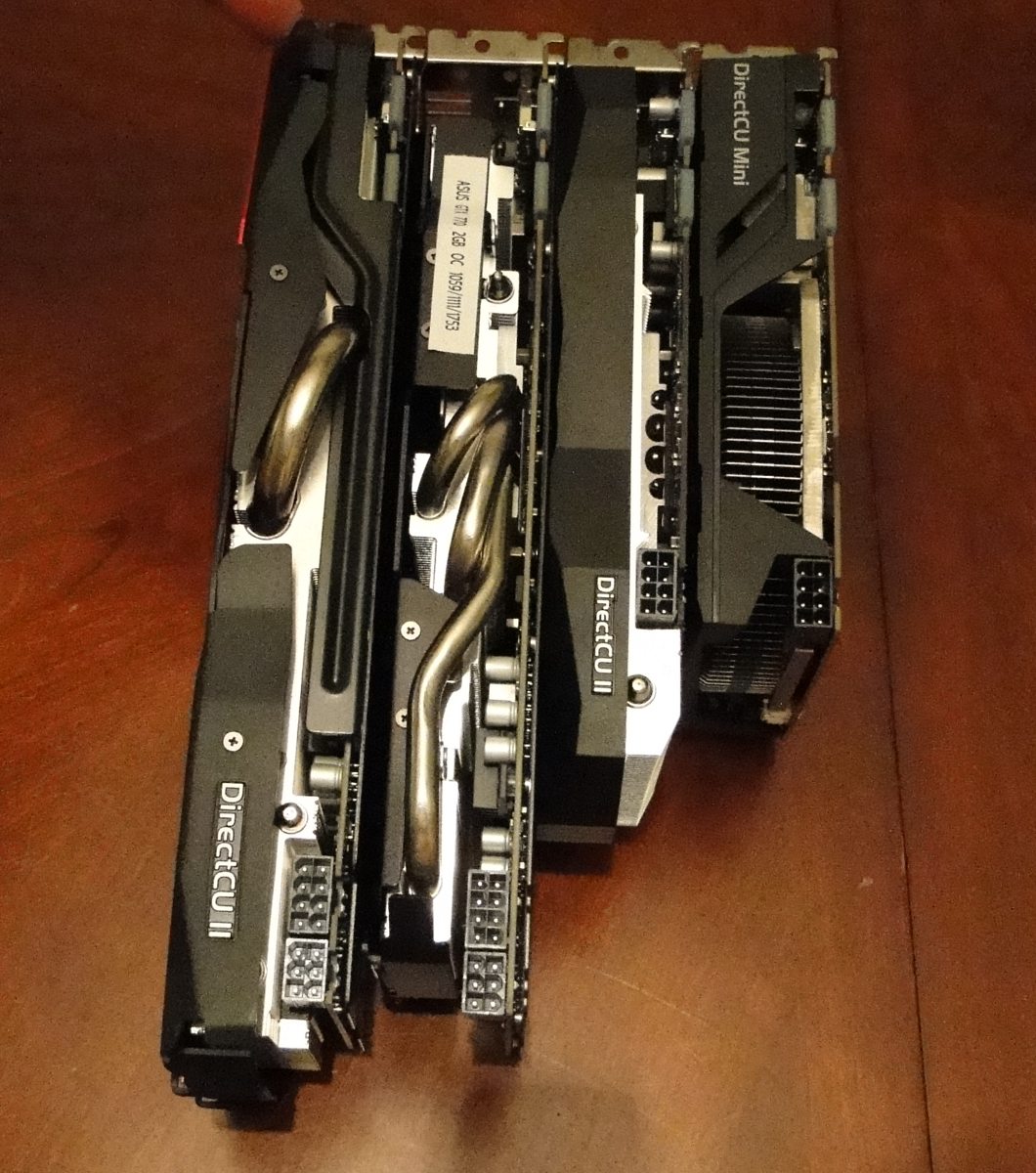 Asus has gone past the "Superpipe" stage with the GTX 780.  That is a 10 mm heatpipe we are seeing.  All of the DCII series coolers are robust, and even the DC Mini can dissipate a lot of heat.