It should come as no surprise to our readers that we at PC Perspective have been big fans of what AMD has been doing with game bundles over the last year.  With the start of the Never Settle campaign in October of 2012, AMD began down a path to help sell Radeon cards with amazing game bundles and pack ins that NVIDIA and its GeForce brand still have yet to match.  It was an amazing move for a company that really wanted to drive sales and gain market share in the discrete graphics space.

Fast forward to today, past the Never Settle Reloaded and Never Settle Level Up campaigns and AMD has another offer for gamers looking to upgrade their GPU: Never Settle Forever.  The crux of this new campaign is choice.  AMD is allowing gamers to select the free game or games they get out of a curated list rather than having AMD select them for you.

Depending on the card you buy and the tier it falls in, you'll be able to select 1, 2 or 3 games from a list.  There are a few catches though that we need to discuss.  First, the game list for each tier is NOT the same. 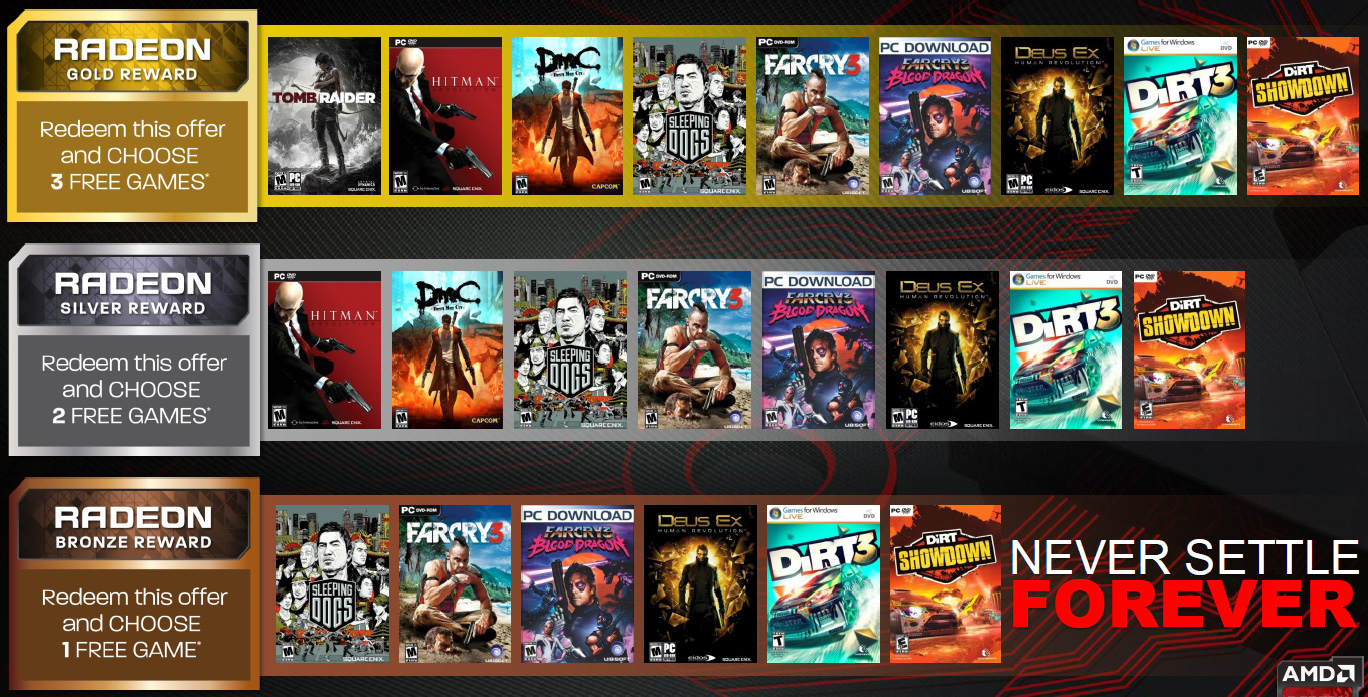 For example, Tomb Raider is only avaiable in the top tier.  The currect tier sets work out as follows:

The Radeon HD 7990 is not included on these tiers but it will continue with the "8 free games" bundle for the life of the card we were told.

When you buy a card from a participating retailer you'll get a code that you can then take to AMD's Radeon Rewards website and redemption portal.  You enter your reward code, register yourself and then you get to browse the games in the available packages.  Here are some of the interesting notes:

Not being able to split up your selections is a hard pill to swallow as you means you cannot pick up Tomb Raider today and then plan on getting another title next month; if Tomb Raider is gone when a new game is added you will not have access to it.  There is likely no techical reason for this restriction other than publisher and business agreements in place with AMD.

It is a letdown that AMD has not included any new games with this bundle refresh.  All 9 of the available titles in the Gold tier have been bundled with AMD cards before.  Even worse, arguably the two best titles from the previous campaign are missing: Bioshock Infinite and Crysis 3.  We do expect other games to be added but AMD would only allude that "new retail games will be added on several occasions" before the end of the year.  Does that mean Battlefield 4, Thief or watch_dogs?  While I can't say for certain I think it is pretty likely.

So where does that leave us with the new Never Settle Forever bundle today?  It's kind of a mixed bag as it stands with the games avaiable in the tiers today getting long in the tooth.  Of the 9 games available in Gold only DMC, Tomb Raider and Blood Dragon were released this year.  Dues Ex and Dirt 3 were released in 2011 and the rest were sometime in that magical year of 2012.  And of those 9 games only two of them are currently for sale for the $49 value (DMC and Tomb Raider) that AMD places on a single game title.  Others can be found for $39 (Far Cry 3), $24 (Hitman) or $14 (Blood Dragon). 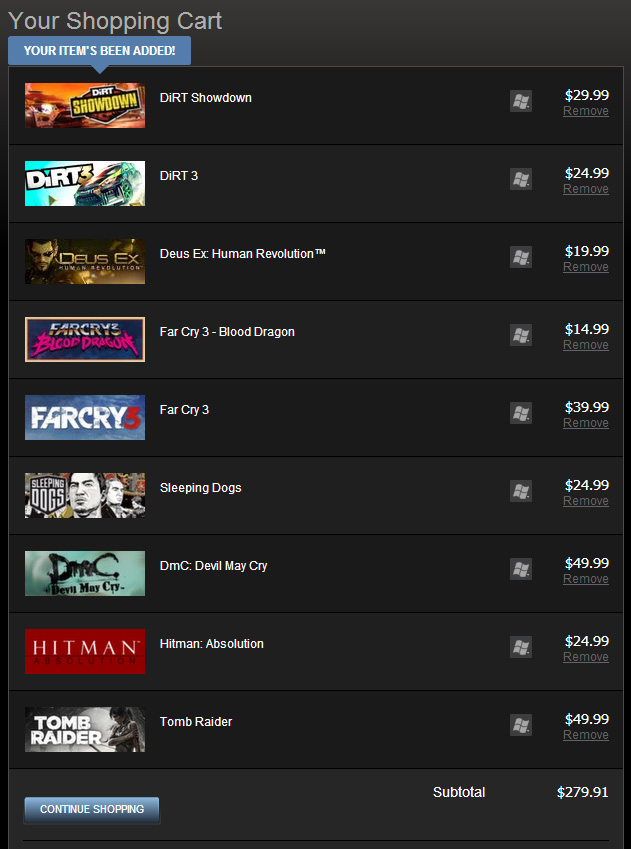 AMD is still the leader in the bundle and add-on battle for discrete graphics cards but this particular launch is a bit less astounding than the previous ones have been.  The upside though is that AMD can now very easily add other games to the mix without having to re-launch the entire program which was obviously the point of this revamp.  So while Never Settle Forever doesn't have me as excited as the original campaign, I have a feeling 2013 holds some very good things for it!