It is very interesting to compare the power consumption of these products, especially considering that GK104 and GK110 are aimed at the highest possible power efficiency in gaming scenarios.  I looped the Unigine Valley benchmark and recorded the highest draw from the wall socket. 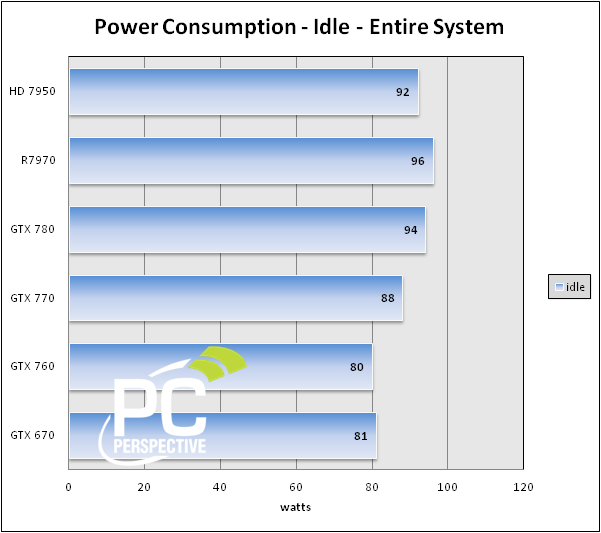 All of the cards do very well at idle with the two largest/hottest units sucking down the most juice.  Once we put these cards under load, then we really see some pretty fascinating results. 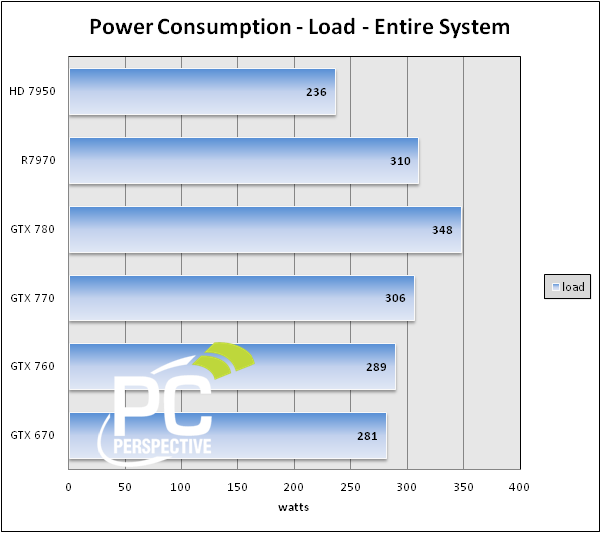 The GTX 770 is very close to the R7970 when it comes to power consumption.  The 780 is the most power hungry of the bunch, but that is to be expected as it is the fastest card in the entire roundup.  The HD 7950 that I have is extremely efficient.  I do not know if this is just a lucky chip, but it is significantly lower than the rest of the group.

Temperature at load is what we are really looking at here.  At idle all of the temperatures are low since the GPUs all downclock significantly.  I loaded up the cards with Unigine Valley again and let them sit in their own stink a while. 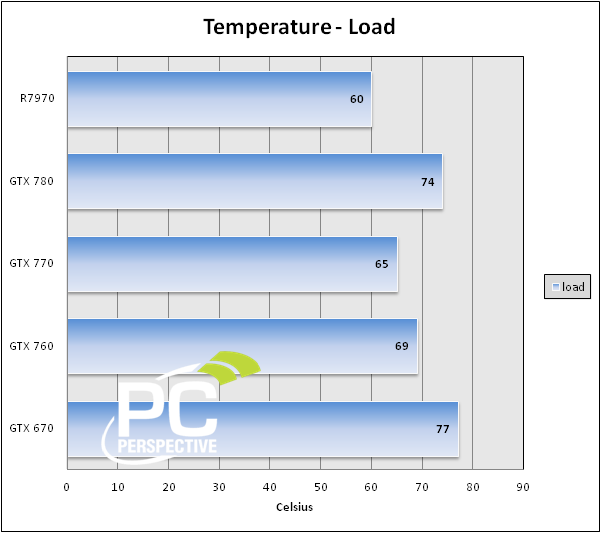 None of the cards crack 80C at load, which is a very positive thing.  Most reference cards run in the upper 80s and can often sound like a wind machine.  The GTX 670 is the hottest card of the bunch, but considering the small form factor and cooling solution, it does pretty well considering.  The GTX 780 is right behind at 74C.  The coolest product in this roundup is unsurprisingly the HD 7950 which also pulled the least amount of power.

In terms of noise, there is very little to report.  There are two small exceptions though.  The GTX 670 does start to spin up and becomes audible outside of the case while under load and at stock clocks.  It gets worse once it is overclocked.  The GTX 770 was quiet throughout testing except when overclocked.  When put under load and overclocked it becomes very audible outside of the case.  The GTX 780 was nearly silent the entire time, and the CPU fan easily drowned out any noise it made.

This part of the review was a bit of an adventure.  The NVIDIA cards could all run their memory at very high speeds, but only when the GPU was not overclocked.  I was able to hit the 7400 mark for most of the boards as long as the GPU was at stock speeds.  Once we started inching up the GPUs, then the boards would become unstable until I lowered the memory speeds.  I tried to figure out the best balance of core and memory speeds that would yield the best performance.

The GTX 760 was my first victim here.  I was able to take this card to 1135 base/1188 boost with the memory running at 7000 MHz.  The stock clocks for this card are 1006/1070 with the memory running at 6000 MHz.  It was nice and stable, and the extra performance showed up in applications quite nicely.  Even overclocked the board did not get all that loud or warm.  It is free performance for the taking.

The GTX 670 DC Mini was next.  It did not overclock as well as the other cards, but it still did pretty good considering its limitations.  The combination of being a GTX 670 (higher TDP) and a smaller cooler somewhat doomed this part to somewhat lackluster overclocking.  The base clock is 928 with a boost of 1006.  I was able to raise the base clock to 1050 with a boost of 1110.  The memory was pushed to around 6400, but no farther.  Not a fantastic overclock, but not bad either.

The GTX 770 was probably the toughest card to overclock here.  I was able to take the memory up to 8000 MHz.  Once I started overclocking the GPU, the memory speed had to be lowered to 7900 MHz.  This is still pretty stinkin fast for the memory onboard this card.  The base 1059/1111 clocks were taken to 1225 base with a boost of 1267.  This is a pretty nice overclock for such a chip.  Performance gets a nice 5% to 7% boost, depending on the application.

The GTX 780 is a bit more of a challenge when it comes to overclocking.  889/941 are the base/boost clocks for this board, and I was able to take it up to 1057/1149.  The board ran very nicely at these speeds.  The memory was taken to 7400 MHz, but that was a pretty hard limit.  Overall it gained a nice bump in performance with those clocks and the board did not overheat or get much louder than when at stock clocks.