The GTX 780 is now NVIDIA’s top “consumer” grade card, after of course the much more expensive Titan.  It is a significant upgrade from the previous GTX 680 and provides performance that is significant jump from the GTX 770 which is around $250 less expensive than the GTX 780.  The GTX 780 uses the same GK110 chip as the Titan, but it has been cut down in terms of functional units.  The upside is that NVIDIA can clock these chips higher and still stay at or below the TDP limits of the GTX Titan. 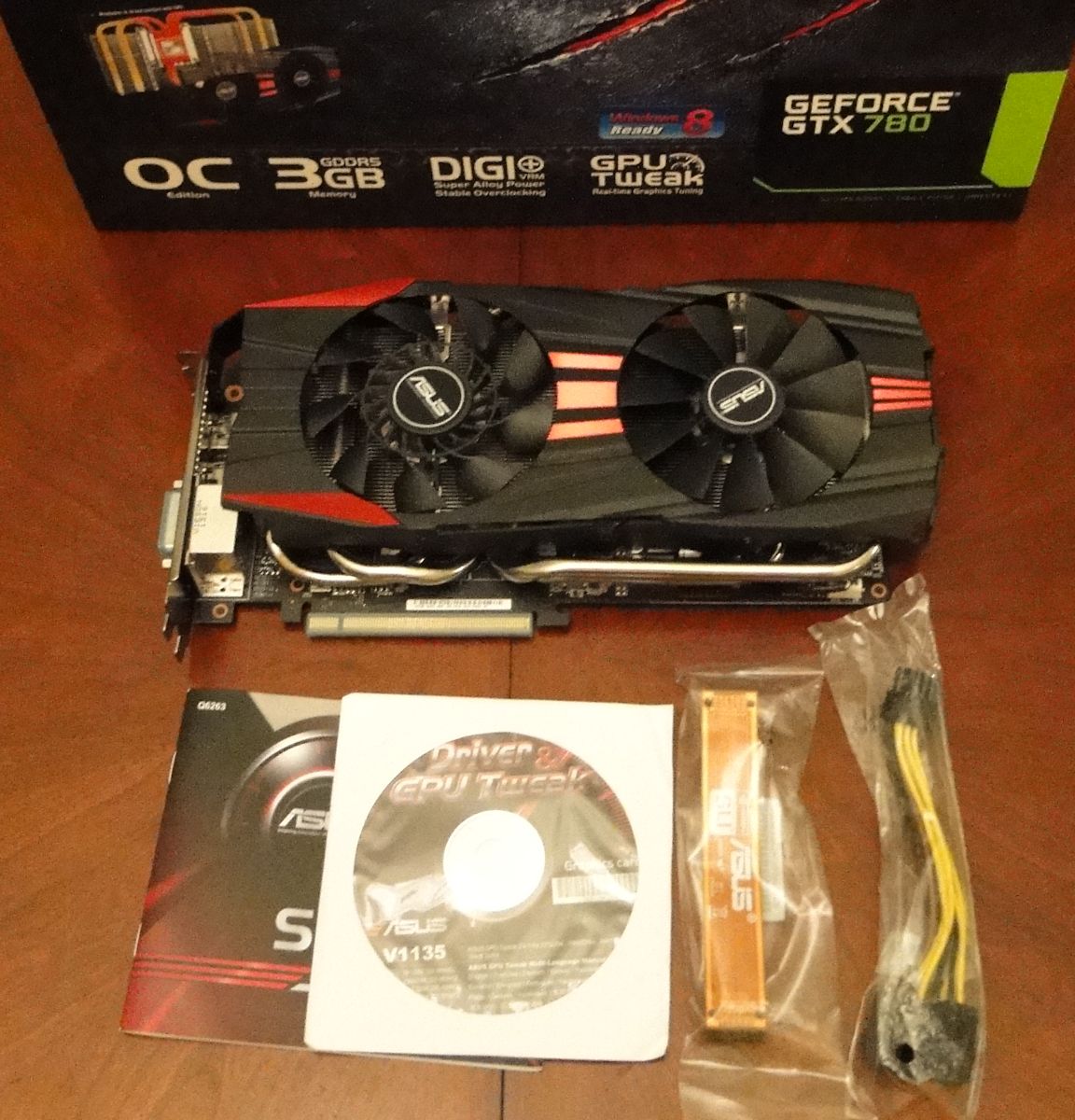 The GTX 780 contains 12 SMX units divided into either 4 or 5 GPCs (Graphics Processing Clusters).  This gives a grand total of 2304 CUDA cores.  Compare this to the 1536 cores of the GTX 680/770 we see that it has a pretty significant jump in computing power.  The reference GTX 780 runs at 863 MHz base with a 900 MHz boost.  Asus clocks this particular number up to 889 MHz base and a 941 MHz boost.  The board has the 384 bit memory bus feeding into 3 GB of memory running at 6 GHz for a total of 288 GB/sec of bandwidth.  Asus decided not to touch the memory clock in terms of overclocking.

Those are the basics, so what does ASUS really add to the mix?  Remember that glaring issue I mentioned above that was fixed by the latest gen of cards?  The previous generations of ASUS DirectCU II cards at the high end all featured triple slot cooling designs.  While the coolers did a very nice job of actually cooling, a lot of people were unhappy with the amount of space needed to fit these cards.  It was somewhat ludicrous really.  Two of these cards in SLI/CrossFire would take up at least six slots, if not a little more.  Inserting any kind of add-on board, whether it be a soundcard, wireless card, or nearly anything else under the sun, it would often simply not work due to space constraints with such large cards.  ASUS has addressed this.  The new GTX 780 DCII is a two slot card, and pretty svelte looking at that. 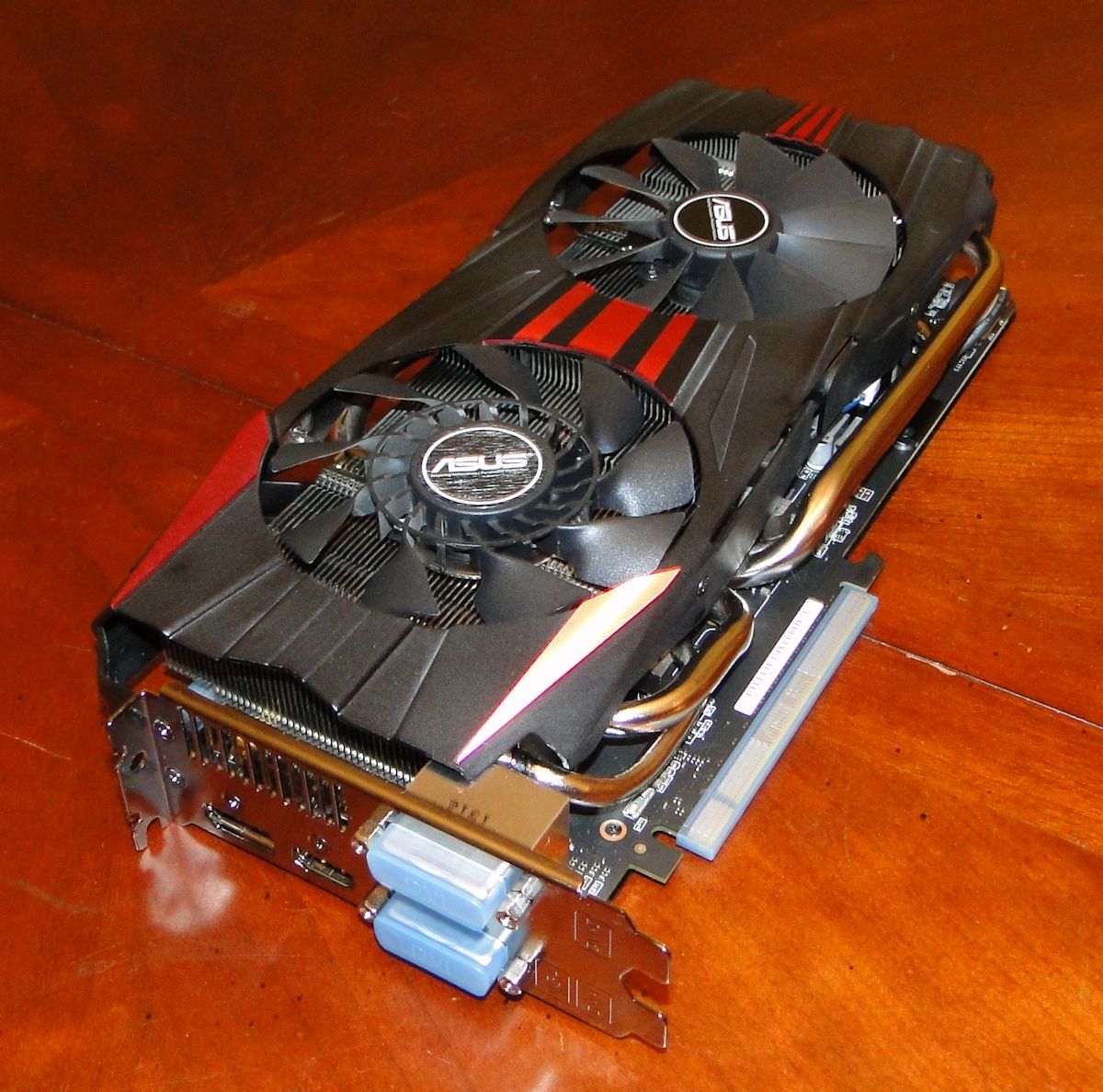 The cooler is one of the first to utilize a large, 10 mm heatpipe.  Heatpipe construction is an interesting thing.  Previously the largest heatpipes were the 8 mm versions that we have seen on other cards, and this was most famously branded “Supah-pipe” by MSI with their cards several years ago.  The problem with large heatpipes is that they are a bit harder to produce, and designs larger than 8 mm had some real structural issues not to mention slightly less efficient at transferring heat.  Through a lot of work ASUS has helped design an effective 10 mm heatpipe that provides superior thermal transfer as compared to 8 mm pipes.  The GTX 780 is the first product from ASUS that will utilize this 10 mm heatpipe.  It also features a total of five heatpipes to help spread the heat around the large number of aluminum fins (1 x 10 mm, 2 x 8 mm, and 2 x 5 mm units).  This is further complimented by a new fan design that resides over the general area of the GPU.  This new “Cooltech” fan features design aspects from traditional blowers and axial fans.  It has the sound characteristics of axials while employing some blower fins to more adequately create turbulence and spread the airflow in multiple directions.  In testing it does look to be a good combination of performance and acoustics.  Both fans feature the dust-proof design that ASUS has been touting for some time, and this again is another positive that will contribute to a longer lifespan for the card.

Is that a 10 mm heatpipe, or are you just happy to be inserted into a PEG slot?

Component choices have always been a big factor in how ASUS presents their cards.  It is also a big selling point for manufacturers who offer more custom solutions as compared to reference designs.  The choices that ASUS has made for one particular area are actually quite interesting.  Why do we always keep coming back to tantalum capacitors?  These particular capacitors have a fun history in website circles, and at one time if a motherboard did not feature tantalum capacitors, it was considered crap.  Most of us have gotten past that stage and we realize that not all scenarios require tantalum capacitors.  What we must realize about these capacitors is that while they perform well and have a long lifespan, there are other units that perform better and last just as long.  Where tantalum caps are really useful is in areas where height requirements are tight.  Otherwise, cheaper poly based capacitors (that are significantly taller) can actually have better electrical properties than a more expensive (and shorter) tantalum based cap.  For example a commonly used tantalum cap may be 100 uF, while a slightly less expensive polymer based cap will provide 300 uF.  Tantalum caps look sleek, but they are not appropriate for every implementation.

Keeping the above paragraph in mind, ASUS utilizes an interesting mix of capacitor types throughout the board.  On the back of the PCB, right behind the GPU, there are some of the flat tantalum capacitors (as height is the overriding concern here).  On the front of the PCB, between the GPU and the PCI-E power connections, we see the usage of higher rated polymer caps.  The board features 8 power phases for the GPU and another 2 phases for the memory.  The combination of component choices is optimized for the overall usage of the board.  There are plenty of caps all around to provide the GPU with a stable and high current flow of power.  This is complemented by the inclusion of “Super Alloy MOS” chips which provide a 10v higher threshold than more standard MOS chips.  We also see the use of the “Super Alloy Chokes” which are pressure formed to improve thermals, power output, acoustics (lack of buzzing), and lower EMI.  The board also uses a digital IC setup, rather than a more standard analog based unit.  We aren’t talking analog like Gypsy Danger.  The Digi+ VRM setup has tighter control over voltage adjustments depending on usage as compared to analog, so theoretically we would expect to see better overall overclocking performance as well as lower power usage at both idle and load. 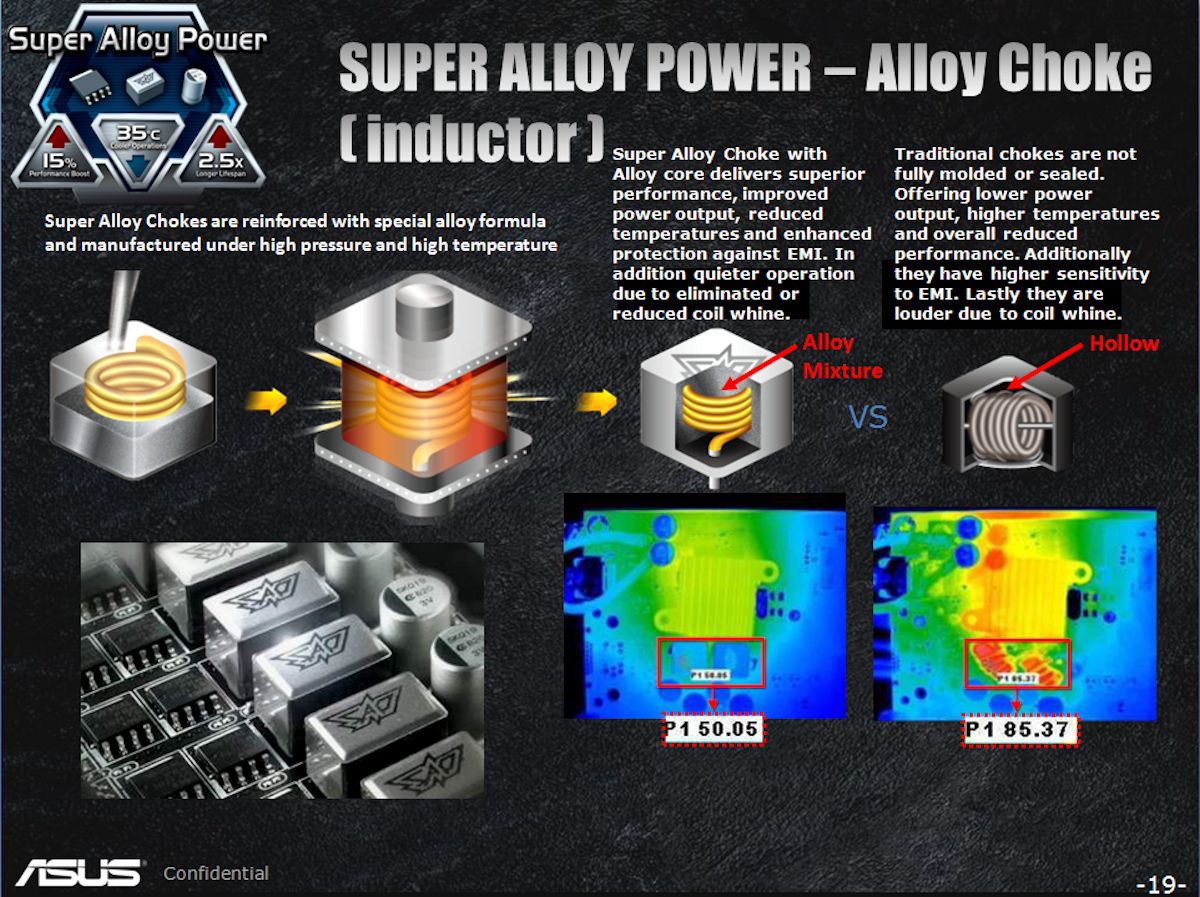 The difference a good choke makes…

There really is no part of the board that is left untouched when compared to the reference design.  ASUS also made many of these decisions with budget in mind.  The GTX 780 DCII is only $20 more expensive than the reference GTX 780 design.  ASUS certainly did not go overboard with this particular product, and the advantages over a reference board are pretty clear.  Longevity, thermals, and overclocking performance will all get a boost from these features that ASUS has implemented.  We may see another high end part along the lines of the “Matrix” style designs that ASUS also implements, but currently the GTX 780 DCII is the top end model from ASUS (not counting the GTX Titan). 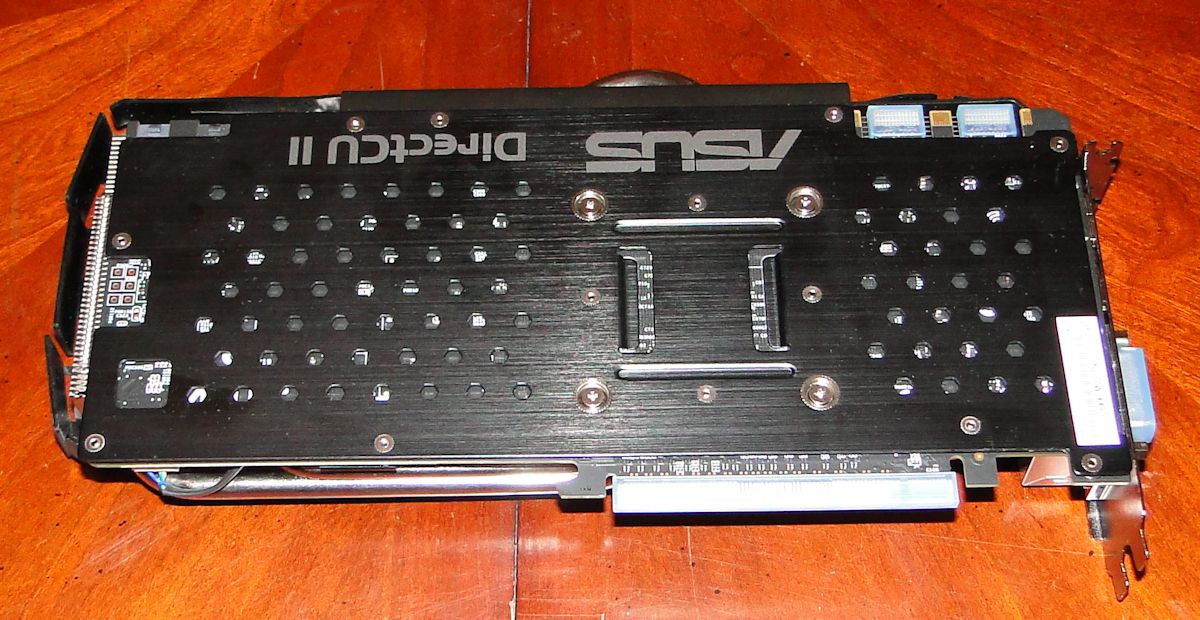 The backplate supports and separates!  Plus looks nice.